The FDA has issued a press statement giving authorization for an E-cigarette to be sold under the new Premarket Tobacco Product Application (PMTA).

While it is good news that the administration has not banned electronic cigarettes ‘by proxy’ outright, the approval still leaves a lot to be desired for several reasons. The FDA has been particularly heavy-handed (and some might say ‘ham fisted’) in its treatment of other applications. The latest decision by the FDA could be a herald of further things to come.

On Oct. 12, 2021, the U.S Food and Drug Administration released a statement giving extensive details of the approval of an electronic nicotine delivery device. This is a milestone for the FDA as, up until this release, no PMTA’s had been approved, with all applicants either flat out rejected or denied.

The approval to market was granted to R.J. Reynolds Vapor Company, a manufacturer and distributor of a closed device marketed under the name ‘Vuse Solo’. The approval encompasses three products, including two types of tobacco flavored nicotine pods and the Vuse solo power unit/

Vuse occupies a lofty position. To date, it is the second most popular vaping brand in the United States. The only brand which markets and sells more is Juul. R.J. Reynolds is one of the ‘big players’ in the conventional tobacco industry, as are the owners of Juul, Altria, the parent company of Phillip Morris.

Speculation and fear have been rife in the vaping community. With accusations that the FDA only ever intended to approve devices and liquids produced by ‘big tobacco’.

Here are some of the reactions to the announcement.

I quit through vaping. Enough said.

Just so its clear, you approved a device and pods for a tobacco company with billions of dollars in reserves. But have not helped or approved anything for small business owners. Your bias for tobacco is very clear.

Whether this is the case remains to be seen. However, considering that the FDA has denied premarket applications for over a million vaping products, it certainly is starting to look that way.

The FDA gave the following justification for its approval: –

“The RJR Vapor Company submitted data to the FDA that demonstrated that marketing of these products is appropriate for the protection of public health”.

“The manufacturer’s data demonstrates its tobacco-flavored products could benefit addicted adult smokers who switch to these products – either completely or with a significant reduction in cigarette consumption – by reducing their exposure to harmful chemicals.”

It should be noted that Vuse Solo did not get away unscathed. The three products approved formed part of a larger application for thirteen products, with ten being denied. Why were they rejected? The answer is anyone’s guess. The FDA cited the reason as “potential confidential commercial information issues”. Strange considering that, had they been approved, any member of the public could have picked one up at the local gas station?

In the release, the FDA gives further justification for its approval. The backbone of the wave of anti-vaping sentiment (and legislation) has been a desire to ‘protect the youth’. One of the main reasons for the wave of marketing denial orders is that the FDA claims the risks of youth uptake of flavored products outweigh the benefits provided to other users.

In this instance, the FDA was resolute that young people were less likely to start using tobacco-flavored vaping products when compared to flavors such as fruit, candy, or mint. It went on to state: –

“These data reinforce the FDA’s decision to authorize the tobacco-flavored products because these products are less appealing to youth and authorizing these products may be beneficial for adult combusted cigarette users who completely switch to ENDS or significantly reduce their cigarette consumption.”

Is the above true? Well, considering that a study by Yale University shows that restricting vaping products leads to an uptake in smoking, it would be intriguing to see where the FDA gets its data.

Approval or Denial. The Real Difference?

It is certainly interesting to consider what the RJR vapor company did that was so different from the one million or so other applications shown the door? The technology used in the approved device is certainly no different than any of the other devices submitted for approval.

Aside from the flavor of the liquid contained within their closed pod system, the constituent ingredients are no different either. When it comes to the flavor itself, the FDA has already proven that it has a weak understanding of the concept.

In the release described above, the FDA goes on to state: –

“Applications for many ENDS and other new deemed tobacco products on the market as of Aug. 8, 2016, were required to be submitted to FDA by Sept. 9, 2020. The agency has taken action on over 98% of the applications submitted by that deadline.”

For ‘taken action’, you can essentially read ‘denied’.

Thankfully there are a few notable exceptions, fighting back, in a list that is continually growing.

The above passage from the FDA’s release involves a little reading between the lines. It may very well confirm smaller vaping manufacturers’ worst fears. The remaining 2% awaiting a decision happen to be:-

The above products are owned by Reynolds American Tobacco, Imperial Brands, and Japan Tobacco Inc… You’ll probably know them by another name, ‘big tobacco’.

Perhaps the most perplexing thing about the FDA’s most recent approval is that both Juul and Vuse and other ‘pod mods’ are the ‘usual brand’ of the overwhelming majority of vaping youths.

This table from the CDC demonstrates a decision that goes firmly against common sense. 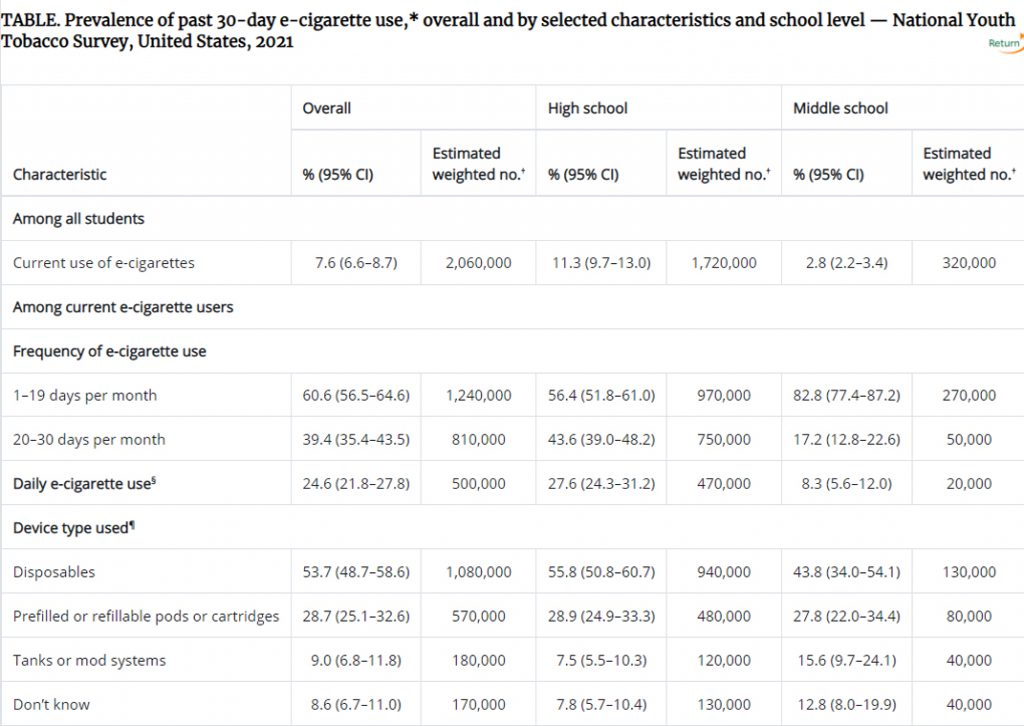 Ironic that “Vuse” is one of them that youth report using the most….

Many of those requesting approval on the FDA’s PMTA pathway are manufacturers of liquids used in ‘open’ tanks and mod systems. According to the above data from a government website, these users are in the minority. Over half (in fact it is 81%) use disposables or prefilled pods or cartridges.

When discussing ‘protecting the youth’ and the associated trumpeting and virtue signaling that litters the FDA tobacco Twitter feed, it must be remembered that RJ Reynolds has been sued for false advertising and in the past had bought ads to appear on the Cartoon Network.

It remains to be seen whether Juul and the other remaining companies will also be granted approval, either total or partial. While approving three products may not seem like such a big deal, it perhaps pays to consider that over a million other applications have been denied.

What makes Vuse so special? They certainly aren’t one in a million regarding risk or providing greater public health benefits than other vaping companies.

Perhaps when the FDA is talking about ‘millions’, the focus should not be on marketing denial orders and the number of products that have been effectively banned from the market. Instead, it is well worth considering other things described in terms of millions. Namely, dollars. Those that have been emptied from people’s life savings in an attempt to appease the FDA, and perhaps those who have given millions, such as RJR, so that their application is worthy of ‘unique considerations’.

After being a smoker for several years, I discovered vaping when a friend bought me a disposable e-cigarette. Since then, I've worked my way up through various devices, becoming an expert in rebuildable tanks, atomizers, and all things to do with vaping. I even make my own e-juice! You’ll find me on the weekend, toolkit in hand, surrounded by box mods, wicks, and wires, trying to get the perfect cloud.