Vaping is often targeted as a direct cause to the increased prevalence of teen and young adults who smoke. Anti-vaping groups will often solely attribute all increases in smoking to the use of e-cigarettes and vapes amongst the youth, despite evidence being available that this may not be the case.

The study was done over a 10-year span, beginning in 2007 and concluding in 2018. The target demographic for the study was young adults ranging from 16 to 24 years of age.

When looking at the statistics, it becomes clear to see vaping has not contributed a role in teen smoking rates. In 2019, approximately 700,000 high school students were listed as current smokers. In accordance with the current misconstrued relationship between smoking and vaping, with an increase in the popularity of vaping, this number should have increased — but it has not. The National Youth Tobacco Survey (NYTS) found approximately 410,000 students to be current cigarette smokers as of 2021. This constitutes only 1.5% of young adults taking up cigarette smoking, which is a record low.

There are a number of reasons for vaping and e-cigarettes being targeted and linked to more harmful tobacco smoking. From misconceptions and misunderstanding of vaping as a whole, to the backing from larger tobacco companies that have seen significant losses from vaping over the years as their once loyal customers have made the switch to vaping.

Despite these attempts to condemn vaping as a gateway to smoking addiction and all of the health implications smoking can cause, studies are showing the link between teen vaping and adult smoking may not be as significant as once believed. Aside from the more pointed reasons for targeting vaping in this way, misconceptions have played a huge role in the negative feedback that vaping and e-cigarette usage have received over the past years. This is regardless of the fact that many in educated positions have been crusading against this demonization in order to promote the tobacco harm reduction (THR) benefits that vaping grants.

THR has been highlighted as one of the most significant benefits vaping has to offer as it has allowed many adults to find a sustainable way to remove traditional tobacco smoking from their lives, subsequently resulting in a decreased risk of the innumerable health risks involved with smoking.

Foulds has been a career-long researcher into THR in order to bring some cessation to the smoking pandemic.

Along with the misconceptions about vaping leading to cigarette smoking, there are numerous misconceptions regarding the health implications of vaping being the same or worse than traditional tobacco smoking. This is where vaping often gets demonized, rather than seen as a benefit to those struggling with smoking addiction.

When evaluating the health implications of vaping in comparison to cigarettes, a UK-based review has found vaping to be up to 95% less harmful than its traditional counterpart. This staggering statistic means the relationship, in terms of health implications, between vaping and cigarette smoking is almost non-existent and should not be used in comparison when arguing for or against either prospect. 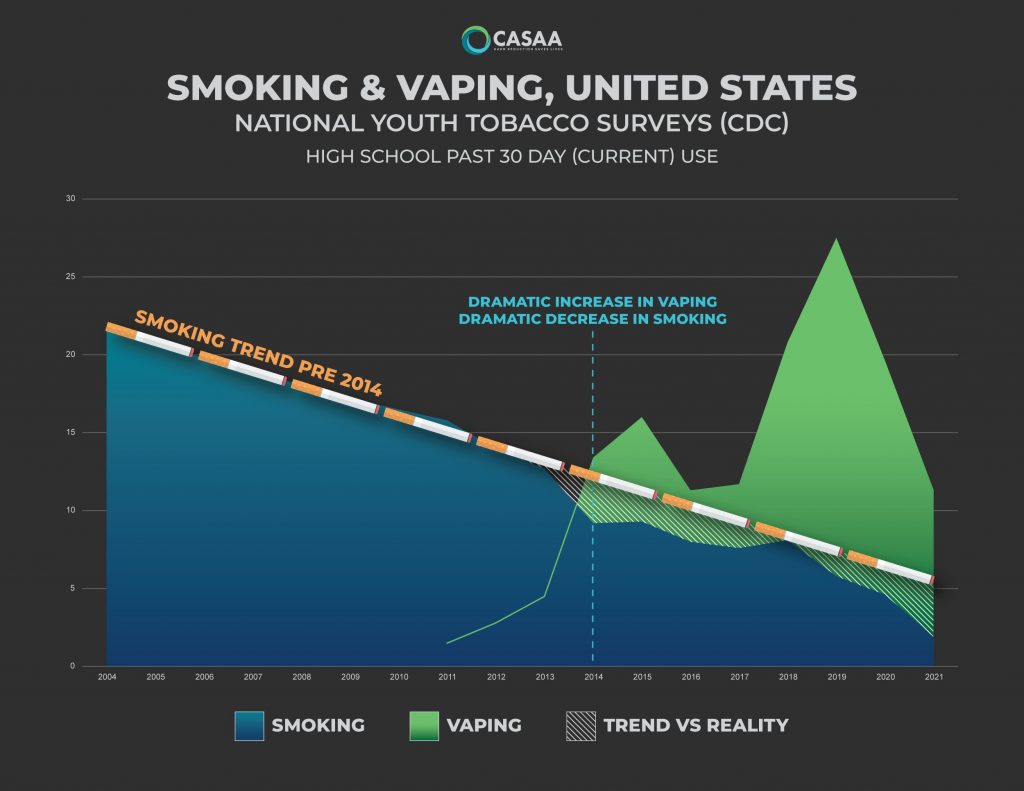 With adequate research it becomes clear that the theory of vaping being a gateway to smoking is unfounded. The Consumer Advocates for Smoke-Free Alternatives Association (CASAA) graphic above clearly shows that the relationship between the two is inverse, rather than proportional. The steady decline in cigarette smoking can be seen as almost completely independent of the uptake in vaping, so it becomes illogical to treat these two matters the same, especially when considering the vastly different magnitudes each poses on our health – cigarettes being the significantly more dire.

Not only does the availability and attractiveness of vaping and e-cigarettes help draw people away from traditional tobacco smoking, it presents an opportunity to keep young adults from ever beginning to smoke in the first place.

The link between teen vaping and smoking in young adults has been one of, if not the, most cited issue by anti-vaping groups. The known harm caused by smoking of traditional tobacco products is often used as an eventual consequence of the usage of e-cigarettes, despite studies showing that this is not the case. It is becoming clear that the link between vaping and smoking in young adults is not nearly as direct as anti-vaping advocates have been referring to. The average number of young adult smokers has been steadily decreasing, reaching a record low of 1.5% as of 2021.

In accordance with studies showing that vaping is not contributing to an increase in traditional smoking, this link between smoking and vaping should be all but refuted. However, with how heavily anti-vaping groups rely on this narrative, it is unlikely that this evidence will be enough to sway the minds of both these groups and the general public.