The Yale School of Public Health has mentioned in a recent study that legislation designed to protect public health has had an undesired effect.

The restriction on the sale of flavored nicotine products was intended to reduce teenage nicotine use. Still, the study suggests that it has, in reality, pushed a generation towards conventional cigarettes. The ban has been introduced in a handful of individual states and is not nationwide.

What Was the Situation Before the Ban?

The author of the study, Abigail Friedman, suggested that 30-day smoking rates were declining or remaining stable. This trend seems to be confirmed in a report by the Truth Initiative, which states that in 2017 the rate of high school students who smoked cigarettes was around 8.8%.

When we look at similar data provided by the CDC in a high school youth risk behavior survey, we can see that in 2019 the rate of youth cigarette smokers was around 6.5%. This was roughly in keeping with the trend around the United States.

Why Was the Vape Flavor Ban Introduced?

The ban has come about due to various sources citing vaping and electronic cigarette use as a ‘gateway’ to smoking real tobacco products. The reasons were given a further push following a small number of deaths in 2019 when there was an influx of poor quality THC oil carts, which caused the EVALI outbreak.

Although it has since been declared that the EVALI outbreak was attributable to vitamin E acetate in THC oil carts, the stigma has still remained and has gathered steam. While in certain states, this has led to a decline in the use of nicotine products, an addictive behaviors report also stated that the flavor ban “may increase cigarette smoking”.

The thinking was that many younger vapers are attracted to the various flavors in vaping products. It is a somewhat understandable position, considering that 82.9% of the youths who used electronic cigarettes vaped liquids with flavor. By restricting the sale of liquids containing flavors, they reasoned that the appeal would no longer exist, thus reducing the uptake of electronic nicotine delivery systems.

However, this has not been the case.

Considering that one of the chief supporters of the ban has been “The Campaign for Tobacco-Free Kids”, it could be said that they have ‘scored an own goal’ by giving the younger generation few alternatives to smoking.

Where is the Ban Currently Enforced?

The ban on flavors has taken place in 5 states and hundreds of localities.

It was introduced in November 2019 in Massachusetts. It was swiftly followed in 2020 by New Jersey, New York, Rhode Island, and eventually California.

In addition to the above states, certain localities in Minnesota, Montana, Pennsylvania, and Colorado also implemented bans with similar effects.

What Has Been the Effect of the Vape Flavor Ban? 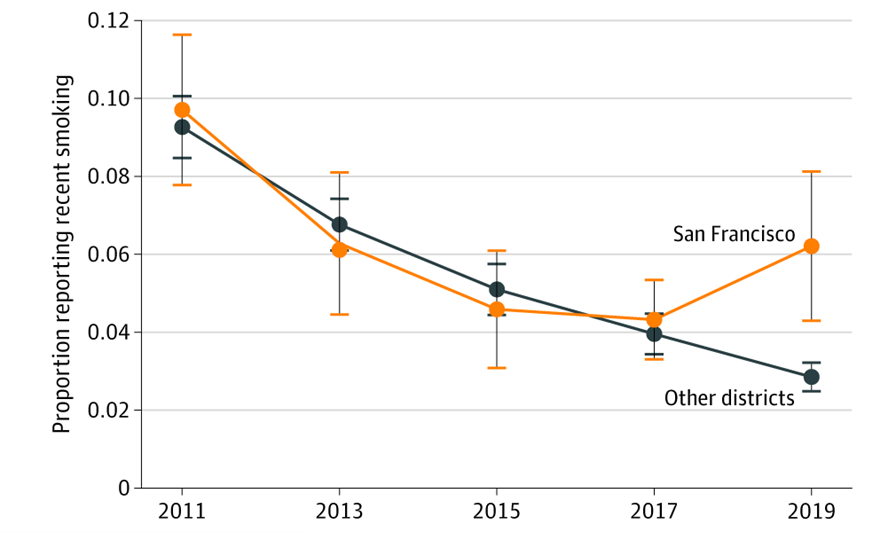 The graph above tells a story. As is evident, other areas have still witnessed a marked decline in the number of people who have smoked in the last 30 days. The yellow line representing San Francisco demonstrates an increase in youth smoking.

The study from which the above graph was taken states that reducing access to flavored nicotine delivery systems may encourage younger people who would otherwise vape to smoke as an alternative.

What are the Implications Going Forward?

A recent bill introduced in Connecticut proposes to restrict the amount of nicotine available in Ejuices and prohibit the use of flavor to produce these products. The bill is set to be enacted on January 1st, 2021.

The results from San Francisco should make the lawmakers and proponents of restrictions stop and think about what they are trying to achieve. While vaping isn’t as healthy as not using any products at all, current studies suggest that it offers significantly less danger than smoking.

There are exclusions granted in the bill. For instance, it states that ‘modified risk tobacco products’ will be exempt. So far, the only product which has ever been granted this designation has been snus produced by Swedish match. Snus is a small pouch of pasteurized tobacco held between the gum and cheek.

The above should highlight that policymakers need to reconsider and proceed with great caution. While it is admirable that they should try and prevent future generations from taking up smoking, it seems backward when presented with the above data.

There are numerous examples of using electronic cigarettes as a way to prevent smoking. So much so that the National health service in England actively states that vaping can “help you quit smoking for good”.

The upshot might be that more and more people return to smoking conventional cigarettes, especially if they rely on electronic nicotine delivery devices as a substitute. Ultimately this will cause more harm than good, as the dangers of smoking are very well known.

As an additional downside, as times of prohibition have proved, banning a product doesn’t always make it unavailable. Instead, the product is simply driven underground to grey or black markets.

This is harmful because, by existing in these markets, regulators lose any say over the quality and safety of such products. As the recent EVALI crisis demonstrated, the most dangerous situations exist when a product is created without any form of quality control and checking.

Are there Alternatives to the Ban?

Professor Friedman states that an alternative would be extremely effective in reducing youth nicotine use while preventing a return to smoking conventional and highly harmful cigarettes.

Her solution is simple, effective, and would work well.

She suggests that the law should be amended to restrict the sale of any tobacco-related product to anyone under the age of 21. This would achieve the following: –

The above solution would be elegant and effective. Suppose you can’t buy cigarettes in the first place. In that case, you simply can’t use them as an alternative to smoking electronic cigarettes.

The solution could work to good effect. After all, it works very effectively to prevent the purchase and use of alcohol in many states. However, as with both the age restricted products of cigarettes and alcohol, young people have often devised ways to acquire them regardless of the age restrictions. It doesn’t make it impossible, however it does make it more difficult.

The evidence from San Francisco seems to show that banning flavored vaping products could be counterproductive if the ultimate aim is health and safety. The dangers of smoking are well documented. While not as ‘pure as fresh air, ’ vaping is significantly the lesser of the two evils. Restricting the age limit for any tobacco-related product could have a similar effect and potentially remove all of the harms mentioned above.

After being a smoker for several years, I discovered vaping when a friend bought me a disposable e-cigarette. Since then, I've worked my way up through various devices, becoming an expert in rebuildable tanks, atomizers, and all things to do with vaping. I even make my own e-juice! You’ll find me on the weekend, toolkit in hand, surrounded by box mods, wicks, and wires, trying to get the perfect cloud.