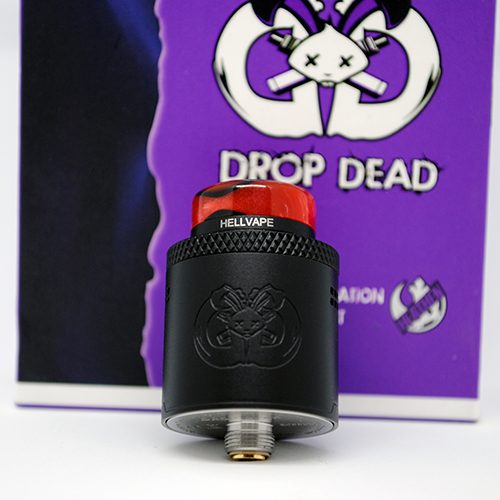 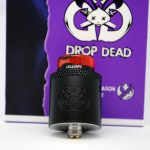 Imagine taking two of the best RDAs currently available and combining their best features into a single, new RDA. Done? Well you can stop imagining, because this is exactly what Hellvape have done with the new Drop Dead RDA. And from the name, it shouldn’t be too hard to figure out which RDAs they’ve combined.

A collaboration between The Vapor Chronicles and Heathen, the Drop Dead RDA takes the best features from both the Drop RDA and the Dead Rabbit RDA to offer an entirely new, yet still familiar, vaping experience. But is the Drop Dead actually any good, or is it just a quick cash grab?

Well, I’ve spent a few weeks testing and reviewing the Drop Dead RDA to find out. In this review, I’m going to go over everything that you need to know about this latest Hellvape, TVC, and Heathen creation.

What’s in the Box 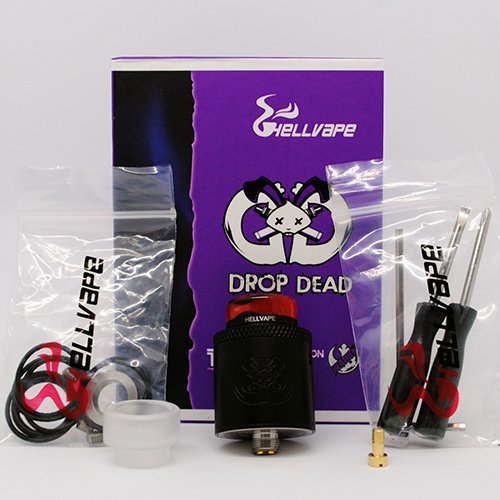 The Drop Dead RDA comes in a small, purple box. This box has the same look and styling as the original Dead Rabbit box, and is also the same size. You get: 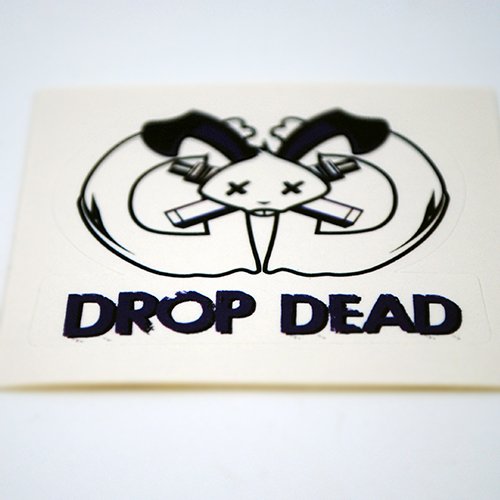 As expected from a collaboration of this caliber, the Drop Dead is extremely well machined. The logo engraving and knurling are precisely etched, and all pieces of the tank are cleanly machine-cut. The paint quality is also a huge plus with the Drop Dead. I’ve had no problems with the paint chipping or flaking. Even after a few drops onto hard surfaces, there’s not even so much as a scratch on this baby.

You get two 810 drip tips with the Drop Dead: one is resin like on the Dead Rabbit RDA, and one is frosted like on the Drop RDA. Very cool. On the resin drip tip there’s a decorative ring that says “HELLVAPE”. This ring goes around the base of the drip tip, and seamlessly blends to appear as one piece. However, this decorative ring will not work with the frosted drip tip.

As mentioned earlier, the top cap on the Drop Dead RDA features knurling, and this makes it very easy to grip. It’s also extremely easy to turn the top cap and adjust the airflow; it works smooth as butter. This is a welcome improvement, as both the Dead Rabbit and Drop have top caps that are a bit of a pain to turn.

But there’s more to the airflow than meets the eye. While the mid cap of the Drop Dead appears to have the same locking top cap as the Drop, this is merely an engraving. However, the Drop Dead does have a unique internal locking mechanism of its own that helps in adjusting the airflow.

Once you have the Drop Dead secured onto a mod, you’re able to twist the mid cap and adjust the position of the airflow holes relative to your coils. This is genius because even if you close off one side of the airflow, you can still reposition the open airflow holes to be centered on your coils. This gives you the ability to restrict your draw while maintaining equal airflow to both sides of your coil, and this makes a big difference in how this tank vapes.

Removing the mid cap will reveal the build deck, as well as the double o-rings that secure the mid cap. These o-rings are great quality and hold the cap snug. Similar to the top cap, the mid cap is also easy to turn.

The build deck on the Drop Dead RDA consists of four posts, seated in a very deep 5mm juice well. The posts on the Drop Dead are the same as found on the Drop RDA, and allow you to easily drop in your leads without pre-measuring. The terminals are also very large, and will allow you to fit two, even three leads in each. The negative and positive posts are also color coded in stainless steel and gold plating, as on the Dead Rabbit.

If you install the squonk pin, it sticks up a bit in the center of the deck. This allows a bit of juice to stay in the juice well after you squonk, and saturate your wicks when needed.

When it comes to design and build quality, the Drop Dead RDA is solid.  Hellvape have thoughtfully taken the best features of two RDAs, and created a masterpiece rather than a mash up.

Building on the Drop Dead RDA 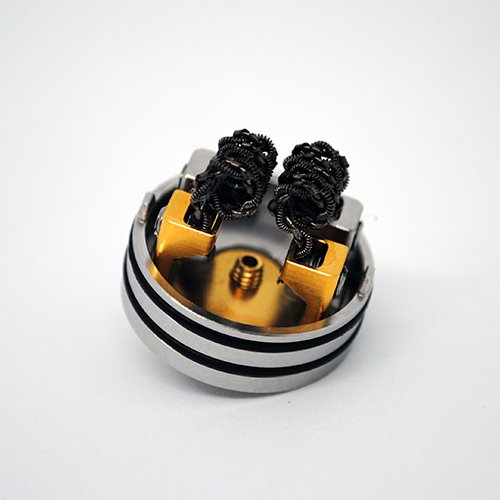 Building on the Drop Dead RDA is a piece of cake, and features the same build deck as the Drop RDA. There are four posts, and the tops of the posts are slanted at an angle. This allows you to simply drop in your leads, and trim them from the bottom afterwards. You’ll want to insert one lead into the gold plated posts, and the other into the stainless steel posts.

The terminals on the posts are quite large, and this will allow you to fit multiple leads into one terminal. You can easily fit 3 or more coils on this deck, if that’s what you’re looking to do. There’s also plenty of room on the build deck to neatly fit your wicks in.

I found that it was best to position my coils more towards the center of the build deck. This made for the best results in terms of wicking and airflow, and therefore flavor.

I’m a huge fan of the original Drop, and thought that its build deck was one of the easiest to use. Seeing as the Drop Dead has the exact same build deck, I’m of the same opinion. It really doesn’t get much easier to build on an RDA than with the Drop Dead. 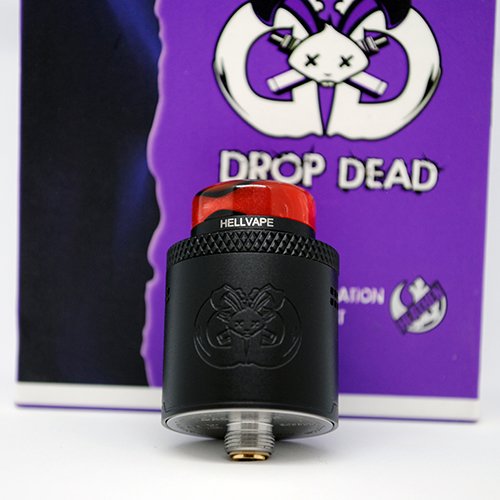 Now for the part that you’re probably the most curious about: how is the vaping performance

At first, I wasn’t sure how good this Frankenstein of a tank would vape. To be honest, I was a little worried that an RDA that looked so good might end up being terrible.

But having used this RDA for a little while now, I can say with full honesty that the Drop Dead is probably the best RDA I’ve used to date. Thanks to the ability to adjust the position of your airflow, I was able to get some very smooth draws. Being able to center the airflow, regardless of how closed off it is, is an underrated feature and definitely a feature that I would like to see in future RDAs.

The twenty-eight small airflow holes give you a wide range of adjustment options, and this allows you to find the perfect airflow setting that you like. Thanks to their size and shape, the Drop Dead makes almost no noise while vaping.

As for flavor, the Drop Dead is pretty incredible and I think you’ll be hard pressed to find a better RDA. Vaping with the airflow holes about a third of the way closed, I was getting dense, warm, and very flavorful hits.

The squonking performance of the Drop Dead is also great, as the squonking pin sticks up a little in the center of the deck. This, combined with the deep juice well, means that squonking is flood and leak free. It also means that a little bit of juice remains in the deck after you squonk, allowing your wicks to be saturated when needed. 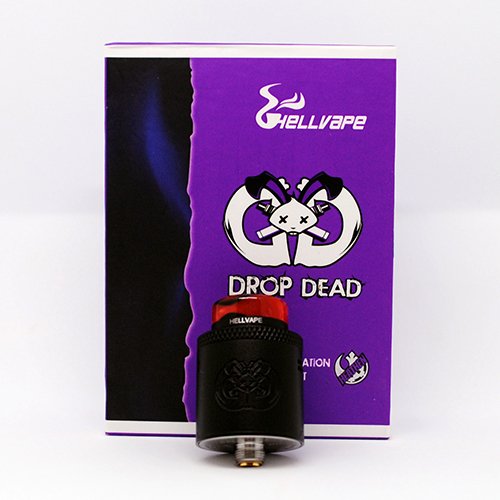 What’s the final verdict on the Drop Dead RDA? It brings the best features of the Drop and the Dead Rabbit to the table, along with a unique airflow that provides smooth draws and amazing flavor. And funny enough, the o-rings are a star feature of this RDA because they allow you to turn the top cap and mid cap without struggling.

In my opinion, there isn’t a single thing wrong with the Drop Dead. Between the build quality, thoughtful features, and amazing performance, I would be lying if I said that it was anything less than perfect.

So if you’re looking for a new RDA, I would highly recommend the Drop Dead. It might just become your new favorite tank.