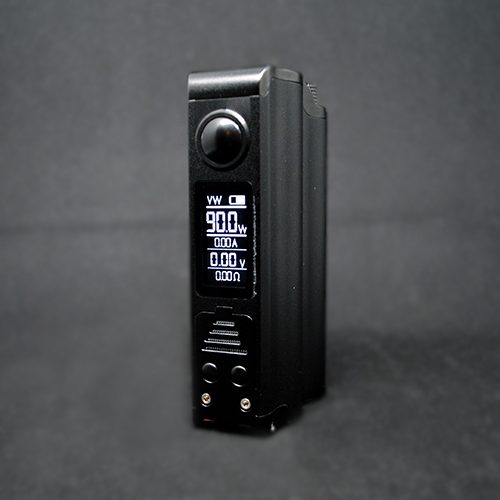 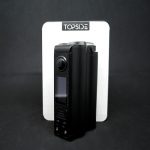 The long awaited Topside squonk mod is finally here. A collaboration between Dovpo and Brian from The Vapor Chronicles, the Topside is a gorgeous, single battery squonk mod that will fire at up to 90W. But this isn’t just any squonk mod — the Topside is the world’s first squonker that can be refilled without having to remove the bottle.

I’ll admit that when I first heard about the top filled squonk bottle, I was skeptical. However, after spending some time using the Topside, I’ve been pleasantly surprised at how well it functions. In this review, I’m going to go over everything you need to know about the Topside so that you can decide if you should get one or not. Let’s start with the box contents.

This item was sent to us by MyVpro for review. This does not in any way affect our opinion or ratings of the device.

The Topside comes in a box that is about as nice as boxes can get. It has an outer sleeve with a picture of the Topside mod, and a plastic box that holds the goodies. This box slides to open, and looks rather fancy. Inside you’ll find: 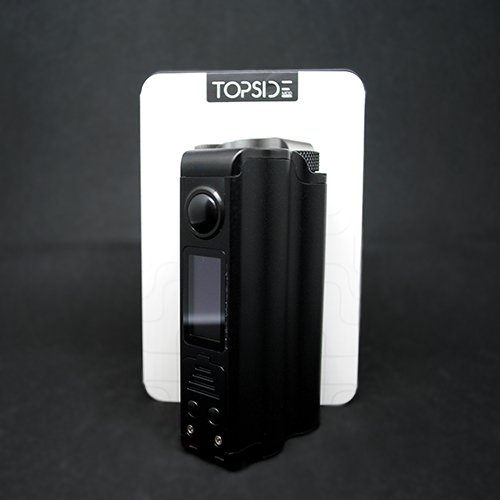 The Topside is a very nice looking squonk mod, and it is constructed of zinc alloy. The device itself is moderately heavy, even without a battery installed, but this gives it a quality feel in the hand. The machining and build quality of the device are also top notch.

The body of the Topside is beautiful, and contours around the battery and squonk bottle compartment. This gives the Topside a curvy shape that is very different from your traditional square box mod, and visually sets it apart from the crowd.

The paint quality on the Topside is also great, and has shown no signs of flaking or chipping. If you know me, you’ll know that I’m pretty hard on my mods, so take this as a really good sign of the Topside’s build quality.

On the top of the mod is some Topside branding as well as the spring loaded 510 connector. But located next to the 510 connector is perhaps the most interesting thing about this device: the top-filled squonk bottle port.

Accessing the top-fill port is very simple. You start by unscrewing the knurled cap. This cap is spring loaded for a snug and leak-free fit, and the threading is very smooth. There are two rubber gaskets on the underside of the cap that seal the squonk refill compartment, and this completely prevents leaking.

After unscrewing the refill cap, it will pop up. Gently pull the cap up and off, and you’re now able to access the fill port. The two fill ports on the Topside are nice and large, and will easily accommodate any size bottle nozzle or dropper.

The squonk bottle on the Topside has a whopping 10ml capacity, which is among the largest you can get on a squonk mod. And not only is it 10ml, but you get two of them!

This second squonk bottle has a metal cap that pushes/pulls on or off, and fits very tight and snug. This second bottle is awesome because it allows you to safely carry it around, and it’s easy to swap it in when your juice is low. This saves you from refilling, even though it’s super easy to do with the Topside anyway.

The squonk bottle can be removed from the bottom of the device, and is accessed by sliding open the battery door. The bottle is on a track system that makes removing or inserting the bottle a fool proof task, and ensures that the internal squonking mechanism lines up properly.

On the squonk bottle itself, at the top of the tracks, there are two screws. These screws can be undone to fully remove the squonk bottle from the housing, and allows you to rinse and clean the bottle thoroughly.

The squonk bottle takes just the right amount of pressure to squonk, and is neither too stiff or too flimsy. Finding a perfect squonk bottle is almost impossible, but I think the Topsides may just be the closest that I’ve found. 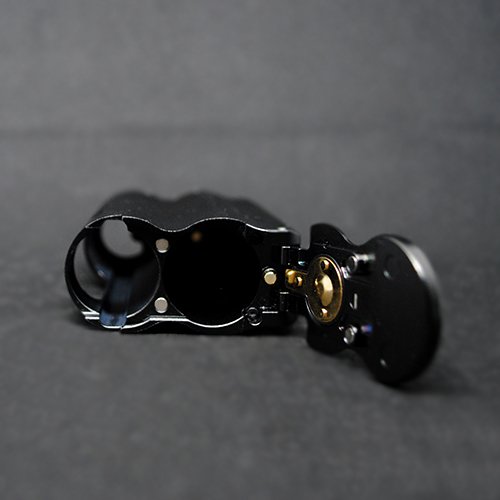 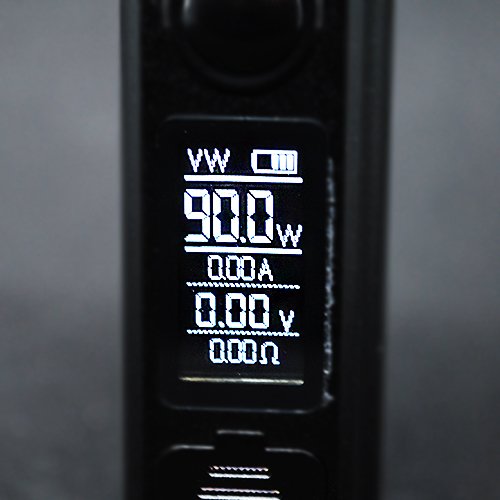 The screen is a 0.96” OLED display. Similar to the Geekvape Aegis, the screen on the Topside is covered by plastic rather than glass. However, this doesn’t affect the clarity of the screen at all, and actually adds to the durability of the device. It also makes it more likely to survive a drop. The screen is crisp and clear, and will display your current mode, battery life, wattage/voltage/temperature, amperage, voltage, and resistance.

There are three buttons: one large fire button, and two smaller adjustment buttons. The fire button is located towards the top of the device, and is round and raised. It also has a raised ring that goes around its perimeter. This is genius because if any juice leaks, it will simply roll off and around the fire button rather than into it. Very thoughtful design. The fire button works flawlessly and is very responsive and the click that you get feels and sounds just right. 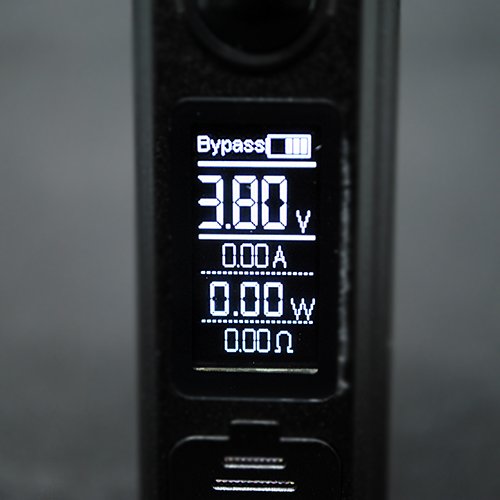 The Topside comes out of the box with two different modes: variable wattage, and bypass mode. In wattage mode, the Topside will fire from 5-90W.

And for all those Temperature Control enthusiasts out there, Dovpo hasn’t forgot about you. Through a firmware update (which you can download from the Dovpo website) you’re able to add Temperature Control mode capabilities to the Topside. Once done, the Topside will support Nickel, Titanium, and Stainless Steel from 200-600F and even has TCR.

By default, the Topside will be in Variable Wattage mode. The screen will display: your current mode, battery life, wattage/voltage/temperature, amperage, voltage, and resistance. 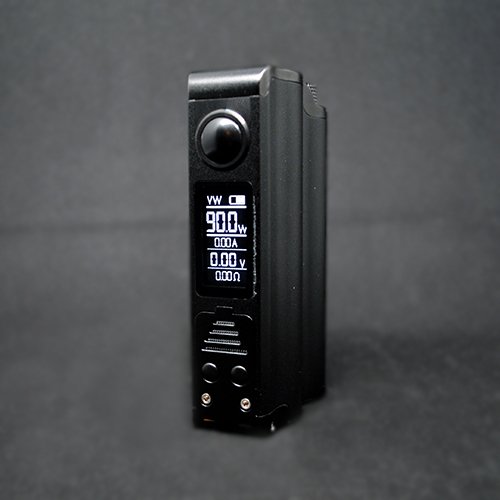 In the performance department, the Topside is a real contender for the best regulated squonk mod available. To start, the fire times are near instant. Once you hit that fire button, you’re getting power.

In both wattage and temperature control mode the Topside performs like a beast. All the way up to 90W, I was getting terrific performance and pretty decent battery life. At around 60W was the sweet spot with a 0.27ohm coil, and I found the battery efficiency was pretty stellar.

Most importantly though, how does this thing squonk? Well you can rest easy, because the Topside is a terrific squonker. The internal squonking mechanism works flawlessly, and I haven’t had a single problem with leaking or clogging, or anything at all. When you squonk, the juice travels easily into the RDA. And that’s about all you can ask for from a squonk mod.

Swapping out for the extra bottle is also super convenient, and really simple. Just unscrew the fill cap, pop open the bottom, and carefully pull the bottle out. Then, take the cap off of your extra bottle and insert it into the Topside. Replace the fill cap and voila! You’re set to squonk again, and it takes less than 20 seconds. It’s also way less messy than refilling or subbing a traditional squonk bottle, that’s for sure.

The performance of the Topside is actually so good, I’m going to make it my daily driver for the foreseeable future. The easy of filling or swapping the bottle, combined with the great battery efficiency and performance make the Topside one of the best regulated squonk mods that I have ever used.

So what’s the final verdict on the Topside? Being totally fair, there isn’t a lot of negative things to say about this mod. The shape and curves of the Topside aren’t the most ergonomic, but some of you may disagree with me. It also only fires up to 90W, and is only a single battery squonk mod. But aside from these small subjective cons, there aren’t any other things to criticize. In my opinion, this is as close as you can get to the “perfect” squonk mod.

The Topside takes away the whole inconvenience of using a squonk mod, and makes it perhaps the most convenient way to enjoy the full flavor of an RDA. So if you’re looking for a regulated squonk mod, check out the Topside. Stay Versed!