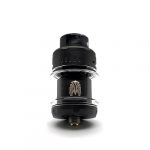 The “T2B” (top to bottom) airflow is still here on the Arbiter 2 but it has been redesigned and implemented here in an interesting way. Basically, the airflow comes in from the top of the tank, goes down two isolated channels, and then passes through the 5 airflow cutouts on each wall of the deck before it hits the sides of your coil(s). We’ll get into how well this works in detail in this review.

This tank was sent to me directly by OXVA for the purpose of this review. However, as always, this does not in any way affect my opinions or ratings of the product. 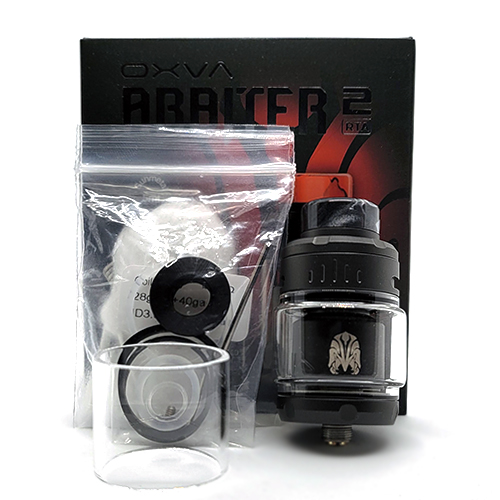 The Arbiter 2 looks very much like the original Arbiter, but it’s now smaller and more condensed. The 24.5mm base diameter sits flush and without overhang on the majority of dual battery mods which is a big improvement from the large 26.5mm base diameter of the original. It’s also much smaller all around, being just 52mm tall including the drip tip, with a 26mm body diameter. All around, this size pairs much better with most of the vape mods available today.

Aesthetically, the Arbiter 2 has also been improved. The sharp ridges on the original have been done away in favor of smoother, more rounded notches that line the top cap and base of the tank. It’s a clean aesthetic that looks modern and cool. Interestingly, the airflow control ring features a pyramid of engraved vertical lines that mimics the airflow cutouts on the deck walls. The entire tank is really well constructed and the machining is perfect.

It’s not only the base diameter that matches well with most mods; the colors do too. I’m using the gunmetal version of the Arbiter 2 and it matches perfectly with my gunmetal Thelema Quest (there’s no overhang either). They look so good together that you would think they came together in a kit. Other color options available are stainless steel, matt black, golden, and rainbow. Each color comes with it’s own unique resin drip tip: green for the stainless steel, red and black for the matt black, gold sparkle for the gold, black and white for the gunmetal, and pink for the rainbow color.

On the topic of the drip tip, I like this one a lot. I have a pretty decent collection of drip tips and I prefer to use one that is short to medium height, with a little bit of thickness for comfort. That’s exactly what this drip tip is. So while it can be changed out, I just continued using the drip tip that it came with. It also comes with a 510 drip tip adapter in the package that you can use if you prefer using a 510, but I myself was happy with the 810.

The top cap is threaded and comes off with a quarter turn. It’s tight enough when closed that there’s no way it’s going to open accidentally, but it’s easy enough to remove it when you want to. Removing the top cap reveals two deep-set fill ports. Even if you miss the fill holes, they are set in a sort of basin that will funnel the ejuice into the fill holes anyway. There’s really no chance of making a mess when you fill this tank.

After entering the top airflow, air is then directed to the sides of the coils through 5 vertical airflow slots which are cut into the build deck walls. These 5 airflow slots are arranged in a pyramid shape with the tallest slot in the center, slightly shorter slots on either side of it, and then the shortest slots on the sides of those. There are also additional airflow holes underneath the coil. This arrangement results in more airflow hitting the center of the coil (side and bottom), and less airflow hitting the outer sides. The center of the coil is where you want the airflow to hit, so even without vaping it, the design already seems like it’s going to result in good flavor.

The build deck is postless with side secured screws and it can accommodate either single or dual coil builds. You get two Ni80 0.40Ω fused clapton, 6 wrap, 3.0mm ID coils included in the box. You also get two agleted cotton strips. There isn’t a lot of room on the build deck so it’s a little tight when installing both of the included coils, but it’s manageable. However, anything larger than two 3.0mm ID coils are not going to fit optimally, if they even fit at all. You’re best to stick with the 3.0mm ID size for dual coil builds. When building a single coil, a single 4.0mm ID coil looks like it will work great.

This is a postless design so there are 4 shallow terminals in the floor of the deck. When I say shallow, I mean it. I first trimmed my coil legs to 5mm and installed them, but they did not seem to be positioned correctly for the airflow to hit properly so I trimmed them to 4mm and they fit much better.

I positioned my coils close together in the center so that the bottom airflow holes would hit them just as well as the side airflow slots. Don’t space your coils too far apart or you’ll be missing out on some of the airflow action. The two coils that come with this RTA come out to 0.17Ω when installed together. 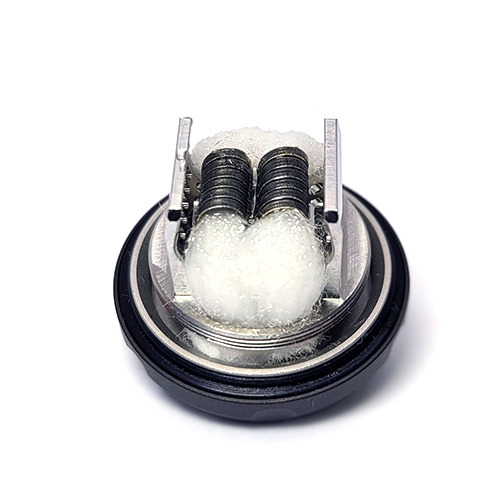 Wicking with this deck is simple and if you’ve wicked an RTA before you’ll have no trouble. It’s actually one of the easier decks that I’ve wicked, but you have to make sure to comb out your cotton because the wicking holes are not very big. You don’t want to be cramming a ton of cotton into the wicking holes and blocking them up or you’re going to encounter dry hits. 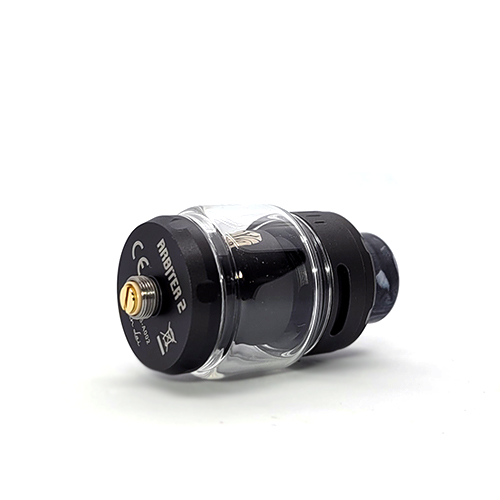 RTAs are not being released like they once were, so it’s always a pleasure to test out a new one. I’m more of a rebuildable guy myself so I’m always on the hunt for the next great tank that really steps up in the flavor department. You’ll want to continue reading for all of the details but as a little spoiler, the Arbiter 2 RTA is a strong contender for the best dual coil RTA that I’ve ever used.

I’ll be honest and say that I did not expect it to be as flavorful as it is, mainly due to it being a top airflow tank. But the way that OXVA designed the airflow path keeps the airflow quiet and really delivers flavor that is comparable to a bottom airflow RTA. I think that this tank really benefits from the airflow being isolated from the rest of the tank, and from the smartly positioned airflow holes that are cut into the deck.

When installed, the two included coils come out to 0.17Ω and I ran them at 75W. You can easily go up to 80W or 85W, but the vapor gets very hot even with the airflow wide open. With the airflow open at 75W it’s a really pleasant vape that checks all the right boxes: flavor, warmth, clouds, and draw.

This almost goes without saying, but the Arbiter 2 doesn’t leak at all. It’s a top airflow tank so there really isn’t really a way that ejuice is going to leak out of the tank. With the flavor being so good, it really doesn’t get much better than this.

All around, the Arbiter 2 is a great RTA. I love the airflow design because it actually enhances the flavor to the point that you forget about it being top airflow. OXVA got the airflow just right here for maximum flavor and leak-resistance, without compromising performance at all. You can build dual or single coil builds and either will perform just as well, just don’t try building dual coils that are larger than 3.0mm ID or you won’t have a lot of space on the deck.

The biggest cons to the Arbiter 2 are the lack of build space, the need for precise coil positioning, and the tricky wicking. Otherwise, this is a solid RTA that has a lot more pros than cons. I can easily recommend picking one up and seeing for yourself how good it is.