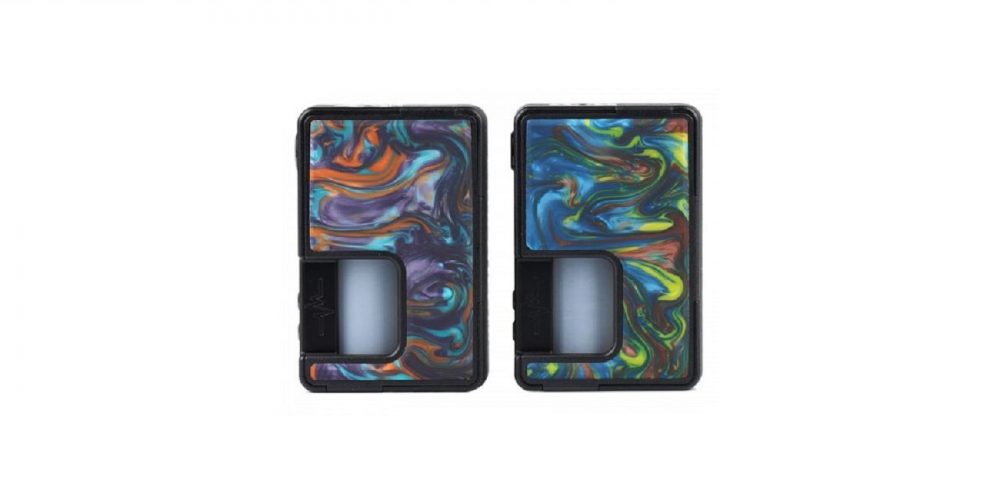 The new Pulse 80W with Gene Chip has had everyone anxiously awaiting its release. All signs were pointing to an early April launch, however some bad news has just surfaced that could possibly delay the release of the regulated Pulse 80W squonker.

The Gene Chip had seen immense success with Voopoo’s own DRAG box mod, and was arguably the main feature that had people excited about the new Pulse. Squonkers would not only be getting a mod by Vandy Vape that they already know and love, but would also be getting Voopoo’s reliable Gene Chip that would fire at up to 80W. It seemed like a match made in heaven.

However, Tony B released a video on March 14th on his YouTube channel to explain what has been going on with the Pulse 80W and unfortunately, he came bearing some bad news. The new regulated Pulse will no longer include Voopoo’s proprietary Gene Chip. Tony B. explained his side of the story and why this would no longer be happening, followed by Voopoo responding. We’ve summarized it all for you down below to save you some time.

Tony B’s Side of the Story 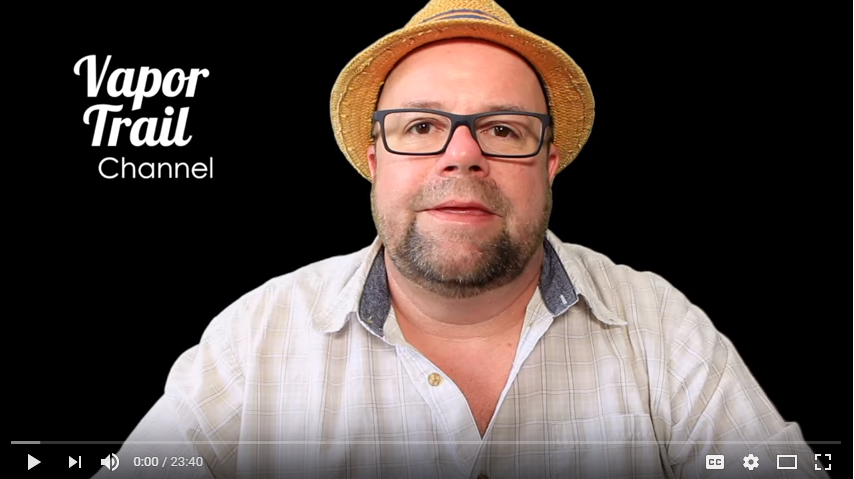 Firstly, When Vandy Vape and Tony B started designing the new Pulse 80W, they had a chip of their own in development that they were planning on using, but Tony B. wanted to use the Gene Chip. Because of this they reached out to Voopoo, and Tony B stated that Vandy Vape and Voopoo secured a contract for 40,000 chips at an agreed upon price. Because of this agreement, Voopoo was given access to the plans and design of the mod.

Then, on the last day of ECC a well known vendor came up to Tony B. This vendor apparently told Tony B. that he should be careful with Voopoo, because he knows at least three other people who have tried to work with Voopoo and at the last minute Voopoo has raised their prices by 15, 20, or 30%.

Tony decided to hope for the best but around Chinese New Year, which was the time that the units were supposed to be delivered, Voopoo apparently came back to Vandy Vape and said that they wanted a 15% increase in price. Vandy Vape agreed but this meant that the Pulse 80W would no longer ship with the refill bottle, in order to keep consumer prices low.

Now, Tony states that him and Vandy Vape had gotten permission to advertise and pre-sell the new regulated Pulse, but after agreeing to the price increase Voopoo stopped responding. Vandy Vape then sent someone out to Voopoo’s factory in order to figure out what was going on, where they were told that everything was fine and thanked VV for complying with the 15% price increase.

Shortly after, Voopoo contacted Vandy Vape again and demanded another 15% price increase to deliver the chips. Still, VV and Tony B. accepted even though they would be taking a large cut in profits.

Tony B claims that he was informed by a reliable source in China that Voopoo are developing their own regulated squonk mod that looks exactly like the Pulse 80W. Thus, Tony claims that this was a malicious tactic by Voopoo, who were trying to raise the price and stall delivery in order to drive the price of the Pulse so high that no one would buy it.

Tony claims that Voopoo noticed all of the buzz surrounding the new Pulse 80W, and decided that it would be better to make a squonker of their own rather than simply supplying the chips to Vandy Vape. Voopoo could simply delay delivery for the Gene Chip until their own squonker is released, at which point they could back out of their deal for the Pulse 80W.

Further, Tony claims that a Voopoo executive stated that the resin panels look too much like the DRAG’s resin panels and that VV was copying Voopoo. Apparently, Voopoo also claims to have a patent on the resin. Tony claims that they are sourcing the resin from the same supplier and offered to use a different company altogether, but Voopoo never responded.

After posting the video, Tony B updated the video description to include the following:

Tony was told that Voopoo may not have “signed” a contract, but that there were many oral, email, and even a direct email to Tony B that stated that Voopoo would deliver the 40.000 Gene Chips. Tony also claims that when Vandy Vape sent someone out to Voopoo’s factory, Voopoo told them face to face that they would provide the chips.

Voopoo Responds to Tony B 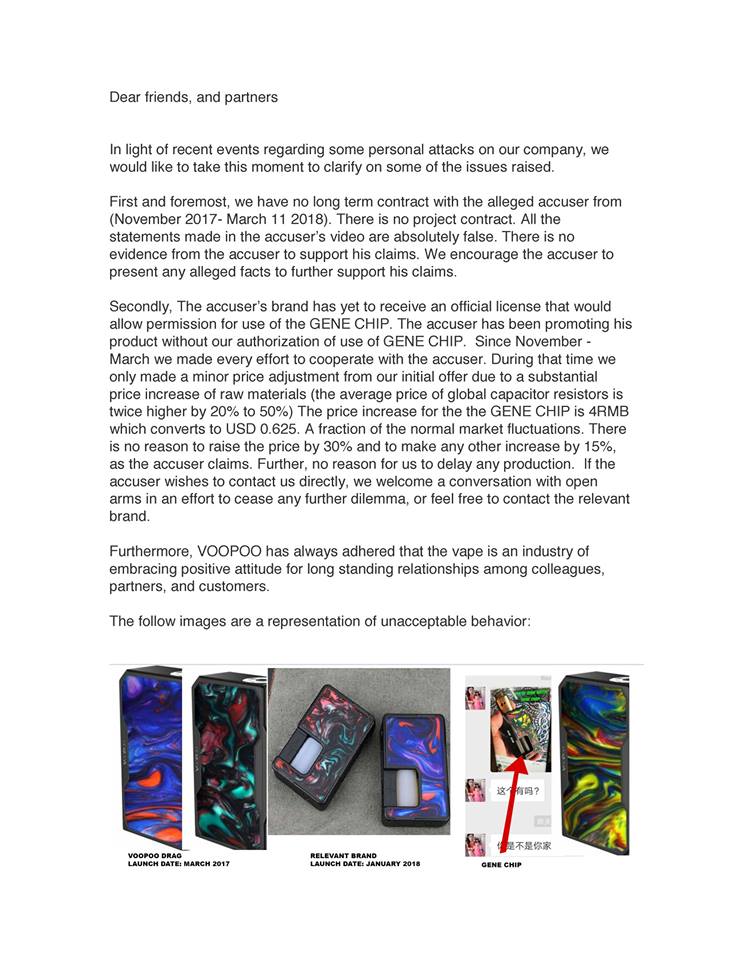 Following Tony B’s video that spread like wildfire(and currently has over 80,000 views), Voopoo quickly responded with a statement on their website. Notably, Voopoo states that they are responding to “personal attacks” on their company and claims that there is not, and never was, a long term project contract with Vandy Vape. This is quite contrary to Tony B’s claims that they had both oral and email agreements.

Voopoo goes on to claim that Tony B and Vandy Vape have yet to receive an official license that would allow them permission to use the Gene Chip. Further contrary to Tony’s claim that Vandy Vape were given permission to advertise and pre-sell the new Pulse 80W, Voopoo states that Tony and VV have been promoting the product without authorization for the use of the Gene Chip.

Oddly enough, Voopoo claims that they never had an agreement to supply the Gene Chip to Tony and VV. However, Voopoo go on to state that since November, they have made every effort to cooperate with VV and Tony and that they “only made minor price adjustment from our initial offer due to substantial price increase of raw materials”. Voopoo goes on to explain that this price increase only amounted to an additional $0.625 USD per chip.

Voopoo states that there would be no reason to raise the price by 15% or 30%, and also no reason that they would delay production. Voopoo ends their statement with pictures of “unacceptable behavior”; pictures of the resin Pulse 80W compared with the Voopoo DRAG.

What Does This All Mean for the Pulse 80W?

Regarding the “contract” that Vandy Vape allegedly had with Voopoo, this has been determined as false. Tony B redacted his statements about the contract, and both him and Voopoo agree that there was no actual signed contract.

Now, the price increase in the chip is where the story is still unclear. Tony claims two separate increases of 15% each, while Voopoo claims that it was 62.5 cents. Regardless, if there was no actual signed contract in place, Voopoo had no obligation to provide anything at a specified cost.

All things considered, and as unfortunate as it is for me to say this, it looks like Tony B & Vandy Vape may be in the wrong here. Keep in mind that Vandy Vape has made no official statement and that Tony B is not an employee for Vandy Vape, nor does VV hold liability for anything Tony says or does. Tony B is completely independent from Vandy Vape.

They began marketing a product without securing the rights to one of its main selling points, which I find foolish. Without a contract, nothing was secured. As unfortunate as it is, even if they did have an oral agreement they should have gotten it in writing.

As mentioned earlier, Voopoo took Tony B’s statement as a personal attack and could very well pursue legal action for slander against Tony B. By stating that Voopoo breached a contract, many vapers were outraged and proceeded to boycott Voopoo products. This includes some high-profile vapers such as the Vaping Bogan, who smashed a Voopoo mod to pieces with a rubber mallet.

From Tony’s statements, it appears that the new regulated Pulse 80W is still scheduled to release near the beginning of April, but with Vandy Vape’s in-house chip instead of the Gene Chip.

If you want to be updated as soon as it’s released, be sure to subscribe to our newsletter! You’ll also be automatically entered into our prize draws and giveaways. Stay Tuned!

Another article that may interest you: