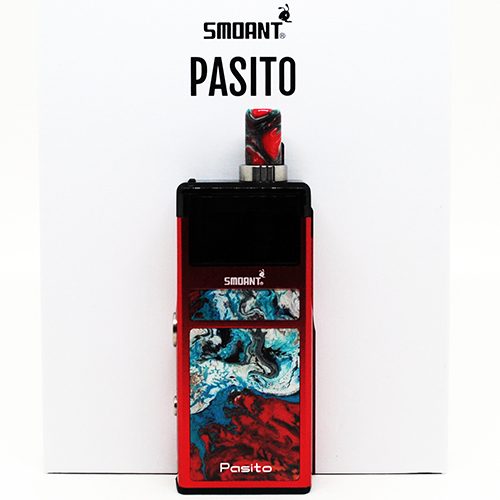 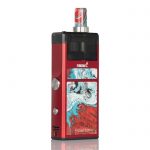 Another pod vape has hit the market! The Smoant Pasito looks a lot like the Orion Q & SMOK Trinity Alpha but it offers a lot more options to better suit individual vaping preferences. It’s got a constant wattage output with five different wattage levels to choose from, adjustable airflow and replaceable coils. It’s also got USB-C charging for quicker charge times, a 3ml pod capacity and a threaded top cap for filling.

Out of the box, the Pasito comes with a 0.6ohm mesh coil meant for DTL and a 1.4ohm coil meant for MTL. But the most interesting feature of the Pasito is that you can purchase a rebuildable deck and install your own coils. This is the first mass-marketed pod system to do so and it definitely piqued my interest.

I’ve been using the Smoant Pasito for a few weeks and in this review I’m going to go over everything you should know. 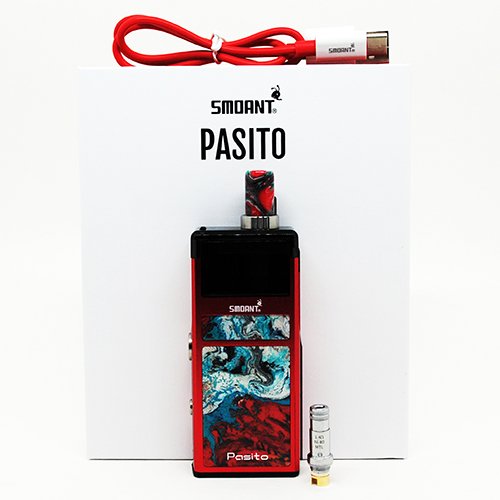 The Smoant Pasito comes in one of the fanciest boxes I’ve seen. It’s magnetically closed and opens up like a book. The inside has a sheet printed with the same pattern as the mod . It opens up from the center like double doors to reveal the box contents. Once I saw this, I was impressed already.

The Smoant Pasito is 102mm tall and 38mm wide. This makes it bigger than most pod vapes but still not nearly as big as a box mod. The size makes it comfortable to hold and it feels solid too, despite being relatively light.

It’s got a tall, rectangular shape that is eerily similar to the Lost Vape Orion Q, SMOK Trinity Alpha and numerous other pod vapes that have been released recently. It’s not a unique form factor by any means. What is unique is the design. I got the red color and the metallic paint is beautiful. It’s got a nice shine to it and it’s held up well without any scratches or scuffs. It also repels fingerprints so it keeps a clean aesthetic while you use it.

The resin-like panels are also gorgeous. They aren’t actually resin but rather CPR plates. These plates also stay fingerprint-free and are resistant to wear. I think that the panels on this red device are the nicest of the four available. It looks sort of like an aerial shot of a desert and ice landscape.

A nice touch is that the drip tip on the Pasito matches the design of the panels. It’s a narrow and tall drip tip that is comfortable to vape on. It’s about the size of a 510 drip tip.

There are two buttons on the side of the Pasito. The firing button is the larger of the two. It’s a metal button with rings etched into it for grip. It’s got a little bit of wiggle to it but it’s nice and clicky. It also takes just the right amount of force to activate it so it won’t fire accidentally in your pocket.

The placement of the fire button on the device is a little low so you have to hold the device up with your ring finger if you want to use your thumb. Otherwise, you have to fully grip the sides of the device. You can also use your index finger. In any case, this means that you can’t palm the device and vape on it at the same time.

The smaller button is for setting the wattage. There’s an LED indicator on the front of the device with 5 LEDS, each one representing a different wattage setting. These are 10W, 13W, 16W, 20W & 25W. You can click the wattage button once to display your wattage setting. If you click it again it will cycle through the five wattages.

The pod for the Pasito appears massive but it’s got a max capacity of 3ml. I was expecting it to hold more when I saw the size of the pod but upon closer inspection, only half of the pod holds eliquid. The bottom portion of the pod accommodates the base of the coil and is designed to let airflow through.

The pod has a dark tint and this makes it hard to see your ejuice level. You have to hold it up to the light in order to check. On the bright side, you can do so while the pod is installed.

The pod attaches magnetically to the device using a track system. Let me just say, the magnet is impressively strong. It pulls the pod along the track with enough force to make me confident that it isn’t going to accidentally detach. Once the pod is attached there’s no wiggling of any sort and the pod sits in the device snugly and securely. 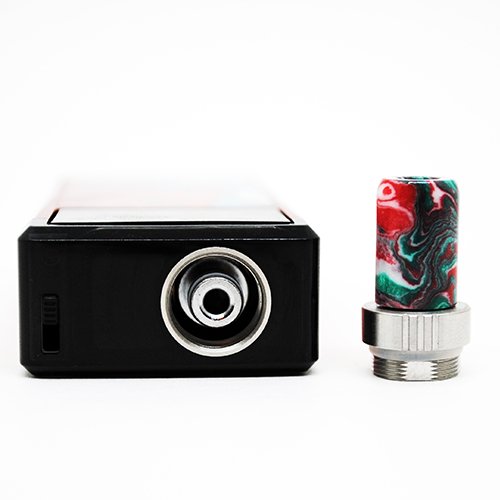 The drip tip on the pod doubles as the fill cap. To access the fill port you just have to unscrew the drip tip from the top of the pod. The chimney in the center of the port doesn’t give you a lot of room to fit your bottle tip though so you have to be careful when filling. I had a hard time fitting dropper bottles without making a mess. It is doable if you take your time though.

The Pasito uses replaceable coils. You get two coils included in the box:

You can also purchase the RBA coil separately if you want to build your own coils. I haven’t gotten a chance to get my hands on the RBA coil yet but I will update this review as soon as I do.

Both coils wicked well with 50/50 regular nic ejuice and 70/30 nic salt ejuice. I also had absolutely no leaking with either coil. 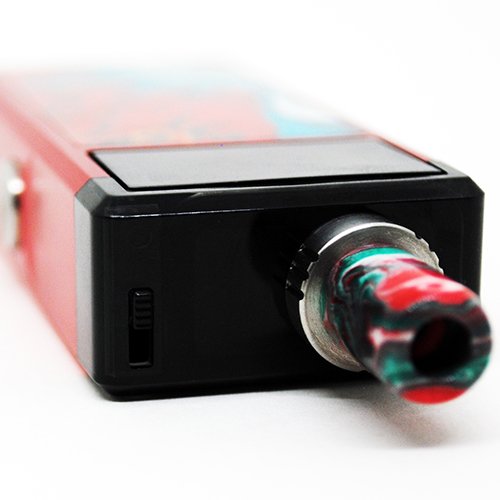 There’s a small switch on the top of the pod that can be used to adjust the airflow. There isn’t a lot of room to adjust it though. I wish there was more play in the airflow because although it is adjustable, it doesn’t give you a very big range to work with.

With the 1.4ohm coil its an airy MTL draw with the airflow open. Closing the airflow fully results in a slightly restricted MTL. It’s not a tight MTL though. Keep this in mind if you’re seeking a very tight and restricted hit. 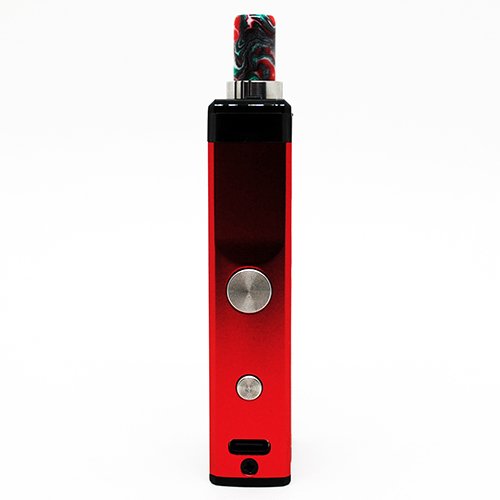 The Pasito is regulated by the ANT chipset. It’s got an 1100mAh battery which is huge for a pod vape but the constant wattage output means that your battery will drain faster depending on the wattage level you have set. Vaping at the 4th and 5th wattage level (20 & 25W) I was able to get a full day of vaping out of the Pasito. I even had some battery life left at the end of the day.

The wattage LED on the front of the device also doubles as the battery life indicator. The LED indicator will light up when you press the fire button. The battery levels are:

Charging times are pretty good but not stellar for using USB-C. Yes, the battery is 1100mAh but it still took just over an hour and a half to recharge to full capacity. The Pasito does have pass-thru charging though so at least you can vape while it charges. 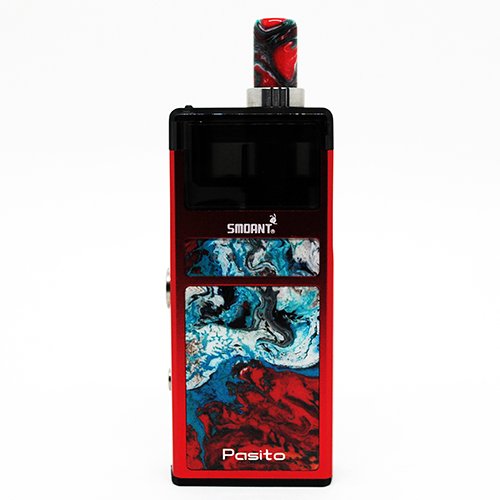 I found the performance of the Pasito to be very good and quite enjoyable to vape on. Depending on the type of draw that you like you can use either the 0.6ohm coil or the 1.4ohm coil.

The 0.6ohm coil is the best of the two and produces great flavor and surprisingly large clouds for a pod vape. Flavor is full, rich and extremely tasty. The throat hit with a 35mg nicotine salt is very nice at the 4th or 5th wattage level. I kept the airflow half closed as this was where I got the best draw. Also, even though it is a sub ohm coil, it wasn’t too harsh to use a nic salt ejuice. Regular ejuice was also very enjoyable.

The 1.4ohm coil was less flavorful but still didn’t disappoint. You get a nice MTL with the airflow fully closed but it isn’t very tight so if you’re seeking a tight MTL draw then this device isn’t the one. With the airflow open it’s more of a DL draw. I also got a nice throat hit and good flavor using 35mg nic salts. I found that the third wattage level worked the best with this coil as it brought out the right balance of power and heat. 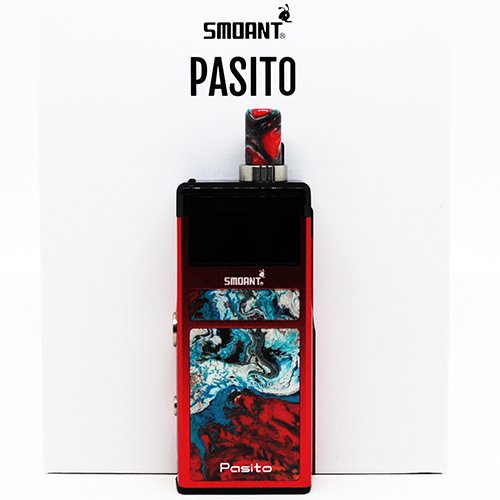 The Smoant Pasito is a great pod vape. You can use either coil to achieve the type of draw you prefer and the airflow adjustment is good, although I wish there was more room to adjust it. The ability to change your wattage is a nice feature to have and it allows you to find just the right hit that you like to vape.

Flavor is also great off either coil but the 0.6ohm coil is better and I prefer it over the 1.4ohm coil. The battery life is also long lasting and will get you a day of vaping and then some, even on the highest wattage setting. While there are a few things that could be improved like the size of the fill port, it’s a good device to pick up if you’re looking for a solid performing pod vape.