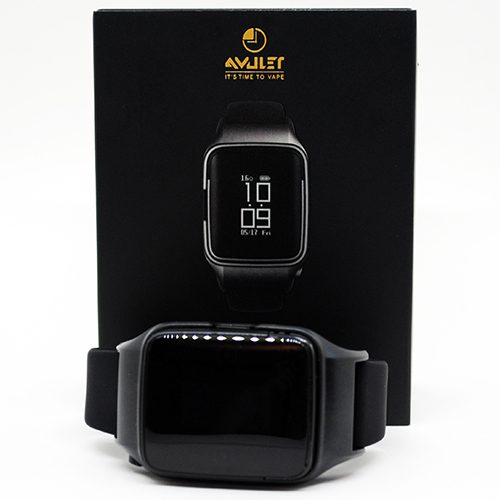 Uwell Amulet Vape Watch Review — The Watch You Can Vape With 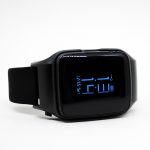 It’s one of the most unique and crazy vape devices ever released and it’s one that you can wear on your wrist: the vape watch. It’s called the Uwell Amulet and as crazy as it is, at least it’s an original idea. It just seems like manufacturers are copying each other and releasing slightly different versions of pre-existing devices so it’s nice to see something new for a change.

The Uwell Amulet is basically a small pod vape with a watch housing for a case. It uses replaceable pods that have a 2ml capacity and a resistance of 1.6ohm. It’s got a 370mAh battery and will fire at a wattage of 10W. It looks just like a smartwatch but unfortunately, it isn’t very smart. So the question is: is it worth wearing?

Uwell Amulet Vape Watch Review — The Watch You Can Vape With 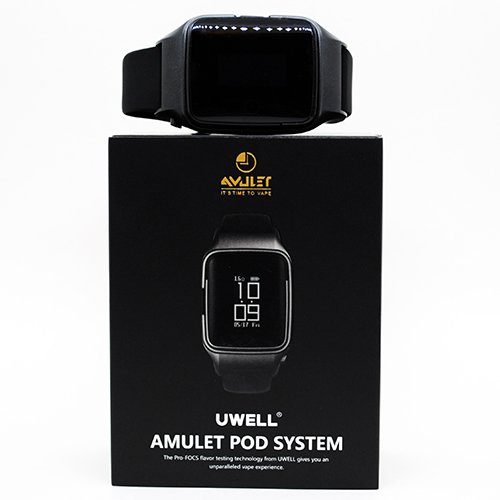 First impressions? It’s a nice looking watch that looks just like a smartwatch. It’s a bit thick so it sits a little high on the wrist but I still like it. The strap, case and pod device itself are all black and that’s the only color currently available. It might be available in more colors in the near future though.

The straps on the watch are made of silicone and there are eight holes to adjust for your wrist size. If you’ve ever used an Apple Watch then this strap will be familiar because it looks and works exactly the same. It’s very easy to adjust and I found it very comfortable to wear. There’s also a little latch to remove the straps from the case so Uwell might be selling different straps in the future.

The Amulet itself is small and square with rounded corners. It weighs only 27g so it’s not heavy at all which makes it nearly weightless when it’s sitting on your wrist. It’s sleek and super simple with only one physical button on the side of the device. There are two touch buttons on the sides of the screen to change the date. 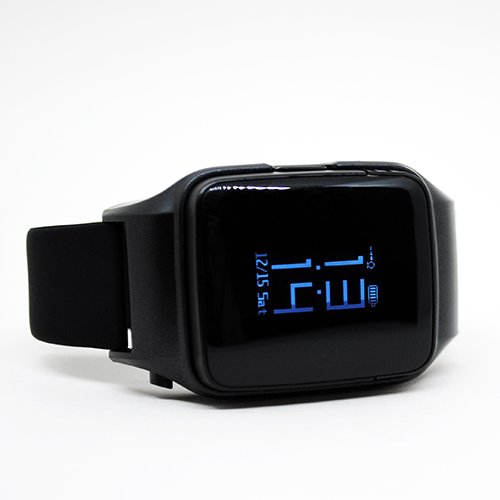 The Uwell Amulet is a simple device. Although it looks like a smartwatch there really aren’t any “smart” features to speak of; it’s basically a pod vape that displays the time in big numbers. The smartest feature of the Amulet may be that it’s draw activated.

The screen is pretty small but it’s bright and does its job as a watch. The Amulet displays the time in large numbers and in military time. Unfortunately, there isn’t a way to change this. In addition to the time, the screen also displays the coil resistance, battery charge and date.

The Amulet comes with only one pod and that’s both strange and disappointing. Pod vapes should always come with an additional pod. What do you do if you accidentally burn the first one? This almost forces you to purchase a pack of pods with the device before you even know if you’re going to use it heavily. Manufacturer’s take note: if you’re selling a pod device, include at least two pods.

The pod is pressure fitted to the device and it pulls out with a firm tug. It’s darkly tinted so it’s difficult to see how much ejuice is left in the pod unless you hold it up to the light. The pod is completely hidden when placed in the watch case so it could have been transparent and it would have still looked great. The pod will hold up to 2ml of ejuice and houses a non-removable 1.6ohm coil. Once the pod is done, you’ll have to replace it with an entirely new one.

The mouthpiece on the pod isn’t centered. Instead it’s positioned towards the back, top side of the device. I assume that Uwell did this to make it more comfortable but it almost accomplishes the opposite effect. I don’t hate it but it’s not super comfortable either.

Additionally, the mouthpiece is so short that the vapor can get a little too hot on your lips when you take a draw. It doesn’t always happen, it just depends on how your lips are sitting on the mouthpiece.

There’s a rubber plug on the bottom of the pod for filling. It’s a tight fit and I haven’t had a single issue with leaking from the port.  Judging from the small pod I thought that the fill port would be small but it’s actually huge. There are no issues fitting bottle tips of any size.

Airflow on the Amulet is tight but it’s not too hard to pull. It’s a very nice MTL draw. Like a lot of other pod vapes, there’s no way to adjust the airflow. The draw activation also works really well.

There’s a hole at the bottom of the pod that allows air through the pod while a little notch on one side of the pod draws air through. Overall, it’s a true MTL draw that MTL vapers will enjoy. 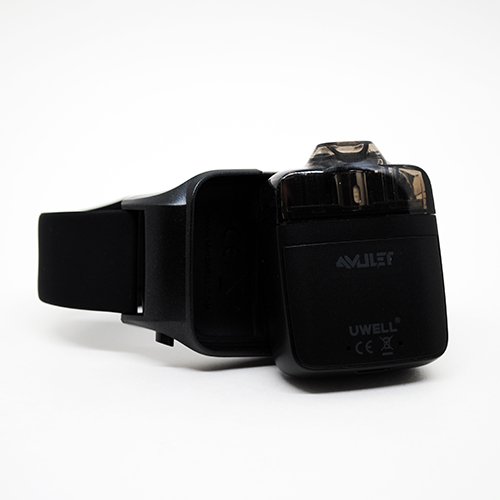 There’s a 370mAh battery built into the Amulet; impressive for its small size. You can charge the battery using a Micro-USB cable through the port at the bottom of the device. The Amulet only fires at a maximum wattage of 10W so battery life is actually very good. I used the device for just about 4 days of light-medium use and the battery still had juice. I would imagine with heavy use the device could last for 2 days at the least.

The amulet seems to be more of a backup vape than a dedicated device. It’s nice to carry it around on your wrist for those times when you misplace your main vape. It’s also great if you’re just going to be doing some light vaping. This seems to be what the device is meant for and so the battery life is perfect for this type of use. 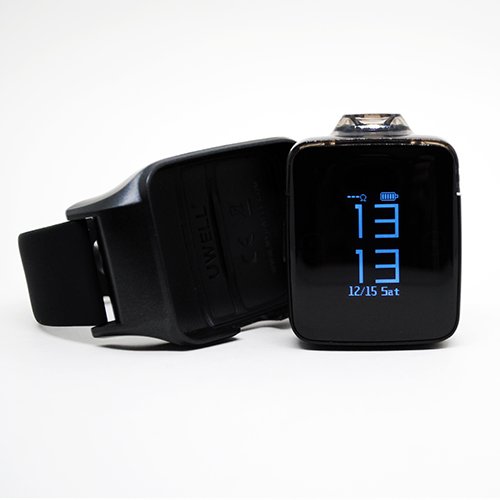 The performance of the Amulet is surprisingly good. Even though Uwell created this device (and they’re known for some of the best vape tanks out there) I honestly wasn’t expecting too much from a vape watch. The flavor is still nowhere near the Caliburn but it’s definitely still above average.

The flavor is full and pronounced but it’s not knock-your-socks-off level. It’s perfectly acceptable though and still satisfying enough to vape on for short periods of time. The vapor is a tad bit warm, probably due to the small pod size, but it’s not hot. The only time the vapor feels hot is if you position your lips the wrong way on the mouthpiece.

Wicking is also a non-issue. Taking many hits in a row didn’t even phase the coil because I never ended up with a dry hit. Although I do see this as more of a back up vape, it can keep up with chain vaping just fine. 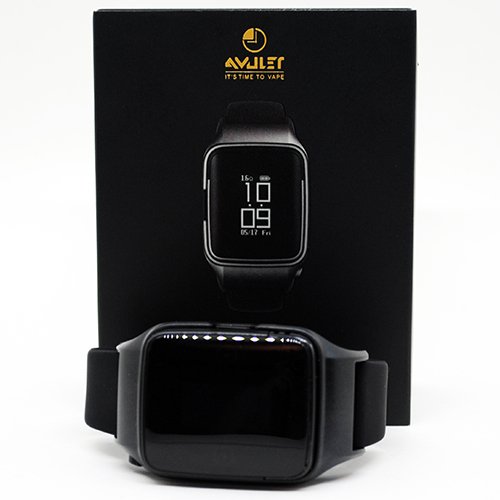 Would I recommend you go out and purchase the Uwell Amulet? If you like the idea of a vape watch and could use a backup vape then you should go for it. The battery life is great when used as a secondary vape and the flavor is above-average. It’s not at all a smartwatch but it certainly looks like one and it does what no other watch can: produce that sweet, sweet vapor.

If you do pick one up, I’d suggest grabbing a pack of pods as well. You only get one pod and you don’t want to be stuck without an extra. You’ll probably get a few strange looks when you pull the Amulet out of its case and start blowing clouds but it’s definitely a conversation starter.

What do you think about the Uwell Amulet Vape Watch?