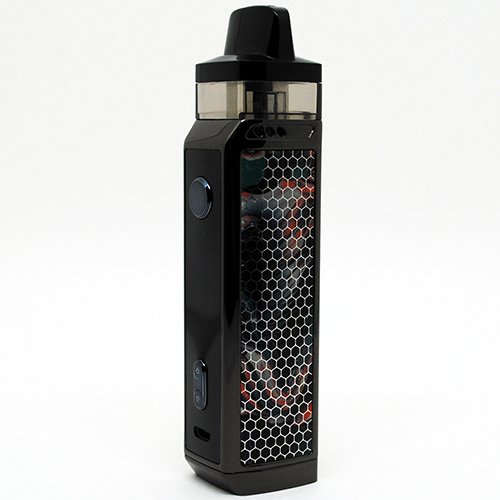 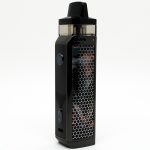 A few weeks ago I reviewed the Voopoo Vinci and while it was close to being a really good device, I had a few issues. Namely, it wouldn’t stop leaking, the draw activated firing didn’t work too great and I kept getting a “check atomizer” error. Now I’ve got my hands on the Vinci X to see if it fixes these issues.

Like the Vinci, the Vinci X is a variable wattage pod mod and it can fire from 5-70W — 30W higher than the Vinci. It also uses a single 18650 battery for power as opposed to the built-in battery on the Vinci.

Aside from these differences, the Vinci X has the same full color 0.96” display, the same 5.5ml pod that uses replaceable coils and it uses Voopoo’s GENE.AI chipset.

Is the Voopoo Vinci X worth your money? Keep reading to find out. 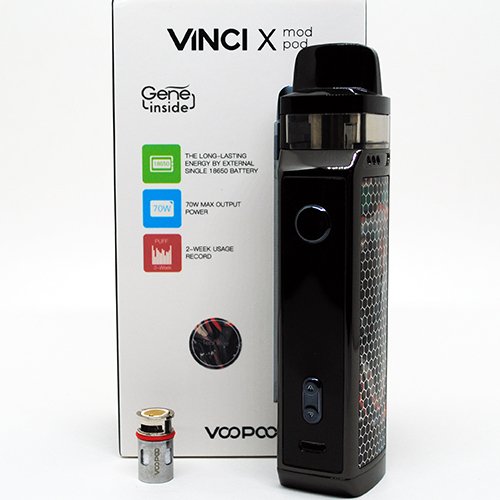 The Vinci X looks almost identical to the original Vinci. It’s got the same cube-like shape with rounded edges, the same buttons and the same screen. But there are a few key differences. One difference is the size. The Vinci X is taller and a bit deeper than the Vinci. It’s 117mm tall, 25.3mm wide and 29.5mm deep. It’s huge for a pod vape but it has to be big to fit an 18650 battery. It’s still comfortable to hold and use but it’s not what I would consider ultra-portable so if you’re looking for a pod vape that is small and light, this isn’t the one.

The Vinci X is well-built and solid. The panels are absolutely gorgeous and I love the ‘Teal Blue’ design that I received. The panels don’t hold fingerprints but the body is a gun-metal color that picks up fingerprints like crazy.

The back of the Vinci X has the VOOPOO logo going down the middle and a small “Gene Chip Inside” logo at the bottom. On the front of the Vinci X is a 0.96” LED screen (the same as on the Vinci) and it’s clear, vibrant, and bright. It’s a full color screen that sits behind a sheet of plastic which will offer some protection if the device is dropped.

The Vinci X has a circular firing button and two small adjustment buttons. They all feel solid and are firm and clicky.

There’s a battery cap at the bottom of the Vinci X that unscrews to insert the battery. The threading is smooth and buttery. It’s easy to unscrew and there are venting holes built into the cap (great job on that Voopoo!).

The Vinci X takes a single 18650 battery, a change from the built-in battery on the Vinci. With a couple of single 18650’s, you can essentially use the Vinci X with zero downtime. I can’t think of another pod vape that you can do this with so this is a big pro for me.

How to Use the Voopoo Vinci X 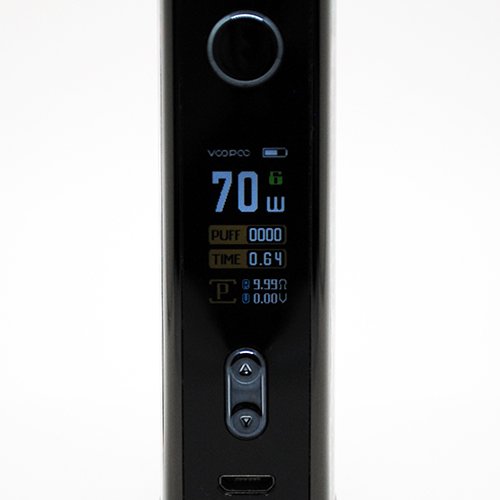 When you insert the pod the Vinci X automatically sets the wattage to the lowest range of the coil. It also does this if the device goes to sleep; it got annoying having to turn the wattage back up whenever I left the device for too long.

There’s a puff counter log on the Vinci X that tracks your puffs each day. You’ll first have to set the time by holding all three buttons. The clock is in 24H format so take care to set the right time for an accurate puff counter. Hold both adjustment buttons to view your puffs per day.

The button combinations on the Vinci X are identical to the Vinci:

View your puffs per day: Hold both adjustment buttons to display a graph that shows your puffs each day. This information is kept for two weeks.

The pod for the Vinci X is large and shaped like a cube. It’s the exact same pod as for the Vinci so they’re fully interchangeable. The pod is lightly tinted so it’s very easy to see how much ejuice is inside of it. It attaches to the battery magnetically and is held in place by four magnets, one on each corner of the pod. There’s a little bit of wiggle when the pod is seated in the battery.

The pod holds 5.5ml of eliquid and is filled through a side port. The port is plugged by a deep rubber stopper that holds in the ejuice. The fill port is large and fit all of my ejuice bottles easily. I had no trouble filling the pod.

A wide and thin mouthpiece is built into the top of the pod. It’s a curved, rectangular shaped mouthpiece and it’s somewhat tall too. It’s comfortable on my lips and doesn’t get hot when vaping.

Each coil provides an airy draw. I didn’t find there to be much of a difference between the airflow of the two. If you’re planning on using regular nicotine ejuices then you can use either coil. 6mg ejuices vaped fine and gave a nice draw.

For nicotine salts I wouldn’t recommend using the 0.30ohm coil. Even with a 25mg salt at 32W it delivers far too much nicotine and isn’t a pleasant experience. The 0.60ohm coil is much better suited for salts although I wouldn’t vape anything higher than 35mg.

The pod are easy to install. They pressure fit into the base of the pod with no threading necessary. The fit also isn’t too tight so they can be removed easily when needed. 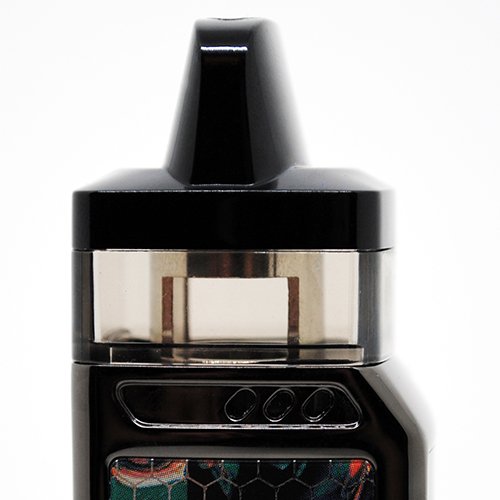 The airflow on the Vinci depends on how you have the pod inserted into the device. Unlike the original Vinci, i didn’t find that the included coils made much of a difference to the airflow.

With the airflow set to open there’s no restriction at all. It’s a very airy DL vape that is too open for my liking. Setting the pod to close down the airflow is a better and more restricted draw but it’s still loose. It’s somewhere in the realm of a restricted DL or a loose MTL draw. I would have liked the closed airflow setting to be more restricted. It’s still too loose for me to really love. 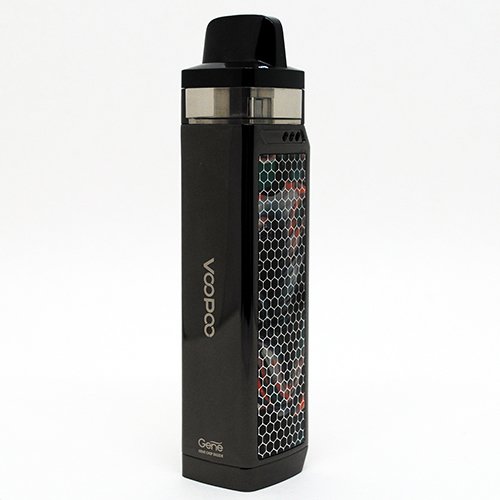 I’ve been using the Vinci X for around two weeks and it’s been mostly smooth sailing. I’m glad to say that I haven’t experienced any issues like I did with my original Vinci.

The 0.30ohm coil seems to be the same as on the Vinci and it’s my favorite for sure. It’s a very nice vape at 40W although it does feel like it could use more power. I feel like it could easily do 50W without breaking a sweat. It’s a warm and pleasant vape with crisp flavor that is definitely up there with the best pod mods. This coil struggled a little with high VG ejuices (80VG) whenever I would chain-vape but 60VG worked beautifully.

Performance is nearly the same with the 0.60ohm coil — it’s a similarly smooth and tasty vape. This coil also feels underpowered and like it could go higher than the 28W max. It handles high VG ejuices better than the other coil though and I had no issues with long pulls.

You can use nicotine salts with the 0.60ohm coil but I wouldn’t suggest using anything higher than 35mg. Even a 30mg produced a throat hit that had a real kick.

Airflow on both coils is nearly identical: an airy DL draw with the airflow open and a loose MTL/ restricted DL with the airflow closed. For a pod device I was expecting the draw to be tighter and I’m disappointed that it’s not. 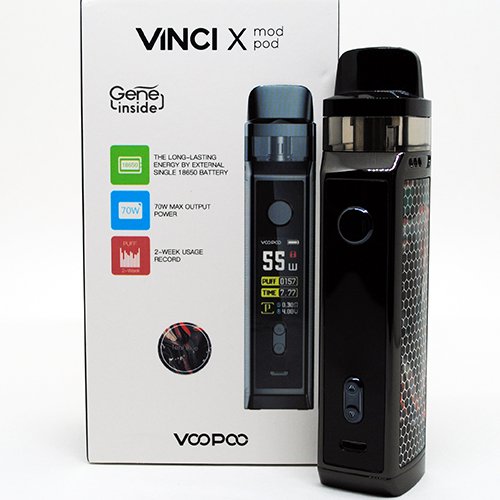 Voopoo have done a really great job with the Vinci X. It’s one of my favorite pod mods that I’ve used so far! It’s unique as it’s the only pod vape I can think of that uses an 18650 battery and  that’s in addition to variable wattage, a huge pod capacity and really great coils. But it’s bigger and heavier than most pod vapes which is the only real drawback.

I’m definitely going to continue using the Vinci X for the foreseeable future.