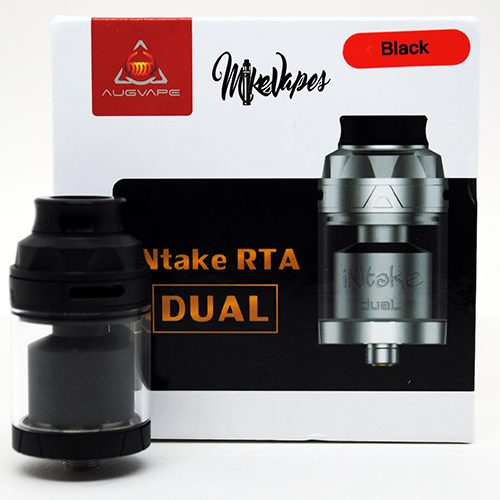 Augvape Intake Dual RTA Review: It Was Worth the Wait 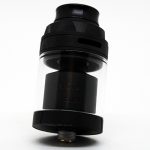 Mike Vapes and Augvape have collaborated again, this time to make the Intake Dual. It’s a dual coil version of the original Intake RTA but it brings with it some major changes. The original Intake used a top airflow configuration that funneled air into the base of the build deck to offer a leak-free, bottom-airflow-like vape.

The Intake Dual still uses a top airflow control ring but the ‘intake’ system has been completely redesigned to produce even better flavor and airflow. The Intake Dual has a 5.8ml max capacity, dual slotted top airflow and a postless four terminal build deck. Keep reading to find out if it’s worse, just as good, or better than its predecessor.

Augvape Intake Dual RTA Review: It Was Worth the Wait 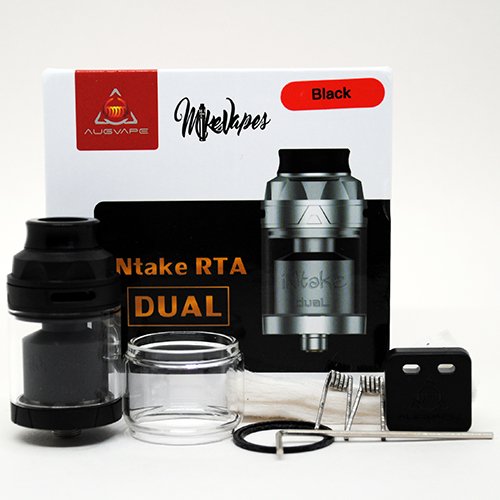 The Intake Dual is a spitting image of the original Intake. It’s almost identical in appearance, except it’s a little bigger at 26mm and the indents around the top cap appear to be smoother. As a matter of fact, the entire tank feels more well-refined and better manufactured.

The indents along the top cap are, as I said, smooth and look good. They also help to grip the top cap to remove it. It comes off silky-smooth and with a quarter turn. The threading here is really well machined. There are two large kidney-style fill ports and they make filling this tank a breeze. There’s also a silicone guard on the underside of the top cap to prevent any leaking.

The drip tip is curved and similar to the one on the Wotofo Recurve, although it’s much shorter and less dramatically curved. My lips fit onto it comfortably. I was fine using it but if you prefer to use your own drip tip you certainly can. There are o-rings inside the top cap which will fit any 810 drip tip of your liking.

The Intake Dual has two airflow slots at the top of the tank. They’re fully adjustable and can even be closed down all the way. The airflow control ring works on a stopper and is a little stiff but it’s still not too difficult to adjust.

Here is where it gets interesting! Top airflow tanks are usually poor in the flavor department but have the advantage of being practically leak-proof. Augvape thought this one through and designed the Intake Dual to be leak-proof while still delivering the flavor of a bottom airflow tank. How? Well, the airflow slots feed down through two slots that carry air directly to your coils. The airflow then hits your coils from the sides as well as the top and bottom. It’s a genius design.

To make this an even better flavor RTA, the Intake Dual also has a large domed chimney that encapsulates your coils and narrows near the top to further concentrate the flavor.

The only problem with the design of this RTA is the base. First off, it can be difficult to remove because it’s so thin. Secondly, if you over tighten the tank onto your mod you’ll have a tough time getting the tank off in one piece. More than likely you’ll end up unscrewing the tank from the base. If you’ve got a tank full of ejuice this can become a messy situation.

Even with this little design flaw (if you can call it that), I really love the design of this RTA. The matte black Intake Dual looks really good on my black mods, it’s as if they were meant to be together. When it comes to looks, this is one handsome tank.

The deck on the Intake Dual is really easy to use. It’s a postless deck with four terminals. There are wicking ports on either side of the deck as well as two large semi-circle shaped posts. The entire deck is clean and precisely machined. It’s a beauty to look at.

The semi-circle posts are what funnels the air from the top of the tank and straight to your coils. They have a cut out near the bottom of the deck and this is where the coils should be positioned. The deck uses side-secured hex screws to grip the coils and hold them in place firmly.

Compared to the original Intake, this deck design is cleaner and more straightforward. To fit a coil on the original Intake you had to make your coil ‘do the splits’ and manoeuvre it just right to fit properly. This build deck is a lot easier to use. Measure the coils with the included block, drop them in, tighten and straight and you’re good to wick.

Additionally, I like the style of these intake vents better. Instead of two circular pipes that funneled air underneath your coil, this takes the air direct to the sides. It’s a shorter travel for the airflow and, in my opinion, a better design.

Building on the Intake Dual

With a postless deck like this it can be difficult to know where to cut your leads so Augvape include a coil measuring block in the box. With this you can drop your coils in and cut them to sit exactly where they need to be on the build deck.

Included in the box are everything needed to build: two pre-made coils and some cotton. If you use the coils that come with the Intake Dual, the dual coil build will come out to around 0.10ohm. This is an extremely low resistance and not at all where I usually vape. I would have prefered a 0.15 to 0.20ohm build much better.

Loosen the hex screws with the included allen key but take care not to loosen them too much. If they fall out they can be a pain to get back in because they’re so small. Only unscrew them until the terminals are open, no more.

If you haven’t already, use the coil measuring block to trim your coils. Once that’s done you can drop them into the build deck. The coils should be positioned lengthwise with the intake vent; there should be one coil per side that has a vent. If you’re still confused, just take a look at the wicking ports. When your cotton is threaded through your coil, you want to be able to tuck it into these ports.

Tighten up the screws and straighten out the coils. When done correctly, each coil will be aligned with the airflow slot in the intake posts.

Pulse the coils at low wattage and remove any hot spots. If the coils aren’t heating evenly, pinch the coil together by squeezing the sides with a pair of ceramic tweezers. This should fix the issue.

Wicking is just as easy as building. I used the included cotton strip by separating it into two pieces. Then, I rolled it into a circular shape and threaded a piece through each coil. Trimming the cotton at the base of the deck is the best place to cut it. Tuck the cotton into the wicking ports while ensuring that there are no gaps.

Last but not least you can prime your cotton with some eliquid. Give the cotton a good soaking and you’re ready to put the tank back together and fill er’ up! 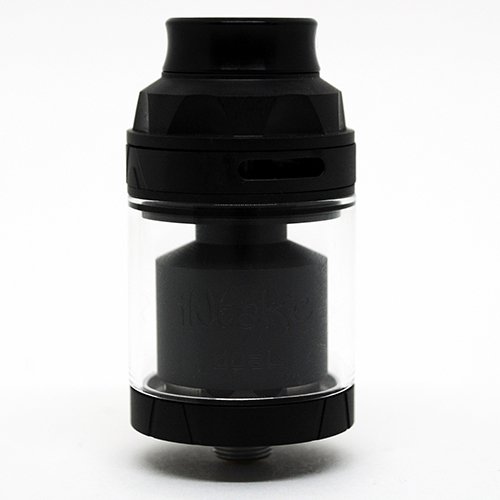 I loaded up the Intake Dual with Pressed Pink Melon which is a peach, watermelon and honeydew ejuice. Once the included cotton broke in, the flavor started coming in strong. I’ve used this ejuice in tons of other RDA’s and RTA’s but the Intake Dual brings out the flavor more strongly than most. I’d rate the flavor a 9/10.

I left the airflow wide open and a restricted direct lung draw is what the Intake Dual delivered. For me, It’s a comfortable level of restriction but it might be too tight of a draw for some vapers. I was able to get near a MTL draw by closing the airflow down most of the way but with the included 0.10ohm coils at 80W, it’s an uncomfortably hot draw.

My recommendation: Leave the airflow wide open at 80W with the included coils.

Due to the nature of top airflow tanks this should go without saying, but I haven’t experienced any leaking. If you’re looking for an RTA that won’t leak ejuice everywhere then this is a sure pick. But while you won’t end up with ejuice on your hands, the Intake Dual is a thirsty tank. After a day of consistent vaping my tank was almost always depleted. 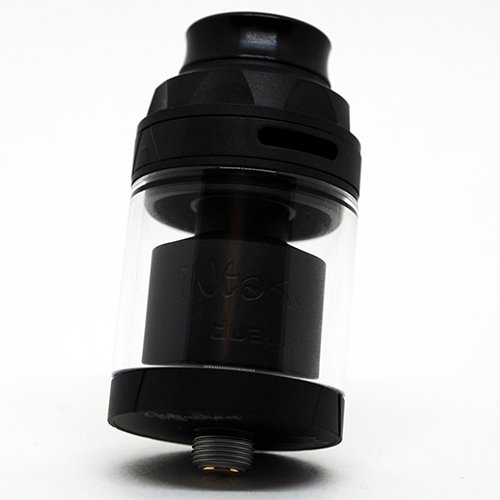 The original Intake is a tough act to follow but I think that Mike Vapes and Augvape have done a really good job with the Intake Dual. The improved intake system works like a charm and I like the restricted DL draw that it delivers. I can’t complain about the flavor either. If you’re into tight draws then you’ll like this tank too.