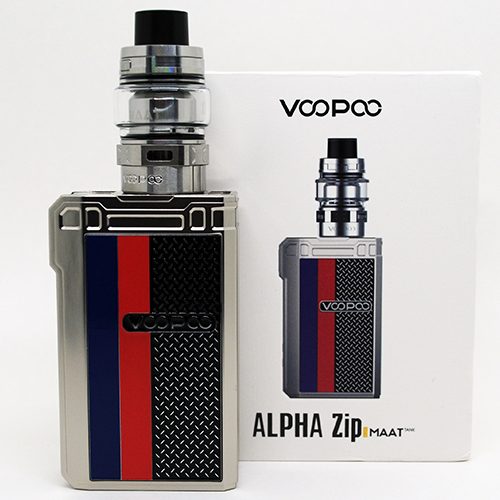 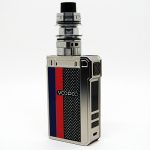 If you weren’t a fan of the Drag 2’s design, Voopoo have released a mod that you just might like. The Alpha Zip is a dual battery mod that shares much of the same internals as the Drag 2 but it comes in a completely different form factor. It will fire up to 180 watts and comes in a variety of different metal panel designs. It also uses the same Gene.Fit chip as the Drag 2 to fire at incredibly fast speeds.

Included with the kit is the MAAT sub ohm tank. It’s got a 4ml maximum capacity, a convenient push-button fill cap and uses easy to install ‘plug n play’ coils. The three adjustable airflow slots on the MAAT are particularly interesting. But is this a kit that you should be zipping to buy?

This kit was sent to me by ProVape for the purpose of this review. 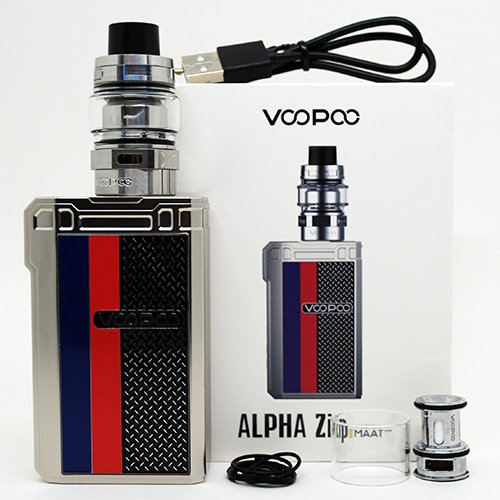 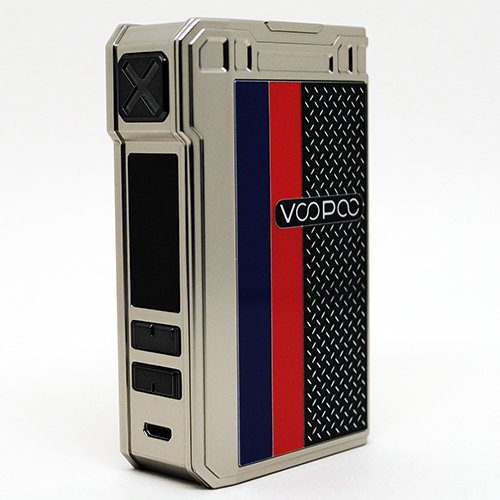 Right from when I first saw this mod online I got the vibe that it was going to be nice. And now that I’ve had a chance to use it a bit, I can say that I was right! It’s very close in size to the Drag 2. It’s 85mm tall, 53.5mm wide and 25.5mm deep which is almost identical. It’s got a completely different look and feel though.

The Alpha Zip is boxy but it has smooth edges so it’s not sharp and doesn’t cut into your hand. I’ve also got small hands but holding it is actually pretty comfortable. I like that the fire button is raised a bit compared to the screen and adjustment buttons. It makes it easier to fire and more natural to hold.

I’m using the ‘Locomotive’ pattern and it’s got really stunning panels. The blue and red stripes look and feel like porcelaine (although I’m sure it’s not) and the metal grid is also really well done. Voopoo’s website say that they use 11 steps of “exquisite metal carved craftsmanship”. After seeing and feeling it for myself, I believe them.

The 510 plate on this mod is slightly off center and shifted more towards the back of the device. It’s a spring loaded connection with a good amount of travel and resistance. It feels and looks solid. It’s also flush with the top of the mod. Great job here by Voopoo.

The Alpha Zip uses Voopoo’s traditional three button configuration. There’s one large firing button and two smaller adjustment buttons. The fire button is square and has an ‘X’ on it. It takes a fair bit of pressure to activate, just enough that it’s hard to press it accidentally. The adjustment buttons are small and rectangular and work much the same. All three buttons feel very good and match the high level of build quality on the rest of the mod.

The Alpha Zip is a dual 18650 mod. There’s a removal panel on one side of the mod which can be pulled off to access the battery compartment. There’s a small gap at the bottom that makes it easy to remove. The magnets that attach the panel are quite strong and the panel snaps back into place. My only build quality concern with this mod is that the panel has some wiggle. It’s not a lot but it’s enough to be noticeable.

The battery compartment is very clean and made completely of black plastic. The positive and negative indicators are hard to see because they’re also in black. Make the indicators white for easier visibility! Please! The contacts for the batteries are spring loaded and there’s a ribbon to make removing the batteries simple.

Build quality is what I expected from Voopoo: excellent. Other than the battery door having some wiggle, everything else is precisely machined and assembled. It’s a lovely mod.

If you buy the kit then you get the MAAT sub ohm tank. It has a 24.5mm base diameter and fits perfectly on the Alpha Zip. It has a simple design and, just like the Alpha Zip, it’s cleanly machined.

The tank comes with a straight glass that will hold 2ml of eliquid and a bubble glass that increases this capacity to 4ml. This tank is a thirsty one too so I would highly recommend using the bubble glass.

The drip tip on the MAAT looks like a regular 810 but it’s not. It doesn’t slip into the top cap but instead fits around a raised metal ring. The drip tip is essentially an 810 ring of plastic. You can’t use other 810 drip tips and that’s disappointing, especially because it doesn’t come with an extra.

The top cap on the MAAT is spring loaded and swivels open with the press of a button. This small button is located just under the top cap and flush with the tank. I don’t like push button caps because of the risk of it popping open in your pocket/purse. But because the button is flush, there’s very little chance of this happening.

The fill port is small and deep so you have to be careful when filling. If you fill too fast you’ll create a bubble of ejuice and it will all come spilling out. Tilting the tank to the side helps but don’t fill too fast!

The airflow control on the MAAT is shaped almost like a hexagon and positioned midway up the tank. I love this design — it’s basically impossible for it to leak from the airflow holes. If the tank does leak, the ejuice will get caught in the base of the tank. This base section is deep and completely sealed. Luckily I haven’t had even the tiniest amount of leaking. Just small amounts of condensation.

There are three small slots that are fully adjustable. They pull air into the bottom of the tank and then up through the coil. The resistance on the airflow is a little too loose for my liking but it’s firm enough to stay where it’s set. Vaping with the airflow open delivers a semi-restricted direct lung draw that’s really pleasant for a sub ohm tank. Closing the airflow of course restricts the draw even more. In my opinion, it’s restricted enough when it’s open to be the optimal draw for this tank.

The MAAT uses ‘plug n play’ coils which, in simple terms, means that you can push the coils in or pull them out; no screwing or unscrewing required. The top o-ring on the coils have a tendency to pop off though so be careful when installing the coil. A missing o-ring is never a good thing.

To install or remove the coils you have to remove the base of the tank. It comes off with a little less than a half turn. When trying to remove the tank off of the mod you’ll probably wind up removing the base but don’t worry, it won’t cause the tank to leak. Still annoying though!

I’ve mainly used 70/30 ejuices with these coils but I also used 80/20 (VG/PG). The coils performed just fine with both although I have been going through ejuice like crazy! But no issues wicking and, most importantly, no leaking tank! As far as coils go these have been good to me. 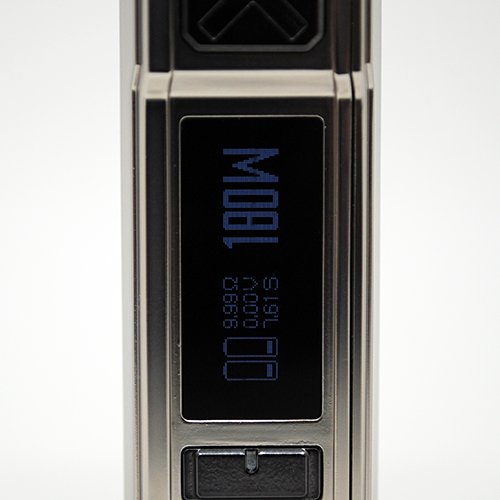 The Alpha Zip is basically a remodeled Drag 2! The screen and menu are, as far as I can tell, exactly the same. The biggest difference: the Alpha Zip fires up to 180W while the Drag 2 ‘only’ went up to 177W.

The OLED display is clear but it could definitely be brighter. The main screen has the current wattage in large font, individual battery life icons, resistance, voltage output and puff time.

The menu system is simple. Hold both adjustment buttons together and you’re able to set custom curves, view your serial number, or view your firmware version.

Like the Drag 2 the Alpha Zip also has ‘FIT Modes’. By pressing the fire button three times you’ll switch to FIT mode. There are three options:

Change From F° to C° (and vice-versa): Scroll all the way down to the lowest temperature. Press the down adjustment button again to switch your temperature measurement.

Lock Coil Resistance: While in TC mode, hold both adjustment buttons. The third option (ohm symbol) allows you to set your coil resistance.

TCR: While in TC mode, hold both adjustment buttons. The fourth option allows you to set your TCR setting.

If you’re used the Drag 2 then vaping with the Alpha Zip will feel familiar. It’s just as rapid-firing and reliable. It’s also just as battery efficient.

I’m not technical enough to test if it’s really outputting the correct wattage. But I am experienced enough to know what 80 watts feels like and it truly feels spot on at 80W. As far as I can tell the wattage accuracy is correct.

Speaking to reliability, the Alpha Zip has worked like a charm. It hasn’t malfunctioned or done anything out of the ordinary so for me that’s also a win.

The Alpha Zip is an excellent mod but the MAAT tank is what really impressed me. I was not expecting this tank to be so good! Starting with the MT-M1 single mesh coil, flavor is excellent. Optimal wattage for me was 80 watts where I got a warm and dense draw.

Using the MT-M2 coil is somehow even better! 75 watts was the setting for me to have a warm and flavorful vape. Ultra impressed by these two coils.

The MAAT works best with completely open airflow because it’s already restricted enough. I closed up the airflow to test but it was too restricted for me to vape on. The vapor also gets considerably hotter which I’m not a big fan of. If you’re anything like me and prefer a slightly restricted direct lung vape, open airflow is the way to go. 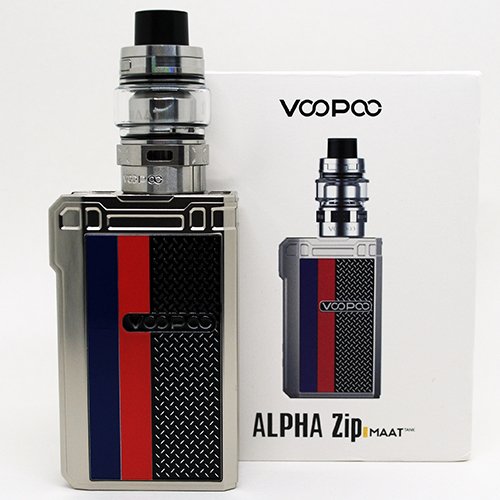 This kit rocks. If you didn’t like the design of the Drag 2 you should give the Alpha Zip a try. It’s an excellent mod! There’s very little I can knock it for besides the slight wiggle in the battery door but there’s a lot of positive things to say. As a bonus you get the MAAT tank which I can’t knock either. It’s somewhere on the level of the Crown 4 or Hellbeast. For it to be included in a kit is a total deal.