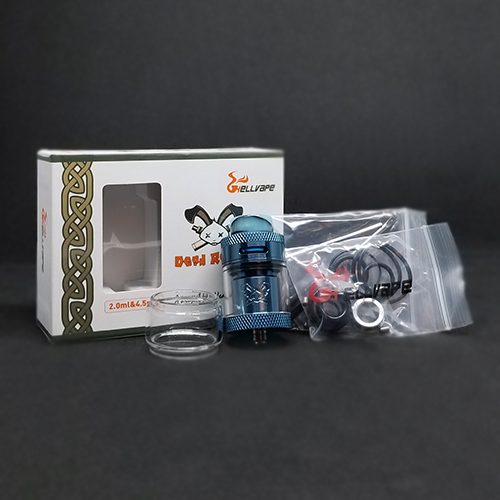 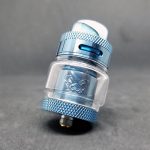 Hellvape and Heathen are back at it again; this time with the Dead Rabbit RTA. It keeps much of the same design and features that contributed to the huge success of the RDA, such as the “Rabbit Ear” style posts and downwards slanted airflow. However, as an added bonus, you get the convenience and benefits of a refillable tank.

The hype around this tank has been huge, and so I got my hands on one as soon as I could. I have to admit, even I was caught up in the hype and anxious to try it out. Well, I got one, and there is a lot to go over.

But just how good is it? And is the flavor comparable to the RDA? I’ve been busy testing and tinkering with the Dead Rabbit RTA to find out, and in this in-depth review I’m going to go over everything that you need to know. 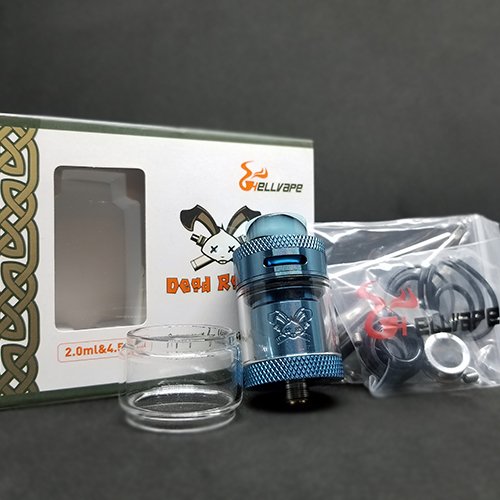 The Dead Rabbit RTA comes in a nice little box, with a see-through window that allows you to see the tank inside. Open up the box and you get: 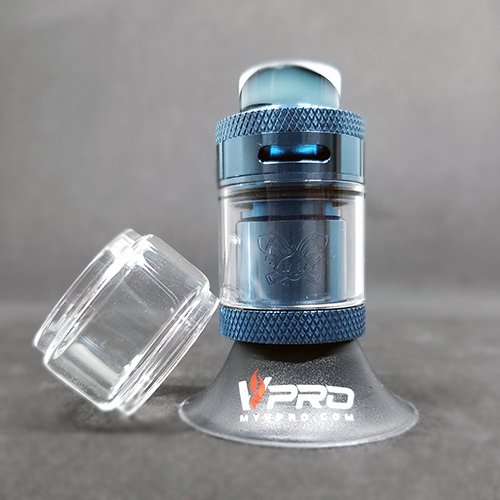 First impression: this tank is really really nice. At 25mm, it’s slightly bigger than most other RTA’s, and it looks the part. The Dead Rabbit RTA has smooth rounded edges, and a thick, wide top cap section that gives it a bold and high-end appearance. The machining on the outer body is very clean, and super well-built. The top cap and atomizer plate also feature the same knurling for grip as the original Dead Rabbit RDA.

This tank comes with two drip tips, both of which are 810 and made of resin. One is black and white, while the other will color-match your tank. In my case, I got the blue tank with the light blue drip tip. Both drip tips are quite low profile, and have a soft-touch feel to them that is very pleasant on the lips. What isn’t pleasant though, is how much this tank heats up. After vaping for a while, you have to be careful not to burn your lips. For this reason, I would have preferred if the drip tips were a little taller.

The top cap on the Dead Rabbit RTA features the same knurling as the RDA, and twists off to fill. The threading is very well-machined, and the cap both comes off and goes on smoothly. The Dead Rabbit RTA has two large fill ports that are very easy to access and will accommodate most nozzles and droppers. When you’re finished, the top cap goes back on very snugly, so there’s no chance of it coming loose in your pocket. Nice.

Personally, I’m not the biggest fan of top airflow RDAs because I find the flavor is never truly there. In my opinion, this is due to the fact that the air never really hits the coil. Instead, air enters the top airflow, and almost instantly comes back out and into your mouth. That’s been my experience anyway with other top airflow RTAs, but I’ve heard that this one is supposed to be different. We’ll find how it performs a little later. 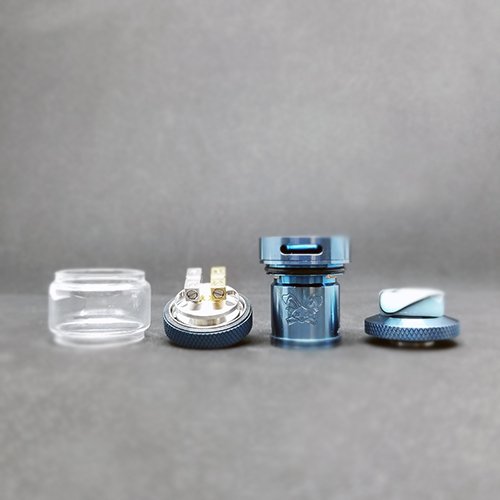 The build deck on the Dead Rabbit RTA is almost identical to the RDA, but with the addition of wicking holes. True to the name, there are four posts that are shaped like rabbit ears. Your coils are inserted from the top, and are secured from the side. The great part about the Dead Rabbit RTAs build deck is that it allows you to drop in your coils, secure them, and clip them afterwards. No need to pre measure your leads, as there is ample room to fit your wire cutters, and trim after securing. The wicking holes are rather large, and will allow plenty of room to fit your cotton. Looking at the deck, it’s a bit of a dejavu from the RDA. But that’s actually something that I was hoping for. The original deck was so great and easy to use, that I’m glad they kept it around.

Overall, the build quality of the Dead Rabbit RTA is very good. Hellvape and Heathen definitely didn’t slack when it came to this RTA, and instead have built something extremely sturdy. The top airflow is a little concerning, but I’m glad that they kept the same deck. I’m hoping the performance is as good as the build quality, but first: we have to put a build on it.

BUILDING ON THE DEAD RABBIT RTA

Building on the Dead Rabbit RTA is very similar to the original. That is, it’s great because there isn’t a lot of prep work to do before you install your coil. To get started, unscrew your screws from your posts. Next, take your coils, and drop them into the posts.

Because of the rabbit ear styled posts, you won’t need to precisely measure your leg length. Instead, you can secure your coils first, and trim the legs after. There is more than enough space between the bottom of the posts and the deck to allow a pair of wire cutters to fit (Note: I would suggest positioning your coils quite high, so that you get the full effect of the airflow).

The design of the deck makes it very easy to install your coils, and setting up your wicks is even easier. You’ll want to cut your wicks so that they barely fall into the wicking ports. You don’t want to overstuff the wicking ports, or you might end up with leaking around the base of the glass. Make sure to thin out your cotton, and prime your coil.

Once this is done, all that’s left to do is to put the tank back together and fill er’ up! Wait a few long minutes for the wick to be fully saturated, and you’re good to vape! 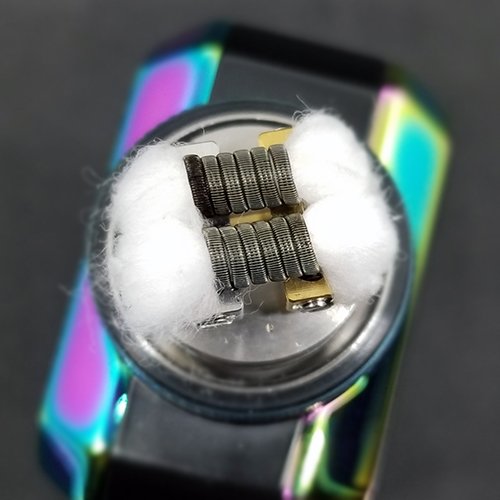 Usually when something is overhyped to all hell, it doesn’t quite live up to the high expectations that are set. And i’m not going to lie, the Dead Rabbit RTA is no different. While it isn’t the absolute best RTA of all time, it does produce some amazing flavor that is shockingly good for a tank.

But I heard some people saying that it was as good in flavor as the RDA, and that’s definitely false. The flavor on this thing is superb, but the Dead Rabbit RDA is one of the best, if not the best, RDA of all time depending on who you ask.

For a top airflow tank, the flavor is very good. The downwards slanted airflow slots help to funnel the air towards the coils, but you have to have your coils up pretty high to get this benefit. Otherwise, I found the flavor was rather muted with the coils down lower.

The airflow on the Dead Rabbit RTA is also pretty quiet, and pulls very smooth. I found that this tank delivered the best flavor when the airflow was fully open.

A last but very important point, this tank doesn’t leak. At all. Because of the top airflow and snug top cap, I didn’t experience any instances of leaking. This is something that greatly increased the joy of using this tank. I’m sure you’ll understand me here. 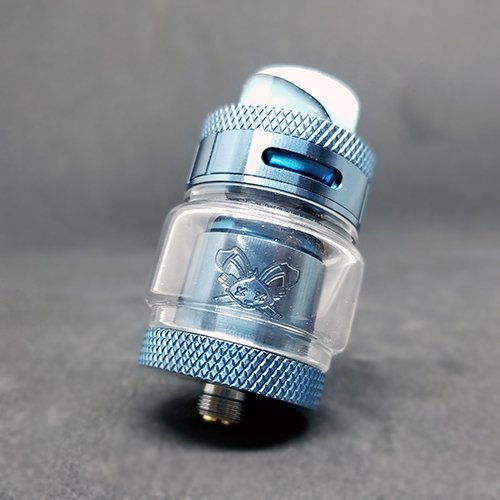 Overall, the Dead Rabbit RTA delivers a very enjoyable vaping experience, and the vapor is very smooth and flavorful. I was surprised that a top airflow RTA could produce flavor that was so good, and I think you’ll be pleasantly surprised with it as well.

The machining and build quality are also top notch, and this is a tank that will look beautiful on almost any mod. If you’re looking for a new RTA, check out the Dead Rabbit RTA.