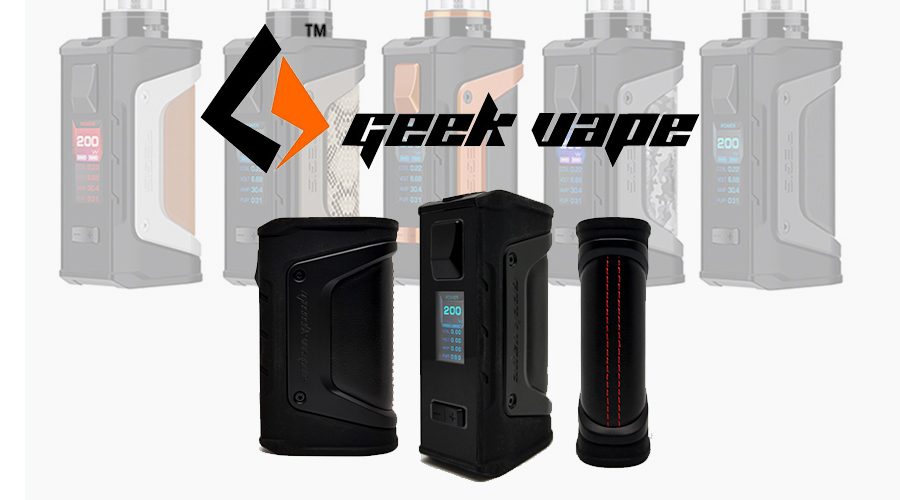 Geekvape are back with a new box mod, and it’s called the Aegis Legend. The Aegis Legend is the follow up to last years Aegis, and while it shares a familiar looking design and UI to its predecessor, the Legend brings a number of improvements to the table.

The Aegis Legend is designed to be both durable and reliable, and is IP67 water and dust resistant. The Aegis Legend is also called the “indestructible beast” as it is able to withstand extreme shock and drops thanks to its silicone encased metal body. The chassis has been updated to allow dual 18650 batteries, and utilizes Geekvape’s own AS Chip to fire at up to 200W.

In this Geekvape Aegis Legend review, I’ll be going over everything that you need to know about this device. First, the box contents: 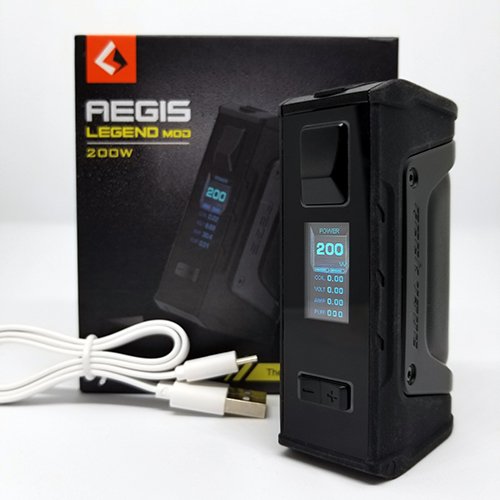 The Aegis Legend comes in a small rectangular box, with very nice and high quality printing. The box is sealed with tamper-proof GeekVape holographic stickers, so you can be sure that you’re getting a genuine, brand-new device. Once you open up the box you’ll find: 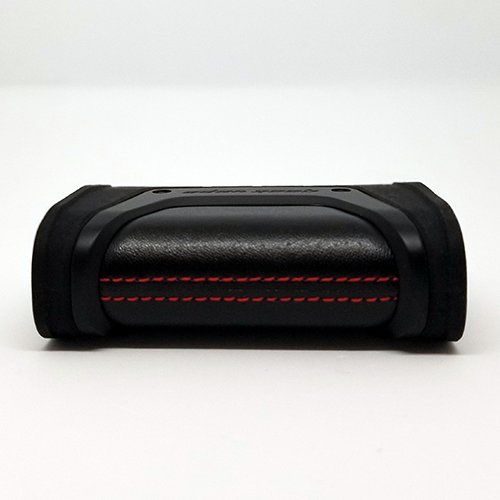 The Aegis Legend is a pretty hefty device, and I have to say that it does feel very solid and unbreakable. The Aegis Legend reminds me a little of the Lost Vape Therion 166, as it also features a leather inlay and has a similar shape and size. The leather inlay on the Aegis Legend gives the device a premium feel, and the black device that I received has some very nice red contrasting stitching in the leather.

The Aegis Legend is designed to be able to withstand a beating, and so the metal body of the device is encased in silicone rubber. This makes the Legend extremely shock resistant, and it’s definitely able to take small falls without a problem. Geekvape however, recommends not dropping the device from more than 1 meter while the batteries are installed. This is out of concern for your batteries as well as for the waterproofing of the device, but you would think that the “indestructible” designation would carry over to protecting the batteries as well.

In addition to being shock resistant, the Aegis Legend is also rated as IP67 water and dust resistant. What this means is that the Legend is protected from dust, and is capable of withstanding water immersion between 15 cm and 1 meter for up to 30 minutes.

On the body of the Aegis, there is an exposed metal rim that contours the leather inlay. On one side, Geek Vape is engraved. On the other, Aegis is engraved. The 510 connector on the Aegis Legend is centered, and in my opinion, this makes any tank look good when sitting on the device. Next to the 510 connector, you’ll see a silicone-rubber plug. Remove it, and you’ll find the micro-USB charging port.

There are three buttons on the Aegis Legend: one large “rocker style” fire button, and two smaller adjustment buttons. The fire button has a very ergonomic shape that lets your thumb or index finger rest naturally. This makes it very comfortable to use, as it’s super easy to reach and use the fire button. The placement is perfect, and it also takes just the right amount of pressure to push it. It’s not too difficult, but it isn’t overly easy either, where you could accidentally fire it. The adjustment buttons are located on the bottom of the device, and also have a curved shape.

The display on the Legend is a little small at 0.91 inches, but it is very easy to read and super crisp. For durability purposes, it appears that GeekVape have used an impact-resistant plastic rather than glass on the Legend. This only makes sense when building an “indestructible” device, and it does not compromise the clarity or quality of the display in the slightest. The screen is still extremely easy to read and use.

The Aegis Legend takes dual 18650 batteries, and it houses them within a 40hrc carbon steel battery door. This battery compartment is extremely tight and so you have to be careful when removing your batteries, or else you’ll end up with knicks and rips in your battery wraps. This is one thing that I disliked about the Aegis Legend, as it really makes it a pain to remove your batteries from the device.

On the battery door there are venting holes for safety, and a latch to lock it. This latch is very stiff, but I found that pushing down on the door at the same time helped to open it.

The Aegis Legend is a dual 18650 battery box mod, and is powered by Geekvape’s own AS chipset. To turn the device on or off, click the fire button five times fast. To lock the controls, hold both adjustment buttons simultaneously. Pretty standard.

The Legend is packed with a variety of modes: Power, Temperature Control, TCR, VPC, & Bypass modes. The AS chipset will fire at up to 200W in Power, and from 200-600F in TC. As you would expect, the Legend supports TC with Ni200, SS, and Titanium, and also supports custom curves.

Interestingly, the Aegis Legend has VPC mode, which stands for variable power curve. This mode allows you to set five different wattages in intervals of one second each, and allows you to customize your wattage mode vaping experience.

The UI displays your current mode at the top of the screen, as well as your wattage or temperature in large print. The display also shows your individual battery life, coil resistance, voltage, amperage, and a puff counter. You can adjust the brightness of the display by holding the power and adjustment buttons.

To change modes, quickly press the fire button three times. Now, you can change modes using the adjustment buttons. You can also lock the resistance of your coil, or reset your puff counter by pressing the fire button a single time once you’re in the menu. Once you’re in the menu, you can also change the color of the UI by holding both adjustment buttons simultaneously.

There is also a stealth mode on the Aegis Legend that can be activated by holding the power button and both adjustment buttons at the same time. Neat. 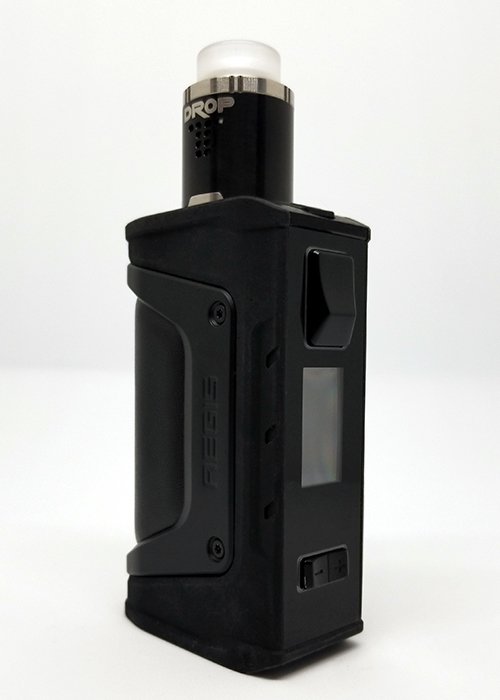 In power mode the Aegis Legend performs very well, and fires near instantly when you press the fire button. On the other hand, the temperature control mode with this device is a little lackluster, and hardcore temp control enthusiasts will be disappointed.

The Variable Power Curve mode on the Legend is pretty neat, and works very well. It’s a little gimmicky, but it does give you finer control over your vaping experience. You can set the wattage to ramp up and taper off evenly, giving you a smoother hit.

The battery efficiency of the AS chipset was a bit disappointing, and I found my battery draining extremely quickly using a 0.22 coil at 50-65W with dual Samsung 30Q’s. The indestructible beast is also a power-thirsty beast.

In terms of reliability, the Legend is a great mod and I didn’t have any sorts of technical problems or issues. If you’re someone who doesn’t really use temperature control mode and are more of a wattage mode vaper, I can see the Aegis Legend being a perfect device.

What’s the final verdict on the Aegis Legend? The device is a well constructed and sturdy box mod that can survive abuse. If you work or play in a demanding environment, or even if you’re just clumsy, the Aegis Legend is the perfect device. The silicone rubber exterior is great at absorbing shock, and the IP67 dust and water resistance are an added bonus.

The aesthetics of the device are beautiful, but the power mode performance of the Legend is where it truly shines. VPC mode is an interesting feature, however the temperature control is a bit lackluster.

Overall, the Aegis Legend is a sturdy device that is very solidly constructed. While the battery life and temperature control mode could be improved, the power mode is very good and makes it a great device for wattage-only vapers. Stay Versed!