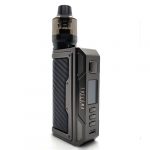 Lost Vape produces all sorts of vaping hardware, but most vapers will know them for their high-end DNA mods. Lost Vape is perhaps the most popular and well-known vaping company to manufacture mods using DNA chips, which are widely considered the most accurate and most reliable chipsets for temperature control mode. If you’ve ever used a mod with a DNA chipset then you know how good it is.

But performance doesn’t come cheap. You’re looking at well over $150 USD for a modern DNA 250C mod and quite frankly, that’s more than a lot of vapers want to spend. Lost Vape realized this a long time ago and so they started producing their ‘Quest’ line of devices. The goal here was to offer more affordable mods that still deliver performance well above your ‘average’ mod.

The latest mod in the Quest line is the Thelema Quest. It’s just like the Thelema DNA 250C mod but without the DNA chipset. It takes dual 18650 batteries and has a maximum wattage output of 200W. It uses the Quest 2.0 chipset and comes with VPC, bypass, power, voltage, and TC modes. The kit comes with the UB Pro Pod tank and two coils, a P1 0.15Ω coil and a P3 0.3Ω coil.

Rather than shelling out over $180 USD for the Thelema DNA250C, should you just grab the Thelema Quest kit instead? 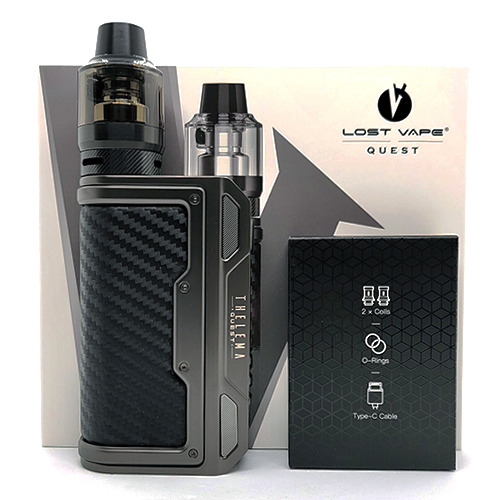 The Thelema Quest is nearly indistinguishable from the Thelema DNA250C. It looks like Lost Vape used the same materials and processes to make this mod as they did for its DNA counterpart and just changed a few small things to identify it as the Quest version.

The only differences are that “Thelema Quest” is printed on one side of the frame, and there’s no LED indicator underneath the fire button. Oh, and the Quest has a Type-C charging port; a big upgrade! The build quality is as good as it gets, so much so that I frequently forget that I’m holding the ‘Quest’ mod and not the much more expensive DNA mod.

The frame is made of zinc-alloy and features 4 mesh grills for decorative purposes. This frame comes in 5 different colors, with the color depending on the pattern that you select for the grip on the battery cover. There are 11 options available, including clear which lets you see into the battery bay, as well as carbon fiber, and calf leather. The grip on my Gunmetal Carbon Fiber unit is firm but with a little give. It’s a comfortable grip that looks and feels good. 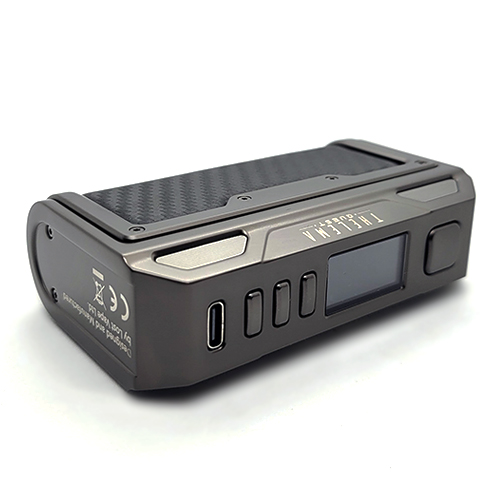 The battery cover slides off horizontally with a good tug. It’s held to the mod by magnets which are ample in strength. The cover does not move, wiggle, or rattle at all during day to day use so it’s pretty secure. Inside there’s enough space for two 18650 batteries. The top contacts are spring loaded and provide a snug fit for the batteries but it’s not too tight as to damage the wraps. There’s also a battery ribbon to make removing the batteries easier.

The design of this mod is attractive and really, why wouldn’t it be? It looks just the same as its much more expensive DNA counterpart, a mod that was designed to be good looking. The build quality is similarly as good as the DNA version and that’s surprising considering that the Thelema Quest kit costs less than half of the DNA mod by itself. After all though, the DNA mod is the expensive component. Let’s move on to the UB Pro Pod tank. 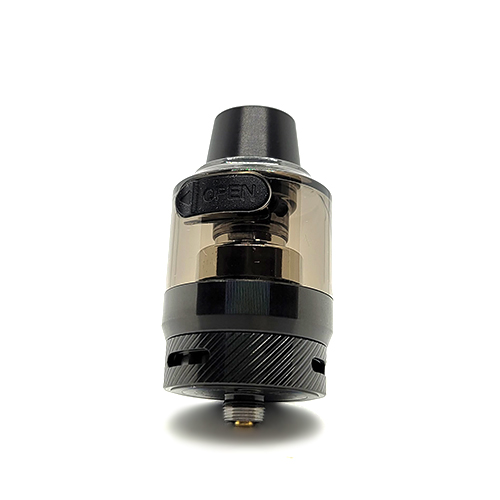 The UB Pro Pod tank that comes with this kit is the same as the one that comes with the Cyborg Quest kit that Jamie reviewed a few weeks ago. It’s a standard looking tank with a 5ml plastic tank rather than glass so it’s not going to break easily. This tank has a side-filling port that is plugged by a rubber bung. The fill hole is big enough to accommodate all sizes of ejuice bottles, even those large 100ml ones. Since the fill port is on the side you have to hold the tank sideways to fill it up all of the way.

This tank uses a conical shaped 810 drip tip that gets narrower near the top. You can use your own 810 drip tips with this tank no problem, as long as they have the o-rings on the drip tip itself.

Coil installation is easy. First you have to unscrew the airflow control ring/base of the tank. Once you do this, you can push the coil into the bottom of the tank and screw the base back on.

The airflow control ring features three airflow slots and the ring spins freely without a stopper. When I first started using the tank it was quite firm, but after being used and lubricated with ejuice it spins a little too easily.

There is a slight issue with this tank that I would like to address — you can’t fully take the tank apart to clean it. The plastic tank is built as one piece with the ‘top cap’ so there’s no easy way to thoroughly clean it out. If you’re a vaper who does not like the mix ejuice and prefers to wash the tank good before using another coil, it’s a little difficult to do. The best way to do it with this tank is opening the fill port and running water through the coil insert opening. It will clean it out, but not as good as I would like.

The airflow is smooth and free of turbulence. It does have a little bit of restriction, but it’s still very much a direct lung tank. 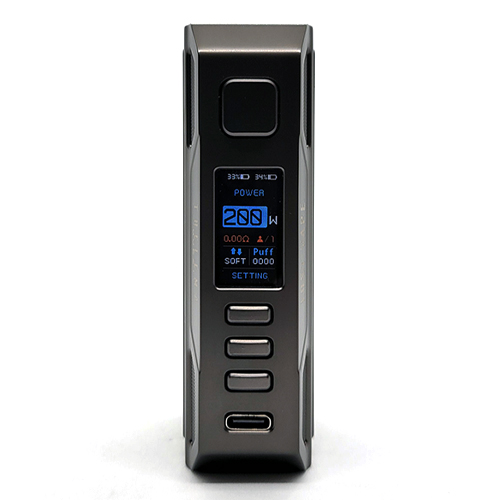 You would think that the Quest version of this mod would be lacking in features. Well, the Thelema Quest features many of the same features as the DNA version, but it is missing some of the modes that need a DNA chip to work like Replay mode and Boost mode.

The Thelema Quest uses the Quest 2.0 chipset and takes dual 18650 batteries. The modes that you get are Power, TC, Bypass, Voltage, Custom Power Curve modes. It can fire up to 200W in power mode and from 200-600°F in TC. There’s support for Nickel, Titanium, SS316L, and SS904. There does not appear to be a TCR mode or a way to adjust the TCR value for each material.

For example, to change modes you would use the up and down buttons to highlight the mode. Pressing the select button will then allow you to use the up and down adjustment buttons to scroll through the different modes. When you have reached the mode you desire, press the select button again and you’re done. The same method can be used to change the wattage, temperature, reset the puff counter, or enter the settings menu.

The settings menu doesn’t have a lot but there are a few things in here that are useful. The ‘Atomizer’ option lets you remeasure your coil resistance if it’s not reading correctly (which I haven’t had happen, this mod is pretty accurate). You can also adjust the wattage or temperature from here as well.

Other options in the menu allow you to change the screen brightness, UI color, reset the settings, or set user profiles. You can set 3 user profiles which can easily and quickly be selected from the main menu. For example, you can set the first profile for temperature control at a specific wattage and temperature, and profile 2 for wattage mode at specific wattage and hardness (soft, normal, or hard). This lets you quickly go from TC to wattage mode without having to manually adjust the settings each time and I found it rather useful.

While the Thelema Quest does lack some features exclusive to DNA mods, the UI and features that it does have are still nearly just as good. 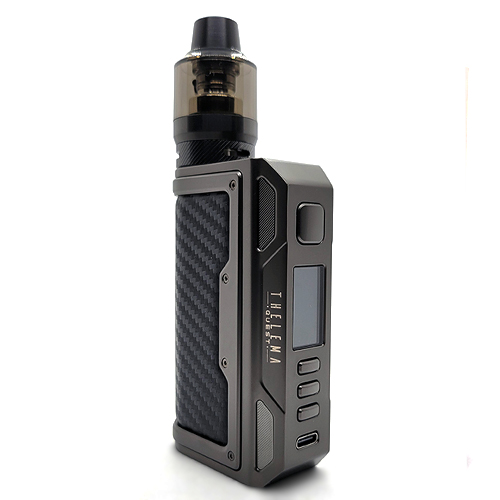 I’ll start this performance section by talking about the mod and then I will move on to the tank. The question that some, or even most of you, might have about the performance is “Does it perform as well as the DNA version?” and to that I would say no. After all, what would be the point of the DNA mod if this was just as good? But surprisingly, even though the Thelema Quest isn’t as good as the DNA version, it’s not too far off.

Firing happens instantly when I press the button. The power output is consistent and powerful, outputting what it says it is outputting with no hesitation. The chipset is also very accurate in identifying the coil resistance. It reads 0.30Ω and 0.15Ω for each of the different coils every time. I even tried a few RDAs on it and it read the resistance the same as my Ohm reader.

Efficiency of the chipset seems good. My batteries don’t drain any more quickly than with any other mod, but they don’t last very long either. Firing at high wattages with this mod isn’t going to allow you more than a few hundred puffs and that’s to be expected. But it does have Type-C charging if you find yourself absolutely needing a charge and you don’t have access to a dedicated battery charger.

The UB Pro Pod tank is a good tank to come included in a kit. It delivers a lot of flavor, no matter which of the two coils you use. Starting with the 0.15Ω coil, this coil is rated for 70-90W. It’s good even at the lower end of the wattage rating and gets much better as it increases. When up to 90W it’s as good as it gets with lots of flavors and dense, saturated clouds. I preferred to keep the airflow open for large clouds and huge direct lung draws.

Going to the 0.30Ω SS904 coil is where you get to test out the TC capabilities of this mod. This coil is good from 60-70W and for 500-550°F. I settled at 65W and 540°F as the perfect spot for this coil. The Quest chipset slowly reduces the power as the coil gets too hot, but allows you to keep drawing to your heart’s content. It’s really good at moderating the temperature and does it in a way that isn’t too intrusive while still preventing dry hits.

While the TC performance is good for a non-DNA mod, it’s still not as good. DNA chipsets have a level of sophistication with the chipset that regulates the temperature better, allowing you to go right to the edge of a dry hit before reducing the power output so that you don’t get one. The Quest chipset feels like it cuts and reduces power a little early, but it’s not going to be especially noticeable if you have not used DNA mods extensively in TC mode. The Quest chipset is very good for the price point though.

The Thelema Quest is no DNA mod, but for the price point there’s no question that it’s worth picking up. Lost Vape has done a superb job of making a high-quality mod that is packed with features and that still performs nearly as well as much more expensive mods. The kit is worth grabbing thanks to the great flavor from the UB Pro Pod tank and coils. You can start using temperature control mode straight away with the kit and it’s a very good experience indeed.

If you want a kit that can get you straight into temperature control mode at an affordable price, there’s no better kit or mod available right now for the purpose.