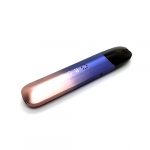 The Moti S Lite is the latest pod system from Moti. It’s a closed pod system that uses pre-filled, flavored pods so it’s extremely simple to use. Simply insert a pod and you’re ready to vape. When the eliquid in the pod is finished you just replace it with another pod.

At the moment there are six flavors available: Exotic Passionfruit, Cafe Latte, Tropical Pineapple, and Delight Mandarin, Chilled Time (Cola), and Fresh Mango. These pods use nicotine salt eliquid and come in either 2% or 5% strength.

Moti states that the Moti S Lite pods use a “FEELM” ceramic heating element that, combined with the chipset on the Moti S, regulates the power and temperature of your vape to deliver optimal puffs every time. It’s also supposed to ensure that every drop of eliquid is vaporized evenly to make the flavor as full as possible. This all sounds good to me but does it actually work? You’ll find out in this review. 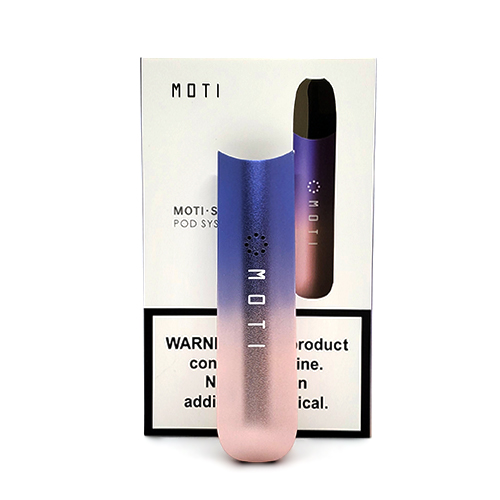 If you purchase the Moti S Lite device alone there are no pods included so make sure to pick up a pack of pods to go along with it. Each pack of pods comes with 3 pre-filled pods. 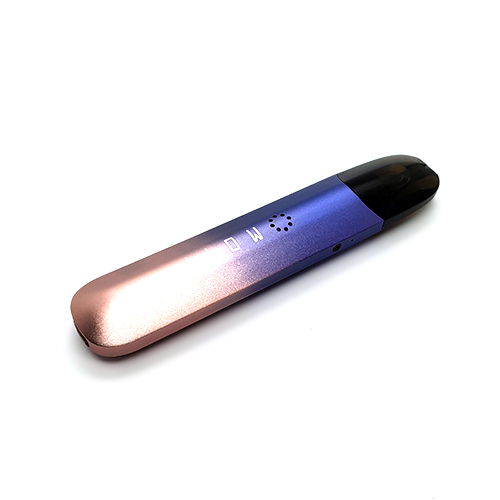 One thing that the Moti S Lite definitely has going for it is its looks. It’s a super sleek device with a refined and modern design. It’s really quite stylish and it both looks and feels like a premium device. It comes in four colors: Knight Black, Sunset Violet, Lagoon Blue, and Flame Red. The Sunset Violet color that I received fades from a deep purple to a light pink and the paint is semi-metallic. Moti definitely picked the right color to send me for this review — I love it! The quality of the paint seems to be good as it’s remained perfectly intact while I’ve been using it and still looks brand-new.

In addition to its good looks, the Moti S Lite has a comfortable shape that curves in so it’s comfortable to hold too. It’s only a little bigger than your average disposable vape at 83mm tall, 21mm wide, and 13.5mm deep and it weighs just 27.5g with a pod inserted. That’s impressively small and light considering the solid build quality and solid feel. I’ve had no trouble carrying around the Moti S Lite and a few pods in my pocket or purse. Honestly, it’s easy to forget that it’s even there.

On the front of the Moti S Lite there’s a ring of LEDs that lights up white when you insert or remove a pod. The device also has haptic feedback and vibrates when a pod is inserted. The pods attach to the battery with 2 strong magnets and also click into place. The magnets are strong but not strong enough to pull the pod completely into place so you have to be sure to completely push it in. 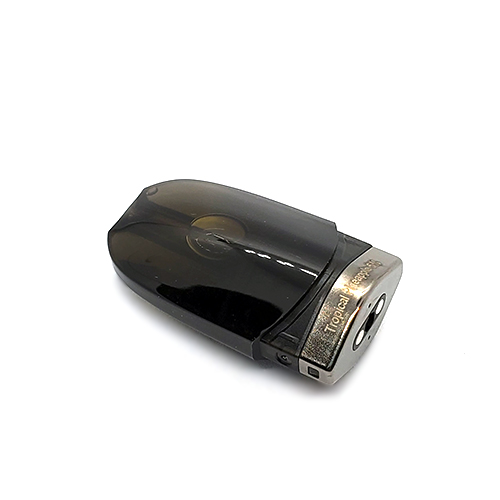 The pods are quite tall and this gives a lot of room for your lips when it’s inserted into the battery. The pods follow the same shape as the rest of the device so they look almost built-in, like the whole device is one piece, when they’re inserted. Like a lot of other pods, these pods have a dark tint on them so you have to hold them up to the light to see your remaining ejuice. Each pod comes pre-filled with 1.8ml of ejuice.

According to Moti, these pods have a five-layer leak proof design. It seems to work well as I have experienced any leaking or condensation from the pods whatsoever. These pods use a ceramic FEELM coil inside.

On each side of the Moti S Lite there’s a very small, pinhole sized airflow hole. The airflow on the Moti S Lite is non-adjustable so the amount of airflow you get is how it is. The draw is a good MTL draw so if that’s what you’re after then you’ll be happy. More on the draw later in the performance section of this review.

That’s about it for the design and build quality. There’s really not that much to this device but it has a beautiful design and very good build quality. Whereas other pod vapes try to do it all and overwhelm the user with a plethora of options, the Moti S Lite keeps things simple and easy to manage.

How to Use the Moti S Lite 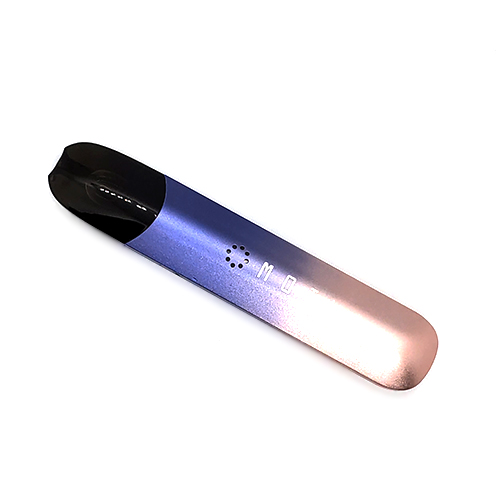 Like the design, there’s not much that you have to be aware of in order to properly use the Moti S Lite. However, there are a few features that automatically work their magic in the background for a better vaping experience and I’d like to mention them briefly.

The first is the MCU chipset. According to Moti, they gathered data from over 2 million users to generate an ‘ultimate output power curve’. Using this data, the Moti S Lite can control how quickly it heats up the coil and also regulate the temperature of the coil. In layman’s terms: you’ll get a warm vape that is flavorful and free of dry or burnt hits.

Another feature of the MCU chip is its ‘smart wattage adjustment’. This is similar to the above mentioned feature in that it regulates the wattage to the coil, but it also “instantly heats the -eliquid when using a new pod to avoid cold start”. What I take from this is that there’s no ramp-up or break in time when using a new pod; the Moti S Lite will start vaporizing the eliquid at an optimal wattage and temperature right away.

The Moti S Lite has one feature that you can manually turn on and that’s the Turbo Mode. When you remove and insert the pod 4 times quickly, the LED will light up purple. This sets the output wattage to the max and for a stronger draw. I like the mode and how it works but unfortunately, Turbo Mode turns itself off after 3 draws or 60 seconds, whichever comes first. This is pretty annoying because if you want to keep it exclusively in Turbo Mode, you can’t. I’ve also found it to be easier to activate with certain pods than others. Some pods fit so tightly that it’s hard to remove and insert them quick enough to activate Turbo Mode. 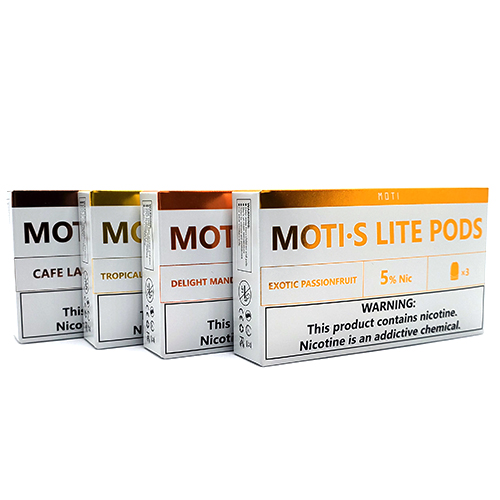 Moti currently offers 6 different flavors of pods: Exotic Passionfruit, Cafe Latte, Tropical Pineapple, and Delight Mandarin, Chilled Time (Cola), and Fresh Mango and from what I can see, Moti will be releasing a new flavor every month. The pods come pre-filled and are not refillable. At the moment it doesn’t look like Moti sells empty refillable pods but this could change in the future.

Tropical Pineapple has a distinctly pineapple taste that is sharp and almost tart. It’s a mildly sweet flavor with a noticeable menthol kick. The best way to describe it would be pineapple juice and menthol. In my opinion this is the best flavor of the lot and it’s one that I always find myself reaching to vape on. The throat hit is good but it’s even better in Turbo Mode.

This pod flavor has a strong and citrusy mandarin taste that is very accurate. The menthol is much stronger than Tropical Pineapple and very cool and chilly. The sweetness is just right and not too dull. This pod takes a close second to Tropical Pineapple for me.

Coffee flavors aren’t usually too good or accurate. I find that they’re either overdone or don’t taste anything like coffee. This flavor is actually pretty good though. It definitely has a strong coffee taste that is slightly bitter but slightly sweet. There’s almost no menthol. The vapor is very heavy which also makes the throat hit very strong. More sweetness would do this flavor well but it’s okay to vape on as it is.

This is a decent passion fruit flavor. It’s not as sweet as Tropical Pineapple or Delight Mandarin, but it’s also not as cool. There is enough menthol here that you’ll notice the cooling but it’s toned down enough that vapers who don’t like menthol can still enjoy it. The sweetness is right and the flavor tastes natural. There’s a little bit of bitterness to it too. Overall a pretty good flavor. 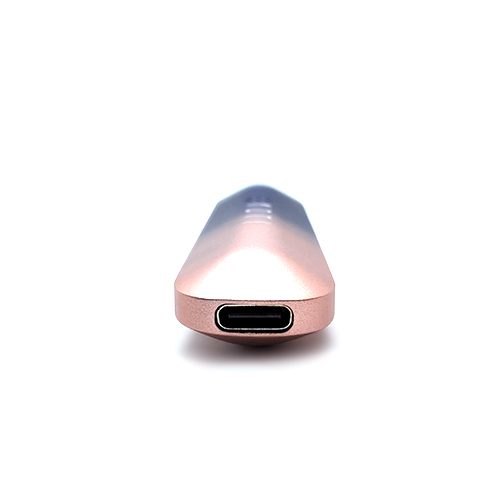 The Moti S Lite only has a 400mAh battery but because of the 6-8W output, it lasts for an impressive amount of vaping time. Using it on the standard power mode you can expect to reasonably get 2 days of vaping out of a charge. Of course, if you use turbo mode often then you will experience slightly shorter usage times. Still, 1-2 days from a 400mAh battery is nothing to scoff at.

The LED on the front will light up white when fully charged. As the battery dies, the LED will change to blue, then to green, then to red. When the LED reaches the red level I would suggest charging it soon because that means the battery is close to dying.

The Moti S Lite recharges using Type-C charging. The port is located on the bottom of the device. It takes about 1 hour to fully recharge the device. That’s a little long for such a small battery but it’s not terribly long. While charging the LED will start off red, then change to green, then blue, then white. When it’s fully charged the LED will turn off. 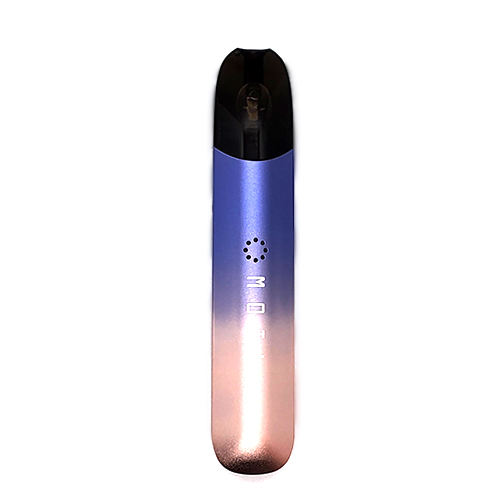 As far as the flavors are concerned, I’m happy with the ones that I was sent. They all taste good, but the cafe latte isn’t really my type of vape. The other fruit flavors are good though and tasty to vape on. I enjoyed vaping on them and I think that you will too.

Aside from the flavors, the overall performance of the device has been solid. The MCU chip does a good job of regulating the coil temperature. I haven’t noticed it observably cutting the power or anything, but I haven’t had any dry hits or burnt hits at all. I even tried pushing the pods to their limit by taking long draws one after another and there was no noticeable difference in vapor quality. Each draw still tasted great, with no dry or burnt flavor at all.

Throat hit with all of the flavors is solid. Turbo mode even turns the throat hit up a notch but again, it can only be turned on for 3 puffs at a time. Still, the standard draw gives a good draw that is satisfying enough.

The Moti S Lite is a generally solid closed-system pod vape. The design is attractive and the build quality is great. The flavors that I tried all taste good and they’re satisfying to vape on all day. I think that the ease of use is the biggest thing that it has going for it though as you can buy the device and a pack of pods and start vaping without having to do anything else. I can see this being attractive for new vapers or anyone looking to simplify their vaping experience.

Personally, I like the extra warmth and ‘oomph’ that Turbo mode gives so it’s disappointing that it can only be turned on for 3 puffs/60 seconds at a time. Turning Turbo Mode on is also somewhat annoying depending on the pod that you’re using. A button would have been a lot better and easier.

If you’re looking to simplify your vaping then I can easily recommend the Moti S Lite.