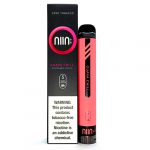 NIIN Air disposables are the latest option for vapers looking for something simple and easy to take out of the house. They have a nice modern design, feature an airflow adjustment dial, and they are rated for 2000 puffs. What’s neat is that these are made by Juice Head, an ejuice company that is known for their extremely popular and tasty flavors.

Are NIIN Air disposables worth buying, or are you better off going with one of the many other options that are available? 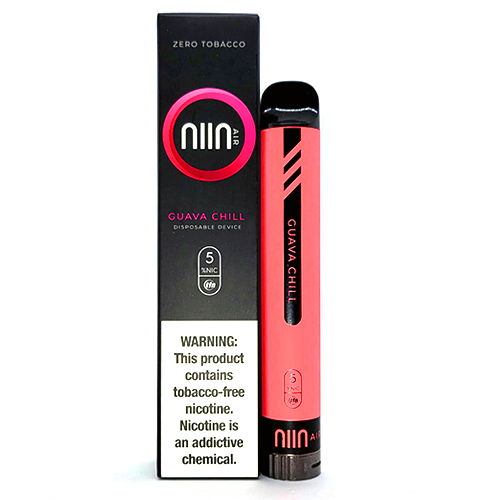 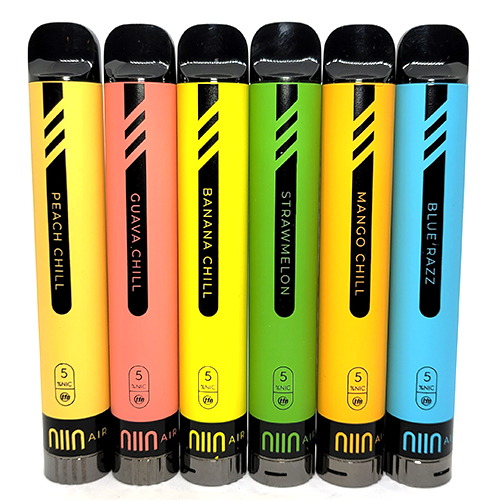 One thing that I like a lot about these disposables is the design. They have a modern look to them that is much more attractive than those rectangular shaped disposables of the past. These are tube-shaped and feature a soft-touch body with glossy accents.

The color of the body is nicely matched to the flavor inside, so it’s easy to know which one you’re grabbing. The soft-touch texture feels great and the gloss black accents add some flair. The mouthpiece is a duckbill shape that is really comfortable to use and conforms nicely to my lips.

Size-wise, these are average for a disposable vape. They are rated for 2000 puffs, but they aren’t any larger than a ‘standard’ disposable which is great. NIIN Air disposables only come in one nicotine strength and that’s 5% (50mg).

As I mentioned in the intro, these are made with tobacco-free, synthetic nicotine. This is the same as the tobacco-derived nicotine that is found in most other disposables and vape juices, only it’s made in a lab. At no point is tobacco involved, which is interesting. 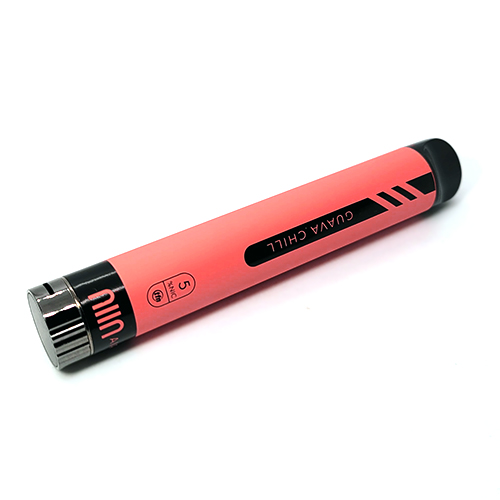 Located on the base of the NIIN Air’s is an airflow adjustment ring. This does not work on a stopper so you can continuously turn it whichever way you like. This ring has some resistance to it and will stay where it is set. I’ve played around with it quite a bit and it hasn’t loosened so it should remain firm for the life of the disposable.

There is a blue LED on the bottom that lights up upon taking a draw. This LED isn’t very bright though so these are still pretty discreet even in the dark. Since air flows in through the side airflow ring, you can cover the LED if you want and it’s not going to be an issue.

NIIN Air disposables come in six flavors: Blue Razz, Guava Chill, Banana Chill, Peach Chill, Mango Chill, and Strawmelon. From the names, you can see that these are mostly mentholated flavors, however the cooling isn’t too strong so even those who don’t particularly like menthol might still enjoy them.

This is described as being strawberry and watermelon, but I find that it tastes more like strawberry and honeydew/cantaloupe. It tastes great, and it’s probably my favorite flavor, but I just don’t taste watermelon. The strawberry flavor comes in lightly on the exhale, followed by strong notes of melons and some menthol cooling. It’s not overly sweet, which I like.

What I’ve found about these disposables is that they’re very accurate in taste to the real fruit that they’re replicating. Guava chill tastes just like guava with a blast of menthol. Like the real fruit, it’s not too sweet but still sweet enough that it tastes good. It’s an authentic and natural taste that guava lovers won’t be able to put down. I’m not even that big of a guava fan and I can’t stop vaping it.

Super accurate and natural mango flavor here. The menthol isn’t as strong as Guava Chill, but it’s still noticeable and present. This is somewhere between a mango gummy and the actual fruit; sweet but not overdone. If you like mango flavors then I would highly suggest getting this disposable.

This is undeniably a peach flavor and it’s good, but if it was just a touch sweeter I would love it instead of just like it. The menthol is like Mango Chill in that it isn’t very strong, but still strong enough that you can feel it. Again, natural tasting peach but not sweet enough for my liking. For a tasty disposable that isn’t too sweet, this is a good pick.

Banana Chill is more similar to a banana candy than to the fruit. It’s very sweet and sugary, not like a real banana at all. It has that banana taste, no doubt, but it’s the outlier of the fruit flavors here in that it’s more candied. It works though. I can’t vape this consistently without switching it up, but it’s definitely the one to get if you have a sweet tooth and like banana candy flavors. 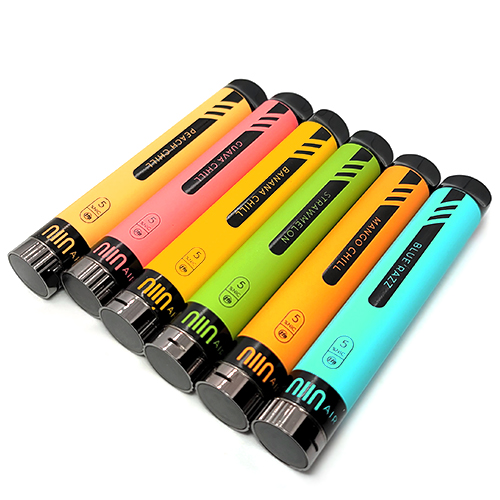 As I mentioned earlier, these disposables use tobacco-free, synthetic nicotine. Now, I’m not sure if this has anything to do with the performance, but I feel the nicotine a lot more than with other 5% disposables. They’re very, very satisfying to vape on (almost too much so for even me, a veteran vaper).

Even though they feel like they deliver a lot of nicotine, the draw is still super smooth. If I’m not careful, I end up vaping these too much and get a big head rush. They’re dangerously smooth! These have one of the best draws out of any disposable I’ve tried, and I can’t help but feel that the tobacco-free nicotine has a lot to do with it.

Five of my six disposables are still functioning great with no sign of performance drop or flavor drop off but Strawmelon, the one that I vaped the most, is starting to taste a little burnt and dry. I’ve used these for the better part of 2 weeks though and I think that I got at least 1500 puffs out of the Strawmelon (although I didn’t count) so that’s not bad at all.

I’ve had no leaking or performance issues to speak of with any of these devices. The draw activation works perfectly even with the airflow fully open and it doesn’t take a lot of effort to get it to go.

Juice Head has a clear winner with their NIIN Air disposables. These are all-around some of the best disposables out there. The design is attractive, comfortable, and compact. The airflow adjustment ring is a nice touch, allowing you to further refine an already great draw. The flavors are all really, really good, and the experience of using these is ultra satisfying.

The only possible downside that I can see is that these deliver a draw that is much more powerful than other 5% disposables that I’ve used, which could be a problem for anyone that isn’t already a heavy vaper/smoker. If you think that you’re used to vaping 5% disposables, just give these a try and they will change your mind.

All things considered, NIIN Air disposables are some of the best disposables out right now and they easily get my recommendation.