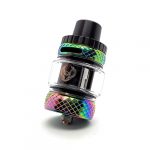 Well it’s 2022 now and HorizonTech have recently released a new tank, the Sakerz Master tank. It features a top airflow design and uses new Sakerz Master coils that, like the Falcon series coils, are made with a combination of wood pulp cotton and mesh.

The Sakerz Master tank has a 28mm base diameter, a 5ml max capacity tank, and it comes in 5 colors.

This tank was sent to me by HorizonTech for the purpose of this review. This does not in any way affect my opinions or ratings of the tank.

The Sakerz Master tank looks completely different from HorizonTech’s previous tanks like the Falcon 2 or Falcon King. It has a “diamond-cut design”, essentially diamond cross-hatching, on the airflow control ring and base of the tank which makes it look sort of blingy. It kind of reminds me of a disco ball. I definitely prefer the look of the Falcon tanks much better, but in the darker colors I think that the Sakerz Master tank looks alright. There are 5 colors currently available for purchase.

Compared with the Falcon 2 and Falcon King, the 28mm base diameter is a little bigger, putting it on the larger side of sub ohm tanks. Using the included and pre-installed bubble glass will allow you to fill up to 5ml of ejuice in the tank. It also comes with a spare straight glass that can hold up to 3.5ml.

The drip tip on here is an 810 that fits into the top cap by pressure fit. There are no o-rings in either the top cap or on the drip tip itself, but other drip tips can still be used without an issue. This goes for drip tips with or without o-rings, they all fit just fine and aren’t loose at all. The drip tip that comes with the Sakerz Master is taller than a standard 810 and wide bore. It narrows towards the top and is comfortable to vape on.

The top cap comes off with a quarter turn which then gives you access to the fill port. Threading is smooth and the cap comes off and goes on nicely. There is some force needed to remove the cap which makes it quite secure, even in a pocket. 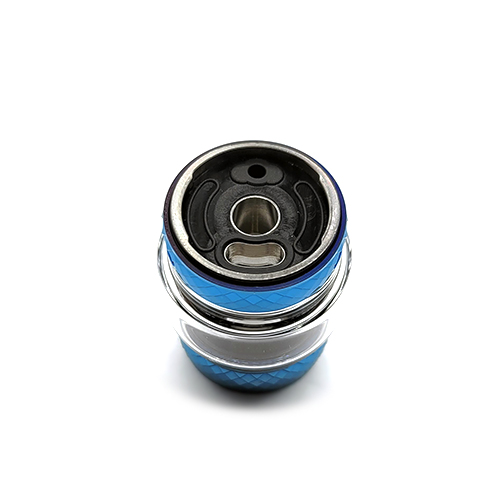 I had no trouble filling up with a chubby 100ml ejuice bottle as the port is nice and big. There’s also an air relief hole opposite the fill port to make filling easier and reduce any chance of pressure in the tank that can lead to leaking.

One thing that I dislike about the design is that the top cap is black no matter which color tank you get. This looks fine with the black and gunmetal colors, but it looks out of place on the others. In my eyes, a color matched top cap would have made the blue, silver, and rainbow colors much more attractive.

Unlike their previous bottom airflow Falcon tanks, the Sakerz Master has the airflow control located at the top of the tank, just under the top cap. When you draw, airflow enters through the two, wide slots. It’s then channeled down to the base of the tank, in through the coil, and finally out the drip tip.

While the previous Falcon tanks never had any problems with leaking, this top airflow all but guarantees that there won’t be any leaking from the Sakerz Master tank. In my day to day use, it did not leak even a single drop. Not from the top cap, not from the airflow, and not from under the coil in the base of the tank. 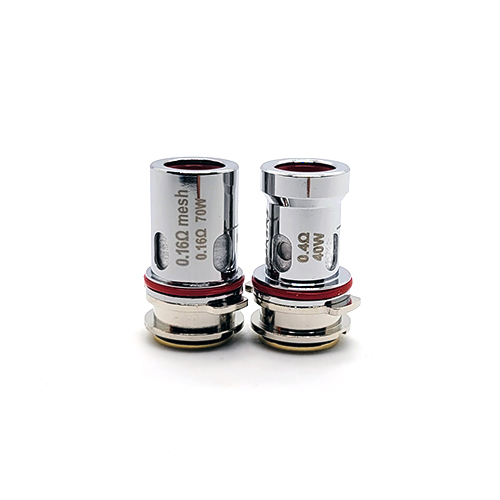 Like the Falcon coils, these coils are made of a combination of wood pulp cotton and mesh. HorizonTech says that this increases their absorption and enhances the flavor. It certainly did for their Falcon tanks and as a small spoiler before the performance section, it seems to do so for the Sakerz Master tank as well.

To insert or remove a coil you just have to unscrew the base of the tank. The threading here is buttery smooth. The coils push into the bottom of the tank with ease. There are notches on the coils that line up with notches in the ‘cage’ that holds the coil. Just line these up and the coil pushes in effortlessly. The notches are nice because this way you know that you’ve correctly installed the coil.

Removing the coils is a bit more difficult than installing them. It’s a snug fit so it can be hard on the nails to remove it once it’s in there. For this reason, there’s a coil removal tool included in the package. It makes removing the coils a breeze and I’m thankful that they included it. 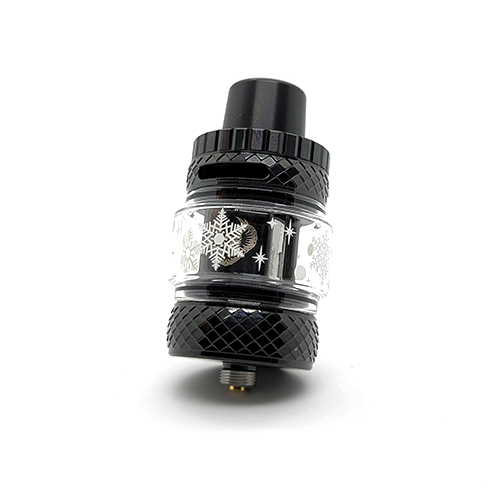 I ran a bunch of different ejuices through each of these coils, most being 70VG, but I also used 80VG as well.

I started off with the 0.16Ω coil because it’s the one that comes pre-installed in the tank. This is a fine mesh coil and the flavor from my ejuices comes through like crazy. This coil is rated at 70W with no wattage range. I tried vaping at 70W but I felt that it was still underpowered so I increased the wattage to 75W. It was better here, almost perfect, but I still felt that there was a small adjustment needed so I increased the wattage to 77W and this is where I felt that this coil performed best. I got really flavorful draws that tasted almost wet, that’s how insane the flavor is from this coil/tank.

This coil delivers a nice direct lung draw that is loose, but isn’t too airy. I liked leaving the airflow all the way open, but closing it down a little bit was nice too.

The 0.40Ω coil is a traditional mesh coil with wider spacing in the mesh. Because of this, it’s not as flavorful as the other coil but it’s still enjoyable to vape with. The experience with this coil is totally different too because it’s a restricted direct lung draw that can be taken down to a very restricted direct lung draw. This coil is rated at 40W but like the other coil, it does better a little higher up at 45W. I also left the airflow mostly open for this coil, but closing it down ¼ of the way was the sweet spot for me.

The airflow on this tank isn’t too loud and there’s no whistling which is nice. It also hasn’t leaked at all and when I’ve checked the base of the tank under the coil, all that I’ve found is normal condensation.

This almost goes without saying, but this is a tank that is going to deplete your ejuice quickly. The 0.16Ω coil in particular is a thirsty one and I’ve found myself refilling twice a day sometimes while using it. The 0.40Ω coil is less hard on the ejuice, but depending on how much you vape, you might want to keep some ejuice with you at all times.

I ran through 75mL of ejuice with the 0.16Ω coil and it is still performing great. I used the 0.40Ω coil a bit less, running through 50ml, and it’s still going strong as well. Excellent coil life overall from these two coils.

I mentioned in the introduction that the Falcon 2 and Falcon King are two of the best sub ohm tanks out there, even now in 2022. But is the Sakerz Master tank better? Yes, yes it is. I didn’t think that there was a lot of room for improvement, but after using this tank and experiencing it for myself, I can definitely say that an improvement has been made. This is a truly leak-free sub ohm tank thanks to the top airflow, and it really doesn’t compromise on flavor at all. These new Sakerz Master mesh coils are wonderful and really bring the flavor game to another level.

Are there cons to this tank? Yes, a few in my opinion, but they’re mostly related to the design and not to the performance. If you can live with the blingy look of the tank and the black, non-color-matched top caps, the performance and vaping experience with the Sakerz Master is probably the best that you can get from a subohm tank.