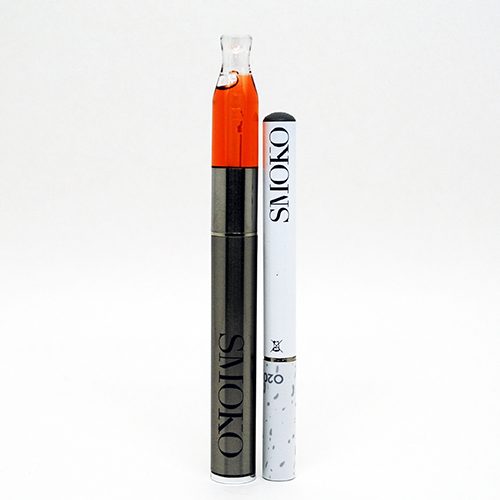 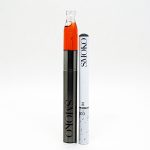 SMOKO is a vaping company that you may not have heard of (I myself hadn’t before this review) but they’re extremely popular in the UK. Their simple and discreet cig-a-like devices offer a tight MTL draw with a throat-hit comparable to that of traditional cigarette — without the thousands of cancer causing chemicals found in the real deal.

SMOKO offer three different devices, all of which are small, light and portable. They sent me two of these devices for review: their E-Cigarette starter kit and their Vape starter kit. Both devices are tall and slim and come with 18mg/ml or 20mg/ml pre-filled pods. However, you can also get refills in 0mg, 11mg and 15mg strengths as well. Their refills are all made in the UK — a change from most other closed systems — and come in a variety of different flavors.

In this SMOKO review, I’m going to go over these two devices and give you the full rundown on everything you need to know. The devices used in this review were sent to us free of charge, directly from SMOKO. 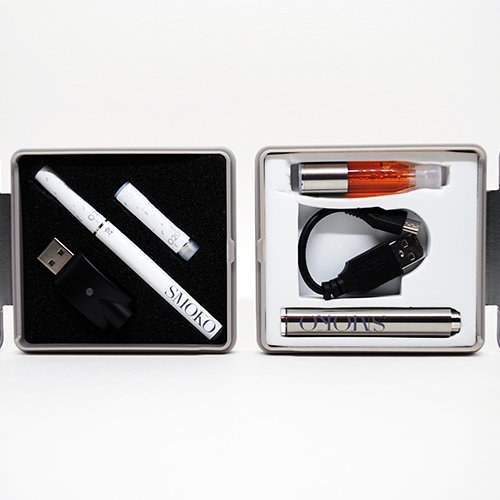 Each SMOKO starter kit comes in a small, classy metal case. Inside the case you get everything you need to get started vaping: 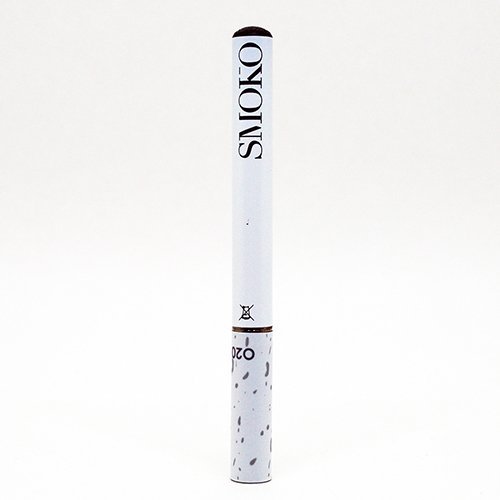 With the pod attached the SMOKO E-Cigarette starter kit is just about the same size and shape as a real cigarette. There are two parts to the device: the battery and the pods. The battery charges using a unique USB charger that comes with the kit. This charger screws onto the top of the battery which can then be plugged into any USB port. The pods are opaque, and there’s no way to see your ejuice level. Rather, when the vapor production decreases dramatically and there’s no longer much flavor then that’s when it’s time for a new refill.

It’s a very light device but it still feels sturdy and well-built. You can throw it in your pocket and it adds virtually no weight to your person. SMOKO is printed prominently on the side of the e-cig but there is otherwise no other branding and no buttons to fiddle with. Instead, this e-cig is draw activated with an LED indicator that lights up blue whenever you take a draw. When it’s time to recharge, the LED indicator will flash and the device will stop working pretty much straight away. I wish there was some sort of warning instead of the device just dying, and this is one of my only cons with the device. However, on the flip side, the battery life was very good for such a small vape and I ended up getting around two days of heavy usage before I had to recharge.

Getting started with this e-cigarette is super easy. When you first take it out of the case there are some stickers that have to be removed before you use the device. Once this is done, you simply take out the pre-filled pod from its plastic packaging and screw it onto the e-cigarette — that’s all there is to it! I can definitely see how the simplicity of this device and it’s ease of use could be attractive for those switching from traditional cigarettes to vaping; it really couldn’t be any simpler. I also really like how clean and discreet this device is — most people thought that I was actually smoking a cigarette!

The draw from this e-cigarette is surprisingly satisfying. I wasn’t sure if I would get the throat hit that I was looking for from such a small pod but it definitely delivered. The draw is very tight and mimics the pull you would get from a cigarette. It also gives a nice ‘kick’ with the throat hit due to the 18mg/ml nicotine ejuice. It doesn’t produce a lot of vapor, so you won’t be winning any cloud blowing contests. But this low vapor production allows you to be pretty low-key and not attract too much attention while you’re vaping. The E-Cig refills each lasted me about 2-4 days of vaping depending on how heavily I used the device. Those looking to transition from the cancer sticks to vaping will certainly find that this vape mimics the real deal. 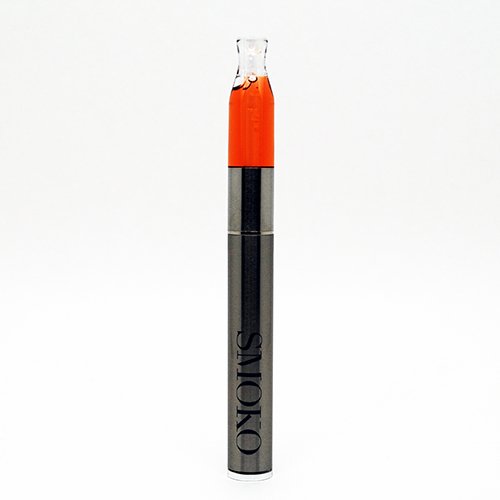 The refills for the Vape Starter kit are a lot different than the E-Cig refills. These look more like a clearomizer or ‘normal’ vape tank; not at all like a cigarette. They are clear to allow you to see how much juice is inside and the tank is made of a pretty sturdy plastic — I’ve dropped it a few times without any ill-effects or breakage. Kudos to the build-quality here.

The Vape starter kit is only marginally more weighty than the E-Cigarette so it’s still a very feathery-light device. The build-quality is on-point and everything feels very well put together. It’s still small and light enough to carry around for those who don’t want to take a big box mod with them all day, but offers more power and a longer battery life.

Similar to the E-Cigarette, the SMOKO Vape is pretty easy to get up and running. When you open up the metal case you’ll find the battery, a pre-filled tank and a micro-USB cable. Take the tank out of its plastic packaging, attach it onto the battery, and you’re good to start vaping!

The draw from this vape is really good. It’s a very tight MTL draw and gives a very nice throat hit. You get a bit more vapor than when using the e-cig kit, but it’s still pretty discreet cloud production when compared to other pod devices on the market. Each of the Vape refills lasted me about 2-4 days of vaping depending on how heavily I used the device. The benefits of the SMOKO Vape over the E-cig seem to be the longer battery life and it’s larger refills. Otherwise, the devices seem to offer more or less the same satisfying draw. The very similar sensation to smoking could very well make this the vape that helps smokers quit.

In addition to their Original Tobacco flavor that comes with the starter kits, SMOKO also offer a bunch of other flavors. While I’ve been told that their most popular flavors are their Tobacco varieties, their fruit flavors are also super tasty. Flavors are the reason why most smokers stick to vaping and SMOKO have got ones that are pretty damn good.

The refills come in packs of two for the Vape E-Cigarette and packs of five for the E-Cigarette refills. They sent me a few of their flavors to try and I’m going to go over how each one tasted and vaped: 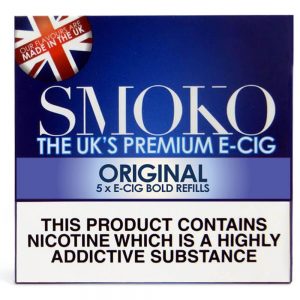 Their Original flavor is the one that comes with the starter kits. It’s a full-bodied tobacco flavor with a hint of vanilla and it tastes very authentic. It’s also very smooth and I enjoyed vaping it even as someone who isn’t a huge fan of tobacco. I think that you’ll really like flavor if you’re trying to transition from smoking to vaping. 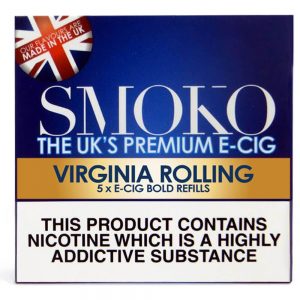 If you’re someone who rolls your own tobacco and you’re looking for an alternative that is cheaper and better, this is the flavor for you. This is definitely one of the best tobacco substitutes that I’ve tried. It’s got a more bold and robust taste than the Original tobacco flavor and will satisfy those who smoke heavier cigarettes. It has a little extra ‘oomph’ to it that really enhances the throat hit and sensation of the vapor. 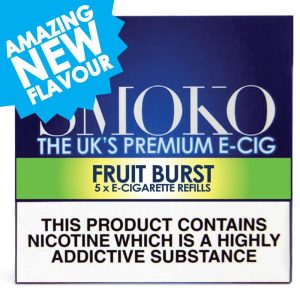 Probably my favorite flavor of the bunch, this one had me vaping on it like no tomorrow! While they don’t list which fruits this flavor is composed of, I tasted apple, cherry, peaches and maybe a melon of some sort. In any case, it’s absolutely delicious. I didn’t know what level of flavor you could really get from these sorts of cig-a-likes but Fruit Burst showed me the light. If you like fruity flavors I would definitely pick up a pack of these refills with the starter kit. 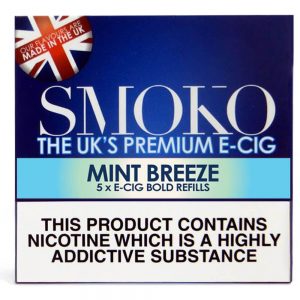 If you’re a menthol smoker you’ll probably like this flavor. It’s a very minty vape that is cool and refreshing to the taste buds; this flavor will wake you up in the morning, that’s for sure! If you like strong mints, you’ll definitely like the menthol blast from this flavor. 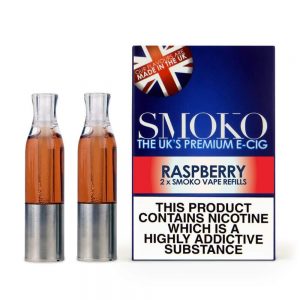 At the moment this flavor seems to be available only for the SMOKO Vape. Fresh, ripe raspberries are the flavor. It’s a bit different than most other raspberry ejuices I’ve had but this is a definitely good thing. Another great flavor for fruit lovers. 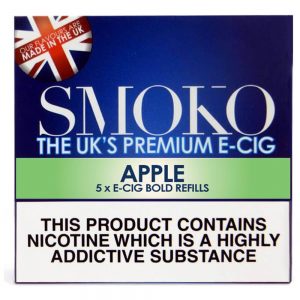 This one is as true to flavor as it gets. Literally tastes like freshly picked apples straight from the orchard. I love apples myself so this flavor is dangerously good. The aroma that the vapor gives off is also super pleasant. It’s McIntosh apples in a pod. 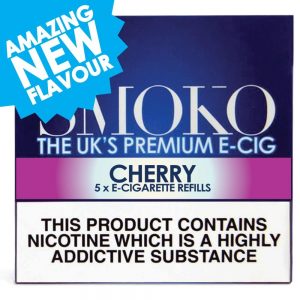 Last but not least, cherry! This is one that will appeal to the masses as it’s not too overbearingly sweet, but just sweet enough to satisfy even the most picky vaper. This one is a close second for my favorite flavor of the bunch. If you like fruits, you’ll love this one. 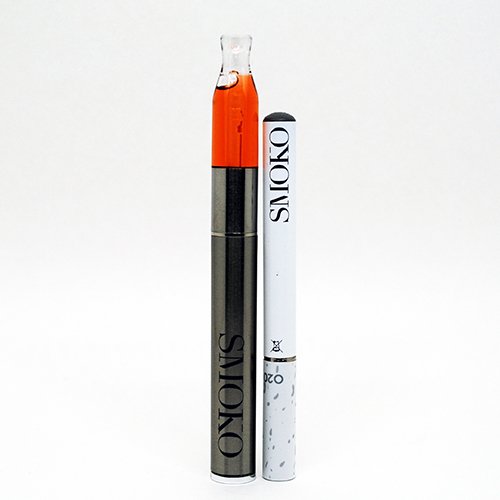 Overall, I’m very impressed with the quality of vapor and tight MTL draw that you get from SMOKO’s starter kits. While more advanced vapers might want to look for something different, those looking to switch to vaping from traditional cigarettes will certainly find this to make the switch a lot easier. The throat hit closely mimics that of a real cigarette, which is something not a lot of pod systems have been able to do. Plus, their variety of pre-filled flavors makes it easy to stick with vaping. Once you’re vaping on delicious fruits, it’s hard to go back!

If you’re interested in trying a SMOKO E-Cigarette or VAPE Starter kit, we’ve arranged an exclusive 20% off discount code for our readers. Simply click on the link below and the code will automatically be applied to your cart. Otherwise, use code “SAVE20%PJ” on SMOKO’s checkout page!

Until next time, Stay Versed!