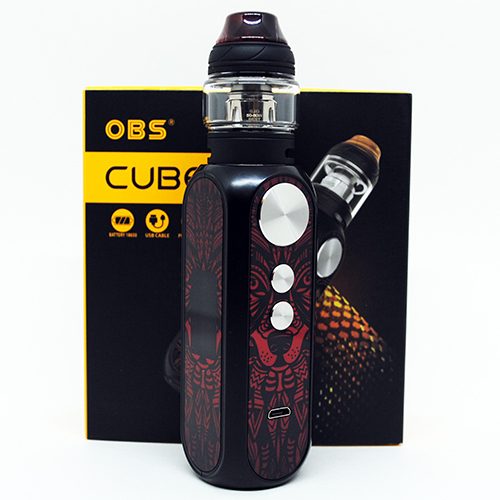 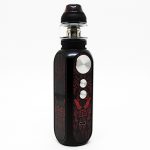 The OBS Cube X is the follow up to the OBS Cube. It’s got the same tall, cube-like shape and also fires at up to 80W, however there are a few notable differences. For one, the Cube X is a little bit taller and wider than its predecessor. Secondly, the Cube X foregoes the 3000mAh built-in battery and instead takes a single 18650 battery for power.

The Cube X kit includes the OBS Cube Tank; the same tank that came with the OBS Cube. This time though, you get the M3 triple mesh coil which is supposed to be a cloud monster and incredibly flavorful. You can get the kit in 8 different designs. Four are more neutral and reserved while the other four feature eye-catching patterns that are more outgoing. 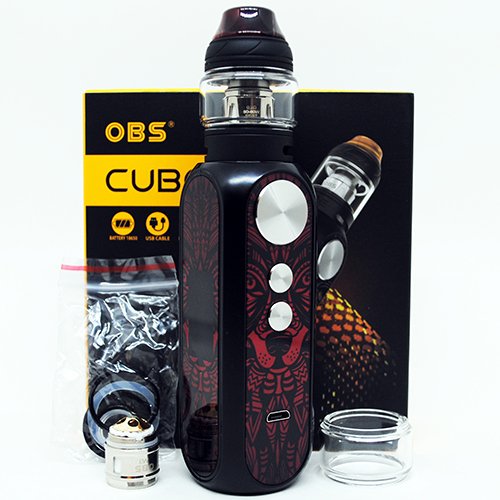 The Cube X looks identical to the Cube but it’s a little taller and wider at 88.5mm by 30.5mm. It also comes in different designs and patterns. I got the “Bloody Mary” design which is a sort of tribal wolf pattern in red and black. It’s semi-reflective and the design is on all four sides of the Cube X. It’s my favorite of the four patterns available but the Rainbow Candy pattern also looks very attractive as well. Neat.

You would think that a cube shaped mod wouldn’t be very comfortable to hold but it surprisingly is. The corners of the Cube X are rounded which makes it fit very nicely in the hand. Holding it with my thumb on the fire button just feels natural. It does have some weight to it with the battery installed but it isn’t overly heavy. It’s just heavy enough to feel solid and reassure me that it’s not going to break.

Build quality is also good. The design plates seem to be under some sort of glass or a good plastic. I thought that they would scratch super easily but they haven’t. The device is still nearly as scratch free as when I started using it and the black paint on the body has also held up well without any fading or scratching.

On one side of the Cube X are the buttons. There’s one large circular fire button and two smaller adjustment buttons. The buttons are firm and don’t activate too easily but they don’t take a lot of pressure to use. They’re a perfect balance of being easy to use but not too easy to accidentally press. They make a soft click when pressed and have nice feedback as well.

The 0.96” OLED display is on another panel of its own. It looks a little cloudy because it’s recessed underneath the glass but it’s very minor clouding. The screen is surprisingly bright and so it was easy enough to view; even in direct sunlight. The screen shows your battery charge level, wattage, coil resistance, voltage, a puff counter and your puff time.

Unlike the OBS Cube, the Cube X takes a single 18650 battery. The battery door is hinged and opens using a small switch. It’s spring loaded and works great but I did have an issue the first time I tried to open it. If you don’t have a battery installed it won’t open on its own so you have to pull down on the switch and pull the door open at the same time. If your fingernails aren’t grown out it can be a little challenging. Also, the battery sits positive side down on this mod so make sure you insert it correctly. 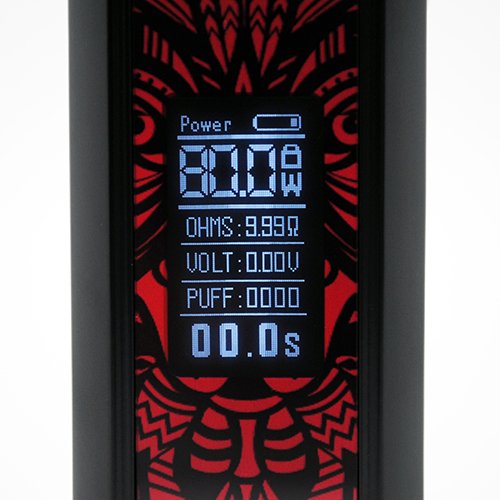 The Cube X is a simple mod. There’s no temperature control mode, bypass mode or variable voltage mode. There isn’t even a menu. There are no settings to fiddle with and no modes to change; wattage mode up to 80W is all that you get.

If you’re someone who just uses wattage mode or are new to vaping then this isn’t necessarily a bad thing. But if you use temperature control and bypass modes regularly, it’s definitely a deal breaker.

To turn the device on or off it’s your standard five clicks. Strangely though, turning the device off resets the puff counter. I’m not sure why this is but I don’t think it should be the case. Seeing as there’s no way to lock the firing of the device, you’ll have to turn it off to be safe when throwing it in your pocket. Bye bye to all your precious counted puffs!

I think that this is a great feature to prevent you from accidentally switching the wattage but it would have been better if you could also somehow lock the fire button. As it is, I turned the device off every time I pocketed it anyway.

The included Cube Tank is a 24mm diameter sub ohm tank. It looks right at home on top of the Cube X as the color and drip tip match with the pattern of the device. The drip tip is an 810 and made of resin and it narrows towards the tip. It’s comfortable on the lips and keeps your lips cool when vaping.

I like the design of this tank because it’s like the mod: simple. CUBE is engraved on the bottom airflow ring and the top cap has a few lines engraved as well. Otherwise it’s a pretty simple tank. The top cap comes off with a half twist and this is how you access the fill ports. The top cap is very secure and won’t come off without intentionally trying to remove it.

The fill holes are two large kidney shaped ports which makes it easy to fill the tank. I used both dropper bottles and pointy-tipped bottles without issue. Once you’re done filling the tank you have to press down on the fill cap and give it a quarter twist clockwise to secure it back onto the tank. As I said before, once it’s on it’s really on. I’ve had no leaking from the top cap area.

You get two glass sections with this tank. The preinstalled straight glass will hold 2ml while the bubble glass expands the capacity to 4ml. I actually got a spare bubble glass with my kit so I think I’ll consider myself lucky. I never use the straight glass that comes with tanks anyway and instead I always opt to use the bubble glass. There’s no downside; only the upside of increased capacity which in turn means less refilling.

There are two large adjustable airflow slots on the bottom of the tank. The airflow control ring is snug and will stay where you place it but it’s still easy to adjust. With the airflow all the way open the draw is extremely airy and whistles a little. With the airflow closed you get a slightly restricted draw but there’s still a lot of air. It also whistles quite loudly with the airflow restricted.

Both coils are super thirsty and use a lot of ejuice. This is the case with most mesh coils though. I had to refill at least once a day with the M1 and sometimes twice a day with the M3. This translated into 8ml+ of ejuice a day with my heavy vaping. However, the flavor was so good that I almost didn’t mind.

You can change the coil by unscrewing the top/glass section from the base of the tank and then screwing the coil in. 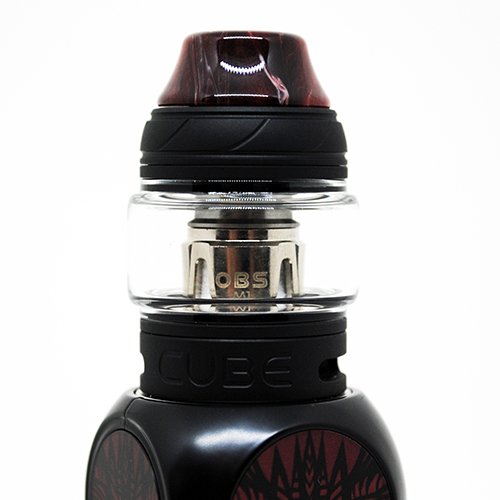 I have to say that the OBS Cube X is a great kit to vape with. The simplicity of the OBS Cube X may be too simple for some, but I think that this is really what makes it so good. It’s great to be able to just pick it up and vape without having to worry about adjusting anything but the wattage. The mod is also very reliable and fires extremely quickly. Once you hit the fire button its firing, no delay.

Battery efficiency is one downside to the Cube X. A single 18650 doesn’t get you very much vaping time, especially when using the included coils. The M1 and M3 need high wattages to work their best and this isn’t something that the Cube X can output for more than half a day with a single battery.

Using an LG HG2, my battery was far too drained by 4pm to output the 65 or 70W I had it set at and was instead firing at 45 or 35W. You definitely need to carry an extra battery with you if you’re going to be vaping heavily all day.

As for the tank and coil performance, I have many positive things to say. The 0.20ohm triple mesh coil was amazing and delivered accurate and tasty flavor. I restricted the airflow down to nearly closed and also set the mod to 70W, the top end of its recommended range. This is where I got the best performance. Using Hawaiian POG it brought out all of the flavors in the ejuice and I could taste the passionfruit, orange and guava. The flavor is very upfront with this coil.

Wicking was also great and I had no dry hits even while chain vaping. Ejuice goes super quickly though so I found myself refilling at least twice a day while using the triple mesh coil.

The 0.15ohm coil was less flavorful than the 0.20ohm coil but still great. I got delicious flavor and accurate recreation of the notes in my ejuice. I found this coil to be best at 75W which is where I got warm but pleasant vapor with the airflow closed down. For being just a single mesh coil the flavor was only slightly below the triple mesh. 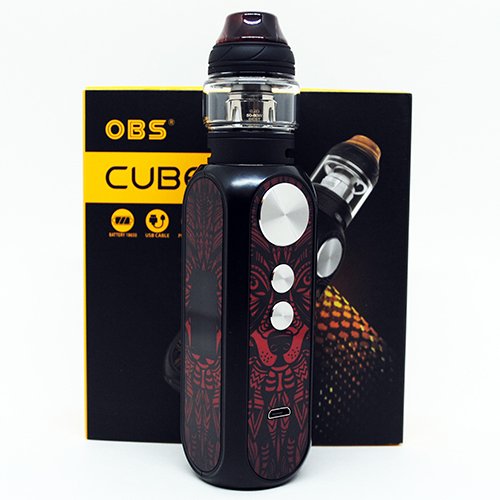 The OBS Cube X is a great mod and the Cube tank is a great tank; they’re just not the best together. The coils require so much power that they drain a single 18650 battery too quickly.

The Cube X Mod would make a great first device for someone just getting into vaping. It doesn’t have the features of some other mods but the simplicity is what I liked. It’s easy to use and there’s nothing to mess with.

The Cube Tank is also great. The coils deliver awesome flavor and it doesn’t leak. If you’re conscious of the amount of ejuice you use though (and who isn’t really), it’s a thirsty beast that will have you refilling at least once per day.

Would I recommend this kit? If you vape heavily, no. But I would recommend the OBS Cube X mod and the OBS Cube Tank separately to be used with a different mod/tank. A single 18650 drains much too quickly to support the coils for more than half a day unless you’re not vaping very heavily.

What do you think about the Cube X Kit? Leave a comment!