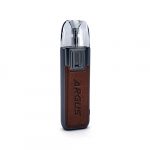 The Argus Pod is another good device by Voopoo. Considering how small it is, it really packs quite a bit of power. I found the flavor to be good with both coils, but personally I preferred the draw of the 0.7Ω coil.

This is an easy to use device that is perfect for someone who is new to vaping, or just anyone looking for a simple design and UI. If you can see past the small power button and the wiggle of the pod, then I can easily recommend grabbing one for yourself.

The Voopoo Argus Pod is the latest pod vape in the Argus series. VooPoo is widely known for manufacturing some of the best devices on the market. If you are looking for anything from pod vapes to mods, Voopoo has a great reputation for meeting industry expectations. Many Voopoo pods and mods are listed on our buyer’s guides such as the Drag S Pro and the Vinci Q.

Unlike the Argus Air, Voopoo has opted not to tint the pods on the Argus Pod and I am loving that. There is nothing more frustrating than not being able to see your e-juice level, so thank you Voopoo! It’s also quite a bit smaller than the Argus Air, which is a good and bad thing. I love the portability but the size being smaller meant the screen and button had to be smaller; the power button is really, really small.

As small as the device is, it packs an 800mAh battery and can fire at up to 20 watts. The Argus Pod features an upgraded airflow system; a 3 position slider which gives you more options and allows you to set the airflow to fit your wants and needs.

Is the Argus Pod worth picking up? 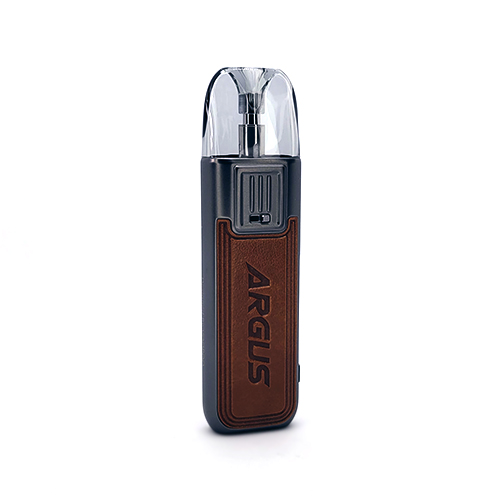 The Voopoo Argus Pod is a really small device. I would say that it’s even smaller than some of the disposables I have used lately. It is 93.2mm tall, 26.1 mm wide and 13.8mm deep. It’s quite tall and slender which I like. It feels really nice to hold and even though it is light, it does not feel cheap. It would easily fit in the pocket of your jeans.

The rest of the device is made of a zinc alloy material which comes in a gunmetal color. On the “Argus” side, above the leather, is where you can find your air flow slider and on the back side it has the Gene chip logo. It says ‘Designed by Voopoo’ on the left edge of the device and the screen is located on the right edge.

At the bottom of the device is where the charging port is. There is also a rubber grip wrapping around the port, which supports the device when standing. It is not the easiest device to stand as it easily falls over, especially because of the rubber grip.

The display is really small at just 0.69” on the Voopoo Argus Pod but you are able to see everything you need. The display is quite an improvement, however, from the Argus Air which was just 0.54 inches. The white font on the black screen is very bright and easy to read.

My biggest issue with the device has got to be the size of the button. I have fairly small hands and I still found it difficult to use. Someone with much larger hands would find it impossible to use, so that’s something to think about.

The Argus Pod is sold in 5 different designs – Carbon Fiber, Black, Gray, Brown, Red — with all but the Carbon Fiber featuring grips made of a leather-like material. 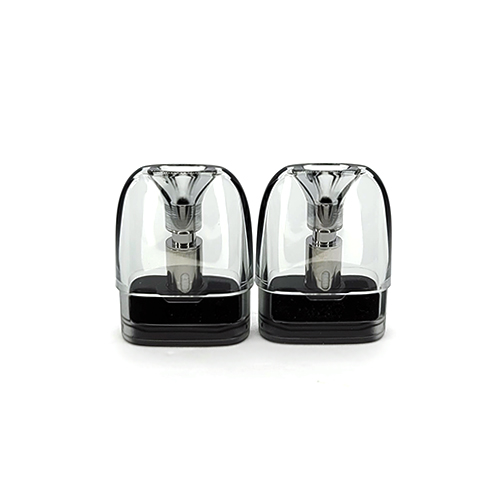 The Argus Pod device comes with 2 pods from the Argus Pod line. Unlike the Argus Air, it does not come with pods that use replaceable coils; the coils are built into the pod. You get a 0.7Ω pod and a 1.2Ω pod. Both pods are made for MTL vapers.

The mouthpiece is nice and feels comfortable to use. The opening is a good size and I found it quite pleasant to draw on.

As I mentioned before, the pods are clear and make it really easy to see your ejuice level. To fill the pod, remove the black rubber seal on the side near the bottom of the pod, and fill. As I was filling my ejuice the first time, I noticed that the pod features the resistance of the coil on the rubber sealant. I really liked that as opposed to the resistance being written on the coil itself, as it can sometimes be difficult to see this on other pod vapes.

The pod attaches and secures to the device by way of magnets. You just pop it in to install it and pull on the pod to remove it from the device. I did notice quite a bit of wiggle to the pod when it is installed in the device. It’s kind of irritating and very noticeable. I’m not sure if the pod is just a little too small or if the magnet is not strong enough to keep it in place. However, it did wiggle with both pods so it wasn’t just a manufacturing defect. 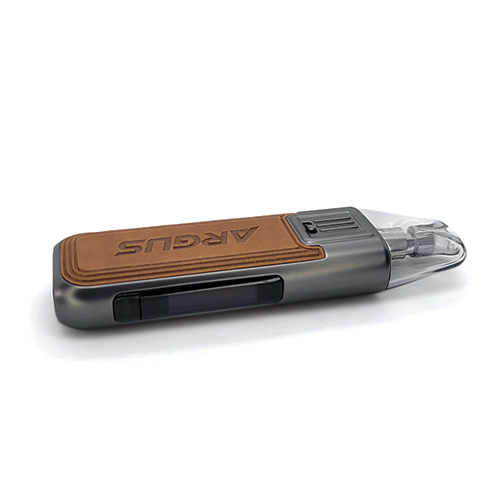 The airflow adjustment on the Argus Pod is a slider, which essentially has three settings. You can find the slider on the front of the device. There are three raised lines just above the slider so I am not entirely sure if Voopoo did that to represent the three settings or if it’s just part of the design. Based on the size of the slider, it only really has enough room for three different settings.

I did notice a change when adjusting the airflow, especially with the 0.7Ω pod. With the airflow completely open it is the perfect loose MTL draw. Half open it’s a little tighter and a little warmer. On the third setting, pretty much closed, it’s a much tighter draw and gets a little warmer than I usually like.

The 1.2Ω pod offers a tighter MTL draw than the 0.7Ω pod. Even in the most open setting I don’t find it to be loose enough for me. The draw is quite warm. Half open, the draw is quite tight, and completely closed off the draw is really tight and very warm.

The Argus series of pods includes a four hole air inlet. This is basically one hole on each corner on the bottom of the pod. Voopoo claims that this helps create a smoother flavor. I am not too sure how effective these holes are when the external airflow hole is fairly small to begin with. This would probably be more suitable in a vape with a wider airflow opening.

How to Use The Argus Pod 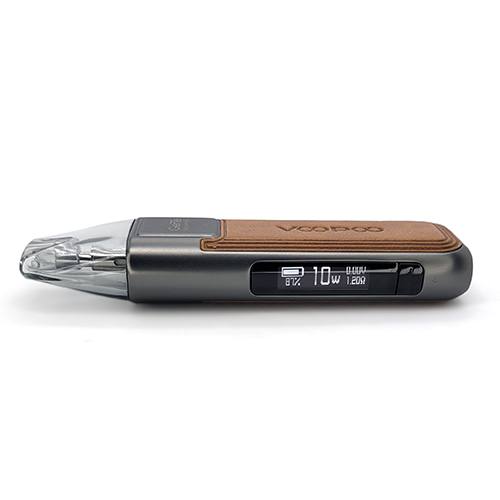 As I mentioned before, the Argus Pod will automatically set the wattage for you. If you would like to increase or decrease the wattage from what it is automatically set to, you press and hold the power button until the wattage number starts flashing. Then you can scroll through until you reach your desired wattage. Then give it a couple seconds and it will set to that wattage.

When the device is powered on you can press the button five times to enter the menu. There you will find the lock/unlock option, the puff reset and the power off. To activate any of these press the button one time. Then you can click once to move across the screen then press and hold to set.

Lock/Unlock the Device: Press the power button five times, the menu will appear. Then press and hold down on the lock or unlock option. 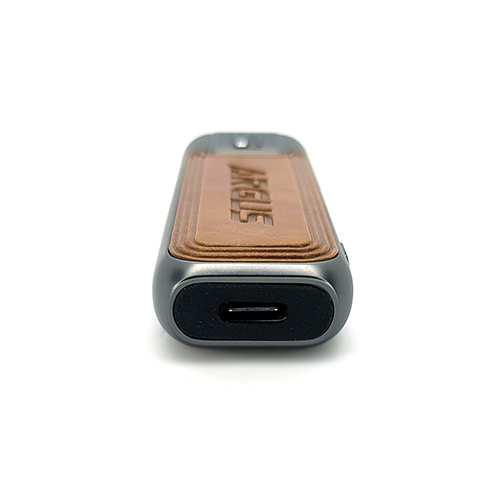 The Argus Pod comes loaded with an 800mAh internal battery. This might seem a little on the smaller side, but I was able to get almost two days out of a full charge. The battery may not be the largest on the market but because the device uses such low wattage it lasts a good amount of time.

The Voopoo Argus uses USB-C charging. To charge the device just plug the USB-C charger into the bottom of the device, then into your power source. It takes 50 minutes to charge from dead. I charged it about 5 times while using it for this review and each time was right around 50 minutes. I like that it was consistent with charge times.

The one thing that I did not love about this device was that it does not support pass-thru charging so you cannot use it while it’s plugged in. Every time the device died I had to grab something else to use for almost an hour until it was fully charged again. My advice to you would be to charge it before it dies! 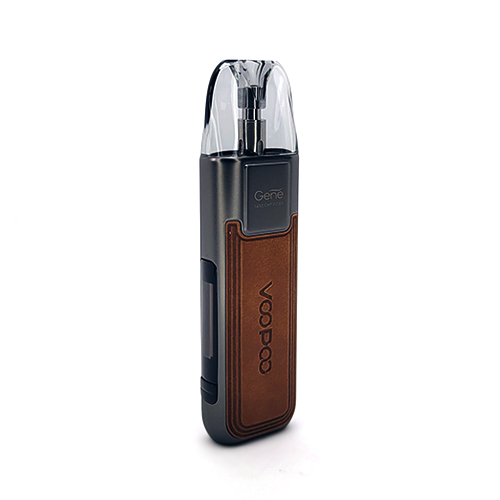 The Voopoo Argus Pod is a good MTL pod that uses draw activation. I never had any malfunctions or issues with this. It worked every time I went to use it.

When testing the 1.2Ω pod, I used Juice Heads Salts’ Watermelon Lime (50/50) and the Argus was really good at delivering its true flavor. It was just the right amount of warmth, and with the airflow fully opened, it delivered a great draw and nice throat hit. I kept the wattage at the suggested setting for the most part but did play around with it a little. To me, the 10W setting was perfect.

I wasn’t completely impressed by the flavor of the 0.7Ω coil at first. However, I changed my mind as I used it more. I think it just needed a little more time for the flavor to pop. It is a much tighter draw and without the airflow completely open I would not have been able to use it. I felt it delivered the perfect amount of warmth at 18W. I tested this coil with Naked’s Hawaiian POG (65/35) nic salt and the flavor and throat hit were good.

I started using both pods just over a week ago. Even while using sugary ejuice it hasn’t seemed to affect the coil at all. They are both tasting great and have held up during this review.

The device has a patented 3 layer leak proof design. One layer of protection is on the base of the coil. It also has an air-tight silicone seal at the base of the pod and some form of leak proofing in the bottom cap. I did not find any leakage with the device, especially in the fill area where I find most of my issues with leaking happen.

Inserting and removing the pod was never an issue for me. However, I did notice that both pods wiggled while inserted. They would kind of rock back and forth. Every time I went to take a draw it would move and it started to really bother me.

The Argus Pod is another good device by Voopoo. Considering how small it is, it really packs quite a bit of power. I found the flavor to be good with both coils, but personally I preferred the draw of the 0.7Ω coil.

This is an easy to use device that is perfect for someone who is new to vaping, or just anyone looking for a simple design and UI. If you can see past the small power button and the wiggle of the pod, then I can easily recommend grabbing one for yourself.