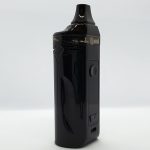 There’s sound reasoning behind this 200W pod mod though. You can purchase a 510 adapter (sold separately) that transforms the Nugget GT into a regular dual battery box mod. With this 510 adapter the Nugget GT can be used with any 510 threaded tank.

In addition to the 510 adapter, you can also purchase an RBA coil for the Nugget GT (sold separately). The RBA coil has adjustable airflow to allow for MTL vaping whereas the stock coils do not.

I’ve got my hands on both the 510 adapter and the RBA coil for this review and, along with the Nugget GT, I’m going to put them to the test. Is this dual battery pod mod worth a buy?

This device was sent to me from Heaven Gifts for this review. 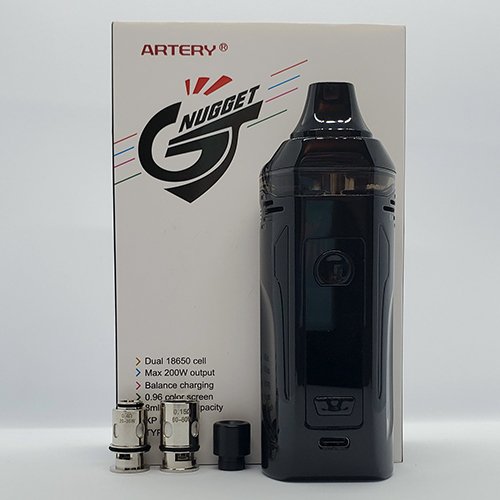 The Artery Nugget GT is called a pod mod but it’s seriously more mod than it is pod. One reason I say this is because of the size; it’s an absolute tank of a device! It’s 102mm tall, 43mm wide and 31mm thick which is more in line with the size of a vape mod than a pod vape. With the batteries installed, it’s also quite heavy. The bulkiness of the Nugget GT means that this isn’t a device you can easily slip in your pocket. Even if you do manage to pocket it, you’re going to notice the size and weight.

The frame is made out of plastic while the battery door is made of metal. In my opinion, the Nugget GT doesn’t have the nicest design but I do like the shape of the mod. It’s got a flat front where the screen is, and rounded curving sides that meet at the battery cover on the back. Each side of the device has an indentation for your fingers to rest when you thumb-fire. There are also two inlays that are purely aesthetic which keep the Nugget GT from looking plain. Overall, not my favorite looking mod but for how bulky it is, it doesn’t look too bad.

The screen is a 0.96” full color display. It’s bright enough indoors but outdoors I have trouble viewing it. The screen is high quality and organized. It’s definitely a modern screen as there’s no pixelation and the numbers and letters are all very crisp.

The fire button is slightly raised and indented for easy activation. It takes very little pressure to activate and would likely accidentally fire if you put it into your pocket. Although, because of the size I haven’t actually been able to fit it into my pocket, it’s still worth noting. The adjustment buttons are noticeably more stiff. All in all, I like the buttons but the fire button would be better if it was a tad harder to activate.

The battery cover is magnetic and will fit either right side up or upside down. There’s no wiggle at all when the battery cover is attached. The battery bay is neat and snugly fits a pair of 18650 batteries. There’s a ribbon to make removing the batteries easy. Good battery compartment but marking the positive and negative symbols in white would have been nice to see.

The 510 adapter for the Nugget GT transforms it into a regular, dual battery box mod. This adapter is sold separately but it really should have been included in the box. After all, this is a 200W pod mod and the coils that come included are only good up to 100W max. Including the 510 adapter would at least let you use it for your tanks right out of the box. If I was looking at purchasing the Nugget GT, having to purchase the 510 adapter separately would make me rethink the purchase.

The 510 adapter is simple. The top has a 510 plate and the bottom has a compatible connection for the Nugget GT. Just push the adapter onto the top of the Nugget GT and it clips into place. I found the clip to be a bit flimsy and it would sometimes pop out even without pressing the release button. This mostly happened when removing the top caps off of RDAs. Still, the 510 adapter is perfectly usable but the clip could be made more secure.

With the adapter, you can use any tank that has a 510 pin and the Nugget GT will work just like any other dual battery vape mod. It only has power mode though so if you’re a temperature control vaper you’re out of luck. 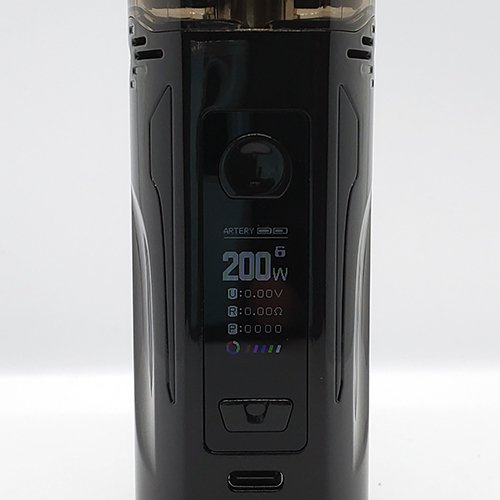 The Nugget GT can fire at up to 200W but to do so you have to unlock the wattage. By default, the Nugget GT restricts the maximum wattage that you can set based on your coil resistance. This is in order to prevent burning your coil. Pressing the fire button three times brings up the “Power Limit” screen where you can select “Lock” or “Unlock”. Unlocking the power limit is especially useful when using the 510 adapter with your own tanks or when using the RBA with a low ohm build.

The screen on the Nugget GT displays the wattage, voltage, coil resistance, a puff counter, and two battery icons for the battery level. Holding the power button and both adjustment buttons resets the puff counter.

The Nugget GT pod is quite oddly shaped. It’s very wide and short. It’s easy to see how much ejuice is left in the pod but only if you look at the pod from the front. The pod attaches to the battery using a clip and unlike the 510 adapter, this clip is very secure. The pod stays firmly in place and there’s no wiggle whatsoever when it’s installed.

The pod will hold 8ml of ejuice which is a massive amount. The pod is refilled through a fill port on the bottom of the pod. It’s easy to remove the plug thanks to a little tab that hangs off but the plug is also still secure.

There’s no adjustable airflow on the Nugget GT and both coils provide a DTL draw. They’re best used with regular nicotine ejuices and not recommended for use with nicotine salts.

The RBA coil for the Nugget GT is sold separately. The package comes with the RBA coil, a 510 connector to test the coil before you install it, two premade kanthal coils, a screwdriver, spare screws and spare o-rings.

The RBA has a small two-post build deck secured by top-mounted screws. The included pre-made coil fits perfectly on this deck. Your coil legs have to be facing opposite directions in order to fit on this build deck (like they’re doing the splits). Coils with an ID of 2mm will fit just right and anything larger is going to be too big for the small build deck.

The screws for the deck are good quality and loosen or tighten without an issue. Installing the coil is a breeze. Centering the coil as much as possible over the hole in the middle of the build deck is optimal because that’s where airflow comes into the coil.

With the coil centered and secured, wicking is similarly easy. I cut my wicks so that the cotton is resting on the piece just above the o-ring. With the cotton trimmed, replace the RBA cover by screwing it back on.

Unlike the stock coils that come with the Nugget GT, the RBA coil has adjustable airflow. In my opinion, this is one of the main selling points of the RBA because it allows you to adjust the airflow down to a nice MTL draw or leave it open for a restricted DTL. Airflow is really nice on this coil but I’ll get into this more in the next section. 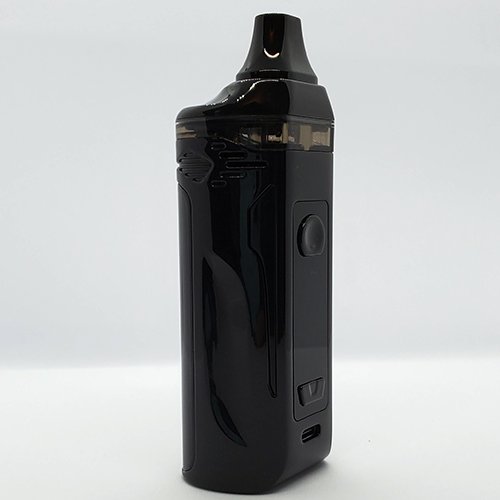 The Nugget GT is an extremely versatile mod. It can be used as a pod mod for DTL with the stock coils, for MTL with the RBA coil, and as a regular mod with the 510 adapter. While you might think that this “jack of all trades” approach would hinder the performance, it actually does surprisingly well regardless of how you use it.

Both of the stock coils handled 80VG ejuice like champs. I didn’t hold back from chain vaping these coils and they didn’t falter at all. I’m impressed by these coils.

As impressive as the stock coils are, the RBA base is the star of the show. The included kanthal coil came out to 0.65ohm and I filled the tank with the same 80VG ejuice (G.I Jane by Fuggin Vapor). With the wattage set to 25W and the airflow nearly closed, the vapor is warm and the draw is a restricted mouth to lung. Flavor is very good. The RBA is the way to go if you want a tighter draw. The stock coils will only give you an open, airy vape.

Last but not least, I used the Nugget GT just like any other mod with the use of the 510 adapter. My Dead Rabbit V2 RDA performed just like it would on any vape mod and worked just as good as ever. As I mentioned earlier, the 510 adapter does have a tendency to pop off the mod if you’re not gentle and that’s frustrating. But most of the time it stays put and works like it should.

Did we need a dual battery pod mod? Probably not. But after using the Nugget GT, I’m glad that it exists. Direct to lung vapers will enjoy the kit as is. The stock coils perform great for regular nicotine ejuices, especially the 0.15ohm coil. MTL vapers will want to pick up the RBA coil or, better yet, go for a dedicated MTL pod system instead. There are better options available than the RBA coil for a MTL pod vape.

When it comes to versatility though, there aren’t many devices that give you the options that this does. You can take it easy with the pod and stock coils or build your own coil with the RBA. Or if you want to use a tank, attach the 510 adapter and you’re set. The accessories are neat, but including them in the box would have made the Nugget GT a much more attractive purchase. Overall, the Nugget GT is a solid pod mod and if you pick up the accessories, you’ll definitely get good use out of it.