Augvape Druga 2 RDA Review: The Successor to a Classic 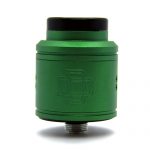 The Druga 2 RDA is the new version of the original Druga, which was released back in 2017. It’s a collaboration between Augvape and Mike Vapeshouse, an Indonesian coil builder. It has received upgrades to the clamp posts and also has different airflow slots than the original Druga. 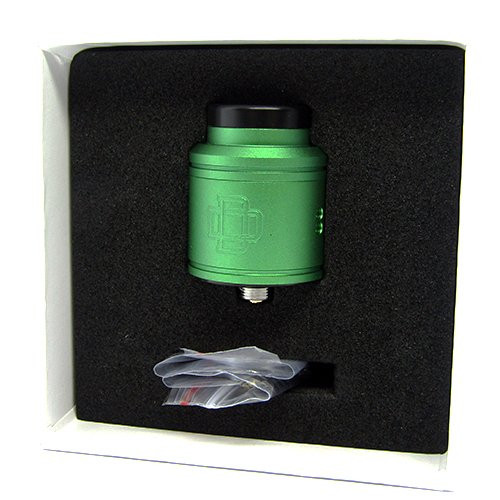 The Druga 2 is a 24mm diameter RDA, and can also be used for squonking by swapping the 510 pin out for the included squonk pin. Both the standard 510 pin and the squonk pin are gold plated.

I received the green version for review and it is also available in matt gunmetal, stainless steel, aluminum red and matt black on their website. There’s no mention of the green I received, so looking on some online retail stores I also found blue, purple and the green. The finish on the green is matt and the other colors all look to be matt as well, from what I could find online.

I couldn’t find any mention of what material the Druga 2 is made from, but it’s light as a feather and going from the ‘Aluminium Red’ color on the website I guess that’s what it’s made from.

The top cap / airflow control is removed from the barrel by simply pulling it upwards; it’s secured in place with an o-ring. The tolerance of the o-ring is nice, with the top cap not being too loose or too tight.

The barrel section has the Druga logo engraved on one side, but it’s not in a different color to the rest of the barrel, so it’s nice and subtle.

On either side of the barrel are the airflow slots, which are made up of two rows of three holes on each side.

The base has a serial number, the Druga 2 name, ‘By Vapeshouse and Augvape’ and the usual regulatory marks, along with a screw which holds the negative post to the deck and the protruding 510 connection pin.

I’ll look at the build deck in detail later.

Overall, the design of the Druga 2 is very nice in my opinion. It’s subtle, with the logo being engraved but the same color as the rest of the RDA. The airflow holes look neat and deliberate instead of being a cluster of twenty odd tiny holes. 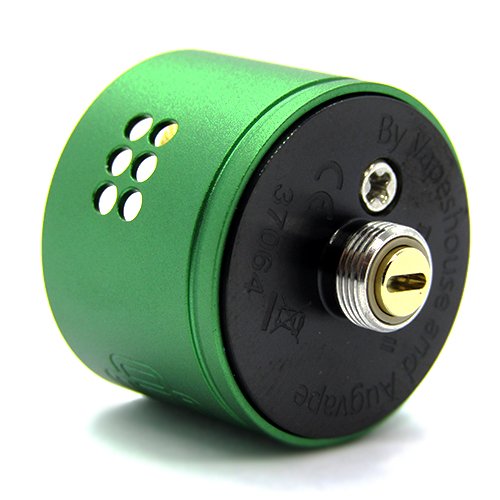 However, if you twist the cap in the opposite direction you can also choose to close off the airflow in columns instead, so you can close off one hole on both the top and bottom row, then two holes etc.

The top cap also has hard stops in either direction.

So, the airflow options available to you are quite numerous, despite there only being a total of six holes on each side.

The airflow itself is a side airflow, coming into the chamber horizontally and hitting the installed coils on the sides. This obviously gives you options to play with the height of your coils in relation to the airflow hitting them, to find what works for you.

Finally, the inside of the top cap, which when fitted to the barrel completes the chamber of the RDA, has a domed concave shape. This should in theory direct the vapour towards your mouth when drawing, increasing flavor.

Overall, the airflow options are quite plentiful on the Druga 2, despite possibly looking quite limited at first glance of the six airflow holes on each side.

The build deck of the Druga 2 certainly looks unique. I didn’t try the original Druga myself, so I was looking forward to giving it a go.

The deck itself is all black and is dominated by the two extremely large posts in the center, which are gold plated.

With standard dual posts you would unscrew the grub screws, pop your coil leads into place and then tighten the grub screws to clamp down on the coil leads. However, the Druga 2, as with the original Druga, features what Augvape calls a ‘Clamp Snag System’ or CSS for short.

Instead of the grub screws, you have two clamps on top on the posts which you can tighten / loosen with your fingers. When loosening, this raises the clamps up, allowing you to place your coil leads beneath them, then tighten them back down to clamp the coil leads into place.

The size of the post holes beneath the clamps is enormous, so you can install some really exotic coils into them, providing they’ll fit on the build deck.

One thing to note is that each post only has one hole, so if you are installing two coils the leads on each are going to be sharing a post hole.

Building on the Druga 2 RDA

To install a build on the Druga 2 you will unscrew each clamp to open up the post holes, insert your coil leads, then tighten the clamps back down. It’s also worth deciding whether you will be dripping or squonking, as you can swap out the 510 pin for the squonk pin if needed.

After positioning your coils, it is worth using a screwdriver to give each clamp a final tighten to ensure your coil leads are secure.

Then you will dry fire your coils and remove any hot spots by strumming and / or pinching your coils. Ceramic tweezers will allow you to pinch and strum while firing your coils.

Once happy, you can wick your coils with your choice of cotton, trim any excess and fluff the cotton if you want to. The cotton only needs to rest on the base of the deck, you don’t want it folding under the coils as this will restrict airflow underneath the coils.

You can then wet your cotton with liquid and you’re ready to vape. 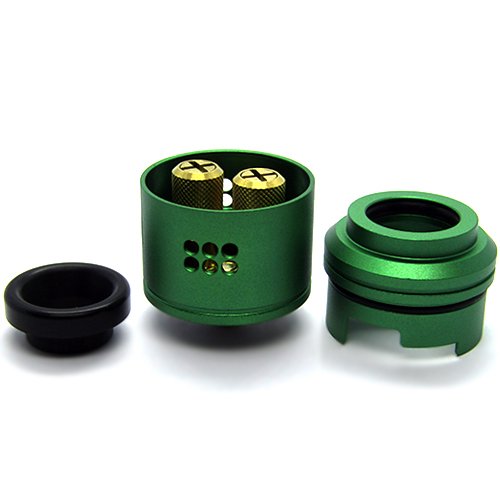 I tried a couple of builds in the Druga 2; a dual Clapton build and a dual fused Clapton build. The Druga 2 gives off some great flavour and throws some massive clouds.

The airflow options are surprisingly versatile, given that you only have six holes on each side. You have a number of configurations available to let you find what works for you and I found that the adjustments make a noticeable difference between each one.

Fully open gives a very airy vape, while restricting the airflow down allows you to dial in to a tight direct lung draw if that’s your preference. The airflow is smooth with no turbulence on any of the airflow configurations.

I did run into an issue when using the Druga 2 as a dripper. I like to drip directly into the drip tip, instead of taking the cap off and putting juice directly onto the wicks or coils.

What I found was due to the size of the Clamp Snag System, the enormous posts in the centre of the deck, any juice that I dripped landed onto the top of the clamps first, then would work its way down in every direction. This meant liquid would be coming down the inside of the chamber and could pool up in the air holes. It never caused a major leak, but would block some of the air holes and I’d have to suck to clear them, with a little liquid making its way onto the outside of the RDA.

In this regard it meant it didn’t work as a dripper for me. I need the liquid to drip either directly onto the coils, wick, or just hit the deck and be soaked up by the wick.

Squonking on the other hand is great. The juice well is 6mm deep so you would have to go crazy to over-squonk and cause a leak. Sitting on something like the Topside, the Druga 2 is a very nice little squonking RDA.

Firstly, what did I think of the Clamp Snag System? I like the fact that you can tighten and loosen the clamps with your fingers, however I’m not a fan of using the same post holes for coil legs when installing a dual coil build. I find it cumbersome and fiddly trying to hold both coils in place while tightening down the clamps.

This is not a flaw of the Clamp Snag System, the clamps work fine, it’s just that one post hole per post causes the issue for me. I’m sure with practice I’d get the hang of it more, but the convenience of the clamps gets lost due to the fiddly-ness of trying to hold each coil in place whilst tightening the clamps, in my opinion.

You may not mind building on shared post holes, so it’s more a subjective thing.

Also, the problem I had with dripping is something you may not have a problem with, depending on how you like to drip. If you remove the top cap or barrel of an RDA to drip on your coils and wick, then you won’t run into the problem I did.

It may sound like I’m saying I didn’t like the Druga 2, but I actually really enjoyed it. OK, building was fiddly, but not difficult, and the huge posts meant I couldn’t drip how I usually do, but the flavor and cloud production was great, there’s lots of airflow adjustment options, the build quality is really good, I like the looks of it, it’s lightweight and the huge juice well means over-squonking is very difficult.

Overall, the Druga 2 delivers great flavor and if it would suit your style of dripping, or you’re a squonker then it’s a great little RDA.