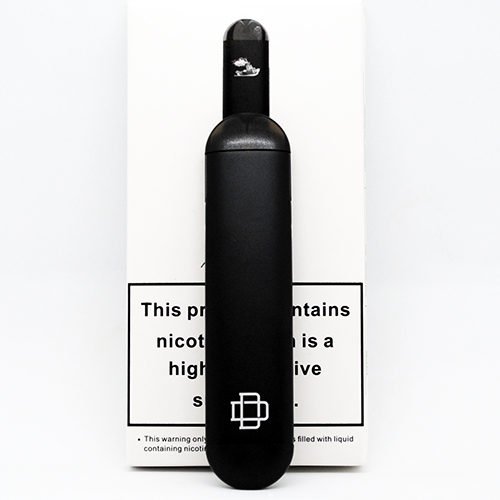 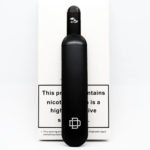 It all started with the JUUL. Since then, pod-style vapes have become extremely popular for their simplicity, portability and user-friendliness. You name a vape brand and they’ve probably produced a pod vape. But not Augvape. Not until now, that is.

The Augvape Lyfe has just been released and it’s super thin, extremely light, and uses 2.0ohm replaceable pods that are perfect for nicotine salts. And while there are already a plethora of pod vapes that you can buy, the Lyfe’s performance and flavor really stand out.

In this Augvape Lyfe review I’ll be going over everything you need to know about this new pod vape. Let’s start with what you get in the box.

The device used for this review was sent to me free of charge, directly from Augvape. 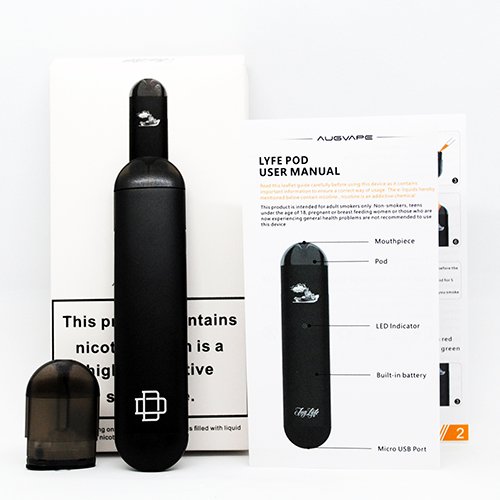 The device comes in small and very light white box. It’s a plain & simple design with the Lyfe device pictured on the front. Inside you get: 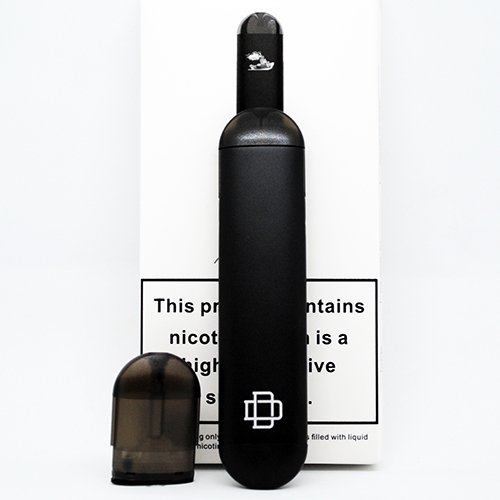 The Lyfe is Augvape’s first pod device and is a collaboration with Flawless. You won’t be blowing massive clouds but it’s a super compact and portable device, and provides a very tight mouth to lung draw. This tight draw closely mimics a cigarette, which could be helpful for smokers who still haven’t found the right device to help them quit. Plus, the 2.0ohm pods hold up to 2ml of eliquid. This, combined with its low output wattage of up to 7.6 Watts, means your ejuice will last longer and makes the Lyfe the perfect device for vaping nicotine salts.

It’s super simple to use, too. There are no buttons to ruin the clean aesthetics of the Lyfe. Instead, it’s draw activated with a green indicator light to let you know that it’s working. For a pod vape the flavor is excellent and I give the device a generally positive review. However, the Lyfe has a rather small 300mAh built-in battery and I often found myself having to recharge in the middle of the day. The device charges fast, but I would have preferred the Lyfe to include a bigger battery rather than the super thin body. Still, the Lyfe is a stand-out pod device 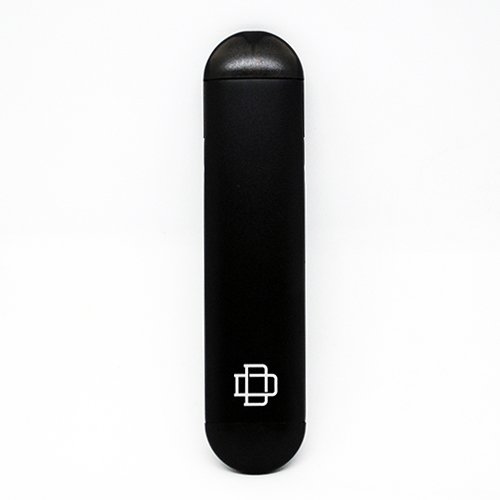 Even for a pod device the Lyfe is very, very lightweight. It’s like a feather in your hand; I’ve forgotten that it was on my lap more than a few times, too. This, combined with it’s super small and thin size makes it a convenient device for hiking, biking, or going to the gym.

You can get the Lyfe in three colors: red, black or silver. The matte black color that I received for this review is super sleek and enhances its rounded and symmetrical shape. It looks really nice. It also feels really good in your hand and can be used all day with total comfort. But this symmetry also caused me a bit of frustration; because the two ends look and feel so much alike, I found myself pulling on the wrong end of the device a lot. 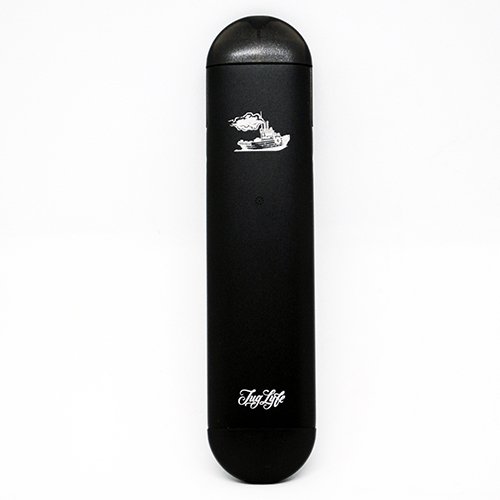 On the front of the device, at the top, is a tugboat icon with a large cloud coming out of its funnel. At the bottom reads “Tug Lyfe”. The back of the device has the Druga logo at the bottom. I’m not really sure why because this isn’t in the “Druga” line, but I do like the logo.

There’s an indicator light on the front of the device that lights up when you’re taking a draw, or when you’ve inserted a pod. The light will be green when the device is charged, and goes red when it’s time to recharge. There’s no warning, and this is one thing I disliked. To be fair, you can feel the draw getting weaker as you use the device but I would have preferred an orange to let me know it’s getting closer to dying. 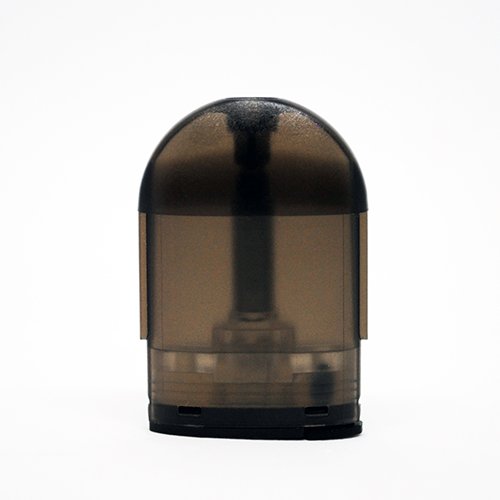 You get two refillable pods with the Augvape Lyfe. The pods are smooth and rounded, and look just as sleek as the device itself. The pods will hold up to 2ml of eliquid which is pretty good for its thin size. And when you take into account the 2.0ohm coil and ultra low wattage output, this juice is going to vape a long way. That’s what I personally love about pod systems: you can get good flavor and satisfaction using way less ejuice, especially if you’re using nicotine salts. The ultra low resistance and wattage also means that your draw will be less harsh.

The pods are lightly tinted and this matches with the bottom of the device. It’s not too darkly tinted that it’s impossible to see your ejuice level, you just have to hold it up to a bit of light. 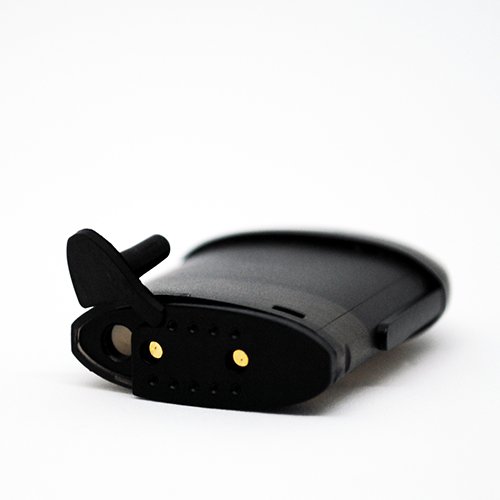 On the bottom of the pod is a silicone plug. This plug goes deep into the pod to prevent leaking and I found that it actually does a really good job. To fill the device, you just have to remove the plug and insert your bottle nozzle. I had a difficult time using droppers, as they wouldn’t fit into the really tiny fill hole, but ejuice bottles with a nozzle were fine.

In my whole time testing, I didn’t have any problem with leaking. It seems that the silicone plug really keeps the pod sealed, which is of course, a really good thing. The last thing you want is juice leaking out and onto your shirt pocket. 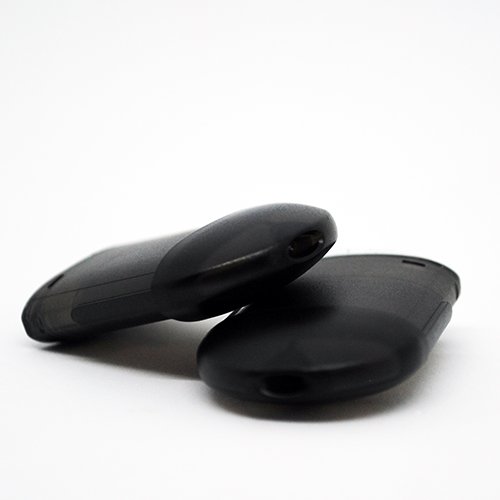 Inserting the pod is smooth and fits in nice and snug. It’s also relatively easy to remove the pod from the device but so easy that it’s going to come off in your pocket. At the bottom of the pod are two gold plated contacts. These pods are about as nice as pods can be.

In my testing, one pod has lasted me about a week and a half of heavy-usage — and it’s still going strong. I haven’t noticed the flavor dulling and it isn’t leaking either, so I think this baby will probably go strong for another week at minimum.

Just be sure to keep an eye on your ejuice level because one dry hit is the end of the pod. Although ejuice goes pretty slowly, I’d make sure to remove the pod and check every once in a while. 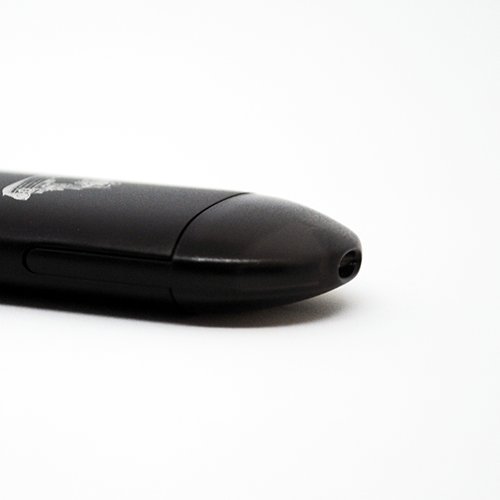 On either side of the Lyfe are two small airflow holes. These are non-adjustable and give the Lyfe a very tight, cigarette-like draw. The tight draw enhances the flavor quite a bit more than other, more airy pod devices. I really liked this MTL draw and I think that others who like a more tight draw will definitely like it as well. 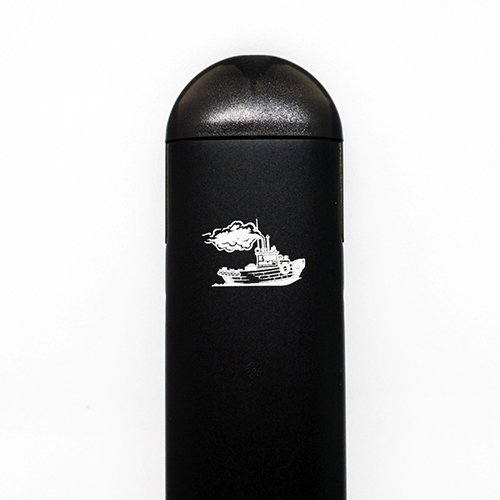 The Lyfe is powered by a built-in 300mAh battery. This isn’t very large, but it’s what keeps the Lyfe so small and thin. Plus, the fact that the device is so ultra low-powered and uses 2.0ohm resistance coils means that actual battery life is not too bad.

You get a maximum 7.6W output when the device is fully charged and the indicator light will be green when you take a draw. As the battery dies, the output wattage will also decrease. When the device needs to be recharged the light will go from green to red and will stop working.

I don’t like that there’s no warning for when your battery is going to die, especially with the smaller battery. An orange medium-battery light would have been perfect to let you know. Another thing that I don’t like: there’s no pass through charging. This is a feature that’s been included on almost every device that I’ve ever used or reviewed and seems like an oversight to not include it. This means that if your battery dies (which it will without much warning), you’re going to be stuck waiting for it to charge. Not cool.

On the plus side, the device does charge very quickly. With as little as a 15 minute charge you can get more than enough usable battery life for some good puffs. All thing considered: it is a pod vape. You can’t really expect anything too crazy in terms of battery life. 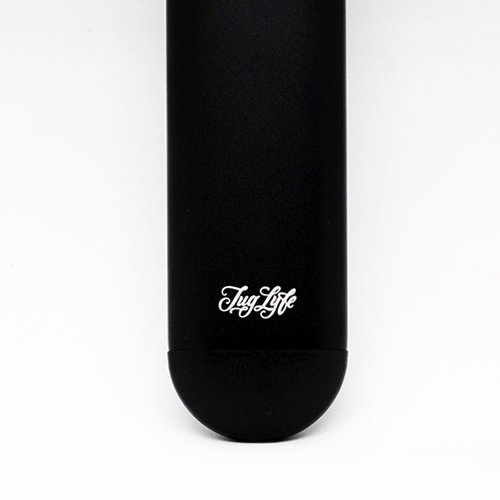 The flavor and vapor quality of the Lyfe pod device is impressive, especially for its size. In my testing, I loaded up some Hawaiian Pog by Naked100 and let it sit for 10 minutes to fully absorb. I would highly recommend doing this as well, because there’s no way to prime the coil.

The tight MTL draw very closely mimics a cigarette and I think it might be helpful for those looking to switch. It’s very restricted and forces you to MTL; you can’t DTL with the Lyfe. I personally enjoyed this style of draw but if you like DTL you’ll probably disagree. It’s not an airy draw at all.

Being a direct output device and having a 2.0ohm coil, the vapor was very pleasant. It was rather cool but still dense with good flavor as well. The draw seemed to decrease in power by a little as I used the Lyfe, but it was still a rather consistent draw all the way until it died. If you pay careful attention you can notice that it’s dying, but sometimes you’ll just end up with a red light out of nowhere.

The device tended to last me about a half day of heavy vaping. Understandable for the size of the device, but the battery should have been larger in my opinion. This meant that I was charging the Lyfe mid way through the day. However, the device does charge blazing fast and this is the silver lining to the small battery. Using a MICRO-USB cable, the device will fully charge in around an hour or less.

Of course, this thing was easy as anything to bring around. Even in my small jean pockets I had no trouble fitting the Lyfe in. If you thought other pod devices were small, wait until you hold this thing in person. Love it. 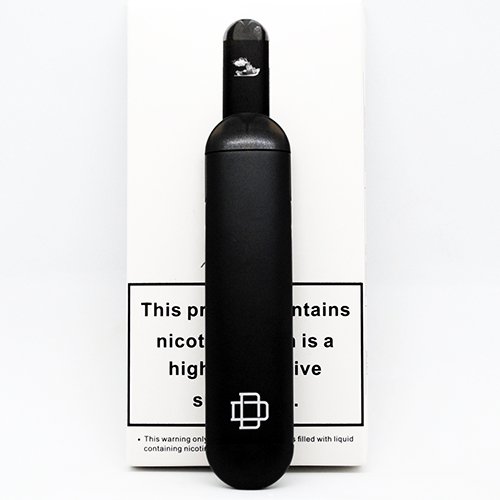 If you’re in the market for a new pod vape, should you get the Augvape Lyfe? From me, it’s a solid yes. This baby brings a new definition to ultra-portable, all while bringing excellent flavor and a leak free pod system.

The 2.0ohm coils combined with the low 7.6W max output uses less ejuice while still delivering a smooth and dense vapor. Plus, the tight MTL draw very closely mimics puffing on a cigarette; all factors that make for an excellent pod device. Whether using regular ejuice or nicotine salts, the Lyfe is perfectly suited for either.

Currently available for under $30 USD, you can’t really go wrong with picking one up. Even as a backup device, or one to have to vape a different flavor, it’s proven to be a great vape to have. Until next time folks, Stay Versed!