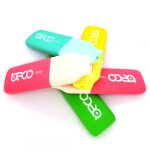 The BECO Slim is the latest disposable device from Beco Vape, a brand that specializes in disposable vapes. As the name suggests, it’s a slim disposable, but it still comes filled with 9ml  of ejuice and a 1150mAh battery which should provide up to 4500 puffs. The Beco Slim is powered by a 1.1Ω mesh coil that is made with food-grade 304 stainless steel, and there are 10 flavors available.

Beco Vape offers a variety of disposable devices and each one has a different form factor, puff count, and types of flavors. If you’re looking for a small disposable that is easily portable, they have that. Need a larger disposable that will last you for 6000+ puffs? They have that too.

Evidently, Beco Vape are no strangers to disposable vapes and they’ve made enough of them to (hopefully) know what they’re doing. I recently reviewed their Beco Soft disposables and I had a lot of good things to say, so I’m curious to see how this latest Beco disposable compares.

Beco Slim disposables stay true to their name and feature a skinny but tall body. Each one is 117mm tall, 34.5mm wide, and 13.5mm thick — it looks like they got run over by a steamroller and flattened out! They’re large, no doubt, but the slimness means that you can easily slide them in or out of your pockets. They’re just 53g too, so they’re relatively light and comfortable to carry on your person.

The wide, slim design also makes them comfortable to hold with your lips and vape with. This isn’t something that I do too often, but for times when I’m typing away at my computer (like while writing this review), it allows me to vape hands-free.

Like the Beco Soft, the Beco Slim has a soft-touch coating that feels very nice. This soft-touch material covers the bottom two-thirds of the body, which is right where you hold the device while vaping. The upper one-third of the body is made of a shiny plastic which extends out to the mouthpiece as well.

The mouthpiece is a wide oval shape that sits comfortable between my lips. Unfortunately, dirt and pocket lint collects in the center of the mouthpiece because it has a pretty deep ‘dip’ in the middle (where the airflow comes out of). You have to make sure you clean it out frequently, or you’ll run the risk of inhaling lint. Yuck.

On the front of the device, on the soft touch portion of the body, there’s a large BECO logo, and a smaller SLIM next to it. On the other side of the device is where you’ll find the flavor. All of the “Ice” flavors have a snowflake icon at the end of the flavor name, but oddly ‘Spearmint’ does not.

The printed flavor makes it easy to tell apart the flavors, as does the different colored bodies on each one. A few of the flavors share the same color scheme, like Peach Ice and Bubblegum Ice, but the color matches well enough to the flavor so this isn’t a big deal. 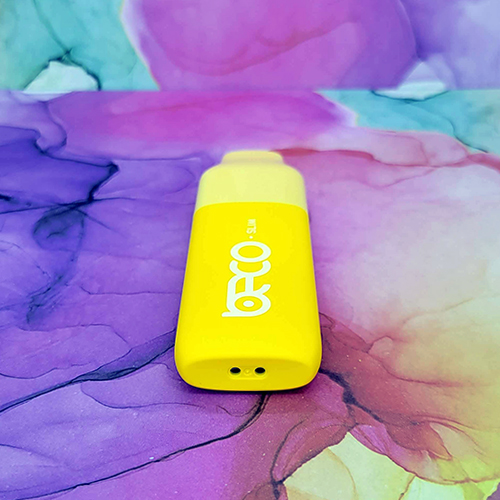 The bottom of the Beco Slim is flat, so they stand up straight, but I usually just left them lying on their sides because they topple over easily due to the slimness and lightweight.

The bottom of the device is where you’ll find the two large airflow holes, which is a good spot for them because they aren’t easily blocked. This is also where the LED indicator is located. It’s blue and not too bright, so it won’t attract the attention of everyone in a dark room.

That’s really all there is to the design of the Beco Slim. Although they are primarily made out of plastic, they feel really good in the hand thanks to the soft-touch coating that is on most of the device.

The soft-touch portion has a little bit of flex to it if you try to squeeze it, but none of my units have cracked at all. The creaking sounds that it makes when you squeeze it are going to lose it some points, but overall they seem to be well made. 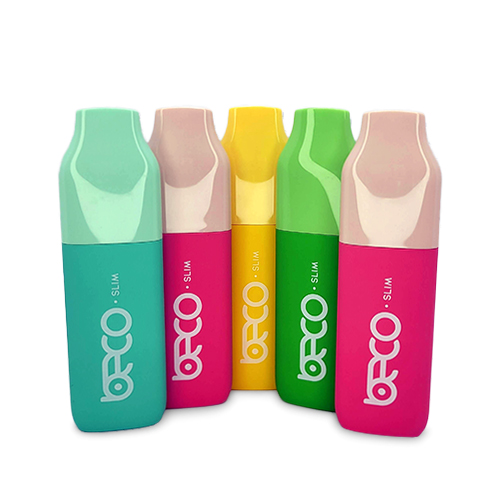 Much like the flavors for their other disposables, the flavors for the Beco Slim are mostly fruit options. If you like ‘Ice’ flavors then you’ll be pleased by their selection. However, non-ice vapers will be limited to two of their ten flavors, as the rest are ‘Ice’. The cooling in their flavors isn’t too intense though, so you may still enjoy their ice flavors, depending on your menthol tolerance.

I’m going to go over five of their ten flavors in this section: Grape Ice, Rainbow, Bubblegum Ice, Peach Ice, and Blueberry Raspberry. I’ll describe how these flavors taste to me and what I think of them, but keep in mind that just because I like a flavor does not mean that you will like it, and vice-versa. This is solely my subjective opinion.

This flavor is exactly what it says: bubblegum flavor with a touch of cooling. It’s like chewing on a stick of pink bubble gum. The flavor is subtle and it comes through the most prominently on the exhale, followed by a light cooling effect that non-ice vapers may still enjoy. I like this flavor, but enhancing the bubblegum flavor would make it better.

Grape Ice has a nice green grape flavor that is sweet to the right level. The ice is again not too strong, but a little stronger than Bubblegum Ice. The grape flavor comes through immediately on the inhale and lasts until the exhale. The intensity of the grapes is perfect.

This is my favorite out of all of the Beco Slim flavors. The blueberry and raspberry flavors are equally balanced for a perfect taste. You get the sweetness of the blueberries and also the slight tang from the raspberries. There’s no cooling of any sort, which makes this a prime choice for fruit lovers who don’t want any menthol at all in their vape.

This ambiguously named flavor is actually a candy flavor. It’s meant to mimic those small, circular, colorful, and chewy candies that rhyme with ‘fiddles’. It has a sharp initial taste, followed by light sweetness that doesn’t overpower you. I’m not sold on this flavor, as I feel it leaves a little something to be desired with the flavor profile, but it’s not bad. A little more sweetness, and a more defined candy flavor, would make this flavor better.

Sweet, ripe, and juicy peaches are what this one tastes like. There’s a level of cooling that is similar to Grape Ice. The cooling is noticeable, but not overpowering. The peach taste is right on and delicious, making this a close second to Blueberry Raspberry for me. I can easily recommend this flavor to fruit and peach vape lovers. 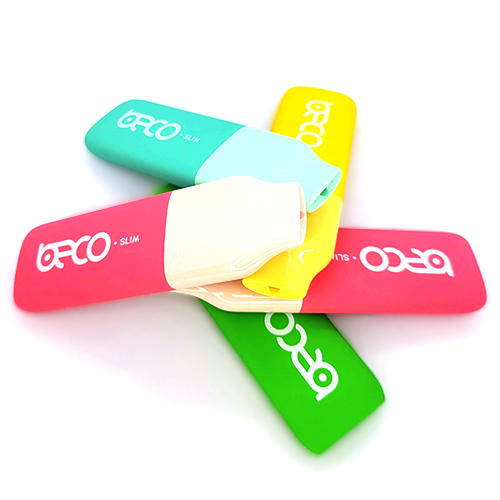 Each Beco Slim disposable uses a 1.1Ω, food-grade SS304 mesh coil as the heating element. This is the same type of coil used for their Beco Soft.

Each one comes filled with 9ml of ejuice and a 1150mAh battery, which should last for up to 4500 puffs before dying. These disposables are not rechargeable, so once they die, they’re done.

The stainless steel 304 mesh coil in the Beco Slim delivers good vapor that is warm and dense. The 50mg nicotine strength of the ejuice provides a high-level of satisfaction with each draw, so much so that just a few puffs have me feeling okay. There’s no need to chain vape on these, as the amount of vapor and nicotine that they deliver with each puff is very good.

I think that a major reason why the flavors that I tried are so good comes down to the coil. The flavor is clean and intense, which is surprising for a disposable. I wouldn’t say that it’s quite to the level of a pod vape, but the flavor from these disposables definitely gets them close.

There’s no adjustable airflow on the Beco Slim, so you have to live with the draw that it provides. Luckily for MTL vapers, these offer a tight MTL draw that is smooth and quiet. The draw activation is finely tuned and even better than the Beco Slim. It takes the right amount of pulling force to activate, but not too much.

Beco Vape has a good disposable on their hands with the Beco Slim. They’re a little tall and wide, but their slimness keeps them easy to slip into your pocket. They could definitely be smaller, but that would mean making them wider or losing some of the 4500 puffs, so there’s a reason for the size.

The soft touch coating is a nice touch that makes these a pleasure to hold in the hand. And even though they’re made of plastic, they don’t feel cheap at all.

Out of their ten flavors, eight of them are ‘Ice’, but the ones that I tried don’t have only a little cooling so even non-ice vapers may still like them. The SS304 mesh coil makes good use of the ejuice and delivers good flavor, vapor, and nicotine satisfaction. You don’t need to chain vape on these to feel satisfied, and that’s a big pro for the Beco Slim.