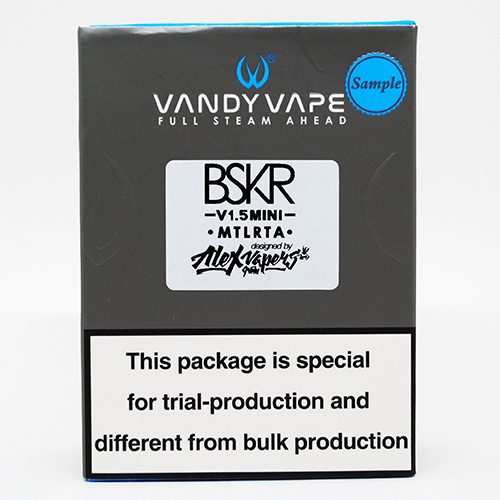 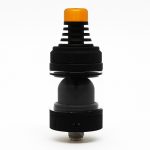 The BSKR V1.5 Mini is the follow-up to the BSKR RTA of last year. It’s a collaboration between Vandy Vape and Alex from VapersMD that is meant to provide a very tight MTL draw and features a two-post, single coil build deck. Meant to be used at low wattages, this makes the BSKR V1.5 Mini perfect for nic salts.

Compared to the BSKR V1.5 the two tanks are identical — the only real difference is their diameter; The BSKR V1.5 is a 22mm RTA as opposed to the 24mm diameter of the standard BSKR V1.5. This should mean an even tighter draw and hopefully better flavor, too. 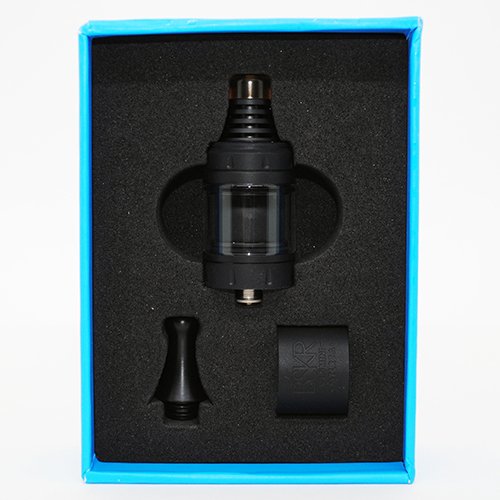 The BSKR V1.5 Mini has a nice design and good build quality. Everything is really well put together and it looks very clean. You get two 510 drip tips included with the BSKR and they’re both tall and narrow to bring a restricted MTL draw. One of the drip tips is metal and has a two-piece design where you can remove the top tip portion and replace it with either an amber ULTEM or black delrin tip to suit your style. Pretty cool. The second drip tip is made entirely of delrin and is slightly taller.

The top cap on this RTA is threaded and screws off of the tank to allow access to the fill ports. I’ve heard that some people have had trouble with the top cap being on too tight, but I personally didn’t have a problem. The top cap is snug enough that it won’t come undone in your pocket but is still easy enough to remove. It features a silicone gasket on its underside to prevent leaking and there are two large fill ports that make it easy to refill. You can fit any size bottle nozzle or dropper into the ports without a problem.

In addition to a standard 2ml glass tank section, a unique feature of this RTA is it’s included all-metal tank section. This metal section looks very neat and gives this RTA the appearance of an RDA while also upping the capacity to 2.5ml. However, I didn’t end up using it because you can’t see your ejuice level. I would have preferred if there was a cutout of some sort along the side to at least allow you to see your ejuice, but hopefully this will be a feature of the BSKR V2.0.

As its name implies, the BSKR V1.5 Mini is a purely MTL RTA with no possibility of a restricted DL hit. There is a single small airflow slot on one side of the RTA and this can be rotated to select one of five airflow holes: 1.0mm, 1.2mm, 1.4mm, 1.6mm or 1.8mm. This gives you a lot of versatility in terms of your draw preference but no matter which setting you choose it’s a very tight draw. Those who like MTL vapes will certainly love the very restricted airflow that this tank delivers.

Even on its most open setting of 1.8mm it’s still a super tight, restricted MTL hit. As you go down the airflow slot sizes it only gets more and more tight — on the lowest setting of 1.0mm it really takes a lot of effort to pull. I personally ended up sticking with the 1.4, 1.6 and 1.8mm airflow settings as I found that they delivered the best mix of MTL restriction and flavor. Regardless, I’d highly recommend trying them all out and finding out which one works best for you.

The build deck on the BSKR V1.5 Mini is very similar to the original BSKR. However, at only 22mm in diameter it’s a very small build space so you’ll have trouble fitting large/exotic coils if that’s your preference. There are two terminals that each use flathead screws to secure down a single coil. The build deck is slightly raised and requires you to position your coil legs opposite each other in order to be secured down by the screws — it’s kind of looks like your coil is doing the splits.

There is an airflow slot located directly under the coil. This slot directs air from the airflow slots and through your coil from below which should help with maximizing the flavor you get from this RTA. On either side of the build deck are two large wicking ports that can accommodate quite a bit of cotton. Like other RTAs, there is a domed chimney that goes over your coil and seals it off from the rest of the tank. At the bottom of the dome are small cutouts to allow your wicks to poke through and get saturated.

All-in-all, it’s a very simple build deck but it works really well. The way you have to position your coil legs opposite each other is a little different but it isn’t anything to complain about.

Building on the BSKR V1.5 Mini

Building on the BSKR V1.5 Mini is super straightforward and very simple to do. Included with the tank are two 0.7ohm Ni80 coils with an inner diameter of 2.5mm and this is what I used. As I mentioned earlier, your coil legs have to be facing opposite each other in order to be secured down. The included coils already come positioned in this way so it’s easy to install them.

You’ll want to start by loosening the screws a little. Once this is done you can insert both legs of your coil by sliding them underneath the screws. I tightened down the screws while making sure that the coil was centered over the bottom airflow slot, then cut off the excess leads. Installing your coil on this deck is basically dummy-proof as there’s very little that you can do wrong.

Once your coil is properly secured it’s time for wicking! This is just as simple as installing the coil but it does take a bit of know-how if you’re not experienced with RTAs. First off, I would highly suggest leaving your wicks long enough to fully touch the bottom of the wicking ports. I would also recommend combing, fluffing and spreading them out in the ports as well. Leaving your wicks just long enough to touch the bottom ensures that you won’t have any dry hits, while spreading them out will prevent your coil and build-deck from flooding. 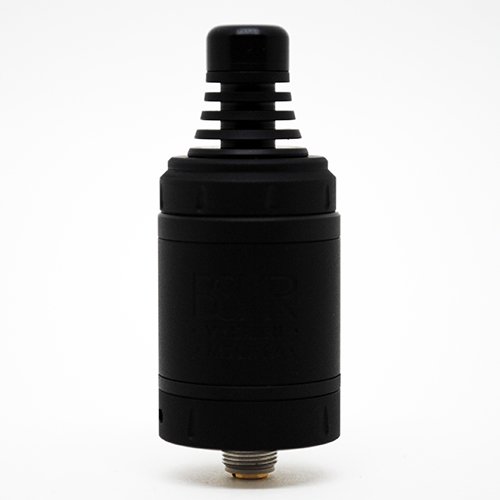 Now for the million dollar question: how does this super small RTA perform? In my opinion, Vandy Vape and Alex have done a great job as this is definitely an RTA that can hang with the best of them when it comes to flavor.

Using the included 0.7ohm coil, it actually ended up reading at 0.55ohm. I found that the BSKR V1.5 Mini worked best from 15-25W but the sweet spot was 21W. At this wattage the flavor was pretty incredible and I think that this is because of the combination of good design factors like its domed chimney, bottom airflow in the build deck and super restricted MTL draw.

Anything higher than 25W was a hotter vape than I was comfortable with and also ruined the flavor. For such a restricted MTL RTA, you’ll definitely want to stick with ultra low wattages for the best results. It’s also very discreet because of its low cloud output so you can vape quite stealthy-like while still getting better flavor and a more restricted hit than is possible with almost any other tank. Plus, this tank is perfect for use with nicotine salts; just make sure to keep the wattage low!

At the end of the day, is it worth picking up the BSKR V1.5 Mini RTA? Well, that really depends on how you like to vape. If you’re into MTL vaping and prefer a very restricted hit then I would definitely say yes. However, if you’re looking for something that gives you a more airy draw and allows you to blow massive clouds, it’s a definite no. Ultra-low wattages with great flavor are this RTA’s speciality. Trying to get anything else out of it will result in a super hot vape and perhaps even a burnt wick/coil. There just isn’t enough airflow, even on the most open setting, to allow for huge clouds.

What do you think about the BSKR V1.5 Mini? Let me know in the comments. Thanks for reading!