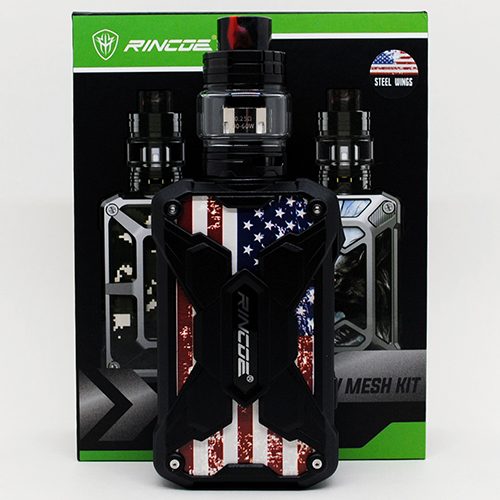 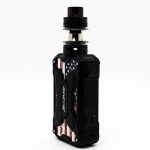 Rincoe are no strangers to vaping. Thanks to the unique styling of their Manto S and Manto Mini mods, they have been quite popular among vapers. Who doesn’t like a cool looking mod? The newest addition to their lineup is the Mechman 228W kit and it’s just as enticing and customizable as the rest.

The outside of the Mechman comes in three different stylings and there are three different choices of panel designs. But you can also remove the panels and replace the sticker with a custom-printed panel of your choice for added personal flare.

So it looks cool — but how does it perform? In this review I’m going to go over everything you need to know about the Rincoe Mechman kit and you can decide for yourself if it’s worth picking up. 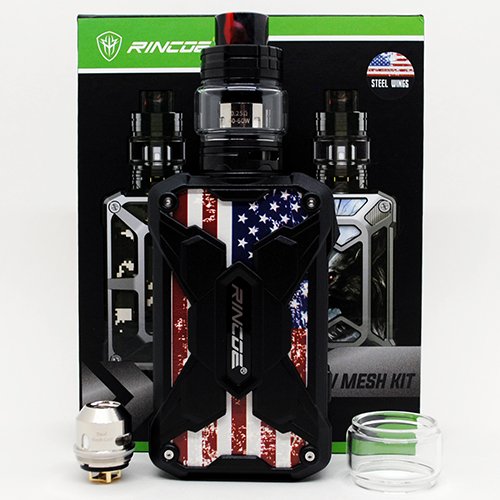 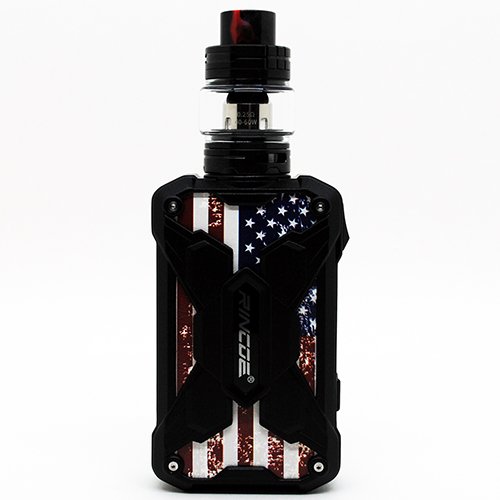 The Mechman gets it name from it’s all-metal, mechanical looking design. As a whole, it’s a pretty good looking kit. It’s not too heavy though, even with the batteries installed. You can get the mod in either black or silver with three different chassis styles: Steel Case, Steel Wings or Steel Bones. You can also get each style in four different panel designs: camouflage, American flag, Union flag or a mean looking wolf.

The mod is powered by dual 18650 batteries and fires at up to 228W in power mode. It has power mode, bypass mode, temperature control mode and TCR. As far as a menu goes, it doesn’t have one but this keeps the mod simple and easy to use.

The kit comes with the Mechman sub-ohm tank. It’s a 28mm tank made of stainless steel that uses a wide 810 resin drip tip. It comes with a 4.5ml capacity bubble glass and includes two different mesh coils. You get a 0.20ohm and a 0.25ohm coil with the kit.

My first impressions of the Mechman kit are pretty good. It looks good and feels good to hold. The 228W output is higher than most mods I’ve got a chance to review. Plus, it comes with some decent-looking mesh coils. We’ll see how it holds up.

The Mechman is a nice size for a dual battery mod. It’s not too tall and not too wide. It’s got rounded edges that make it comfortable to hold and it fit in my hand very comfortably. The body of the device is also made entirely of metal so it’s pretty durable. I got the black “Steel Wings” style of the mod for this review and the mechanical design is pretty cool — it looks very modern and clean. I got a number of compliments while using the mod from other fellow vapers and they all wanted to know where they could get one. That’s a really good sign in terms of design.

The American flag front panel is also very neat. If you’re from the U.S and looking to show your patriotism with a vape mod then this is definitely the one to do it with. But what’s neat about this mod is that you’re able to remove the “Steel Wings” that cover the front panel (provided you have access to a small torx screwdriver) and put a sticker of your choice underneath. I haven’t gotten around to printing off a “Versed Vaper” panel but it’s definitely on my to-do list. I haven’t seen another mod that allows you to do something like this so it’s definitely unique.

The back panel of the Mechman is a removable battery door. It’s magnetically attached and pulls off just like most other dual battery mods. This panel is similar in design to the front, with the Steel Wings, however you can’t remove the screws to insert a custom design. It’s got a grid-style pattern that matches the rest of the mod though so I have no complaints.

The 510 is centered and in my books that’s always a good thing;  it makes the mod look much nicer with a tank installed. There are three buttons: a rocker-style firing button and two smaller adjustment buttons. The fire button takes the perfect amount of pressure to press and isn’t too light. The adjustment buttons are also the same pressure-wise and feel just as firm and well-built.

The screen is large on the Mechman mod and the readouts are clear. It’s a black and white screen, not color, but that isn’t too big of a deal. There’s no way to adjust the brightness, but even outdoors I found it bright enough to see. Just under the screen and the buttons is a micro-USB port for firmware updates and charging. If you’re in a pickle this device does support pass-thru charging and that’s a pro.

The Mechman tank is 28mm in diameter. It matches the mod and uses a bubble glass that gives it a 4.5ml max capacity. In case you break the glass, the kit includes a spare identical glass which I rate. It’s got a wide 810 drip tip made of resin that is pretty nice but it’s also interchangeable with most other 810’s.

Like most other tanks on the market the Mechman tank is top filled and uses push-to-fill. It’s firm enough that it’s not going to open up in your pocket but easy enough to open without too much effort — it’s a happy medium. There’s a silicone gasket that surrounds the fill port to prevent leaking as well.

The airflow on the Mechman consists of two wide slots that are fully adjustable. They can be opened or closed according to your preference but it’s still going to be a direct-to-lung draw no matter how you position it. As opposed to the top cap, I found the airflow a bit too difficult to turn. It’s very tight so I found myself unscrewing the tank from the mod when trying to adjust it. It did loosen up a bit over time but I would have preferred the airflow control ring to be a bit easier to adjust.

Included with the kit are two mesh coils of different resistances. There’s a 0.20ohm dual mesh coil rated for 50-80W as well as a 0.25ohm single mesh coil rated for 40-60W. I got surprisingly good flavor and clouds out of both of these but I’ll go over their performance in depth a little later. 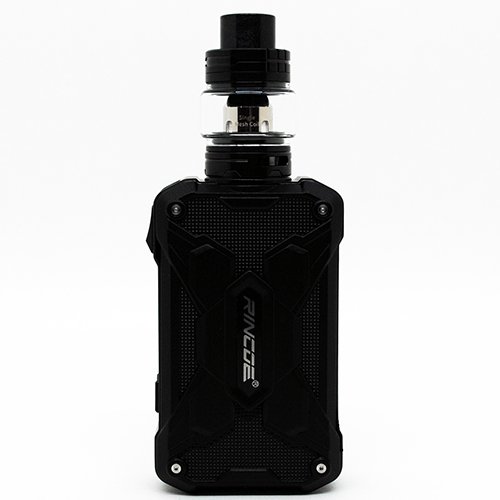 This mod fires quite a bit higher than most other mods on the market. In power mode you get up to 228W of output. It uses Rincoe’s in-house chip for regulation which comes with a bunch of safety features built-in. It’s got overheating protection, low voltage protection, short-circuit/overload protection, reverse battery protection as well as a 10 second cut off if you fire the mod for too long.

For firing modes you get Power mode, Bypass Mode, Temperature Control mode and TCR. This is pretty much all you need, but if you’re looking for variable voltage you’re not going to find it with this mod.

The UI displays your battery charge level, set mode, wattage, puff time, resistance and output voltage. It’s a bit of an old-school looking design but it works to provide the information that you need about your vape. This mod is also simple and straightforward to use because there is no menu.

Switch Modes: Press the fire button three times and use the adjustment buttons.

Lock the Device: Hold the + adjustment button and firing button.

I tested the Mechman mod using the included Mechman tank and both mesh coils. I also tested the mod using the Hellvape Hellbeast as well as with the Bonza V1.5 RDA. Performance wise, this kit is pretty good.

The Mechman mod is pretty impressive. I didn’t have a need, nor the coils, to push it past 150W so I didn’t get to test it at 228W. However, while it lacks a more advanced menu, it works great in power mode all the way up to 150W; it certainly felt like it was delivering the correct wattage. Additionally, the mod was really good at reading the resistance of my atomizers correctly.

On the temperature control side of things, the Mechman is like most mods: mediocre. I didn’t find that it was delivering the right temperature and instead it felt like it was way too cool of a vape when set at 450°F. I had to turn it up to around 520°F in order to get what felt like the correct vape of 450°F. I would steer clear of this mod if you’re planning on using it for temperature control.

Another thing to note about this mod is its Bypass mode. With the 0.23ohm coil that came included, Bypass mode fires at 183W! While most other regulated mods will limit the voltage, Rincoe have told me that this mod is unrestricted with its Bypass. This means that you get the full voltage output of both batteries on a full charge which is not very useful to be honest. The reason most other mods limit the wattage output in Bypass is so that you can actually vape at a reasonable level, not singe your lips off! Unless you like burning your coils, I wouldn’t use Bypass mode with this mod as it ends up outputting wattages/voltages that are way too high for your coils to handle.

The Mechman sub-ohm tank with the 0.25 single mesh coil was alright in terms of flavor. It wasn’t bad at all but it definitely isn’t the best coil that I’ve used. The flavor was good and the clouds were also decent. However, it didn’t bring out the full flavor in my ejuices and this was a bit disappointing. The 0.20ohm dual mesh coil on the other hand was much better. I was vaping it at from 75-85W and the flavor was very on-point and on-par with some of the better sub-ohm tanks that I’ve used. It actually exceeded my expectations for a kit-included tank. I really enjoyed using the dual mesh coil with this tank and it made the whole kit a quite enjoyable experience.

Using the Hellbeast sub-ohm tank with the Mechman mod was very good. It delivered an accurate power output and vaped really well. The same can be said about the Bonza V1.5. I used 0.2ohm fused claptons and it fired and vaped marvelously.

Lastly, I’m going to end this on another positive note. The battery efficiency of this mod is really, really good. The Rincoe chip seems to sip power. Even when vaping at higher wattages it still lasted me about two days on average before I had to recharge. Where I usually average a day or less with most other dual battery mods at the same wattages, I’m not sure what kind of magic is going on here. However, I’m not going to complain! 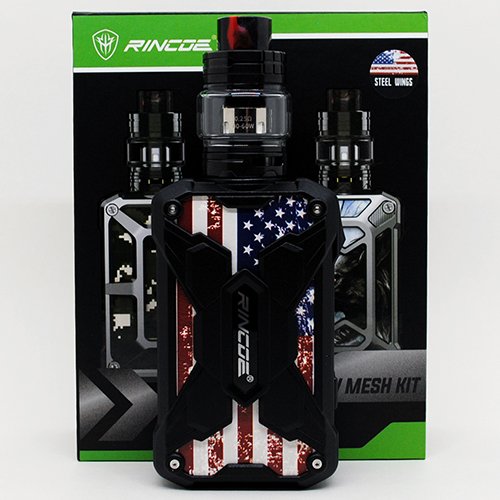 Overall, the Mechman kit is a good pickup for wattage mode vapers. The form factor is really nice and comparatively lightweight. Plus, the ability to swap our the panels for your own custom designs is something I’ve never seen before. This added personalization is really cool and I definitely rate it. It’s an awesome looking mod, that’s for sure!

The included Mechman sub-ohm tank functions well with the dual mesh coil and provides good flavor. Wattage mode works great and the battery efficiency of the mod is also notably good. However, for temperature control mode vapers I would suggest another mod.

What are your thoughts on the Mechman mod/kit? Let me know in the comments. Thanks for reading!