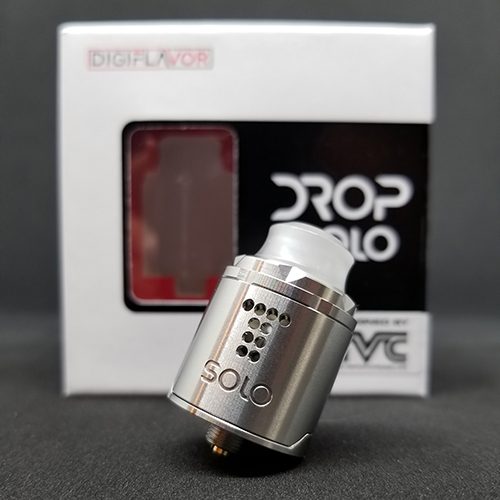 Home » Reviews » Drop Solo RDA Review — Does It Live Up To Its Big Brother?
RDA ReviewsReviews

Drop Solo RDA Review — Does It Live Up To Its Big Brother? 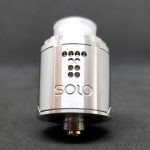 The Drop Solo is the follow-up successor to the wildly successful Drop RDA, and brings a dedicated single coil deck to the plate. The Drop Solo retains most of the features that made the original Drop such a great RDA, like the stepped airflow design and easy to use build deck. But it also introduces a few new goodies, such as a PMMA lower profile cap with less airflow holes, and a taller PMMA drip tip.

With the original Drop having been so great, there are high expectations from the community for the Drop Solo. So does it live up to its big brother? Sort of. 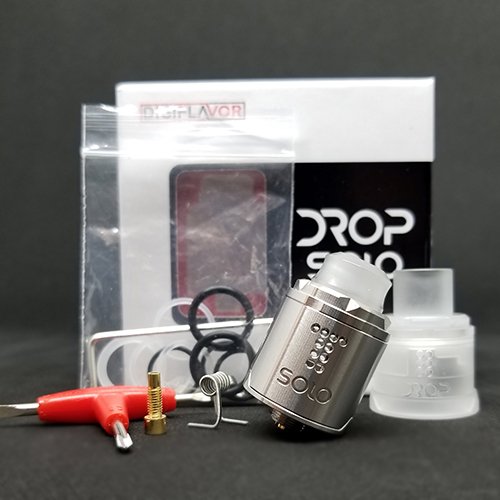 The Drop Solo is a very good looking RDA. Constructed out of stainless steel, it looks very similar to the original Drop, but with a much more detailed and refined design. Part of this design is the inclusion of a PMMA top cap and mid cap, in addition to your standard stainless steel caps. These PMMA caps transform the Drop Solo into a lower profile RDA with less airholes and a smaller chamber, for better flavor.

To start, both the stainless steel and the PMMA top caps have a set of notches on them. This is for better grip, as you have to turn the top cap on the Drop Solo to adjust the airflow. Unfortunately, I found twisting the stainless steel cap to be a nightmare. Even after I had vaped with it for a while, and thought that it had been well lubricated by my ejuice, the SS top cap was still a pain to turn. The PMMA caps, on the other hand, were a lot easier to use and I had no problem adjusting the airflow.

Sticking with the original design of the Drop, the Drop Solo has the same T-shaped airflow, consisting of ten small airflow holes. The PMMA cap however, has only six airflow holes in the body.

The Drop Solo also uses the familiar “stepped-cutout” design in the top cap for adjusting the airflow. With this design, you turn the top cap to adjust your airflow. This allows you to go all the way from one hole open, to all ten open, or anything in between. This is a feature that I really loved about the original Drop, and something that I’m very glad they kept with the Drop Solo. This design makes it very easy to find the perfect airflow setting, with precision unlike what you’ll get from any other RDA.

The juice well on the Drop Solo is as deep as the original at 5mm, and this allows you plenty of room to drip or squonk without having to worry about leaking. In my whole time using the Drop Solo with both the SS or PMMA caps, I didn’t experience a single instance of leaking. For an RDA, this is pretty impressive.

Last but not least, the included squonk pin with the Drop Solo sticks up quite a bit in the center of the deck. This makes it so that juice remains in the well after squonking, instead of being all sucked back into the bottle. I found that this made the squonking experience better, rather than worse, and the deep juice well definitely helped to hold the extra juice until it could be wicked up.

Building on the Drop Solo RDA

Just because there are less posts than the original doesn’t mean it’s less fun. When you’re building on the Drop Solo, you have a few options for how you want to insert and secure your leads:

The first way, and the way that most people will build on the Drop Solo, is to insert your leads from the top and bend your coil in towards the deck. This doesn’t work so well, because your coil ends up sitting too high and your legs get wonky.

The second way is by inserting your leads from the bottom, and bending the coil up. This also doesn’t work that well, because your end up with your coil too close to the deck.

The best way that I’ve found to build on the Drop Solo, is to insert one leg from the top, and one leg from the bottom. You’ll have to make an L out of each of your coil legs in opposite directions to do so, and it makes for optimal positioning of the coil in the deck.

After you’ve inserted your coil, there’s more than enough room to easily trim your excess. Overall, the building experience on the Drop Solo is very easy and seamless.

When it comes to the actual vaping performance of the Drop Solo, I have to say that I’m a little bit torn. While the design elements have stayed true to the original Drop which was an absolute flavor monster, the stainless steel Drop Solo just isn’t the same. The flavor just isn’t as popping as the original, even with the smaller chamber and short drip tip. I found the flavor was definitely above average, but not amazing.

Now, you might be wondering why I’m torn. Well, it’s because I absolutely loved the PMMA caps. With the included beauty ring, not only do you have an entirely new looking device, but it also vapes completely differently.

The lower profile of the PMMA cap and smaller chamber really help to concentrate the flavor, and this leads to a more dense and enjoyable vapor. I found four holes open to be the sweet spot with the Drop Solo and the PMMA cap, and I found using it with the lower profiled drip tip was the optimal setup.

So while I’m not a huge fan of the stainless steel body (not to mention your lips can touch and it gets hot!), the PMMA caps are a winner for me.

As for squonking, the pin sticks up a bit from the center of the deck. This allows some juice to stay in the well instead of being instantly drained and lessens the amount of times you have to squonk. I found the squonking performance of the Drop Solo to be quite good, and it won’t garner any complaints from me in this department. 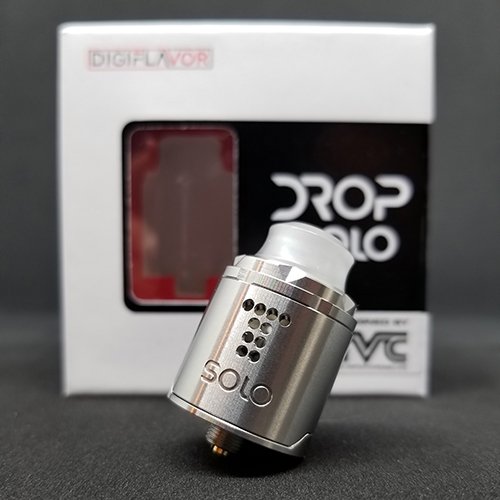 Overall, the Drop Solo doesn’t quite live up to the amazing flavor of the Drop with its stainless steel caps. But when you use the PMMA caps, you get flavor quality that is nearly on par with its predecessor.

The great airflow design and included top caps give you plenty of room to adjust and find the optimal airflow setting that you like. When it comes to the build deck, there is plenty of room to build and it’s a breeze to secure your coil. I loved that the squonk pin protrudes up from the build deck instead of sitting flush, because it worked well and lessened the amount of times I had to squonk.

If you already own the original Drop, and you’re looking for a single coil RDA, should you buy the Drop Solo? Probably not, as there really isn’t a lot of difference and there are some other, more unique single coil options out there.

However, if you don’t already own the original Drop RDA, I would highly recommend picking up the Drop Solo. The PMMA cap is a huge winner, and the overall design of this tank is great. So until next time, stay versed!

This tank was sent to us by Vape Sourcing for review. This does not in any way affect our opinion or ratings of the device.