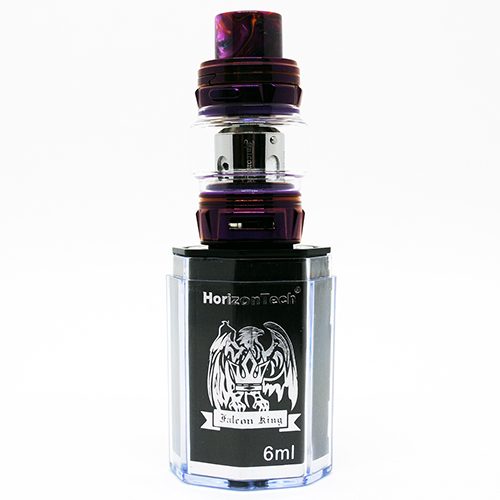 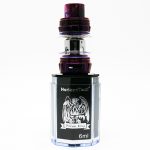 Use Our Exclusive Discount Code “VVFalKing” and Save $2.45!

There’s no doubt about it, Horizontech make great tanks. The Falcon was already one of the best sub-ohm tanks available and they’ve now followed it up with the Falcon King. It improves upon the already great Falcon platform and is compatible with all Falcon coils. Most interestingly however, the new Falcon King coils use bamboo fiber as their wicking material. Horizontech say that these coils will produce even better flavor than the originals so I’m very curious to test them out.

The Falcon King has a max capacity of 6ml, a convenient push-button fill cap, and comes in 10 different and beautiful colors. In this review I’ll go over all the details that you need to know about the Falcon King and find out for myself if these new bamboo coils are really as flavorful as they say. The tank used in this review was sent to me free of charge, from EightVape. 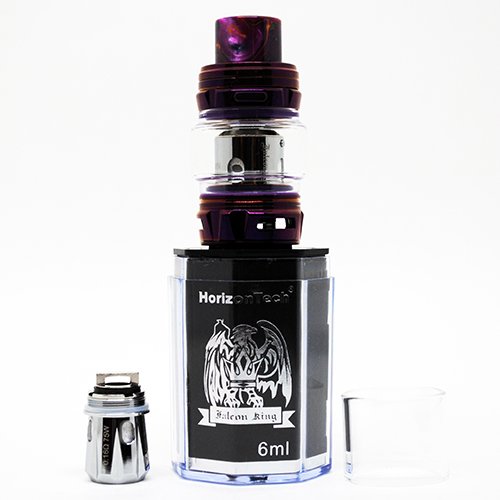 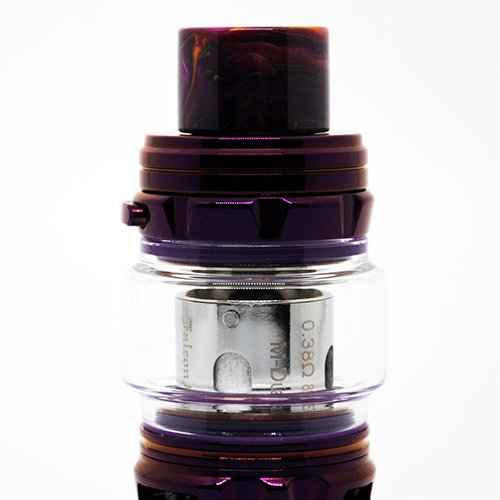 The Falcon King is available in ten different colors and each comes with a matching resin drip tip. For this review I was sent the purple color and it’s gorgeous. It’s a shiny almost mirror-finish that looks very cool in any lighting.

The base of the tank as well as the top cap have triangular notches cut into them that give the Falcon King a fancy and high-end appearance. This tank doesn’t look as basic as other sub-ohm tanks and you can immediately tell that there was a lot of time and thought put into its design.

The Falcon King also feels very well constructed and put together. From the drip tip to the top cap and down to the base of the tank, the entire thing is free of any defects or flaws. Everything is perfectly machined and flawlessly assembled. 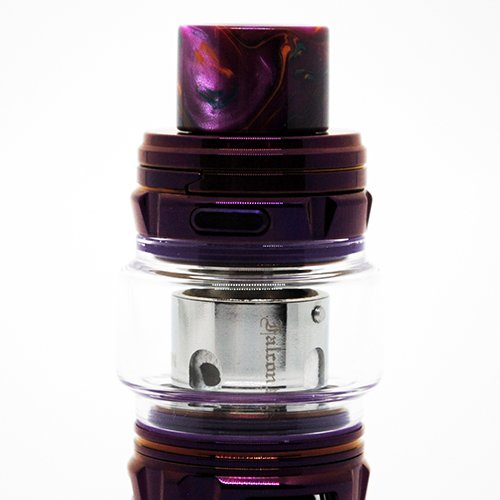 Filling this tank was extremely easy due to its push-button, top-fill design. At the top of the Falcon King, just under the top cap, is a button. When you push this button the top cap swivels open and reveals the fill port. At first, I was worried that the button would be too easy to press and that it would accidentally open in my pocket. However, the button is actually quite firm and takes a good level of pressure to activate. After using the Falcon King and having had it in my pocket multiple times without an issue, I’m confident in saying that it’s not going to open unless you’re actually trying to open it. When you’re done filling, you simply swivel the cap back and it locks firmly into place.

The fill port is large enough to allow all sorts of bottles to fit, including droppers. There’s also a silicone gasket around the fill port that helps to prevent leaking but I still got a little bit of juice around the top cap when I closed it. It never leaked from the top cap while it was closed though, so I’m just going to call this a minor con that I can live with.

Tank capacity is another highlight of the Falcon King. Out of the box it comes with a bubble glass installed that will hold up to 6ml of eliquid. This is on the larger-end of sub-ohm tanks. I appreciated the extra tank capacity here and I’m sure that you will too. The only downside is that this makes the tank a little bit taller and wider but I didn’t find it to make too much of a difference portability wise. In addition to the bubble glass you also get a replacement straight glass included. I would have preferred it to be an extra bubble glass but what can you do.

For airflow the Falcon King has three wide, fully adjustable airflow slots. You get a very airy DTL draw with the airflow fully open. If you close the airflow nearly all the way down it’s still a DTL draw but it’s a lot more restricted. I personally preferred to have the airflow nearly fully closed as I found that it delivered the best draw and flavor. With the airflow open I found it to be way too airy for my liking but you may disagree.

Perhaps most importantly, this tank doesn’t leak at all. Even after refilling the tank multiple times a day while vaping the coils to the end of their usable life, I didn’t have so much as a single drop of ejuice leak out of the airflow slots. Leaking can make or break an otherwise excellent tank so I’m very content with how leak-proof the Falcon King is.

The Falcon King comes with two all new coils: an M1+ 0.15ohm mesh coil and an M-Dual 0.38ohm dual mesh coil. Both of these coils use bamboo fiber instead of cotton for their wicking material and Horizontech say that this should improve both flavor and coil life. These coils are also quite large in comparison to other coils and this translated into better flavor and more vapor but the coils are also super thirsty. I wound up refilling at least twice a day with heavy vaping so you’ll be going through a lot of ejuice. I’ll go over their performance in detail a little later but they’re both very good. You also have the option of using coils from the original Falcon tank and these use a mix of wood pulp and cotton for wicking and are also great performers.

One thing I did note is that it seemed to take longer than normal for the coils to become fully saturated. I checked the coils through the top of the tank using the flashlight on my phone and it took around 10-15 minutes after priming and filling the tank for the coils to be fully soaked through and ready to vape. I would suggest priming and filling and letting them sit for even a little longer just to be extra sure that you don’t burn them out. However, once they were wicked for the first time they had no problem keeping up with my chain vaping and remained saturated.

The M1+ is a single mesh coil with bamboo fiber for wicking. It comes in at 0.15ohm and there are four large wicking ports on the sides of the coil. This made it easy to prime and it also allowed the coils to wick well with a variety of different VG/PG ejuices. I used 50/50, 70/30 and 80/20 ejuices with the same, great results.

The M-Dual coil is a dual 0.38ohm mesh coil and it also uses bamboo for wicking material. It has large wicking ports as well but there are also large holes in the ports of this coil. I think this is to allow it to absorb ejuice faster and boy does it do so. This coil was the thirstier of the two but I found it to deliver the best flavor. It worked well with all VG/PG mixes that I tried as well. 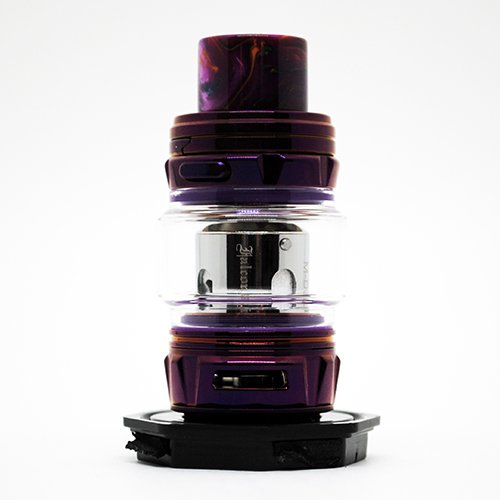 Everyone who’s used the Falcon King has called it the best sub-ohm tank out and I can see and taste why. Using the included coils with their bamboo fibre wicking I not only got incredible flavor but also super long coil life. I used each coil through multiple refills a day and at 70-80W each. After around a week of use, neither showed any sign of slowing down and this is where most coils would start to taste funky. But not these guys; the bamboo fibre is a game changer.

The draw on the Falcon King is also very, very airy with the airflow fully open. I got the best results by closing it most of the way until it was nearly fully restricted. This allowed me to get the best performance out of the coils and enhanced the flavor the most. You can get super open DTL or a more restricted DTL with the Falcon King but it should go without saying that you won’t be getting a MTL experience.

The M-1 coil was great for clouds and flavor, better than other single mesh coils out there for sure. It didn’t matter what type of ejuice I used, they all gave me some of the best taste that I had got out of them while using this tank. Now, it isn’t quite on the level of an RDA but it’s certainly a close rival.

The M-Dual coil was my favorite of the two and delivered even better flavor than the M-1. The double mesh was very enjoyable to use and it brought out all the right notes from my ejuices. Although, this coil was about as thirsty as they come. I was refilling at least twice to three times a day while using the M-Dual and going through a lot of ejuice. I would compare the ejuice usage to that of an RDA but the flavor is also almost just as great as some of the mid-tier RDAs. In this respect, I would say that it’s worth it but only if you can afford to go through a lot of ejuice.

Both coils were also easy to switch flavors with. Neither kept a lingering taste for too long and after 5-10 draws with the new ejuice filled up I couldn’t even taste the previous ejuices flavors. This has got to be due to the bamboo fiber as well and that’s another really positive note for bamboo. More manufacturers should start using bamboo because I’m a fan.

Once you try these coils I think you will be, too. 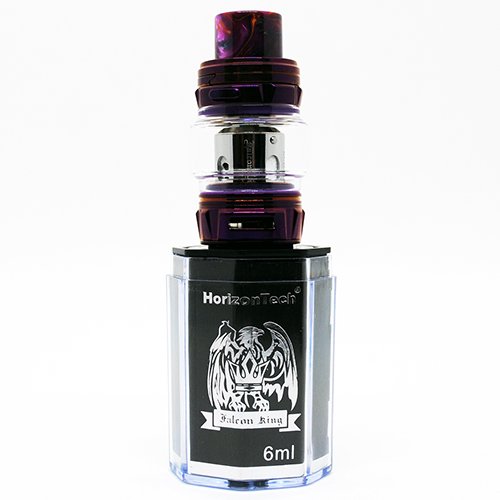 After using the Falcon King, I’m a believer. I think that this is certainly the best sub-ohm tank out right now. It’s got a large 6ml capacity and incredible flavor thanks to its two large mesh coils and their bamboo fiber wicks. These coils are thirsty though, so that’s something to keep in mind if you’re trying to conserve ejuice. Both coils wick great once they’re initially saturated and the draw that you get with the airflow mid-way closed is very enjoyable. The airflow fully open is a bit too much, but you may disagree with me here.

The push button to fill is great because it’s firm enough to not come loose in your pocket and makes filling quick and easy, so that’s another positive note. At this time, and I’m fairly confident in stating this: there isn’t another sub-ohm tank that is better than the Falcon King.

What do you think about the Falcon King? Let me know in the comments. Thank you for reading.

Use Our Exclusive Discount Code “VVFalKing” and Save $2.45!