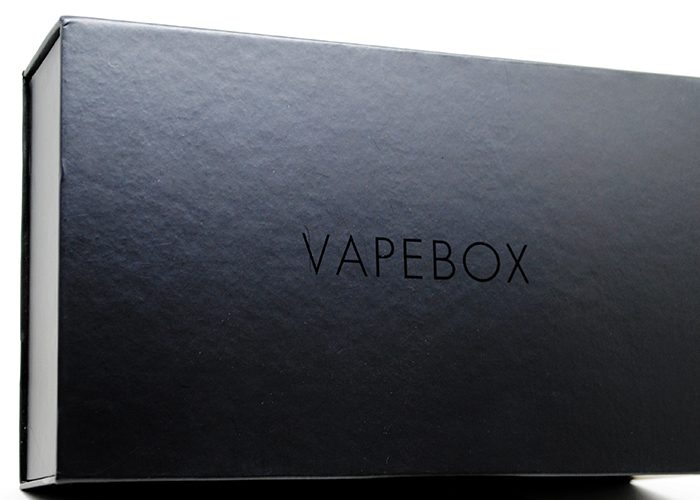 Now, I’ve been seeing a lot of hype surrounding their subscription service and this got me interested in trying it out for myself. A lot of people say that they’re the best vaping subscription box in the game because of the quality and value of ejuices and hardware that you get in each box. But is it really worth it? I subscribed for two months of their Enthusiast package to find out. 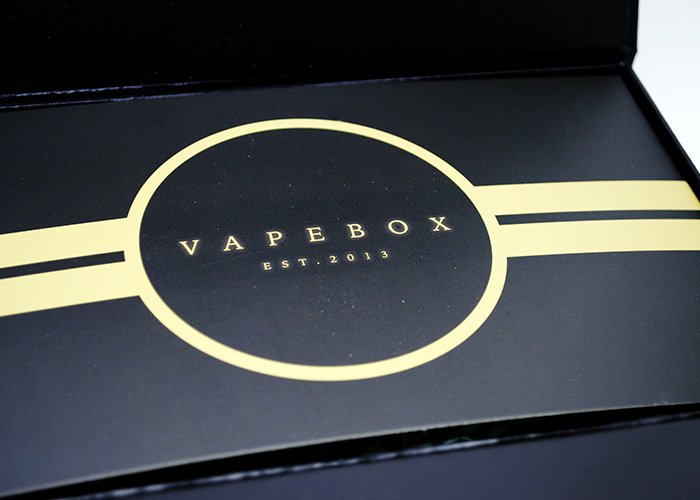 The first step in subscribing to Vapebox is choosing a plan. They have five plans to choose from with each offering increasing amounts of ejuice included in the monthly box. Their Enthusiast plan also gets you two pieces of hardware per month which is pretty neat if you’re like me and like tinkering with new tanks/devices every month. They also have a plan specifically for nicotine salts. Their five monthly plans are:

How Does It Work 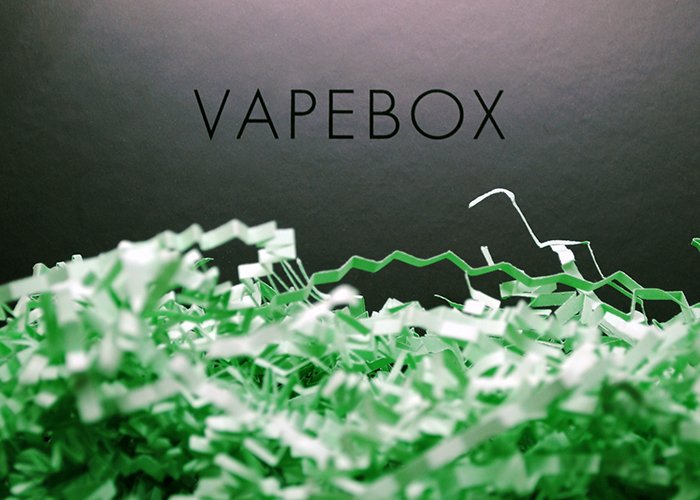 The first question was “What kind of atomizers do you vape on or would like to vape on?”. It said that I could select as many as I wanted and I was given three options: Vape Tanks, Rebuildable Dripping Atomizers (RDAs) and Rebuildable Tank Atomizers (RTAs). I chose all three because why not, I like and use them all!

The next question was “What kind of device do you use or would like to use?”. However, there was only one option and that was Variable Voltage Box Mods. I was a bit disappointed that there wasn’t the option for mechs or squonk mods. Technically, most squonk mods are variable and regulated though so you might still get one.

The following page was the most fun: I got to select the types of flavors that I like to vape. I was presented with eleven options: candy, fruits, cereal, creams, bakery, custards, tea, menthol, yogurt, coffee and tobacco.

I selected candy, fruit and cream as my flavors. I figured that these would be their most popular flavor selections, but I could be wrong. These are also the flavors that the most popular brands focus on so I was curious as to what ejuices they would send me.

Once you’ve selected your likes you can also pick the flavors that you don’t like to vape. I’d be careful with your choices here though because if you pick lets say strawberry as a dislike, you won’t get any ejuice that contains strawberry. I myself didn’t choose any dislikes — there’s an “I like all Vape Flavors” selection and this is what I chose.

For a lot of vapers one of the most important parts of any ejuice is the nicotine strength and on the next page you get to choose just that. There are four options: 0mg, 3mg, 6mg, or 6mg+. I chose the 6mg option but I do think that there should have been a 9mg option at the very least for those higher mg vapers. If you vape higher than 6mg you might not get all of the same mg strengths by choosing 6mg+. And if you vape at 12mg+ you’re probably out of luck because you’ll most likely receive a mix of 6mg and some 9mg ejuices although I can’t say for sure.

The last and final question is for special requests. You can specify the color of the mods/tanks you want to receive and further emphasize how much you love certain flavors. Vapebox state that they can’t make any guarantees but that they’ll try to accommodate your requests. For my special requests I put rainbow, purple or colorful gear. I like colors, what can I say? 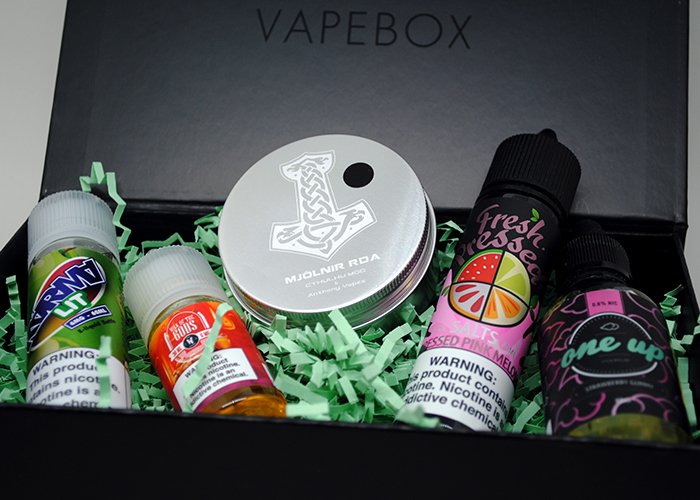 I subscribed to the Enthusiast plan and so far I’ve received two boxes from Vapebox. I’ll be upfront here and say straight away that I’m super impressed with what I got in each box and it certainly exceeded my expectations of what I would get. Each Vapebox comes as a black box with their logo on the top. And as far as boxes go, it’s a pretty nice box.

Once you open it up there’s a card that has all of the information about what you’ve received inside. It lists the names of all the hardware/ejuices you received as well as their PG/VG mix, nicotine strength and size, as well as why you received that ejuice (e.g: because you like candy flavored e-juices). Most interestingly though, it lists the retail price of  all of the items you got. This lets you see how much money you saved and also lets you know whether you got a good deal or not (I definitely did). My favorite part about the card is that it was personalized as “Adam’s April Vapebox Menu”; a neat and personal touch.

The first box that I received for April contained five ejuices, one sub-ohm tank and one accessory. I’ve listed the retail price for each one:

The ejuices in this one are absolutely spot on for what I had chosen in the questionnaire: I got one candy, two cream and two fruit flavored ejuices. Quality wise, they all taste great. I don’t feel that any of these are “bargain” ejuices and instead I feel the complete opposite. I got 210ml of tasty ejuice from some recognizable brands like BLVK Unicorn and that’s enough for me to feel like the $60 was worth the box. Plus, with a total retail price of $118.00 it was undoubtedly worth it.

On top of this I also got COTN threads and a Nepho tank in the color that I had asked for in the special requests section (rainbow). I think this shows that they actually care about what you’ve chosen and shows that they go out of their way to ensure that you get what you asked for. After all, they want to keep you a happy subscriber so why wouldn’t they? For April, you can count me as a happy subscriber.

In my May Vapebox I got some more tasty ejuice, as well as another piece of hardware:

For May I also got 210ml of ejuice and they are all just as alluring and tasty as the ones that I got in my April box. Out of all of them I think that the Strawberry Gummy is my favorite but it’s really hard to choose! Again, the ejuices are all of very high-quality and are without a doubt premium. If I were to buy them individually it would cost ~$76. Just in ejuices alone this Vapebox was worth the cost. Plus, when you take into account the time savings of not having to shop around for all of these individually I think that it’s pretty clear that I got a good deal for $60.

In this Vapebox I also got an awesome RDA: the Mjolnir by Cthulhu Mods. This is an RDA that I was meaning to get my hands but never got around to it so it’s perfect that it was included with this box. And at a retail price of $30 it’s basically a freebie! I wasted no time setting it up and started vaping with it right away (It’s awesome btw).

If you total this box up it comes out to a little less in retail value than Aprils Vapebox ($106 vs $118) but it was still a steal for $60 considering what I received. 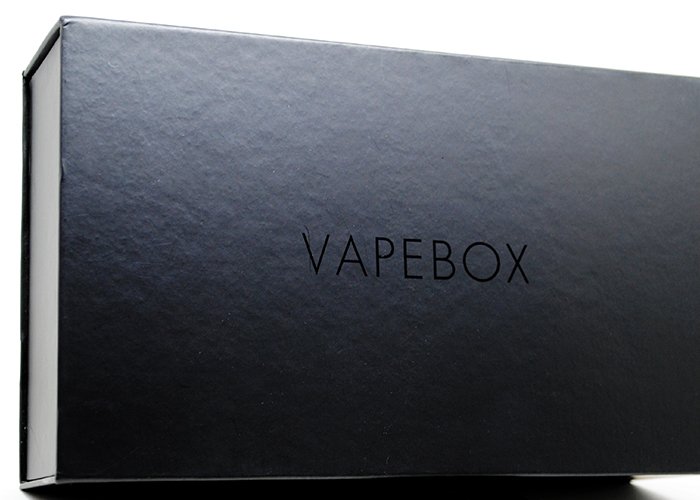 For a total of $120 I got 9 different premium ejuices in flavors that I absolutely love (420ml total), 2 great tanks from reputable brands and a package of COTN threads. Retail value of all of this is a grand total of $224 and that’s absolutely some great savings. Plus, purchasing all of this individually would have costed me time and extra shipping. From a purely economical standpoint, it was certainly worth it.

I love the two tanks that I got and I love the ejuices even more. They fit perfectly with what I had filled in for my questionnaire and that tells me that Vapebox truly want to make their customers happy. I can appreciate that. I didn’t get a box of stuff I would never use; I got a box of stuff that I’m going to use all of the time! My Vapebox subscription was worth it for more than just the money savings — it was worth it for the quality of the items.

What are your thoughts on Vapebox? Let me know in the comments and thank you for reading!