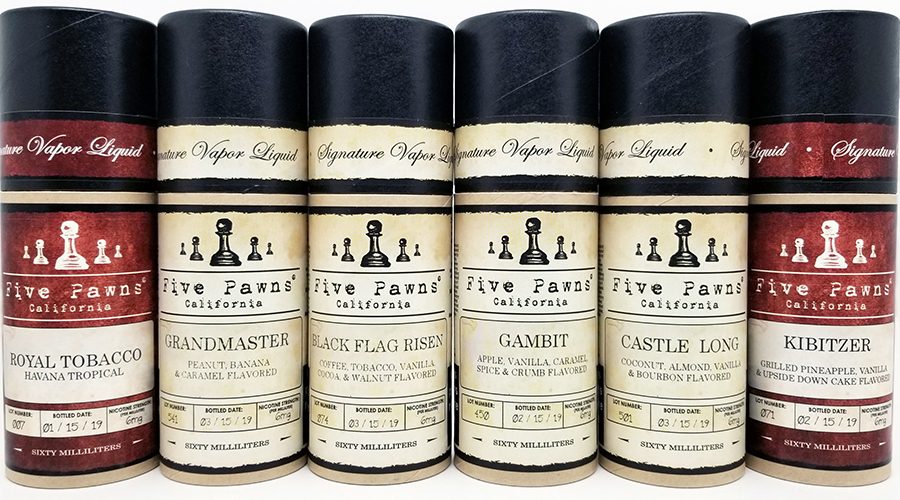 Five Pawns are an eliquid manufacturer that have had skin in the game for quite some time. They sell high-end eliquids that are smooth rich and refined, and everything about them is very much premium. They come in cardboard tubes that are fancy and nice with information about the date the juice was bottled, as well as a batch number — information you won’t find on your everyday, run-of-the-mill ejuice.

All of Five Pawns eliquids are produced in small batches of 300 and come bottled in either 30ml or 60ml glass bottles with droppers. Similar to the packaging, the labeling on the bottle tells you the bottled date and batch number, but it also tells you exactly which bottle you got from the batch(e.g: 133/300).

They currently carry three lines of ejuices: Original, Blue and Red. They also have a limited “Reserve” line that is aged and steeped in oak barrels for three weeks (talk about about fancy!) and only available once per year. For this review I was sent a few of their popular Original & Red ejuices to try, directly from Five Pawns. And with all the hype and rave reviews surrounding them, saying that I was excited would be an understatement.

In this Five Pawns e-juice review I’m going to go over these six flavor profiles and give you a good idea of what it’s like to vape Five Pawns ejuice. I’ll try to be as objective in describing them as I can, but I’ll of course include my personal thoughts as well.

These premium ejuices will cost you a bit more than your average ejuice, but quality always comes at a price. So the question is: is it worth it?

Five Pawns are born and bred in the USA and based out of Southern California. They started out in 2012 with a small but noble lineup. Since then, they’ve expanded their product line and grown a loyal, hardcore following of vapers that is nothing short of massive.

How they came to be called Five Pawns is interesting. Throughout their entire product line, Five Pawns has an ingredient component that satisfies each one of the five tastes (sweet, bitter, sour, salty, and savory). Hence, the name “Five Pawns”.

Everything about their company is professional and unlike any other brand that I’ve seen. They’ve got enticingly well-written flavor descriptions, super informative packaging and a well-defined, rich company history. Nothing about Five Pawns appears cheap or flakey and this is reflected in their pricing — at $27.50 for a 60ml bottle of their Original lineup, it’s not cheap. However, Five Pawns aren’t trying to be the cheapest. Rather, they’ve chosen to manufacturer small-batch, handcrafted, quality ejuices over mass-produced bottled PG & VG. And just by looking at their enormous fan base and overwhelmingly positive reviews, they’re clearly doing something right.

If you’re looking for a tobacco taste that is different from your same plain-old flavors, Havana Tropical might be what you’re looking for. You get a rich and smooth, almost spicy taste that hits you on the inhale, mixed with a pronounced fruity flavor. The fruity (pineapple and guava perhaps?)  taste is definitely at the forefront of the flavor profile and I found it to be well balanced by the nuanced tobacco leaf-esque notes. As a tobacco and fruit flavor I found it to be very unique in taste.

Inspired by an eccentric drink called “Cigarettes & Coffee” at a local Five Pawns watering hole. We’ve introduced a hint of flue cured sweet Virginia tobacco leaf to our cappuccino, truffle cream, and mocha dusted black walnut to mimic two flavors that go together like no other.

While never a cigar smoker myself, a nice cigar is exactly what this ejuice reminds me of. It’s got a strong, authentic tobacco taste that blasts your taste buds on the inhale. It’s really quite tasty. But what makes this ejuice even more enjoyable are the coffee and nut flavors that are perfectly mixed in. You taste all three at once; a cigar, a nice cup of joe and walnuts. The coffee and nut flavors are subdued in comparison to the strong tobacco taste and to me this is a perfect mix. It’s a unique flavor experience that I can safely say I’ve never had before. Black Flag Risen might be my favorite ejuice of the bunch.

Tasting every bit like a traditional pineapple upside-down cake, this blend uses a grilled pineapple note to bring out the sweetness instead of it being tart or sour. You’ll taste a pineapple that appears to have been grilled over a wood-burning flame and balances well with a moist yellow cake. After being prepared, it’s turned upside-down to allow the caramel-like pineapple reduction to live on the top of the cake and fully saturate everything below it.

Mmm! Pineapple upside down cake is definitely what this ejuice tastes like. It’s spot on. The beautiful part about this flavor is that it’s unlike other tart and sour pineapple ejuices. Rather, the pineapple flavor is perfectly sweet. I think this is because it’s balanced out by the smooth cake and low-key vanilla that genuinely round out the taste well. Ripe pineapple is the star of the show but dessert lovers will definitely love the cakey notes that compliment it. Out of the six ejuices I was sent, this is the one that I’m finishing off the fastest! It’s a testament to how good this ejuice really is.

Our non-barrel aged version is a combination of the dark, refined spirit of Kentucky Bourbon, accented with toasted coconut, roasted almond, Madagascar vanilla bean, and laced with a caramelized brown sugar.

Castle Long is a meld of flavors that mix and sit perfectly together in your mouth. At any one time it was hard to put a finger on exactly which flavor I was tasting; the bourbon, almonds, vanilla and brown sugar hit your taste buds in tandem. This had me taking draw after draw trying to pinpoint which one I was getting, but I never did manage to put my finger on a single flavor. Instead, I rather enjoyed how they came together to bring a unique and satisfying vape. The coconut flavor is a little more reserved than the others but it’s definitely still there. I also found the aftertaste to be one of the best parts about this ejuice. I have to say, my palate was pleased.

The classic, mellow apple pie makes a sweet and savory impression with flaky crust and decadent caramel, lightened by a dollop of French vanilla ice cream and unsweetened whipped cream.

Before I even tried this ejuice the description had my mouth watering. And when I vaped it, it almost had me drooling — no exaggeration, Gambit is heavenly. I mean come on now, how could I not like an apple pie ejuice? Especially one mixed in with french vanilla ice cream. It’s not too sweet or overpowering and is instead a light apple pie with strong french vanilla overtones. It’s a really mellow, pleasant vape. I think that you would be hard-pressed to find another apple pie ejuice that’s better. Personally, I’m going to be getting another bottle. Apple-pie all day without feeling guilty? Count me in.

This well-balanced taste of smooth, creamy, rich peanut butter and banana cream is drizzled with velvety caramel, creating a multi-layered and savory symmetry.

If you want a unique flavor, peanut butter and banana cream is about as unique as they come. With each draw I got a different taste on the inhale and a similarly different taste on the exhale. Sometimes I would taste the banana cream on the inhale and then exhale the peanut butter. At other times, it would be the opposite. In any case, Grandmaster is similar to Gambit in that it isn’t too overpowering but is instead just right with its mix. A caramel flavoring is also present in this eliquid but I found it to be secondary to the primary banana and PB.

Now, although I found it to be my least favorite flavor of the bunch it’s still by no means a bad ejuice. I’m just not too fond of peanut butter as a food and I’ve just found out that I’m not the biggest fan of it in my ejuices either. However, if you like peanut butter this could definitely be the ejuice for you. Plus, judging by the overwhelmingly positive reviews online it seems that a lot of vapers would disagree with me here. The two words I found that best describe Grandmaster are: rich and creamy.

All things considered, Five Pawns is definitely premium ejuice; you can certainly taste the quality difference in the blends. The flavors mix together perfectly and don’t leave any sort of bad aftertaste. Rather, the aftertastes are actually one of the best parts about these ejuices. The flavor profiles are also rockin’ and keep you coming back for draw after draw just to pinpoint what you’re tasting. Yes, they are a little pricier than your average ejuice but I think that they’re worth every penny. If you’re bored of vaping the same old flavors all the time, give Five Pawns a try. I can guarantee that you won’t be disappointed.