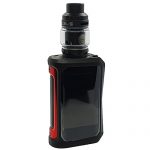 The Aegis X has been out a while now and the Aegis line has seen many new additions since the original Aegis was first released.

The Aegis X is the updated version of the Aegis Legend and features a large 2.4” TFT display, a new chipset, as well as all of the features we have come to expect from the Aegis line of products; shockproof, waterproof, dust proof, a robust and durable design. Although I’m a bit late to the game, maybe this review will help you if you’re looking at picking up an Aegis X.

Disclaimer: this kit was sent to me by Sourcemore for review.

The Aegis X will feel familiar if you have used an Aegis Legend. It has a similar design to it’s older brother; the rubber protection around the outside, the leather cushion, the trigger style fire button, the Aegis skeletal frame. It has some subtle differences such as the rubber now having a more bevelled edge, and this just refines the design of the Legend, making it even more comfortable to hold.

The Aegis X is available in a number of colours. The mod will always be black and the colour options will change the skeleton frame and leather pad. Instead of listing the colour options, I’ll just include a photo of them.

The big difference from the legend is the relocating of the screen. Geekvape has taken away the rather small screen that used to sit on the side between the fire button and adjustment buttons and instead placed a huge screen on one of the larger sides.

The screen itself is full colour, bright and vivid. It’s a really nice screen which is easy to read, even in sunlight.

On the top of the mod is a spring loaded 510 connector which is located centrally.

Also on top is a micro USB port, which is located beneath a rubber bung to ensure it’s kept watertight. This bung is very thick and sturdy and sits in place very tightly. You also get a spare in the box.

On the bottom of the device is the spring loaded battery door. It has a sliding latch which releases the door catch and the door then pops open. There is a waterproof seal on the door also. On the outside of the door are battery venting holes, these are waterproof too, being sealed on the inside by a seal that breaks away if the batteries were to vent.

Inside the battery compartment the polarity is clearly marked at the bottom and also on the contacts on the inside of the battery door.

On the side of the Aegis X is the fire button. It is a trigger style button which has a nice click to it when pressed. It feels nice to use and also to rest your forefinger on when holding the mod. Below the fire button you have two up and down adjustment buttons, again these are clicky and responsive to press. Underneath the adjustment buttons is the Aegis branding.

On the back of the Aegis X is the now infamous Aegis skeletal frame. Within the frame is the leather cushion which adds comfort while holding the device.

It’s hard to explain how comfortable the Aegis X is to hold. The Legend was comfortable, but Geekvape has managed to improve upon it. The curved section fits perfectly into your hand and the rubber provides so much grip. The leather pad cushions your thumb joint. Once I started using it my hand just felt lost whenever I put the mod down. It’s a masterclass in ergonomic design.

The build quality is what has become expected of the Aegis line. Rugged and durable, yet it still manages to be stylish too. 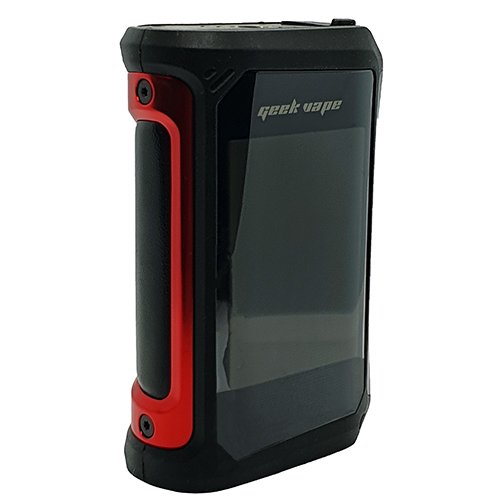 The device is turned on or off with the standard five clicks of the fire button.

You can also adjust the ramp up time by highlighting standard and then cycling between soft, standard and powerful.

When in power mode the adjustment buttons will change your wattage output.

VPC mode will allow you to dial in your own power curve over time. There are six phases that you can adjust.

You have TC profiles for Stainless Steel, Nickel and Titanium and if you are using a different material as a coil you can dial in the TCR value by using the TCR mode.

You can reset the coil resistance value or the puff counter by highlighting these during mode select.

To enter the menu you press the up and down buttons together while in mode select. This will bring up a menu.

I have no idea what AUTO does as it doesn’t state this is in the manual.

THEME will let you change the theme of the screen between three different types.

COLOR lets you adjust the colour scheme of the screen between five different types.

VERSION lets you view the firmware version of the device.

ABB let’s you toggle auto battery balance on or off. When on this will try and balance each battery to a state where they are discharging voltage at the same amount.

RESET will reset all adjustments to factory settings.

There are also some further button combinations which I will list below:

The menu system may seem a little complicated with it being split between changing options one the main screen via highlighting and then having an additional menu, but in all honesty it doesn’t take long to get to grips with.

Overall, the Aegis X is a fully featured mod, with plenty of options for those who want to use them. But a beginner would be able to cope with it also, and then they would always have additional options as they became more experienced with vaping. 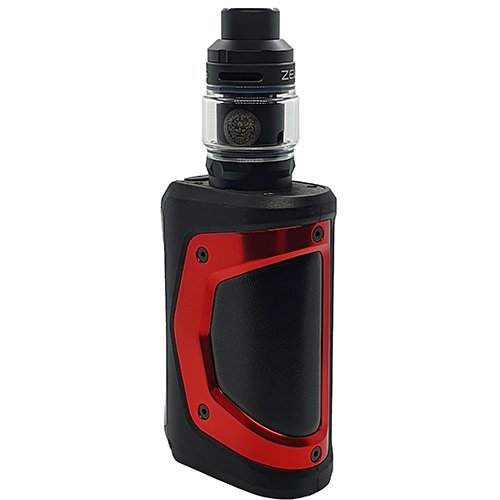 The Zeus tank features a top airflow adjustment, which Geekvape claims is leakproof. It looks very similar to the Zeus X RTA. It has a quick change prebuilt coil system, where you unscrew the base of the tank then pull out the coil with either your fingers or using the provided coil removal tool, push in a new coil, and screw the base back on.

The Zeus sub ohm tank has a combination of direct top airflow and top to bottom airflow, which Geekvape say increases both flavour and vapour production.

From the top, the tank has an 810 drip tip which I found to be really comfortable when using. The drip tip has a matt finish to it which I really like.

The top cap is unscrewed with a quarter turn and it then detaches completely. This reveals two large, kidney shaped holes for inserting your liquid. The fill ports are recessed in a sloped trough which makes it harder to spill liquid when filling up. The top cap is very smooth to screw or unscrew and once on it is very tight fitting.

The airflow control ring is smooth to turn but has a nice restriction to it, which will avoid any unwanted adjustments.

The pre-installed bubble glass has a 5ml capacity for liquid and the spare straight glass has a 3.5ml liquid capacity.

Inside the tank is the chamber that your coil sits within. It has the Zeus logo which is visible through the glass. It also has two large wicking ports on either side where your liquid wicks into the cotton of the coils. During use you will see bubbles escaping through these ports as the wicking process takes place.

The base at the bottom has some nice chunky knurling to allow you to unscrew the tank from your mod and also undo the base from the tank for swapping coils. It also has a gold plated 510 connection pin, the Zeus name and usual compliance logos on the bottom. 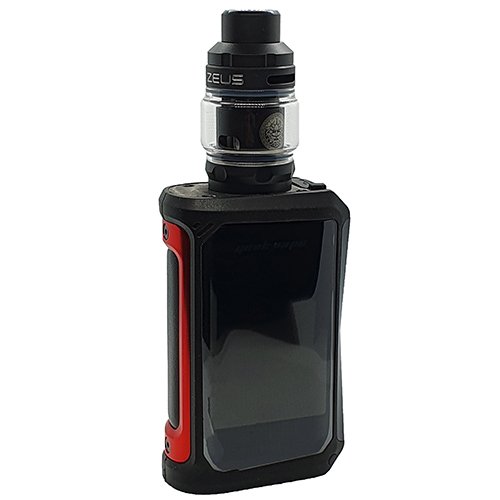 So how does the Aegis X and Zeus sub ohm tank kit perform?

I used the Z2 coil first as it came pre-installed in the tank. Usually I would prime the coil with some liquid on the wicking ports first but as I knew I wouldn’t be using the tank straight away, I just filled it up and left it for a while.

I personally don’t usually vape at high wattages, but as the coil is rated between 70-80W I started at 50W. Even at 50W the flavour is nice with the Z2 coil. At 60W flavour increases, and 70W there is more flavour and a nice warmth. 80W gives lovely flavour and more warmth, probably a little too much for me, but certainly not hot. Wicking keeps up even at 80W and I experienced no dry hits at all. Great flavour from the Z2 coil and excellent performance.

Airflow is nice and smooth on the Zeus sub ohm tank, wide open it is airy but not at all turbulent and not noisy either. I like it half open, where it increases the flavour even more.

Overall, two very well performing coils. For me the Zeus Sub Ohm, with either of these coils, is exactly what I want from a sub tank. Great flavour production and both coils have lasted. I’ve put about 50ml of liquid through each of them and they’re still performing.

I cannot fault either the Aegis X or the Zeus sub ohm tank. As a kit this is perfect. There isn’t a single con I can come up with for either the mod or tank. The menu system may take a little getting used to, but overall this kit is perfect.

The Aegis mod is built to last. It has an IP67 rating meaning it is shockproof, waterproof and dust proof. It is the most comfortable mod I have used, fitting in your hand perfectly. It feels solid to hold, but isn’t too heavy. The rubber gives the mod protection but also enhances the comfort.

The Zeus sub ohm tank performs flawlessly too. Great flavour, zero leaks, looks good, smooth airflow, comfortable drip tip. The coils wick great, giving no dry hits, they are easy to install or remove with the push / pull fitting. You can even swap coils with a tank full of liquid (obviously do this while the tank is upside down!)

Overall, I can only say that this kit comes highly recommended. If I were to lose it somehow, I’d have to go out and replace it.

I love switching up set ups and trying new mods, tanks and AIO’s. However, if I had to just have one mod and sub ohm tank, this would be it. This is now my set up for work due to the durability of the mod. I may throw my Zeus X RTA onto the Aegis X once the coils go, but if I can’t replicate the performance of the Zeus sub ohm tank with the Zeus X RTA I’m going to have to buy more coils for the sub ohm tank and stick with that.

I know the Aegis X has been out for a while now, so many people will already have it. If you haven’t got one or were looking for a new mod, I can’t recommend it highly enough. While you’re at it you may as well get the kit with the Zeus sub ohm tank as it won’t disappoint.

Thank you for reading and thank you to Sourcemore for sending this kit to me for review.