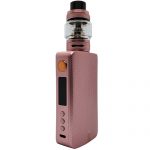 The Vaporesso Gen S kit is a just-released refresh kit for the Vaporesso Gen. This kit includes the Gen S mod and the all-new NRG-S tank. The Gen S mod is nearly identical to the original Gen mod, but now comes in a few additional colors that weren’t previously available for the Gen.

For anyone who is unfamiliar, the Gen S is a dual 18650 battery box mod that will fire at up 220W. It uses Vaporesso’s latest chipset, the AXON chip, and comes with almost every mode you could want on a box mod.

While the Gen S is not much different than the Gen, the NRG-S tank that comes with this kit is all-new. It has a 25.5mm base diameter and a massive 8ml eliquid capacity tank. The NRG-S uses Vaporesso’s GT Coils; the same coils used by the NRG PE tank that comes with the Vaporesso Swag II. There are currently 9 GT coils available.

Is the Gen S kit worth picking up? Or if you have the original Gen, is it worth upgrading for? Read on to find out!

This item was sent to us for review directly from Vaporesso. 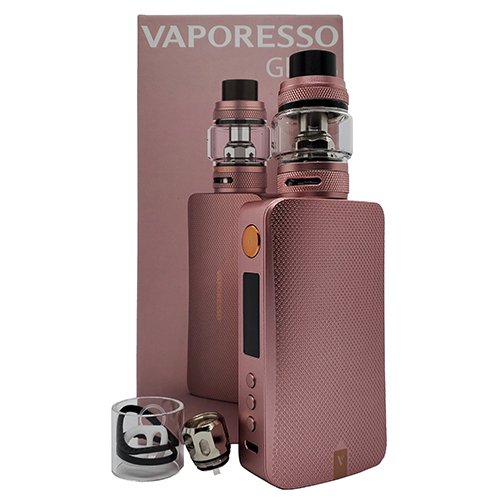 The all-new Gen S is pretty — pretty much the same as the original. Could the S stand for ‘Same’? I joke, but really there isn’t that much that has changed with this mod compared to the original Gen. For those of you unfamiliar with the Gen, I’ll break it down.

One of my favorite things about this mod is the paint. It’s the same soft touch, semi-rubberized coating as the Gen and Gen Nano. It’s not heavily coated, but just coated enough that you notice it’s there.

The shape and size of this mod are perfect. It’s an average sized box mod at 90mm tall, 53mm wide and 30mm thick. It’s also extremely light weight for a dual battery box mod, much lighter than you would expect.

The dimpled front and back panels are curved to fit nicely in your palm. The fire button and logos are finished in a bronze color that pairs perfectly with my rose gold unit (yes, they sent me the Rose Gold, but it is what it is). The fire button and adjustment buttons are very well made and feel responsive when used.

The Gen S features a spring-loaded, gold plated 510. It’s centered and can take up to 26mm tanks without overhang. The battery door is magnetically secured and fits securely with no wiggle or movement whatsoever.

Up to this point, the Gen S is identical to the original Gen. However, I did notice some very minor changes. The one obvious change (if you can really call it that) is the availability of new colors. You can now get the Gen S in lime green, cherry pink, matte grey, midnight blue or rose gold, and this is in addition to the seven original colors.

The only real change I noticed is the screen. The original Gen had a screen with a slight blue tint, but the screen on the Gen S is clearer, brighter, and whiter. By comparison, this screen is just overall better. Wait, I get it now. The S stands for ‘Screen’!

Again, I joke, but as a whole the Gen S is pretty well identical to the original Gen. Yeah, the screen is brighter and better, but I don’t think that qualifies it as an upgrade. 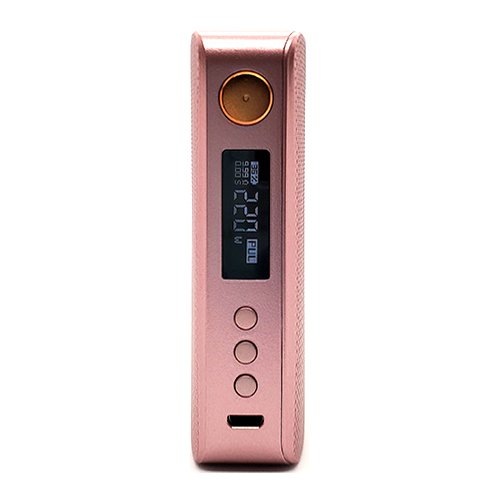 The Gen S is just as mode and feature packed as the original Gen. If you’re hoping that this mod has a particular mode, it probably does. It’s also an absolute powerhouse that can fire at up to 220W in wattage mode and from 200-600°F in TC mode.

For temperature control vaping there is your normal SS, TI, and NI modes. You can change the TCR value for each mode as well as set your wattage. In addition to these three TC modes, there’s also a manual mode where you can input your TCR value and wattage.

In addition to these more common and expected modes, there are four additional “special” modes. Pulse mode is the default mode on the Gen S. It works similar to regular wattage mode except it pulses the wattage every 0.02S. This pulsing isn’t noticeable when you’re taking a draw but I feel like it does make a difference to the flavor and temperature of the vapor. Compared to regular wattage mode vaping, longer draws feel smoother and the vapor doesn’t feel as hot.

Power Eco is a mode that helps to preserve battery life. The Gen S will ask you if you want to change the mode to Power Eco when you get to around 40% battery. You can also make Power Eco mode turn on automatically by turning on “Auto Eco” in the settings menu.

Smart TC mode automatically detects your coil materials and sets the correct TC mode for that material. I found this to be hit or miss and sometimes the Gen S didn’t correctly identify my coil. If this happens you can still set the TC mode manually, so this isn’t too big of a deal.

Super Player mode allows you to vape on super low builds that wouldn’t normally fire on other mods.

Lock the adjustment/menu buttons: Three clicks on the fire button.

Enter the Menu: Three clicks on the middle adjustment button.

The NRG-S tank gives me some serious OFRF NexMesh vibes. It looks similar, but the NRG-S has knurling on the top cap and airflow control ring. This is a tank with a 25.5mm base diameter and it fits just right on the Gen S.

The filling system is easy to use. The top cap slides and swivels back to reveal a silicone lined fill port. This cap takes a decent amount of pressure to pop open but I could see it becoming looser over time. As it is now, it’s firm enough that it doesn’t open accidentally.

Eliquid capacity for this tank is great. It can hold 8ml of ejuice with the bubble glass and 5ml with the straight glass. This is one of the largest capacities that I’ve seen on a tank — it doesn’t get much larger than this.

There are two large airflow slots and these are fully adjustable. The airflow control ring is a on stopper so it can be fully closed if needed.

The NRG-S can take any of Vaporesso’s GT coils. These are the same coils used in the Vaporesso Sky Solo Plus, and NRG PE tank that comes with the Swag II kit. Vaporesso seem to be streamlining their tanks to use the same type of coils, and that’s great for future coil availability. If many tanks use the same coils then it’s more likely that your local vape shop or online retailers will keep them in stock.

These coils screw into the base of the NRG-S, and then thread into the chimney. Both of these coils are mid-high wattage coils, as are the rest of the GT line of coils.

I was also sent a pack of 0.20ohm GT6 clapton mesh coils to test out. I’ll start with the similarities between these three coils and that’s airflow. These are all quite airy coils but they can be restricted down to a slightly restricted lung hit by cutting the airflow control down. The 0.18ohm single mesh coil is the most airy, while the 0.20ohm GT6 mesh coil and 0.15ohm dual mesh coils are slightly more restricted.

The 0.18ohm single mesh comes preinstalled in the NRG-S. This is a surprisingly flavorful coil for a single mesh coil and pleasantly surprised me. At 50W the vapor is cool. Increasing the wattage increases the warmth as well as the flavor. This coil is rated up to 85W but I like it at 77W. Flavorful, warm, and cloudy is the most accurate way to describe this coil.

Even better is the 0.15ohm coil dual mesh coil. It’s very good at 70W with even better flavor recreation than the 0.18ohm coil. Any less than 70W feels underwhelming, so I would suggest staying above this wattage when using this coil. Cloud production is about the same, as is the warmth. Using complex ejuices in this coil really brings all the notes out.

I saved the best for last, but unfortunately this coil doesn’t come included with the NRG-S. The 0.20ohm coil uses clapton mesh and oh boy does this make a performance difference. This is a triple mesh coil so I expected the flavor would be better, I just didn’t expect it to be this much better. Flavor is excellent at 90W with very warm vapor and huge plumes of vapor. This coil is rated up to 100W but I find it a little too warm at this wattage. Flavor is actually better though so if you prefer a hot vape, 100W is for you.

All three of these coils kept up with 80VG ejuices and had no wicking issues. This is likely due to the large wicking ports on the outside of the coils. The tank didn’t leak either so I’m happy about that as well. I’m quite happy with these coils. If Vaporesso continues using them in other tanks, I for one will not complain.

Specifically speaking about the GEN S mod, performance is exactly the same as the original Gen. It’s a great mod to vape with. Pulse mode is a slight difference from normal wattage mode; I feel like the vapor is smoother but this could all be in my head. Otherwise, the GEN fires almost instantly and delivers quick and steady power.

To test out the TC mode I used the GEN S with my Dead Rabbit V2 RDA and a pair of clapton coils that came out to 0.24ohm. Temperature Control mode works well but I used SS Temperature Control mode, the one found in DIY, and not the “Smart TC” mode. The GEN S adjusts power accordingly and doesn’t cut off power too quickly. TC Performance is definitely better than average, but still behind DNA or Yihi chips.

The Gen S isn’t much different from the original Gen. It’s essentially the same mod but with new color options and an upgraded screen. That being said, it’s an amazing mod. It’s lightweight, packed with modes, and delivers great wattage mode and TC performance. If you don’t have a Gen already, this mod is definitely worth getting. On the other hand, if you’re already the proud owner of the original Gen, the Gen S isn’t different enough to be worth getting.

The NRG-S is surprisingly good for a tank that comes as part of a kit. I can even see this tank becoming very popular if Vaporesso increases its standalone availability. The coil options and flavor make it an attractive choice for a subohm tank. If you’re considering getting the Gen S, I highly suggest grabbing the kit and a pack of 0.20ohm GT clapton coils. The NRG-S definitely won’t leave you disappointed.