Glamee Dice Disposable Review: Should You Roll The Dice? 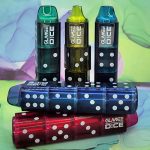 The Glamee device is not exactly the perfect disposable. There are some flaws in the overall toy-like design but I don’t think that this should take away from all of the other pros that come with the device. The design might attract the wrong sort of attention, that’s for sure, however, the Glamee Dice is a good device overall and it deserves the credit.

The Glamee Dice outputs up to 25W which is very strong for a disposable device. Each one comes prefilled with 20ml of ejuice which will get you up to 6000 puffs. Plus, the 800mAh battery is rechargeable and allows for pass-thru charging so you can use the device even while it’s charging.

If you have fidgety hands and can look past the fact that this device looks like a toy, there are a lot of pros to the Glamee Dice and the overall performance is worth the purchase.

Glamee entered the vape universe just a few years ago, so they are a little new and you may not have heard of them yet. Their main focus is manufacturing disposable devices. They offer a wide selection of disposable devices that vary in puff count, nicotine strength and battery size.

The Dice is one of the larger devices sold by Glamee and definitely one of their most eye-catching. The Dice is exactly that, a disposable device encased in a stack of four dice designed cubes.

Each one comes filled with 20ml of ejuice for up to 6000 puffs and are available in 5% (50mg) nicotine strength. Each one comes with a built-in rechargeable 800mAh battery.

The absolute best thing about the Glamee Dice is that it fires at up to 25W. This may not seem like that big of a deal but when you think of the fact that most disposables only fire between 7-15W, it is a huge jump in power.

I’m going to break down the Glamee Dice for you, the good, the bad and the ugly. Then you can decide for yourself if you should roll the dice and pick one up.

The Glamee Dice is one of the more interesting devices I have used to date. It was totally not what I was expecting when I first opened it up. And when I say it’s not for everyone, I mean it. The design is way out there and not discreet at all but it’s not all cons.

If you are a person who has fidgety hands then I think this could be a fun device for you. The Glamee Dice’s body is made of four stacked dice-styled blocks (that’s a mouthful, I know) that individually and independently twist 360 degrees. This, paired with the brightly colored clear plastic, makes them even more wild.

As fun as this device is, I just think it’s important that we don’t cross a line and make vapes look like children’s toys.

Unfortunately, this is the case with the Glamee Dice. It seriously looks like a children’s toy and is just not the look manufacturers should be going for when it comes to vaping. However, the Dice does have a lot of pros too so let’s break this device down.

The Glamee Dice is a cube-like device that comes in five different colors and it’s made entirely of a shiny clear plastic. The entire device has a flat finish which scratches pretty easily, but thankfully the scratches aren’t visible unless you’re looking for them. The mouthpiece is made of the same material as the body and it’s the same color as well. The duck-bill shape of the mouthpiece makes it very comfortable to use.

These devices are on the larger side of disposables that I have used. Each one is 120mm tall, 23mm wide and 23mm thick. The square shape is actually quite comfortable to hold as the sides are smoothed out. It also fits in the palm of my hand quite comfortably as well. I can’t say the same about my pockets though. I found that they’re a little too large for my jeans pockets and so I preferred to keep it in my bag or jacket pocket instead.

Like I stated previously, the entire body of the Glamee Dice is made up of four dice blocks. Each block can move on its own independently and is made of a colored plastic with white dots, just like a dice. Some of the sides have 1 dot, some have 2, some have 3, etc. I had no issues with any of the dots wearing off, scuffing or scratching.

The highest stacked dice, just below the mouthpiece, has the Glamee and Dice logo vertically printed in the same white color as the dice. On the back of that same top dice is an icon that corresponds to the flavor, with ‘6000 puffs’ printed below.

On the bottom of the Glamee Dice you will find the Type C charging port. These devices also offer pass-thru charging, so no need for a backup device.

The LED light is also located on the bottom of the device and will light up blue while you take a draw on the device or while it’s charging. The light is rather bright, but you can cover it if you wish. However, covering it up with your finger will make the draw a little tighter. 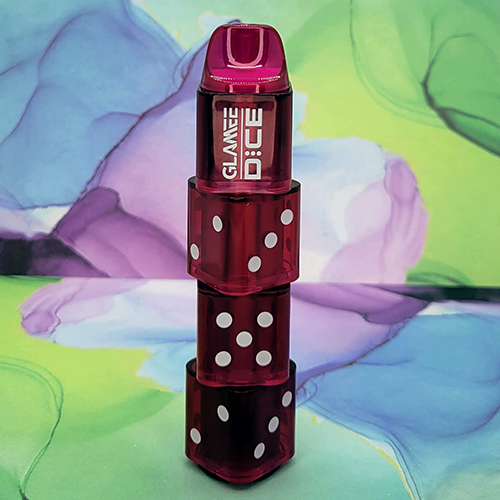 The Glamee Dice is a super powerful disposable vape that delivers up to 25W on a full battery. As most disposable devices usually output between 7-15W of power, a 25W disposable is a huge jump. You can absolutely feel the power with each draw. I also found that the draw didn’t really drop that much until the battery was at about 25%, so that’s pretty good in my opinion.

Each one comes prefilled with a whopping 20ml of ejuice for up to 6000 puffs and these are available in 5% (50mg) nicotine salt strength. Each one has a 800mAh battery that is rechargeable, allowing you to vape every last bit of ejuice before having to toss it.

Glamee has marketed this device as a RDL device but I found it to be more of a MTL device. I did find the draw to be very pleasant though. Unfortunately, there is no airflow adjustment, so there is no way to adjust it to your liking.

The other feature is that the dice can be used as a stress reliever for those with fidgety hands, but as I mentioned earlier, the con to this is that it can also appeal to kids. 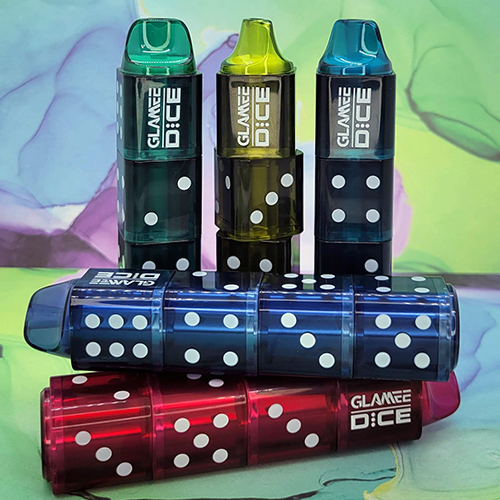 The Glamee Dice comes in 10 flavors according to their website, however I received a flavor that is not listed on their website so there may actually be more. They have quite a wide selection of flavors and mixes, while also offering some mint and iced versions. Most of the flavors are fruit flavored, but there is also a single candy flavored option and a couple of mint options which nicely round out the flavor selection. The flavors available are:

This blackcurrant flavor is super strong and very natural. The flavor is not candied at all, which I am a big fan of. It’s also not too sweet, but just sweet enough. This was a strong contender for my favorite flavor.

This is one of my favorite flavors of the line. It’s so sweet and reminds me of summer. The strong flavors all blast off in your mouth immediately. One right after another. You get blueberry, then raspberry, then the lemon finally tops it off. I find the lemon seems to linger on the tongue a little longer than the other flavors.

This is one minty flavor. Very strong but also super refreshing. This one hits the throat on a whole new level. If you are a mint lover, this is the one for you.

I was safe to assume this is a skittles flavor, because it is. I have to say that the sweeter side of this one makes it one of the best skittles flavored disposables I have tried.

This blueberry flavor in this one is the leader of the pack and makes its presence known. I’m not 100% what the ambrosia flavor is supposed to taste like as I have never had an ambrosia flavored disposable before, but there’s a subtle flavor that adds a sweetness to the mix here too. Quite good. 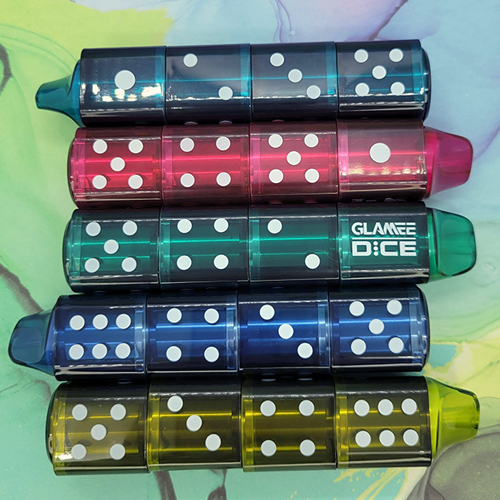 These devices are powerful. With each device packing 50mg of nicotine and each draw reaching up to 25W, you’re going to want to be cautious. If you’re someone who strictly vapes disposables, keep in mind that these are going to be a step up from the rest as they more closely replicate the draw from a pod device rather than a disposable.

I mentioned earlier that you don’t really notice that much of a drop off in power until it is closer to being dead. That could be thanks to the highest wattage being 25W rather than 15W in most disposables. Therefore you get a longer time vaping with a higher wattage and this still gives a rather satisfying draw until it’s time to charge.

I really enjoyed using the blueberry raspberry lemon and had to recharge the device numerous times. I’m happy to report that there was no drop in flavor even after all of the recharging and use that I put the device through.

The Glamee device is not exactly the perfect disposable. There are some flaws in the overall toy-like design but I don’t think that this should take away from all of the other pros that come with the device. The design might attract the wrong sort of attention, that’s for sure, however, the Glamee Dice is a good device overall and it deserves the credit.

The Glamee Dice outputs up to 25W which is very strong for a disposable device. Each one comes prefilled with 20ml of ejuice which will get you up to 6000 puffs. Plus, the 800mAh battery is rechargeable and allows for pass-thru charging so you can use the device even while it’s charging.

If you have fidgety hands and can look past the fact that this device looks like a toy, there are a lot of pros to the Glamee Dice and the overall performance is worth the purchase.