Kizoku Unlimit RTA Review: The DL Version of The Limit 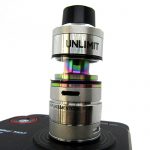 The Kizoku Unlimit RTA is a very interesting tank. You have a dual postless deck for installing DIY coils or you can take out the build deck and chimney and screw in a sub ohm coil instead.

Kizoku have previously released the Limit MTL RTA which also had the option of using stock coils.

So let’s take a look at the Unlimit RTA.

Starting at the top of the Unlimit, there is an 810 drip tip, which is comfortable to use. Removing the drip tip, there is an o-ring in the top cap, so you can use your own drip tips, even if they don’t have o-rings on them.

The top cap has a very fine cross cross pattern engraved on it all the way around, but it offers little in the way of grip when unscrewing the top cap.

Removing the top cap reveals two large kidney shaped juice fill holes, which are set in a recessed trough, allowing you to fill without worry of over spilling. The fill holes are located on a section of tank above the glass and you can also add the tank extension piece onto the top of this section which increases the tanks capacity and height.

The extension piece has three lines engraved all the way around for decoration and the standard piece has the Unlimit name on one side and the Kizoku logo on the other.

Next you have the glass section which you can either have as the straight glass or the included bubble glass.

Within the tank is the chimney section, which is removable when using the tank in sub ohm stock coil mode.

Below the glass section is the side airflow ring. It has hard stops when fully open and fully closed. It features the same cross cross knurling as the top cap, which again offers little grip when adjusting the side airflow. The airflow ring itself has a nice tolerance to it.

Below the middle airflow ring is a section which features a ring that lifts up to quickly release the bottom cap and build deck. It’s simple to use and does a good job, acting as a juice flow cut off when the bottom deck is removed, but I have found that juice still sleeps through if you stand the tank up with the bottom deck removed. Still, it does offer quick and easy access to the build deck, removing the need for unscrewing.

The bottom of the tank has a fixed 510 connection pin and the usual safety and regulation logos, along with the Kizoku name and a serial number.

Converting from rebuildable to sub ohm stock coil mode is straight forward enough. You release the base section, unscrew the build deck, screw a coil into the base section, take out the chimney section and put it back together.

Overall, the build quality is good. Machining and threads are all nice and the tank feels well built and sturdy.

Design wise, I think the idea of the tank is great. However, I feel aesthetically it could have been refined a little. Especially with the bubble glass installed and the extension piece added, to me the whole tank looks like it has been built using separate pieces from different tanks. 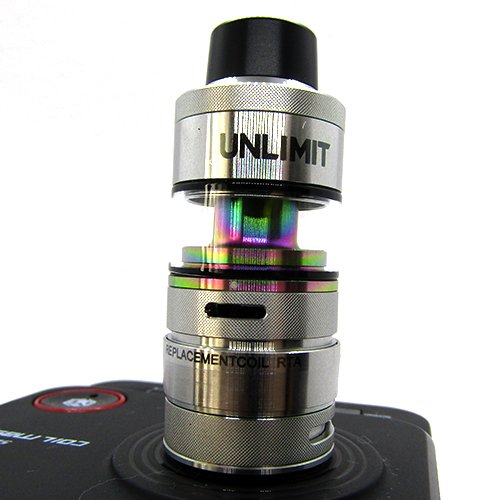 The airflow options available in rebuildable mode are quite extensive. Firstly you have the side airflow, which is controlled with the airflow control ring just below the glass of the tank.

The airflow is a dual cyclops style on either side of the tank.

You also have the option of installing the bottom airflow reducer into the build deck. It’s a simple plug that pushes into the middle of the build deck, before you install your coils.

There is plenty to tweak to find your preferred airflow here.

You can get whistling from the bottom ring in some positions, but overall the airflow is smooth.

Building on the Unlimit RTA

The build deck is a dual postless deck and very simple to install a build into.

Unscrewing the four grub screws, two on each side, will open the holes for you coil legs. You will need to pre trim your coil legs, then drop the coils into place, tighten the screws, and fine tune your coil positioning.

Dry burn your coils and work out any hot spots, then let your coils cool down before inserting your wicks.

One side note is that with the bottom airflow reducer inserted into the build deck, you will need to be mindful of your coil height; don’t go too low or your coils will touch the reducer as it protrudes from the build deck. 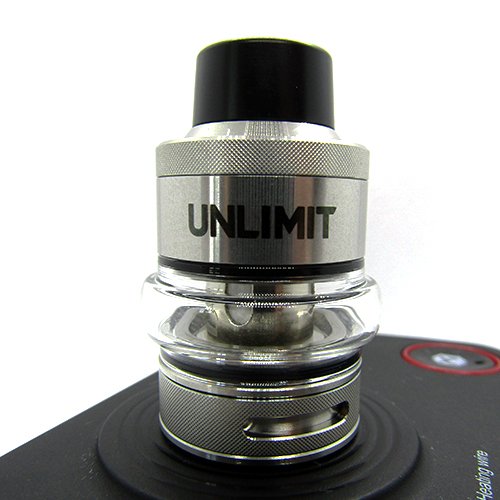 I thought I’d try the included sub ohm coil first, before setting up a build on the Unlimit. The included coil is a 0.15ohm single mesh coil rated for use between 70-80W. I primed the coil and left it sit in a tank full of liquid for a good 5 minutes to ensure the cotton was fully saturated before starting the vape.

I’m going to cut to the chase and say I was very underwhelmed by the included coil. Regardless of what wattage I vaped it at and what airflow options I used, I found the flavor to be very average. It’s not awful, but there are way better options available from other sub ohm coils and even pod systems.

After a few days of giving it a chance I decided to move on to the rebuildable deck. I used the included DIY coils, which it doesn’t give you the specifications for; they look like fused claptons and ohm out at 0.18.

The flavor and cloud production is good in rebuildable mode. You also have the choice of reducing the diameter of the bottom airflow using the included plug which pushes into the build deck.

I settled on having the airflow reducer installed and then having the bottom airflow halfway open, while having the side airflow about a quarter open. Regardless of how you like your airflow there are lots of options for fine tuning it here.

The Unlimit RTA is a versatile tank which has some really great ideas. I have some niggles with it, but they’re not deal breakers.

First is that the included sub ohm coil didn’t give a good performance. Nothing terrible, but nothing great either. It also leaked out of the bottom airflow quite a bit.

The bonus is that you can use Falcon coils in the tank, so you should get a much better performance using those instead.

Another niggle is that the different pieces of the tank all look different, so when you put it all together in rebuildable mode it almost looks like you’ve stuck different tanks together and created your own beautiful monster. It’s not ugly by any means, but to me it just seems a bit odd looking.

My biggest complaint is the knurling on the top cap offers very little grip. Where this became a problem for me was instead of unscrewing the top cap to fill, I always ended up with the extension part unscrewing with the top cap stuck to it, which meant I couldn’t fill the tank to the full capacity so it was pointless having it on anyway.

I did experience some slight leaking in rebuildable mode too. Not because of wicking issues / flooding the deck, more a build up of condensation that would seep out of both the side airflow ring and bottom airflow ring.

In rebuildable mode I think the tank performs at a good level, but there are better options out there in my opinion.