Uwell Caliburn Review: Is It Still Worth The Purchase? 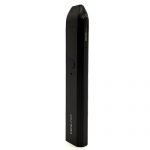 In the past year alone, there have been hundreds of new pod vapes released. All of them have been striving to deliver the best flavor possible from a pod system. Some of them are great, but some of them are just downright terrible.

Throughout all these new pod vape releases, one device has remained talked about as the ‘pod vape to get’ — the Uwell Caliburn. The Caliburn has been out for a while but it’s still in high demand due to its great build quality and the flavor that it delivers.

The Uwell Caliburn has a 520mAh battery and a 2ml capacity pod. The pods use Uwell’s proprietary Pro-FOCS flavor technology which is said to enhance flavor and provide a more pleasant draw.

Having been out for so long, is Uwell’s Caliburn still worth picking up? Or are you better off with a new device? Read on to find out! 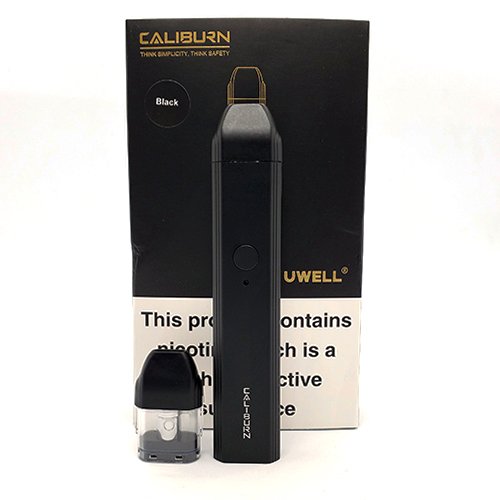 A big reason why people love the Caliburn so much is the design. It looks simple but cool, and it’s nice to hold and vape with. The dimensions of the Caliburn come in at 110mm x 21mm x 12mm. It’s tall and slim so holding on to it from the bottom and vaping on it is really comfortable and natural. You can throw it into your pants pockets or even a shirt pocket and you barely notice that it’s there.

The Caliburn is made of aluminum-alloy and as a result, it’s a very light device. It’s still quite sturdy and durable though. Because the device is almost completely smooth, I’ve dropped it from standing height a few times onto hardwood floors and concrete. Other than a few minor scratches and dings it’s still looking and working fine.

You can get the Caliburn in six different colors. Five of them are solid colors and one of them fades from pink to purple to blue. The paint on my black review unit has held up well, other than a few scratches and dings from dropping it. It doesn’t scratch easily, nor does the paint doesn’t rub or flake off easily. However, the very bottom edges of my Caliburn have some paint coming off from being stood up on all types of different surfaces.

You can either press the power/fire button to vape or just draw on the mouthpiece. The Caliburn has both button activated and draw activated firing so you can use whichever you like. The fire button is well made and takes some pressure to activate. It doesn’t move or wiggle at all.

Just under the power/fire button is an LED indicator. This lights up green, blue, or red to indicate the battery level. The LED will light up whenever you take a draw or press the fire button.

On each side of the device is a little cutout for the ejuice viewing window on the pod. When the pod is inserted the window sits in this cutout so you can check your ejuice level without having to remove it. The window is completely clear so it’s very convenient and easy to see into.

Caliburn pods hold up to 2ml of ejuice. You get two identical pods in the box which have built-in 1.4ohm coils. These pods are replaceable which means that you can’t change the coils. Once the pods are used/burned out you have to replace the entire pod. This is convenient for those who just want a simple device that they can fill and start using.

You can also use Caliburn Koko pods with the Caliburn. Those pods are 1.2ohm and have a red base (the base on the standard Caliburn pod is black).

Airflow is fed into the pod through small airflow holes on the sides of the Caliburn. This airflow then goes in through a hole on the bottom of the pod.

Once you get the cap off you’ll see three holes. The middle hole is not a fill hole so don’t put ejuice in here or you’ll flood the coil! You can fill the pod using either of the outer holes. When you fill through one hole, the other hole allows air to escape to make filling it easier.

Even with the air release hole, you have to fill the pods slowly. Because the coil is in the middle of the pod, ejuice doesn’t distribute evenly unless you tilt the pod. Tilting the pod will get the ejuice to go to the opposite side. If you fill too fast, ejuice will fill up just the side of the hole you’re using and then come out the hole.  When you’re done filling the mouthpiece/cap pressure fits back onto the pod. 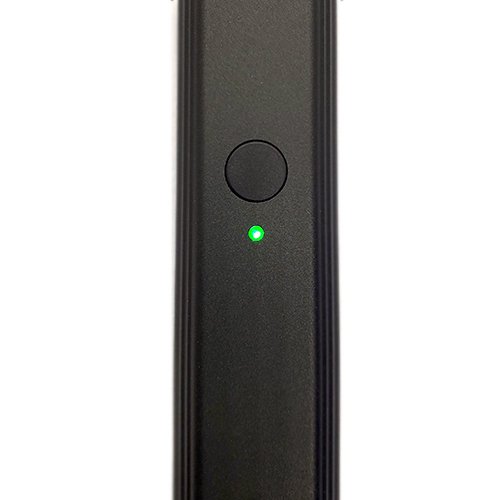 The Caliburn has a 520mAh battery. Fully charged, the Caliburn lasts for quite a bit of vaping. It only outputs 11W so it uses very little battery for each draw. On average I’ve been getting about 3 refills per charge.

The LED underneath the power button indicates your battery charge level. There are three colors:

You can press the fire button once to check your battery level or when you puff with draw activation it will also light up the LED.

Charging is quick even though the Caliburn uses micro-USB charging. It takes just 45 minutes to go from dead to fully charged. It also has pass-thru charging so it can be vaped on while it charges. 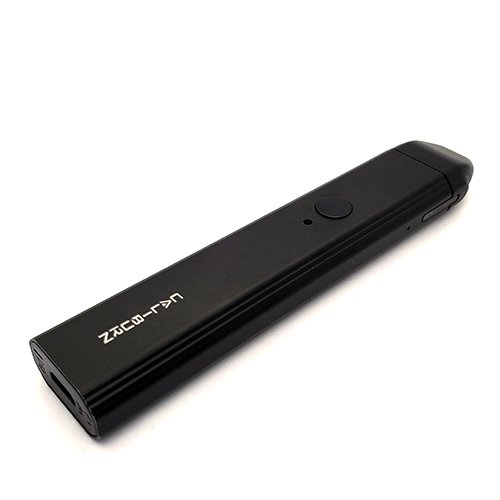 The Caliburn is a solid vape. The included pods and the Caliburn Koko pods both give the same draw; a loose but not airy MTL draw. If you like a tight MTL draw then this might not be the device for you.

The standard 1.4ohm Caliburn pods deliver a nice throat hit with a 50mg nic salt. The vapor is warm but not hot and very enjoyable. The flavor is really nice and lives up to all the hype that is out there. The vapor production is more than you would expect for an 11W device.

Caliburn Koko pods deliver a very similar experience to the standard pods. However, because they’re 1.2ohm pods, the vapor is slightly warmer. It’s still not hot, but noticeably warmer than the standard pod. Flavor and cloud production are similarly good and nice.

Vapor production, flavor, and warmth all start to drop off as the battery dies. The Caliburn isn’t a constant output device so this is to be expected. Once the battery gets to red it’s a much weaker draw so I tended to charge it once it got to this level.

None of the pods leaked or gave me any issues during my testing. I used mostly 50/50 nic salts but I did use a 60VG ejuice once. I regularly took long draws and chain vaped and never had a dry hit or even close. Wicking on the pods is really good and a non-issue.

I’ve used each pod for about a week now and through multiple refills a day and they’re still going strong. Pod life is definitely a strong point of this system.

The Caliburn has a few areas that could be improved but it’s generally a solid vape. If you’re after a tight MTL draw then you’ll want to look at another device. But for a loose MTL draw, you’ll definitely be happy with the Caliburn.

Beginner vapers will love the ease of use, while more experienced vapers will still appreciate the flavor and long battery life that the Caliburn offers. For a nic salt vape, the Caliburn is definitely among the best devices you can get, even today.

The Caliburn is well made, the pods last a long time, and the flavor is on point. I can easily still recommend the Caliburn, even with all of the newer options available.