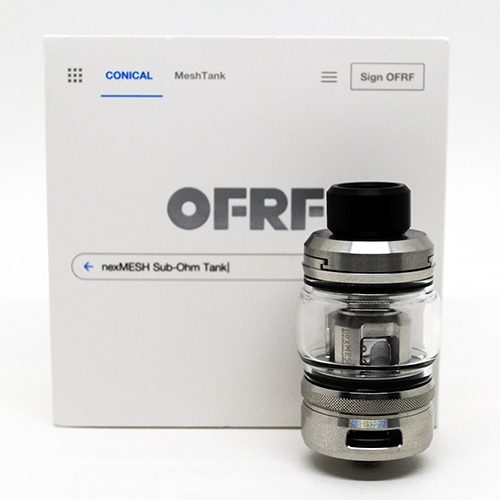 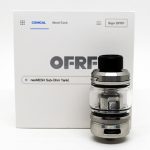 The nexMesh sub-ohm tank is produced by OFRF, a company known for their excellent mesh coils. This tank incorporates their mesh into a sub-ohm coil with a unique conical structure that is supposed to provide faster ramp-up times and thicker vapor due to the inward portion of the coil being slightly tilted inwards. Theoretically, you should get the same great flavor and wicking properties that their mesh is known for, but with the convenience of a refillable tank.

You get two different coils with the nexMesh tank and both feature this thick conical mesh. The coils also incorporate both an inner and outer layer of cotton to prevent dry hits and provide better wicking. The nexMesh is available in six different colors, features a silicone guarded fill port and has a maximum capacity of 5.5ml. It also uses a PCTG tube for a shock-resistant, nearly unbreakable tank.

This tank has received high praise from multiple reviewers, some of them going so far as calling it the best vape tank of 2019. Today I’m going to find out if it really lives up to the hype. 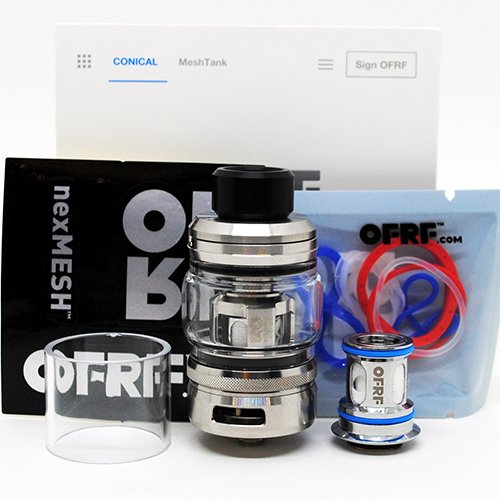 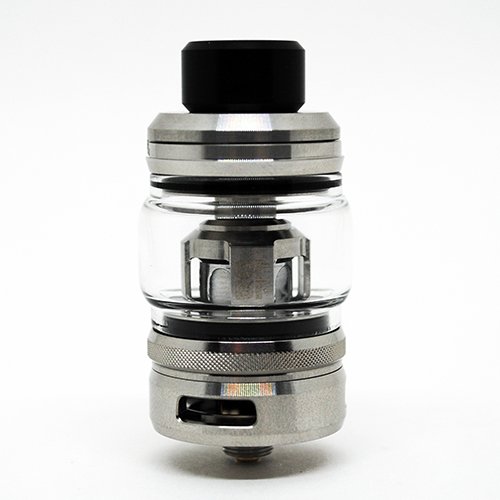 The nexMESH has a 25mm base diameter and stands roughly 40.5mm tall without the drip tip. It’s an average sized tank; it’s not too large but it’s not tiny either. With the bubble glass installed it looks perfect atop the Aegis Legend.

All of the tanks components are slightly beveled and this gives the nexMESH a clean look. Even the drip tip is beveled at the top and bottom. The stainless steel color that I received is not very shiny but is instead more plain and neutral. It’s a very nice and neat looking tank that isn’t overly styled.

In addition to the beveling, there is some cross stitching at the base of the tank just above the airflow control ring. But that’s the most styling that there is on this tank. OFRF is written on the chimney on the inside of the glass.

This chimney gets very narrow at the very top to further condense and concentrate the vapor. In combination with the conical coils this is supposed to make the vapor more flavorful.

Build quality isn’t an issue here. It’s a well-machined tank and all of the parts fit together nicely. The threading to remove the tank from the airflow ring is also smooth and catches easily. The fill port is a little snug and was difficult to open at first, but this got easier with time. 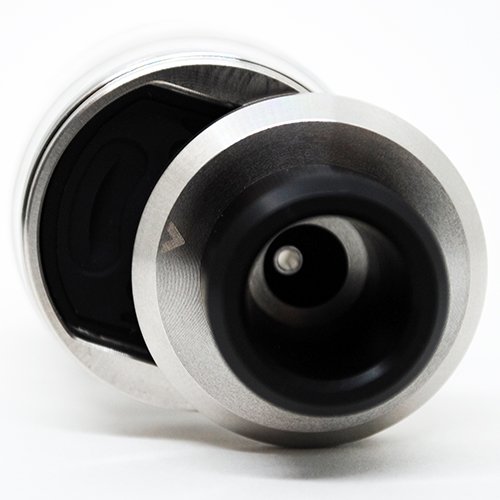 There’s a little arrow on the top cap and this signals where you have to push to access the fill port. The top cap just slides back. The fill port is covered by a silicone guard to prevent leaking and there’s a little slit to insert your bottle nozzle or dropper.

The nexMESH includes two glass tank sections: a straight PCTG section with a 4ml capacity and a 5.5ml bubble glass section. The PCTG section is super durable and can withstand some pretty serious impacts without breaking. I’ve dropped the tank while attached to my Aegis Legend a few times from standing height and it’s survived unscatched each time. Keep in mind that the bubble glass is not PCTG and will break just as easily as any other regular glass. Try not to drop the bubble glass.

I like the design of this tank. What I like even more though is that it doesn’t leak. Not from the top cap and not from the airflow. Even after using the same coil for nearly two weeks, the nexMESH still did not leak a drop of ejuice.

The airflow control ring is similar to the top cap as it’s a little difficult to turn at first. But over time it loosens up to an acceptable resistance. It will stay wherever you put it and won’t turn without you intentionally trying to change it. A slight issue with the airflow control ring is that it’s completely smooth and there aren’t any indentations or grooves to grip. This makes it difficult to adjust if you get ejuice on your fingers.

There are three airflow slots that can be adjusted as you wish or even closed all the way. With the airflow open you get a very airy DTL draw. It’s enjoyable but it wasn’t exactly for me. With the airflow mid to almost fully closed you get a much more restricted direct lung draw that is much more pleasant and slightly more flavorful.

The airflow is smooth and there’s no whistling even with the airflow is restricted. It is a little loud though. It’s not obnoxiously loud but I would have preferred it to be a little quieter. 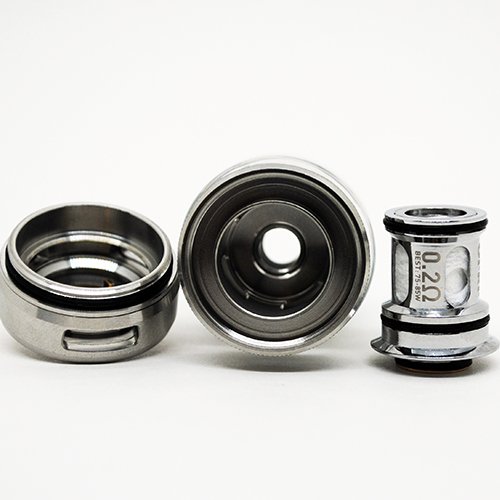 Changing the coil is simple and is very similar to the Crown IV. Unscrew the base of the tank from the airflow control ring and pull the coil out — no unscrewing needed. Push in your new coil and you’re all set (don’t forget to prime it first).

The coil sits in a cage of sorts with four open slots to allow wicking. It’s a great design because it allows your juice to flow evenly to the coil while still allowing the vapor to condense at the top of the chimney.

The nexMESH comes with two coils:

Both of these coils are “conical” which simply means that they’re slightly more narrow at the top and wider at the bottom; they’re shaped like a funnel turned upside down. The tapering is very slight and barely noticeable when you’re looking down the coil but it’s definitely there.

OFRF say that this shape is supposed to provide faster ramp up times and better airflow, which in turn should provide better flavor. Supposedly, air will hit the bottom of the coil and condense as it makes its way up to the smaller top portion of the coil. This, in combination with the narrow chimney, concentrates the vapor for a smoother, more flavorful hit.

In addition to the conical shape, the coils use a “Twin absorption wicking system” which is a fancy way of saying that they have two layers of cotton. There’s an inside layer and an outside layer. This should allow for better and more even wicking without the chance of dry hits. 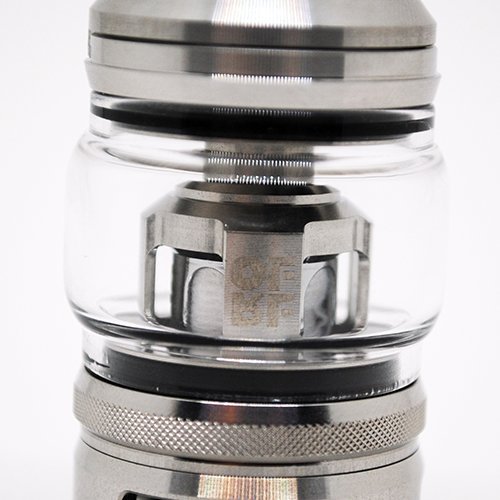 The nexMESH is OFRF’s first attempt at a sub-ohm tank. But if you didn’t know that before you vaped on it, you would think that they’ve been making them forever. The flavor from both of these coils is amazing and they live up to all of the hype that I’ve been hearing. Once you get through half of a tank with either of these coils you’ll know exactly what I mean.

The Kanthal A1 0.20ohm coil was the one that I started with. It took a half tank of ejuice before the flavor really started to come through but once it did, I couldn’t believe how good it was. The flavor is extremely accurate and the vapor production is off the charts. Vaping at 80 watts was the sweet spot and this coil brought out all the subtle and more nuanced flavors in my ejuice without any spitback or popping. It’s as close to a perfect vape as you can get from a sub-ohm tank.

Now I was already sold on this tank after using the first coil. However, the SS316L coil is even better! 75W seemed to also be the optimal wattage for this coil as well but it worked just as great at 450F in temperature control mode. There’s slightly better flavor recreation than with the kanthal coil and it vapes just as smoothly. The SS316L quickly became my preferred coil out of the two.

Another really positive quality of this tank: it doesn’t leak. I thought that the push in coils might cause a problem but thankfully the nexMESH hasn’t leaked on me at all. I removed the airflow cap a couple of times to check inside and aside from some condensation, there was no ejuice to be seen. The silicone guard on the fill port does its job too and it’s stayed completely dry around the top cap as well.

Worth noting is that these coils go through juice crazy fast, probably due to the double cotton and thick mesh. Although, the dual layers of cotton are a prime reason why they wick so well. Taking multiple, long draws one after another is no problem and I didn’t have any dry hits whatsoever. So for all you chain vapers out there: this tank will keep up and will suit you perfectly. 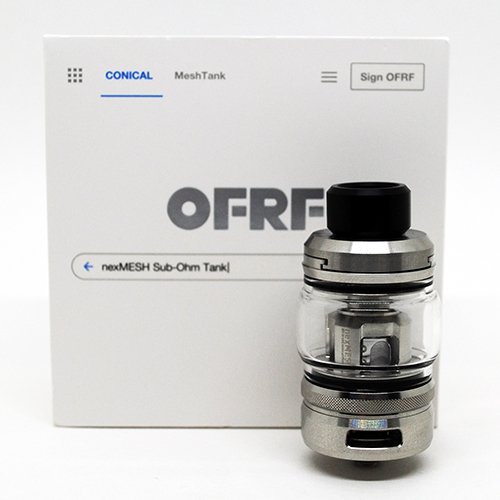 After trying this tank for myself, I can truly see what all the talk is about. The nexMESH is an extremely flavorful tank and it works without a fuss. The design is a little simple but it still looks elegant and modern thanks to the tapering and cross stitching.

The conical coils are a true game changer for taste and vapor production — so much so that it’s going to be hard for me to use any other tank. The SS316L coil is the better of the two coils — if only by a hair. The flavor and vapor are just slightly more accurate and pleasant.

It also wicks crazy efficiently, but keep in mind that it’s a thirsty tank that can really guzzle ejuice. That’s the trade-off here for top of the line performance though. The nexMESH sub-ohm tank really gives other vape tanks a run for their money and I think it might just be the new best tank on the block.

What do you think about the nexMESH sub-ohm tank? Drop a comment and let me know.