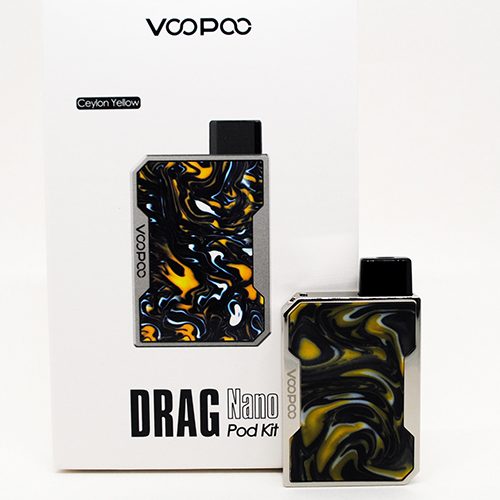 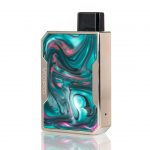 Voopoo have been dominating the box mod game for a long time now. The Drag and Drag 2 are still two of the best box mods you can get and now Voopoo are trying their hand at the pod vape market. The Drag Nano is basically a miniaturized version of the Drag without the screen or the buttons. It’s a super small pod vape built with the same high-quality materials and craftsmanship as the rest of Voopoo’s devices and it’s got a gorgeous design to boot.

The Drag Nano uses the all new Gene.Pod chip, comes with a single 1ml pod and has a 750mAh battery capacity. Like other pod vapes, the Drag Nano is meant to be used with nicotine salts and delivers a super tight draw. However, it’s more of restricted lung hit rather than a true MTL draw but I’ll get into this a little later. 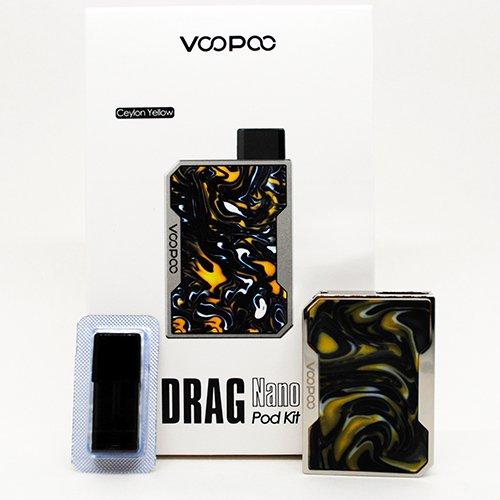 It’s called the Drag Nano for a reason! It weighs a mere 55g which is feathery light. Plus, at 54.5mm by 35mm by 11mm it’s super small, even by pod vape standards. You can easily put this device in your pocket or bag and you won’t even notice that it’s there.

It’s easy to palm and it feels good in your hand. It’s a very solid and well constructed vape, as you would expect from Voopoo, and there are no design or build quality defects. It’s definitely one of the nicest looking pod vapes on the market, hands-down. Plus, the device is draw-activated so there are no buttons and this gives the Drag Nano a nice, clean appearance.

I received the Ceylon Yellow color and the resin is absolutely gorgeous. It’s just as beautiful as the resin on the Drag box mods and it feels nice to the touch. The back of the device is a shiny polished metal with the familiar Drag logo that we all know and love.

It’s a real fingerprint magnet though. There’s no way to keep it clean because the second you touch the metal you’ll have your fingerprints all over it. Although, the design is so nice that I think I can live with this one.

At the top of the mod is an anchor spot for a lanyard. If you’re lucky enough to get the chain included (I did not), you can attach it so that you don’t lose your Drag Nano. Seeing as the device is so small, it’s probably a good idea to do so.

There’s a micro-USB port on the bottom of the device. I wish it would have been USB-C for faster charging but what can you do. GENE CHIP is written next to the charging port in raised lettering, just in case you forgot what was powering this baby.

You only get one pod with the Drag Nano which is pretty strange. I would expect any pod vape to come with at least two pods. My suggestion is to pick up a replacement pack when you buy the device so that you’re not stuck.

The pod slips into the top of the Nano and is held in place by magnets. It’s a good fit and the pod won’t come out on its own. There’s still a little bit of wiggle though and this makes it feel less secure than it really is.

The pods only hold 1ml of ejuice which is definitely on the small side. But because of the low wattage output, a single fill still lasted me a while.

It’s a side filled port and it’s really quite small. Some dropper nozzles fit while some didn’t. For the ones that don’t fit you have to be very careful not to make a mess. Slow and steady is the name of the game here. 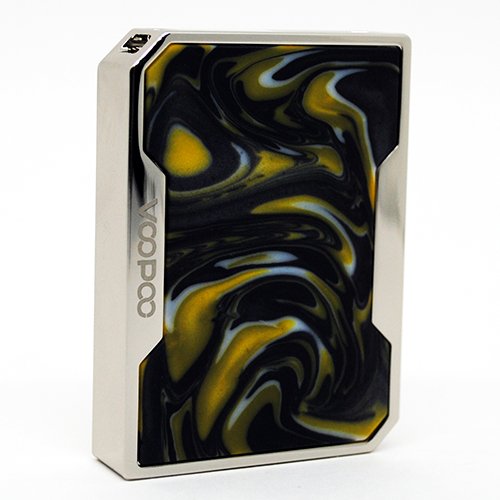 Although small in size, the Drag Nano packs a decent 750mAh battery. This is enough to get you through a day of medium usage, especially if you top it up during the day.

There’s a small LED indicator on the side of the device to let you know the battery level. There are three colors:

Overall, the battery life is decent. I got through about refill and a half before I had to charge. From dead, it took me about an hour to charge the device back to full. 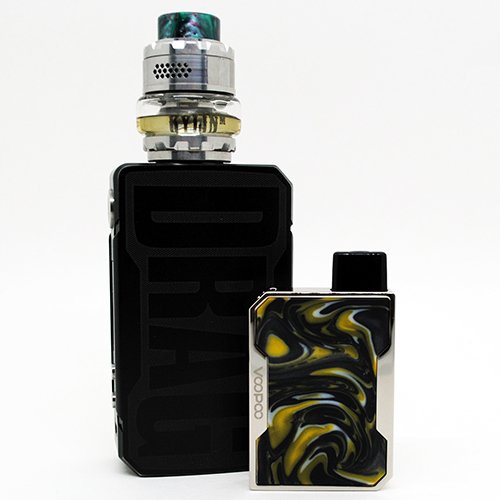 The Drag Nano is a pretty good pod vape. The first refill didn’t deliver the best flavor but once I broke in the pod it was a completely different story.

I used regular 6mg, 80vg/20pg ejuice as well as a 30mg nic salt. Both vaped without a problem and wicked well. The vapor is a little cooler than I would have liked but not a huge deal. The throat hit could also be a little more pronounced. It’s decent but just not as strong as I expected.

My first fill delivered average flavor. However, after 3 refills is where the flavor really started to shine. After breaking the pods in, I think that the Drag Nano is up there with the best of them for flavor. It’s not quite up to par with the Smok Nord or Breeze 2 but it certainly comes close.

The draw on the Drag Nano is a little strange. You have to really pull with your lungs rather than just with your mouth. It’s a very tight draw that requires a bit of effort to work. Because of this I wouldn’t call the Nano a true MTL vape. Instead, a super restricted lung hit would be a more accurate description. 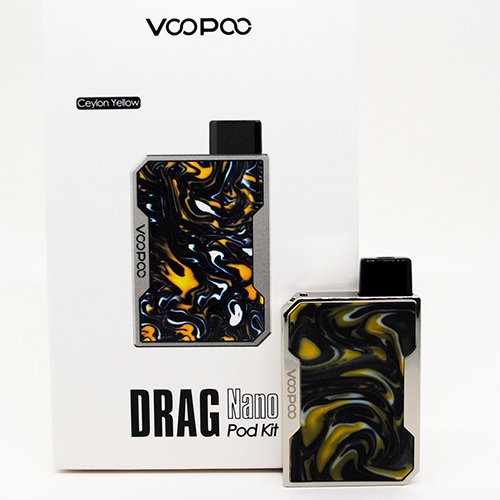 The Nano is another great device from Voopoo. The design and build quality are the highlights of this mod; it’s got one of the nicest designs and form factors out there. Plus, it’s super small and light.

The Drag Nano delivers a really tight and restricted direct lung hit, however I wouldn’t call it MTL because you have to really pull with your lungs. The flavor is great, although the throat hit could be a little more pronounced. If you’re looking for a well-designed, ultra-portable pod vape, the Drag Nano is a great choice.