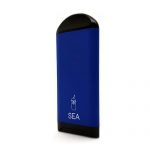 Sea Air disposables are ultra-slim disposable vapes made by SEA. SEA makes a couple of different products and all of them are disposables. I recently reviewed their Sea Stix disposables and I thought that they were really good; they gave a good throat hit, the flavors were interesting and tasty, and they worked without any issues.

SEA’s Sea Air disposables are like an upgraded version of Sea Stix. They come prefilled with 2.6ml of 5% nic salts, more than double the capacity of the Sea Stix, and they’re much slimmer, smaller, and lighter.

There are already a ton of disposable vapes on the market. Do we really need another one? I’ll answer that question and more in this review. 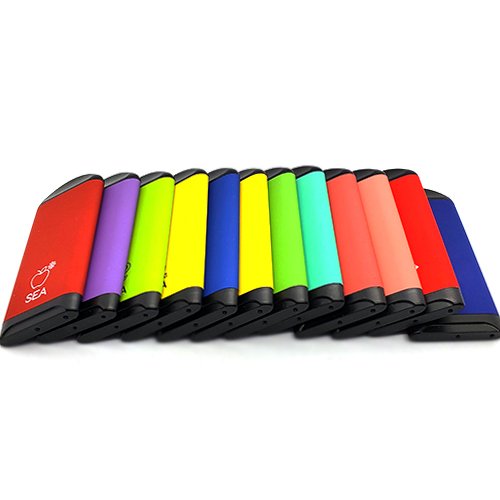 Just like SEA’s Sea Stix disposables, Sea Air disposables are not the most discreet devices around. They’re toned down a bit from the attention-grabbing designs on the Sea Stix, but they’re all very bright and colorful. Each Sea Air device comes in a color that matches the flavor.

The size and slimness of these disposables is what really makes them stand out from the competition. These remind me of the Suorin Air pod system because they’re similarly thin and wide. These are easy to completely palm and vape on. I can easily fit a couple of these into my pocket without even feeling that they’re there. A single Sea Air disposable fits nicely into the coin pocket on my jeans.

Each Sea Air comes in its own individual package. There’s a plastic case that holds the Sea Air which slides out of a paper sleeve. This sleeve displays the flavor and general information about the Sea Air.

These are prefilled with 2.6ml of 5% nicotine salt eliquid. This is double the capacity of SEA’s Sea Stix disposables which only come with 1.2ml of eliquid. Paired with the 450mAh, you can expect these disposables to last much longer than its competitors.

Overall the design and build quality of the Sea Air’s are good. I particularly like how thin they are. The rubberized coating and comfortable mouthpiece are highlights of these disposables. 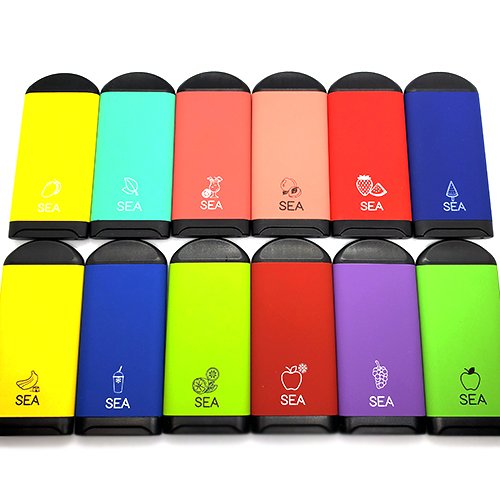 Sea Air’s come in a ton of different flavors; 14 in total. I was sent 12 of them to review. Here’s the breakdown on the flavors:

Green Apple: This is a sour green apple candy flavor. The flavor is light but there’s still enough flavor there that you can taste it. I would have liked this flavor to be stronger. There’s a touch of tang with every draw which is nice, but I found myself taking longer draws just to get more vapor and flavor. Very tasty, just very light.

Banana Ice: This tastes like banana Runts candies, but like the Green Apple, the flavor is light. There’s a hint of cooling but not very much. I liked vaping on this flavor, even with the light taste. But if you’re expecting a strong banana flavor you’re going to be disappointed.

Mint: This delivers a really good fresh mint taste. It’s refreshing and chilly but it’s not too cold. The balance is perfect between being slightly sweet and still minty and cool. Former menthols smokers will definitely like this disposable a lot.

Peach Ice: There’s very little cooling in this flavor, despite it being called Peach Ice. The flavor is pure, ripe and natural peaches and it’s very good. The flavor is very powerful and it tastes close to a peach juice drink. Good flavor here.

Lush Ice: Exotic but light watermelon. The watermelon flavor isn’t too powerful but I wouldn’t call it light. It’s odd that this disposable is a blue color for watermelon. Like Peach Ice there isn’t a lot of cooling but it’s a nice sweet flavor. The vapor is smooth and very nice to vape on for prolonged periods of time.

Red Apple: Unlike a lot of other red apple flavors that have a candy taste, this red apple flavor is natural and fruity. It’s not super sweet so it’s good if you dislike candy apple ejuices. Fruity apple is present on the inhale with a touch of cooling on the exhale. Another good flavor.

Kiwi Lemonade: This is such a unique flavor and it’s so good. The blend of kiwi and citrusy lemonade goes together perfectly and just tastes delicious. This is a wonderful and refreshing flavor that I’m surprised isn’t more popular. I taste both the kiwi and the lemonade at the same time on the inhale and the exhale. Refreshing and balanced, this is one of my favorite Sea Air flavors for sure.

Blue Slush: This tastes a lot like a blue slushie that you would get from a gas station or convenience store. It’s sweet and sugary, just like I expected it to be, and slightly tangy as well. The blue raspberry flavor is quite pronounced and there’s a bit of menthol in here as well. I’ve got a bit of a sweet tooth and this definitely hits the spot.

Mango: A lot like other mango ejuices, this tastes like a mango gummy candy. The vapor is heavy but bearable. This is a pure mango flavor on the inhale and the exhale, with no other notes of other fruits. As a mango lover, I’d say that this is a great disposable flavor.

Pina Colada: Why have I never tried a pina colada flavored ejuice? I’ve been missing out! This is my favorite of the Sea Air flavors. It tastes just like a pina colada that you get from a bar; there’s a smooth coconut flavor and a sweet and slightly tangy pineapple that come together perfectly. Sea Stix really got the flavor just right with this one.

Strawberry Watermelon: The description of this flavor says it’s strawberry watermelon and banana but I only taste the strawberry and watermelon. The flavors are mixed on the inhale and exhale but come together well. There’s no menthol in this flavor, just pure semi-sweet fruits. If you don’t like menthol but want to try a good Sea Air flavor, this is the one that I would suggest. 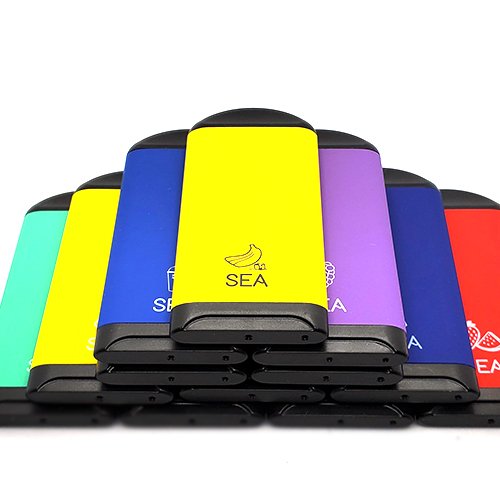 I’ve been using the Sea Air disposables for a few weeks so far. I’ve been alternating between the different flavors so I could try them all out and thus far, they’re all still working. Even the Kiwi Lemonade and Grape Pop ones, which I’ve been using a lot more than the others, are still going strong.

The 450mAh battery paired with the 2.6ml of eliquid allows these disposables to last a long time; much longer than their competitors that only have 1.2ml of ejuice and are rated for 250-300 puffs. I’m certain that I’m going to get another week out of each of these easy.

One problem I’ve been having is the draw activation. On most of the disposables, the draw activation works fine. But on a few of them it’s much more difficult to pull. I really have to put my lungs into it, to the point where it’s uncomfortable.

Other than this issue, these disposables have been great. The 5% nicotine salt eliquid delivers a solid throat hit and a satisfying draw that I really enjoy. The draw isn’t as strong as what you get from a similarly powered pod vape, but it’s good enough to keep nicotine cravings at bay. Former smokers or those trying to quit will get good use out of these little guys.

I haven’t had any leaking from any of the Sea Air disposables. Not even so much as a drop. However, the strawberry watermelon and mint disposables (the ones where I have to pull harder to get a draw) have given me a bit of ejuice in my mouth.

To answer the question from the introduction paragraph: do we really need another disposable vape? Well no, not really, but Sea Air’s are a good option if you’re looking for one. The massive battery and eliquid capacity allow these to last much longer than similar products, and the price isn’t very different. For the money, these are a good value for how much you can vape on them.

Sea Air’s have a few small issues like the difficult draw activation that I experienced on a few of the disposables, but overall they’re good devices. Anyone wanting a small disposable that will last and that delivers a strong throat hit will be happy with a Sea Air.