Viggo Pod System Review: How Does This Closed System Stack Up? 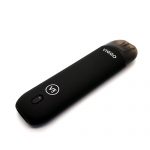 Vaper Empire are an Australian based vaping company that produces their own vape starter kits and ejuices. They sell a variety of ejuices flavors and a few different vaping systems such as their Vibe Series, V-Pack II Series, V-Twist Series & Vantage Series.

Most recently they’ve released the Viggo Series pod system; a small and discreet pod vape that uses replaceable pods. These pods are filled with 1.8ml of nicotine salt ejuice and come in either 0% or 3% strengths.

The Viggo has three voltage modes, a 400mAh battery, and micro-USB charging. All-in-all, the Viggo looks like a simple and easy way to vape. But is it worth picking up?

I’ve been vaping on the Viggo for two weeks now to find out. Let’s get into the review. 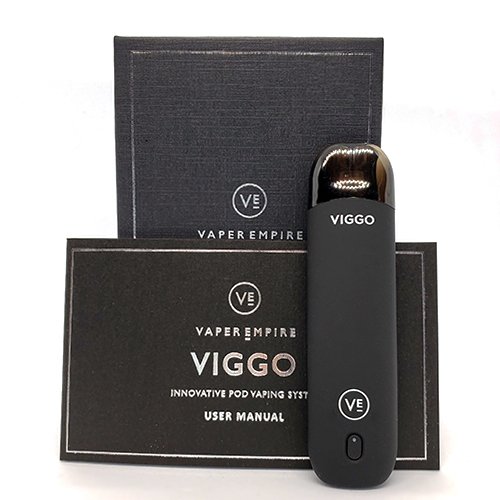 Listed above are what you get if you just purchase the Viggo device. Note that there are no pods included if you purchase the device alone.

However, Vaper Empire sells starter kits that come with pods and they aren’t much more expensive than the device itself. You’re going to need pods to use the Viggo so grabbing one of the starter kits is a good idea.

One of the starter kits gets you a pack of 3 pods (your choice of flavor), while the other gets you 3 packs of pods and a PU Leather Bound Pouch. I was sent the leather pouch for this review and it’s turned out to be quite useful. It holds the Viggo as well as a few pods and it zips up to ensure that nothing falls out and gets lost. The pouch beats carrying the pods in your pocket and getting lint in the mouthpiece, that’s for sure! 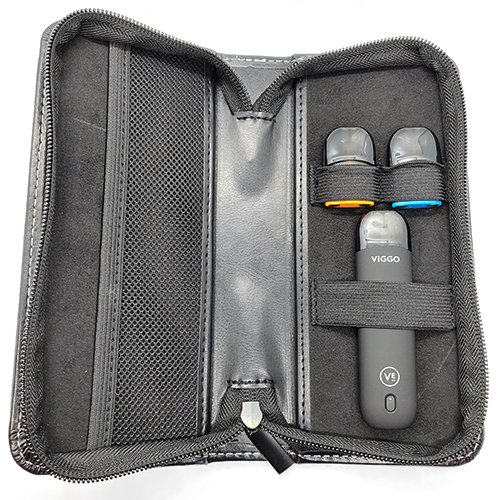 The Viggo is a small, slim, and super light. This is actually one of the lightest and most portable pod vapes I’ve used. It’s only 79mm tall, 25mm wide and 12.5mm thick — super small and very easy to carry around with you. I can throw the Viggo in my pocket and forget that it’s even there.

In addition to the small size, the Viggo weighs only 24g with a pod installed. It’s feather-light and as a result I can hold it in my mouth and vape on it like I used to do when I smoked cigarettes. The light weight is definitely a selling point of this device.

The Viggo has a soft-touch, semi-rubberized coating on it that feels good and adds grip. Two weeks in the coating hasn’t scratched or come off and is still looking as good as new. Overall, the build quality is very good. The Viggo feels solid and well-made.

Because of the small size and minimal design elements, the Viggo is quite discreet. It’s easy to pull out for a few puffs here and there and it doesn’t attract a lot of attention.

The front of the device has a single button. This button is not for firing but for changing the voltage output. The button has an LED indicator built into it to display your chosen voltage mode. The button is firm, responsive and works with a nice click.

The pods attach magnetically and are held in place by two large magnets. The magnets hold the pod in place well; even violent shaking doesn’t cause them to come out. However, it’s still easy to remove the pods when you want to. A firm tug and the pod will come right out.

While the pods do stay in place, they do wiggle about quite a bit. The magnets are strong but the fit could be tighter. In any case, pod wiggle is about the only flaw I can find with the design & build quality.

How to Use the Viggo 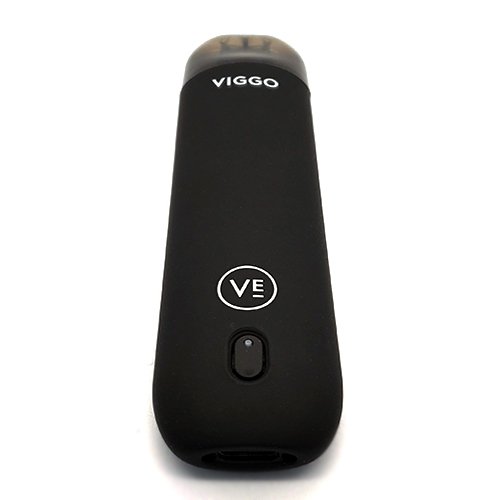 The Viggo isn’t a complicated device. As such, it’s perfect for beginner vapers or those who want something that they can just vape on without having to worry about settings.

To get vaping the first thing you’ll want to do is insert a pod. The pod that comes with the Viggo is a dummy pod that doesn’t have any ejuice in it. Open up your pack of pods and remove one from the packaging. Then remove the sticker from the side and bottom of the pod and insert it into the Viggo.

Before you start vaping, it’s a good idea to set the voltage output to the lowest setting (red). The voltage output can be changed by pressing the button on the front of the Viggo three times. These three clicks have to be in quick succession otherwise nothing will happen.

You’ll see the LED indicator light up in one of three colors: green, blue or red. Green is the highest voltage output at 3.8V, followed by blue at 3.4V and red at 3.0V.

The reason why I say to set it to the lowest output setting first is so that you can find the setting you like more easily. If you find that red doesn’t give you a strong enough draw, you can increase to blue. If blue isn’t strong enough, you can go up to green.

With the pod inserted and your voltage output set, simply draw on the mouthpiece to vape. That’s all there is to using the Viggo. Simple and easy.

The Viggo uses replaceable pods that come prefilled with 1.8ml of 0% or 3% nicotine salt ejuice. There’s no way to refill the pods. Once it’s done, you simply replace it with a new pod. This will be seen as a con by some, but for new vapers it’s perfect. It makes the whole process of vaping easier and hassle-free which makes it more likely that they will stick with vaping.

Vaper Empire carry 9 flavors of pods for the Viggo:

These flavors are sold as packs of three pods. There’s a variety of flavor types here from tobacco to menthol, fruit to dessert. 9 flavors is a good selection to choose from and I think that there will likely be a flavor here for everyone, no matter your preferences. 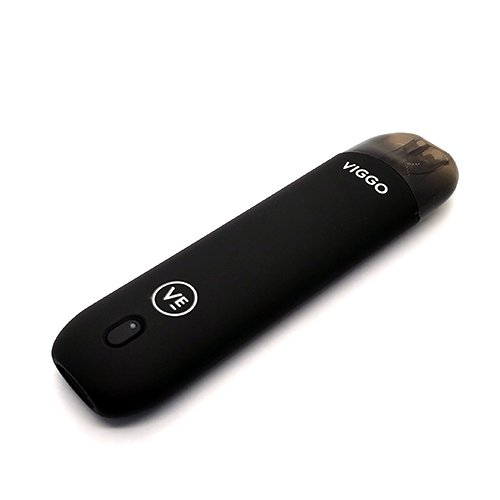 As I mentioned earlier, the Viggo is a small and light device. As such, it doesn’t have a huge battery capacity but 400mAh is good for its size. When the battery is dead, the LED indicator will flash red a couple of times. Unfortunately, there’s no warning before this happens so it’s hard to know where your battery level is at throughout the day.

Vaping on the medium blue output, I was able to vape about a half of a pod before having to recharge. This was just a little over a day of use. You can expect slightly more battery life if you vape on the lowest red output, or slightly less vaping at the highest green output. Overall, battery life is decent as it got me through a day and I vaped on it quite a bit.

From dead, the Viggo took around an hour to fully charge. It does have pass-thru charging but the manual recommends against doing so. To be on the safe side, I wouldn’t vape on it while it charges. 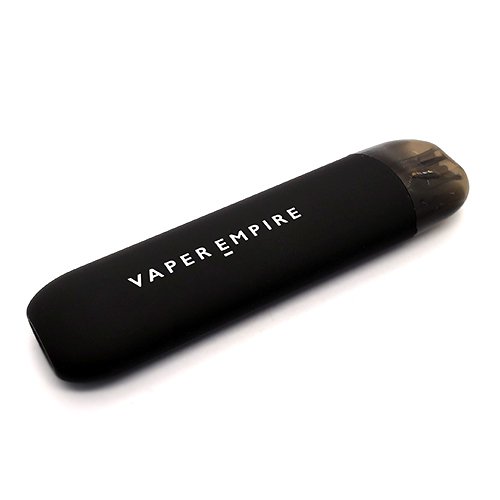 I was sent 5 flavors in 3% nic salt strength to test with the Viggo: Blueberry, Orange Crush, Tobacco, Flat White Coffee, and Menthol. I’ll go over how each of these tasted, as well as the general performance of the Viggo.

An almost natural blueberry taste. The flavor is a nice medium where it isn’t too strong but it also isn’t too light, either. The flavor is fresh, smooth, and tasty. While a lot of other companies get the blueberry flavor all wrong, this one is the opposite. I think Vaper Empire got this one just right.

The name says it all with this one. It tastes just like an orange soda, fizziness and all. It tastes good but the only issue I have is that large draws tend to tickle my throat. Otherwise, this flavor is great.

Ah yes, good ol’ tobacco. This flavor is heavy and strong but still smooth, and recreates a natural tobacco taste. It reminds me more of a cigar than a cigarette, but that can be a positive or a negative depending on what you like. This is one of the better tobacco flavors I’ve tried though as it doesn’t taste artificial at all.

Strong coffee notes and a slight touch of cream is what I taste in this flavor. It’s espresso-esque because of the very strong coffee notes but like their other flavors it’s still nice and smooth. Like their Tobacco flavor, the coffee flavor is natural and doesn’t taste the least bit artificial. Very tasty to vape on. Coffee lovers will be happy with this one!

Is this pod ever minty! It will certainly wake you up in the morning. This pod is chillingly cold, crisp, but also slightly sweet. If you don’t like an icy menthol then I would steer clear but for those who are looking for a blast of cool, this is the pod for you. The sweetness is paired just right with the chill and the draw is still smooth. No doubt, this is a well done menthol flavor.

As for the device itself, the Viggo has been reliable and pleasant to vape with. One thing that I love is the draw. It’s a tight MTL draw and it’s just perfect. The draw activation works flawlessly without having to pull too hard so it feels effortless and natural to vape on. This smooth draw activation and tight MTL draw recreate the sensation of smoking a cigarette to a tee. The 3% nic salt is also great. I get a smooth draw, but with a noticeable and satisfying throat hit.

Some of the pods had a little ejuice on the bottom when I pulled them out of the package, but they never leaked during use. The Viggo also worked perfectly for the entirety of my review without any malfunctions or mishaps. I take a draw, it produces vapor. Just like it should be.

I’m not usually a fan of closed system pod vapes, but the Viggo is a solid device. For someone transitioning from smoking to vaping, the ease of use and ‘plug n play’ nature of the Viggo will be attractive because it requires no maintenance. This is a strong selling point for the Viggo.

The device works flawlessly and the flavors are also very good. I only got to try 5 of their 9 pods, but all of the flavors I tried are great. The nic salt in the pods is satisfying and delivers a smooth but pleasant throat hit. There’s not much more to ask for.

Overall the Viggo is a really good closed system pod vape. If you’re in the market for your first vape or just for something that is portable and easy to use, I would highly recommend giving the Viggo a try.

Have you used the Viggo? What do you think about it? Let me know by leaving a comment.