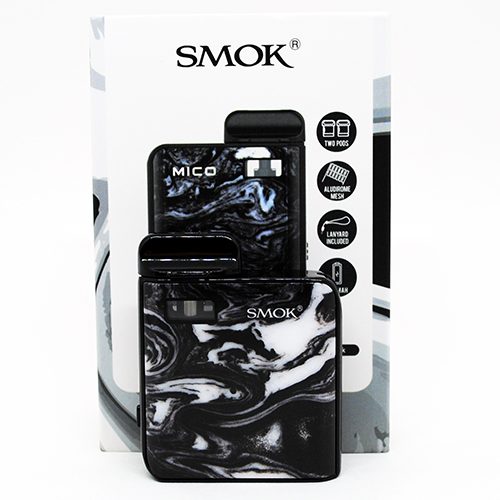 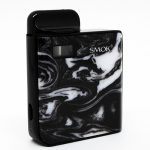 The Mico is the latest pod vape to be released by SMOK. It’s small, light and looks remarkably similar to the Mi-Pod. However, it’s available in seven different resin finishes as well as five unique carbon fibre finishes to give it a look that stands out. It’s also got a few design features that differentiate it from the crowd.

It’s got an ON/OFF switch on the side of the device and an ejuice viewing window so that you can see how much ejuice you have left without removing the pod. It also packs a 700mAh battery, includes two different 1.7ml pods and uses draw-activated firing.

But with so many great pod vapes out right now, is there still room for the Mico? 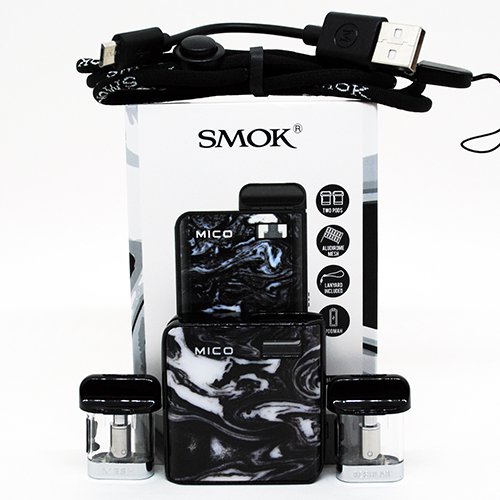 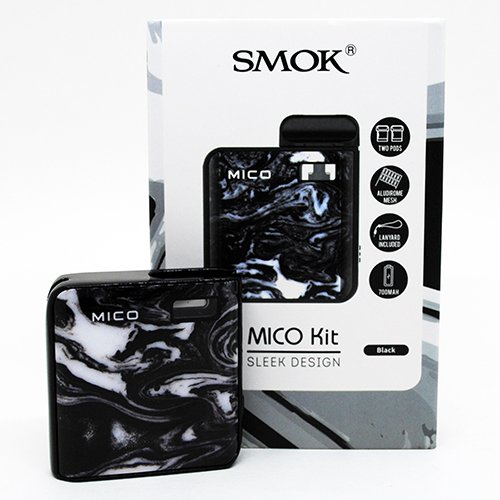 The Mico is small and square with rounded off corners and sides. It’s pretty compact at 56mm tall and 46.5mm wide and it weighs just 65 grams so it’s easy to take around. Even with the pod attached It fits easily into jeans pockets.

The overall appearance and design of the Mico is simple. Even the branding is very minimal. SMOK is printed on one side and Mico is printed on the other. Next to this branding is the ejuice viewing window.  It’s super convenient because you don’t need to remove the pod every time you want to check the ejuice level.

I received the black resin color for this review. There’s a high-gloss finish to the resin that I like, although it does smudge and attract fingerprints easily. SMOK isn’t exactly a company that is known for their quality control but the Mico is a solid vape. It’s nice to hold and it certainly seems well built.

At the top corner of the device there’s a spot to attach the included lanyard. To be honest, it’s probably a good idea to use it. I almost lost my Mico a couple of times due to its small size.

The Mico includes two pods but there is also a pod with a ceramic coil that you can purchase separately. The pods that you get with the Mico are:

At the top of the device is the spot to insert the pod. The pods go in snug and attach magnetically to the device. The magnet is strong enough to grab and fully seat the pod but it’s still easy enough to remove. Once the pod goes in it’s very secure and there’s no wiggling.

Both pods have a 1.7ml capacity and are side filled through a small rubber plug. The hole is large enough and fit all of my droppers and bottle nozzles without issue. The trick when filling is to push your nozzle over to one side so that there’s space for the air to escape.

A nice design feature of the pods are the tabs on either side of the mouthpiece. Because of how slippery the mouthpiece is, trying to remove the pod without these tabs would be tricky. The tabs make it easy to get a grip and the pod pulls out without trouble.

The mouthpiece on the pod is curved and feels comfortable on the lips. It’s one of the more comfortable mouthpieces I’ve used. It also stays cool while vaping and keeps your lips off of the device. 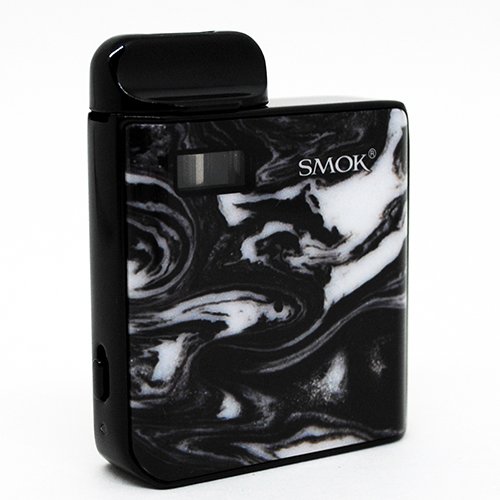 Air enters the pod through a small notch on the side of the device, right below where the pod sits. The Mico is marketed as having a MTL draw but it’s truly more of a restricted lung hit. No matter which pod you use, neither pod delivers a true MTL vape. Taking a draw necessitates using your lungs to pull; you don’t get to hold the vapor in your mouth.

It’s still an enjoyable vape but it isn’t MTL as SMOK claim. Keep this in mind if you’re after a strictly MTL vape; the Mico isn’t it. 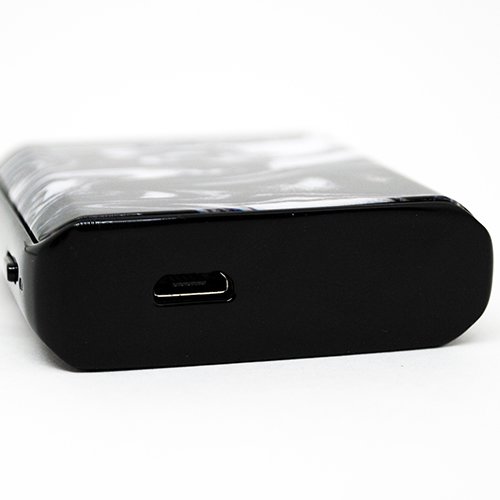 The Mico packs a 700mAh battery which is decent for such a small device. When vaping heavily I got just about a full day of usage. The Mico is a direct output device so the draw does get weaker as the battery dies. At full power it fires at 26W and will decrease down to 10W before the battery dies.

There’s an LED indicator right underneath the ON/OFF switch that lets you know where your battery is sitting. There are three colors:

SMOK call the middle battery level orange but it’s really more of a light green or yellow. In any case, it’s not orange. Recharging the device takes about two hours from dead to fully charged and that’s really the only downside of the battery. Two hours is much too long for a pod vape.

For added peace of mind the Mico has a few safety protections built in. It’s got an eight second cut off if you draw too long, pod detection, short circuit protection and low voltage protection (it will shut off when the battery gets too low in order to preserve the battery). 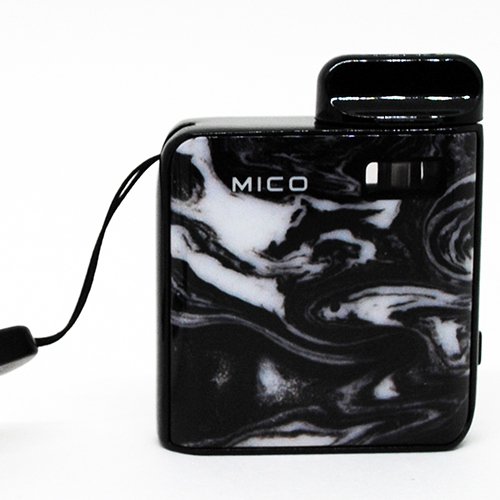 The Mico isn’t a MTL vape. This surprised me because it’s advertised as such. Instead, it’s a restricted lung hit that I still found enjoyable to vape on. The flavor on both pods is good too but it didn’t shine through until after I had vaped a full pod. With both the mesh pod and the regular pod I used 50/50 and 80/20 regular ejuice, as well as a 50mg nicotine salt.

No matter what ejuice I threw at it, the 1.0ohm regular pod vaped and wicked well. I had no spitback or popping, nor did any ejuice get into my mouth. The flavor was just okay at first. Once I vaped a full pod though, the flavor got considerably better. It’s not the best flavor pod out there but it’s still good.

The 0.8ohm mesh pod delivers better flavor than the regular pod, if only slightly. It’s a small difference but it’s noticeable nonetheless. This pod produces a warm, consistent vape and makes a considerable amount of vapor too.

The mesh pod doesn’t wick as well as the regular pod though and it had some trouble keeping up with thinner ejuices. I had some crackling and spit back with the 80VG/20PG ejuice as it seemed to struggle with wicking it properly. Using the 50/50 was much better and it vaped without issue.

The draw activated firing is convenient and works well. It was nice being able to pull this vape out of my pocket and draw on it without having to worry about pressing a button. 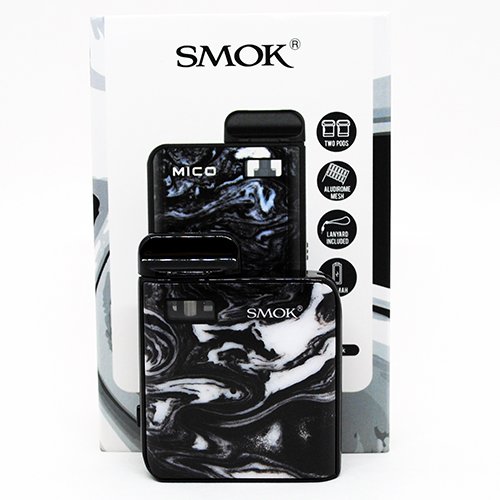 At the end of the day should you buy the SMOK Mico? Well, that depends on the type of draw that you’re looking for. If you’re searching for a MTL draw then I’d suggest you pass. If you’re open to a restricted lung hit, the Mico is a solid and reliable vape.

The 0.8ohm mesh pod is slightly more flavorful than the 1.0ohm mesh pod but it has some trouble with thinner ejuices. On the other hand, the 1.0ohm pod has no trouble wicking no matter what you put in it.

The overall design is nice and comfortable. Plus, the ejuice viewing window and ON/OFF switch are design features that are convenient to have. The draw activated firing works good and the battery life is acceptable. Overall the Mico is a well-rounded pod vape that is worth picking up.

What do you think about the Mico? Let me know by leaving a comment down below!