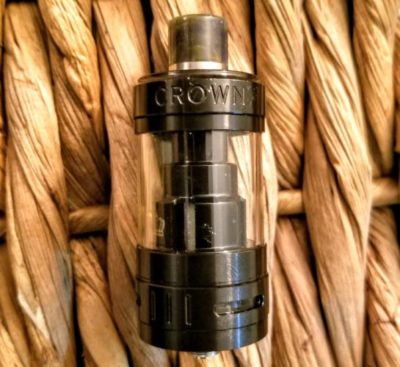 I’ve been using the Uwell Crown III for a few weeks now, and I have a lot of good things to say about it. From the time that I picked this baby up and started using her, I haven’t looked back. I haven’t wanted to look back. It’s that good, so let’s get right into our in-depth Uwell Crown III review.

The Uwell Crown III comes in a clear plastic box that lets you see right through to the goodies inside. Once you open the box up you’ll find:

The Uwell Crown III comes preinstalled with the 0.25 Ω coil. I prefer to vape at lower resistances so I kept it in, but you can swap it to the 0.5 Ω coil if you like. The Uwell Crown III also comes with a little Crown shaped key that you’ll need if you ever want to take off the glass and clean the thing out. You won’t need it to fill the tank, but you should definitely keep it somewhere safe.

The Uwell Crown III is remarkably well built. The black color that I’m using has a really sleek look to it that goes well with any mod. The tank itself has a very solid feel, and the Uwell Crown III can definitely take a beating without breaking. It’s been dropped a couple of times, and there isn’t so much as a scratch on it. When I first got it I had a few problems with leaking, but once I cleaned it out and tightened everything back up it was perfectly fine.

The Uwell Crown III a features a 5.0ml capacity tank, and removable cap which you unscrew from the top. After unscrewing the top cap, you simply pour your desired juice into one of the two holes at the top of the tank. Done! I hated some other devices because they were too messy to fill, but the Uwell Crown III makes it really simple. That is something that I found very appealing about this vape, and I’m sure others will as well.

If you’re looking to disassemble and clean out your Uwell Crown III tank, you’re going to need the key that comes with it. After unscrewing the top cap, fit the Crown Key into the slot and turn clockwise. Take out the little disc that comes loose, and you can now disassemble the tank for cleaning. 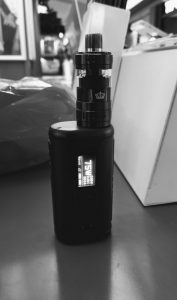 The Uwell Crown III performs extremely well and outputs large, satisfying clouds. The flavour that you get from the Crown III is on-point, and you can really taste the flavours of the juices that you vape. Compared to some other devices, the Uwell Crown III ranks near the top in terms of flavour and cloud output.

The tank capacity was something that I found great, especially as a heavy vaper. Although the Crown III is super simple to fill, it’s even better because you don’t have to fill as often! Even when vaping on these sub-ohm coils at high wattage, I still found that a full tank of juice would usually last me through the day. Uwell receives a huge thumbs up for the large tank size.

Overall, I found the vaping experience with the Uwell Crown III to be top-notch, and I have been recommending this vape to those that I know in person. The large tank capacity, excellent flavour profiles, and satisfying cloud output are all reasons you should have the Crown III as part of your vape collection.

When it comes to a dependable sub-ohm tank, the Uwell Crown III is up for the challenge. From the excellent build quality, to the amazing flavour and tank size, you can’t go wrong with the Crown III. If you’re thinking of picking up your first tank, or looking to add one to your collection, the Crown III won’t disappoint you. It performs as good as it looks, and it looks super good. I found the taste to be much better than any of the other tanks I’ve tried, and although the Crown III came out last year it’s still the tried and true of sub-ohm tanks.