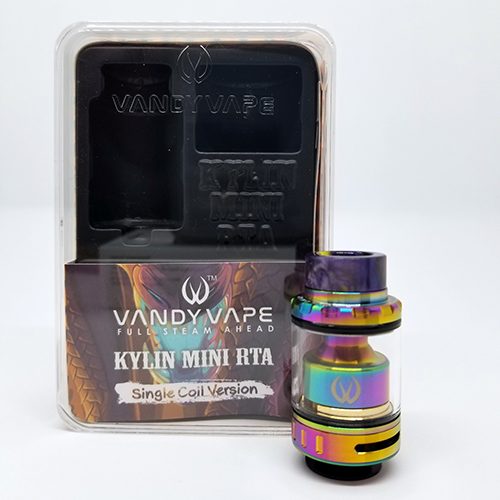 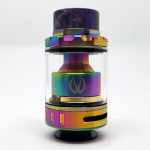 The original dual coil Kylin was a highly successful RTA that was loved for its large tank capacity, simple build deck, and superb flavor. Even to this day, the Kylin remains one of the best dual coil RTAs available.

Now, Vandy Vape are back with their follow-up to the Kylin platform, and it’s sure to get single-coil users excited: the Kylin Mini. The Kylin Mini RTA brings an updated postless build deck, a 5ml max capacity, and a crazy “honeycomb” style airflow system that can provide some massive flavor.

I’ve been busy testing and vaping with this tank, and in this in-depth Kylin Mini RTA review I’m going to go over everything you need to know. On to the packaging! 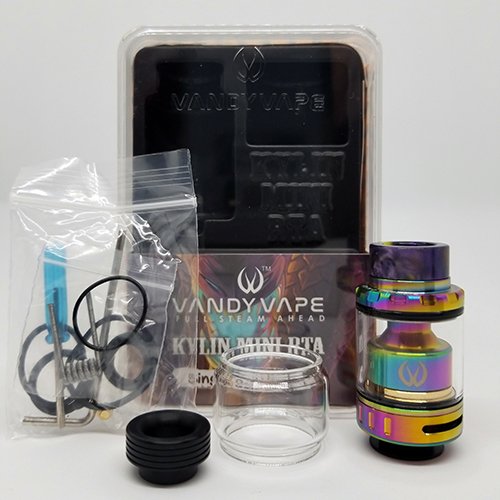 The Kylin Mini RTA comes in a small, transparent plastic case that allows you a peak at the Kylin Mini and replacement glass inside. Open it up and you’ll find: 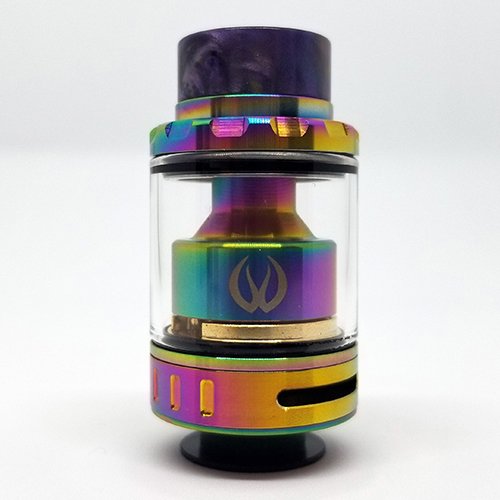 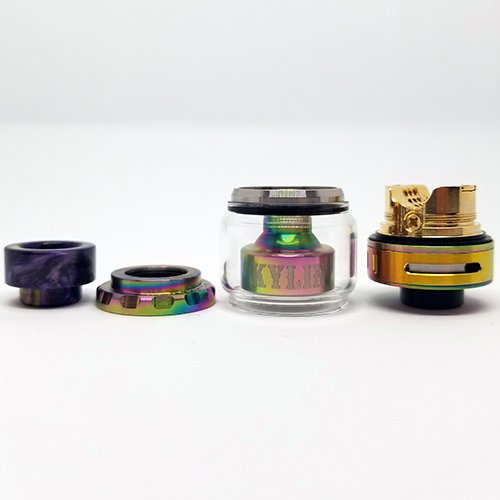 When I saw this tank in person, I was immediately in love with the look. The rainbow colored finish that we received is gorgeous, and compliments the design of the tank very well. There are two drip tips included with the Kylin Mini: an 810 resin drip tip, and an 810 ribbed drip tip. Both drip tips are wide-bore and very well made. They keep your lips cool, and both feel great to use.

However, there may be a small aesthetic problem if you prefer to use your own: most other 810 drip tips will not sit flush, and will have a small gap at the base of the drip tip. Now, although this doesn’t cause a problem while vaping, it is still something to note. Don’t worry though, your drip tips will still look good on the Kylin Mini. 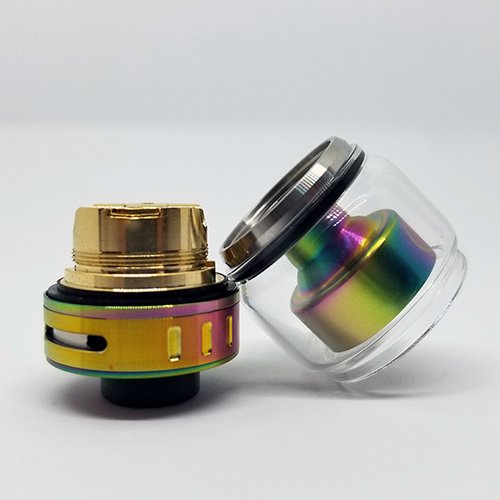 The chimney on the Kylin Mini is rather narrow to intensify flavor, and widens down into a domed shaped bowl that covers the build deck. This contains your coils and wicks and concentrates the vapor for a more intense and flavorful draw. The threading on the chimney is super smooth and very well machined.

The build deck on the Kylin Mini is definitely its most interesting feature, and stands out for both its originality as well as its practicality. Just take one look at this beautiful deck and I guarantee you’ll be impressed. The Kylin Mini is a single coil RTA, and the deck is 24K gold plated for superior conductivity. The deck curves under and around your coil in a sort of “U” shape, and sort of “hugs” your coil for better flavor. Aw, how sweet.

In addition, there are three rows of seven air holes that run underneath the deck. This gives it a honeycomb-like appearance, hence the naming, and also leads to amazing flavor. Because of the position of the holes, your coil gets hit with air from all directions, including underneath. This creates very impressive and smooth draws.

The build deck on the Kylin Mini is postless, and your leads are secured from the sides. You’ll have to measure and precut your leads, however, securing your coil is simple. There is a wicking channel on both sides of the Kylin Mini, and this is where your screws are located. The wicking ports are rather tiny, and there really isn’t a lot of room for your wicks. However, this isn’t necessarily a bad thing. More on that later.

The Kylin Mini has two wide airflow slots that are fully adjustable, and there are a few notched cutouts on the airflow control ring that give a good grip. The two airflow slots funnel air directly through the honeycomb holes in the deck, to the coil, then up and through the narrow chimney. The design is very impressive.

Building on the Kylin Mini RTA 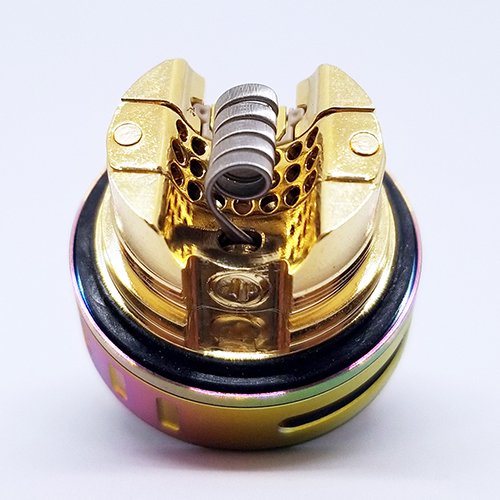 Building on the Kylin Mini is extremely easy, and this is due to its postless deck. Although you have to measure and precut your leads, if you cut little by little you won’t have a problem. Simply drop your coil in, and secure your leads with the screws in the wicking channels.

Wicking the Kylin Mini is also super simple, but there is a trick to it. You want to make sure that your wick just barely covers the top of the screws. This means cutting your cotton very short. Combing to thin is also highly recommended.

Once you’ve got your wicks measured out, prime it with a bit of ejuice, and gently put the tank back together. Be careful and ensure that your rubber o-rings are sitting properly, and that you aren’t catching your wicks on the threading.

I had to learn these tricks by trial and error, but at least you won’t have to. Overall, building on the Kylin Mini is great, and very hassle free. And with the coil positioned slightly-raised in the middle of the deck and wicks cut at the right length, it puts out some impressive performance too. 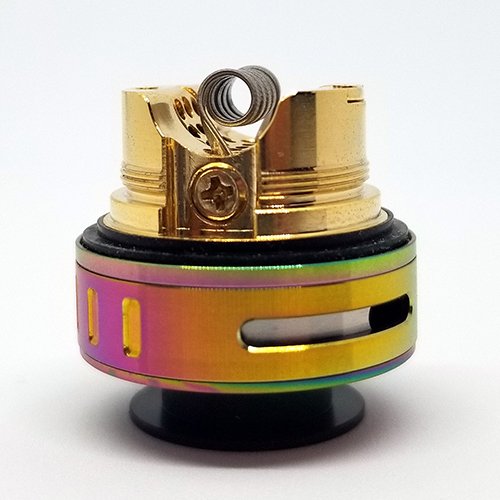 The Kylin Mini performs like a champ, and is definitely one of the best single coil RTAs currently available. The honeycomb airflow is an amazing design feature, and it really makes your draws much more flavorful. Even though there are a lot of airflow holes, the small chamber and narrow chimney still produce a very dense vapor with the slots half closed.

The performance that you get out of the Kylin Mini is certainly anything but small, and rivals some of the best RTAs in the game. The flavor is absolutely incredible, and will give you flavor that is notable better than most sub-ohm tanks. Hell, the Kylin Mini will even give some RDAs a run for their money. Vandy Vapes combination of intelligent design features makes the Kylin Mini hard to beat. 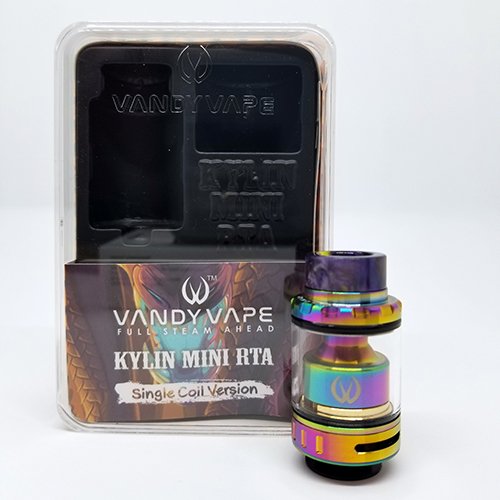 Overall, the Kylin Mini performs exceedingly well for a single coil RTA. The honeycomb design and postless deck make it easy to build on, and the flavor it delivers is top notch. I really like what Vandy Vape have done with the Kylin Mini, as it’s definitely a step in the right direction as far as ease of use and flavor.

Simple, well designed, and well built. The Kylin Mini RTA is a winner in my books.