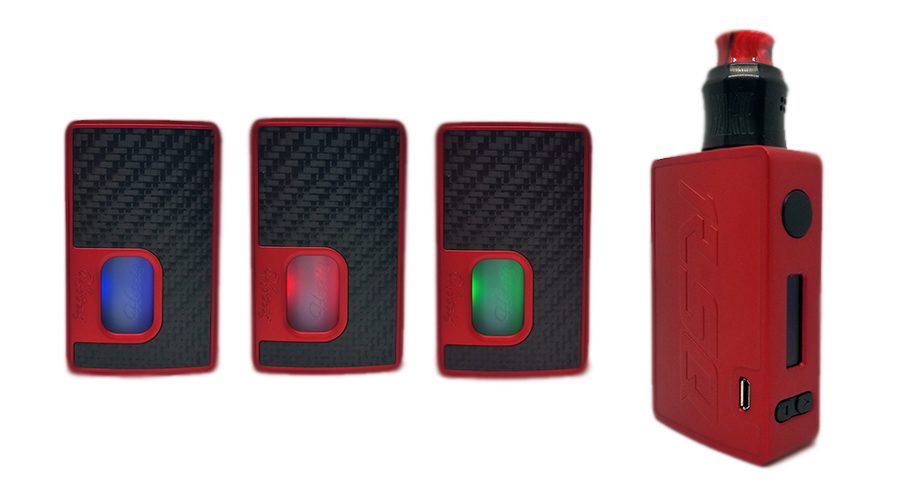 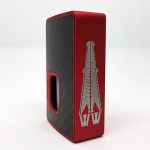 A collaboration between Hotcig & Rig Mod WW, the Hotcig RSQ is a regulated squonk box mod. And while you may or may not have heard of these companies previously, the RSQ piqued my interest from the moment that I saw it.

Its beautiful compact design, large 7ml squonk bottle, ability to fire at up to 80W, and great Temperature Control mode make the Hotcig RSQ stand out from the crowd. But just how does it measure up against the top dogs? Actually, remarkably well.

I’ve been busy testing and vaping away, and in this in-depth Hotcig RSQ review I’m going to go over everything you need to know about this device.

So should you pick one up? Keep reading to find out! 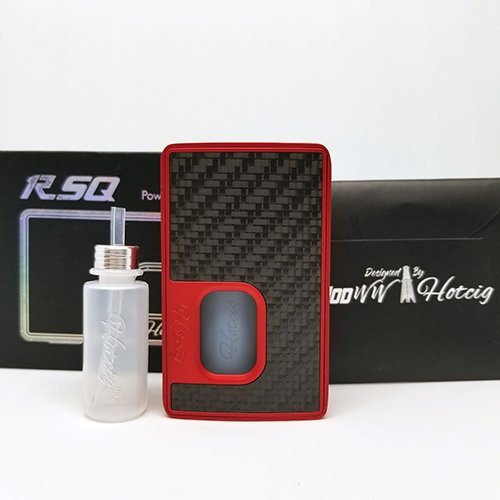 The Hotcig RSQ comes in a pretty small and compact box. It opens by pulling the top up and off. Interestingly, the picture of the RSQ on the box is the actual size of the mod inside. Open up the box and you’ll find: 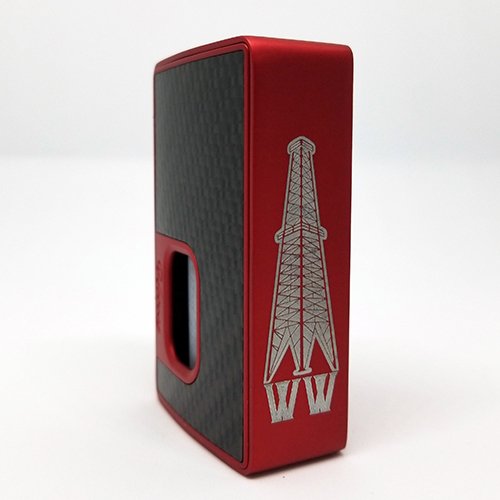 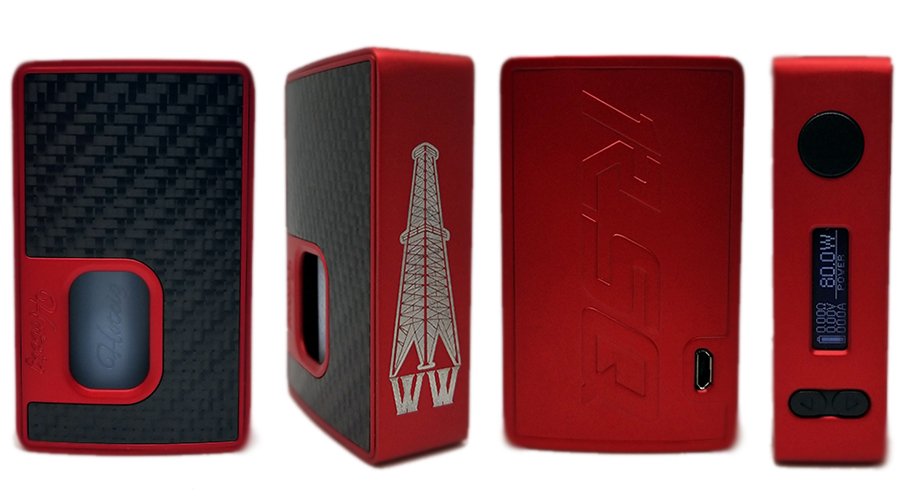 The Hotcig RSQ feels really solid, and you can tell that it’s a well-built device from the moment that you hold it in your hand. The RSQ is a pretty small squonk mod, but the all metal construction gives it a decent weight and a sturdy feel. It also has a rounded rectangular shape that makes it comfortable to hold. For the small size of the device, it’s a lot heavier than the slightly larger (and plastic) Pulse 80W. So if weight is a concern, you might want to look into another squonk mod.

The paint finishes available for the RSQ are beautiful, and the one that we received for review was an especially gorgeous metallic red. However, there are also black, gunmetal, orange, blue, and silver color options to fit your taste. The paint quality is also rather good in terms of durability, but I started to have some minor paint flaking/fading in the bottom corner of my mod, as well as in one other spot. It’s really rather minor (less than 2mm), but noticeable nonetheless.

The back of the device features “RSQ” boldly embossed in the metal body. Right next to this is the Micro-USB charging port. The side of the device is engraved with Rig Mod World Wide branding, and the logo is rather cool. Finally, there’s Hotcig branding engraved on the battery cover. The branding on the RSQ is classy and understated, and gives the device a high-end and sophisticated look.

The battery cover is really rather nice, and has a carbon fibre look and texture to it. This gives the device a bit more grip, and in my opinion, adds a more high-end look to the device. While I had read and heard complaints of the battery door not sitting flush and rattling, or even popping off the device entirely, I did not experience any of these problems. The battery door on my RSQ sits and fits perfectly, and doesn’t make the slightest rattle, even when I shake the device around like a mad man.

Because the battery compartment on the RSQ is rather tight, I damaged the wrap on one of my batteries when trying to remove it from the device. While there is a little room at the bottom to get your fingers in, I ended up using the battery cover to get the battery out. Be careful that your batteries don’t catch the bottom plate when removing or inserting them.

The Hotcig RSQ is a single battery squonk mod, and is designed for use with an 18650 battery. While I would have definitely preferred support for 20700/21700 batteries instead of the smaller size, the battery efficiency of the HM chip proved to be pretty good. But more on that later.

The Hotcig RSQ has three buttons: one large circular fire button, and two small adjustment buttons. All three buttons are located on the side of the device.

The fire button is circular and smooth, and works with a satisfying click. The adjustment buttons are small and rounded with arrows, and also work with satisfying clicks. The buttons are well made and have a high-quality feel to them. There’s no rattle, and they’re definitely not cheap. My only problem is with the fire button: it spins. This is more of a mild annoyance than anything, but I wish that the button was stationary.

The Hotcig RSQ has a small 0.91” OLED display that shows basic vaping information. It’s quite crisp and easy to read, and will display wattage, atomizer resistance, battery life, and voltage. It also has a customizable fourth readout.

The RSQ comes with two squonk bottles: one soft silicone bottle, and one hard plastic bottle. They will each hold up to 7ml of ejuice, and are built well to prevent leaks. However, the metal used for the caps just feels flimsy, and they could have definitely used a better quality cap.

Interestingly, the Hotcig RSQ has a colored LED located beside the squonk bottle. This can be set to change between red, green, and blue. You can also choose one solid color, or turn it off altogether. I liked having it set to red, as it matched the color of the device and looked wicked. 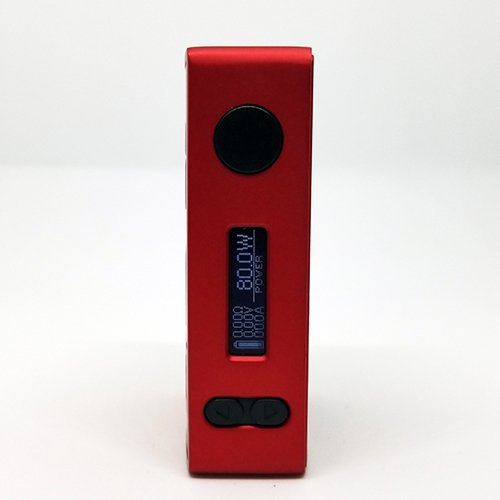 The Hotcig RSQ is a single 18650 battery squonk mod, and utilizes the little-known HM chipset. For a chip I had never heard of, it’s actually quite good and packed with a full set of features. The RSQ supports Power Mode, Temperature Control Mode, and Bypass Modes. To turn the device on or off, click the fire button five times fast. In Power mode, the RSQ will fire at up to 80W. In TC mode, it will do 200-600F and supports Ni200, titanium, and stainless steel.

The OLED display on the RSQ is crisp and clear, and I had no problem with the readouts. As mentioned earlier, the display will show basic vaping information such as battery life, wattage, atomizer resistance, voltage, and by default amperage. This last readout can be changed to puff time, a puff counter, or a battery life percentage indicator.

To access the menu, click the fire button three times. You can use the fire button to go to the next option, and the adjustment buttons to change the settings of the current option. Some of the things you can do include:

There is also another menu that can only be accessed when the device is locked. To lock the device hold both adjustment buttons until the screen displays “Key Locked”. Now, you can:

Being able to change the display orientation is quite neat. I also liked the ability to change the LED to a single setting, as I thought the red matched nicely with the mod. 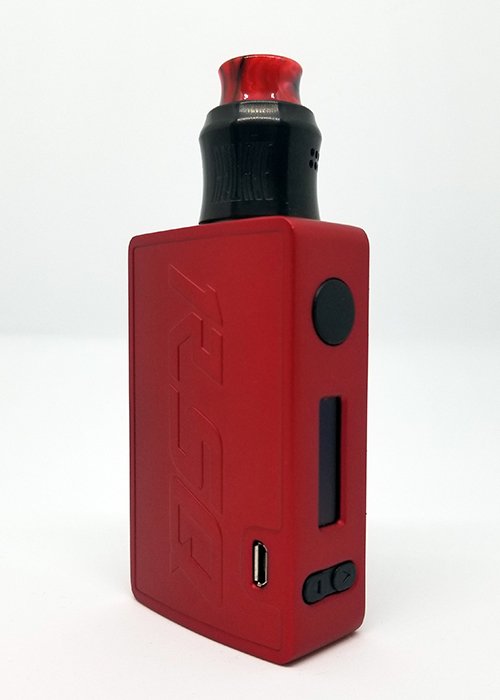 When it comes to performance, the RSQ stands out from the squonk mod crowd. I myself am an avid squonker, and I love using regulated mods because I have the ability to customize my wattage. There simply aren’t that many great regulated squonk mods available on the market, so I was both pleasantly surprised and relieved that the RSQ performed so well.

While it doesn’t fire as near instant as some of the other regulated squonkers that we’ve used, the device works superb after the first draw of the session. Power mode worked like a charm all the way up to 80W, and TC mode worked without a hitch as well. Both modes worked true to their readings, and provided a hassle free vaping experience.

Battery life was actually pretty good for a single 18650 battery mod, and I was using it at around 50-60W with a 2600mAh battery. The battery efficiency on the HM chip has proven to be pretty good, and I found the battery life to be much better than what you would normally expect from other single 18650 mods.

When it comes to squonking, the RSQ works flawlessly. The HM chip is also waterproof, so it pairs nicely with a mod made for squonking. When I first received this mod, I used the silicone squonk bottle and it worked great. But after a while, I decided to test the hard plastic squonk bottle, and that’s the one that I’ve stuck with using ever since. I found the harder plastic bottle easier to handle and manage without spilling juice, and so I much preferred it to the soft silicone bottle(although it is much harder to squonk). 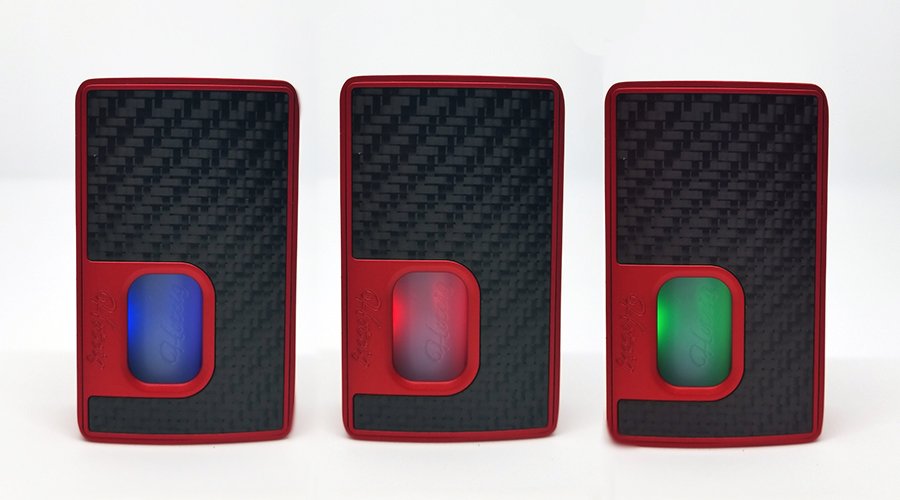 Overall, the Hotcig RSQ is a great performing regulated squonk mod that feels solid to hold in your hands and will fire reliably in either Power or TC mode. I rather enjoyed using it, and it squonked and fires without a problem. While there a few minor issues with the device, such as the battery compartment being very tight and the squonk bottle caps being a little cheap feeling, there isn’t much else negative to say.

The great performance and great build quality of the RSQ solidly places it among the best regulated squonkers available today. While the use of a single 18650 battery is a little disappointing, the battery efficiency of the HM chip leads to some pretty long usage times.

Would I recommend the Hotcig RSQ? If you’re looking for a solid squonk mod for mid-wattage vaping, I positively would. If you’re someone who likes vaping at higher wattages, I would probably go for a different device. Overall, the Hotcig RSQ is a winner.