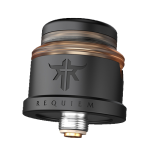 The Requiem is an RDA produced by Vandy Vape and designed by Spanish YouTube vape reviewer El Mono Vapeador.

Vandy Vape and El Mono Vapeador have teamed up in the past to make tanks like the Widowmaker RTA; a tall and beefy dual coil RTA with side and bottom airflow control.

But where the Widowmaker RTA is big and complicated, the Requiem RDA goes in the complete opposite direction. Rather than tall and beefy, the Requiem is short and small. It has a small, single coil build deck, side airflow control, and it comes with a 510 squonk pin.

For being so small and simple, is the Requiem worth picking up? 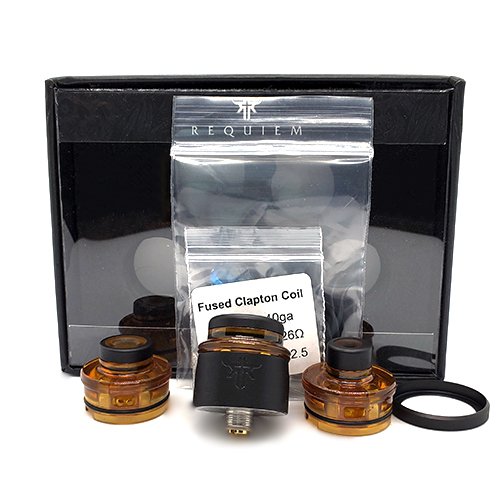 The first thing I noticed about the Requiem is just how small it is. It has a 22mm diameter (24mm if you use the beauty ring) and, excluding the drip tip, it’s only 15mm tall. This is a good sign for the flavor production because the tiny deck and chamber should lead to better flavor. But the small size looks out of place on most dual battery mods and is much better suited for a small, single battery mod like the Pulse V2.

The build quality of this RDA is great. The machining is clean and all of the parts fit together nice and snug. Vandy Vape can be a bit hit or miss with their build quality but I’m happy to say that they got this one right.

The Requiem comes with three top caps and each of them have a different drip tip. One is for DL, one is for RDL, and one is for MTL. All three top caps are made of polished Ultem with a black drip tip. The airflow slots on the top cap fit into the build deck and lock it into place.

The body cap is painted matte black and it matches the drip tip. There’s a subtle Requiem logo engraved into the body cap but that’s it for branding. The body is short and thin and simply slides on and around the build deck. Because the top cap locks into place on the build deck, you have to turn the body cap to adjust the airflow on the Requiem.

The build deck is straightforward. It’s a single coil, two post build deck with sturdy Flathead screws. The legs of your coil have to be facing opposite directions in order to be installed on this deck. The Requiem comes with two fused clapton coils made out of Ni80. These coils have 4 wraps and an ID of 2.5mm. You could probably get away with 5 wraps and a 3mm ID, but coils larger than this won’t fit on the build deck. This isn’t a deck for exotic builds at all.

The Requiem also comes with a coiling rod. This is useful because the deck has indents to lay down your coiling rod and perfectly position your coil.

One thing you’ll notice is that there are cutouts on the floor of the build deck. This is where the airflow channels from the top cap sit. This deck design ensures that airflow is always pointing directly at the coil.

The first top cap/drip tip is for MTL. It has a narrow bore, removable 510 drip tip. It has two airflow slots that end in a single pin hole. With the airflow open I get a loose MTL draw that can be restricted down to a tight MTL draw by twisting the mid cap.

The second top cap is for restricted direct lung vaping. It has a medium-bore 510 drip tip. This drip tip is interchangeable with the MTL top cap. This top cap has two airflow slots that end in two pin holes. With the airflow open I get a slightly restricted DL draw but it’s still very airy. Closing the airflow down almost all the way let me get a restricted DL draw.

The last top cap is for DL vaping. The drip tip is removable and it’s about 1/3rd the size of a standard 810 drip tip. If you find it too short then you can replace it; any 810 drip tip will fit. This top cap has two airflow slots that are completely open and the same width throughout. No matter how you adjust the airflow, you’re going to get a very airy DL draw.

The inclusion of three top caps to achieve different levels of airflow is really neat. Want a different draw? Just swap top caps. Vandy Vape and El Mono Vapeador did a really good job of providing options without making it too complicated. My only con with this system is that you have to carry the top caps with you if you want to switch airflow setups on the go.

Building on the Requiem RDA

This has got to be one of the easiest decks I’ve ever built on and that’s for a number of reasons. The first is that the screws are nice and large. This makes loosening or tightening a breeze. To start building, loosen both post screws.

Next, take your coil and place it on the coiling rod that comes in the package. You can lay down the coiling rod on the build deck and it will fit into the two semicircular notches on the edge of the build deck. This ensures that your coil is perfectly centered for the airflow slots. Make sure the coil is over the gold pin in the middle of the deck and then tighten the post screws down.

Now, you’ll notice that there’s some space between the post screws and the edge of the build deck. I love this design because you can trim your legs without having to worry about getting them completely flush. On other decks this can be an issue because your coil legs could contact the body cap and cause a short; not on this deck!

At this point it’s good to pulse your wire at low wattages to check for hot spots; short pulses at 20W will do for the included coils. If your coil isn’t heating up evenly you can run a pair of ceramic tweezers across the surface of the coil. This should fix the issue.

For wicking you will want to cut your cotton just to the edge of the build deck. Comb/fluff your cotton and then tuck it into the wicking channels.

Changing the Requiem over to squonk mode is easy. Unscrew the 510 pin and also unscrew the plug underneath it. Make sure to hold the deck together as you screw in the 510 squonk pin. 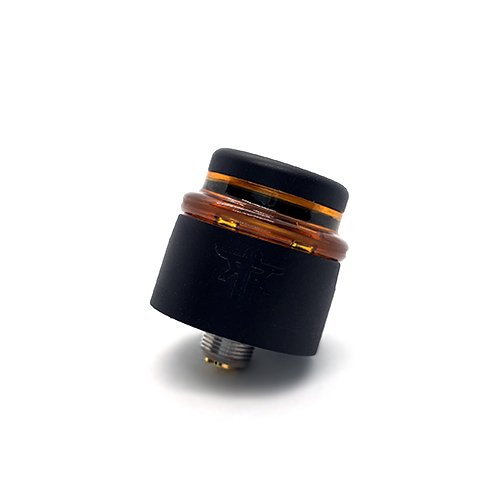 I’ve had a blast using the Requiem and a big factor in my enjoyment comes down to its sheer versatility. Just using the included coils you can achieve any kind of draw you want. When you want a different draw you can just switch the top cap.

Flavor from the Requiem is really good and I think this comes down to a combination of factors, mainly the build deck locking the airflow slots to perfectly hit the coil, and the small and short build deck concentrating the vapor. For a single coil deck the flavor is downright amazing.

I didn’t find that the flavor changed much with the different top caps, only the draw. Maybe the flavor is very slightly better with the MTL cap, but it’s not a significant difference.

Something I have to mention is that the Requiem works much better for squonking than it does for dripping. This only holds true for the MTL and RDL drip tips because you can’t drip straight down through them and have to remove them to drip. It’s doable but it’s a hassle to remove the drip tip every time that you want to rejuice the coil. The DL top cap is big enough that you can drip straight down.

On the bright side, squonking works great. Ejuice squonks from the hole in the center of the build deck and fills up the wicking channels. You can vape immediately after squonking because your wicks get instantly saturated. The deck only holds 1ml of ejuice though so don’t overdo it with the squonking or ejuice can come out the airflow holes.

Despite its small size the Requiem delivers surprisingly big flavor. I love the interchangeable top caps, but at the same time it’s not the most convenient method of altering your airflow. Still, I like it more than I dislike the inconvenience. You also have to realize that any method that allows you to alter your airflow from DL to RDL to MTL is going to have some level of inconvenience to it.

Overall, the Requiem is definitely one of the best single coil RDAs to come out this year. Just make sure to use a squonk mod to get the most out of this little RDA.