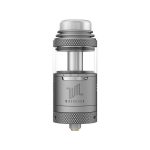 After the success of the Widowmaker RDA, Vandy Vape have once again teamed up with El Mono Vapeador to create the Widowmaker RTA. It’s a tall and beefy tank with a dual coil build deck and a host of moving parts.

This tank was sent to me by Myvpro for the purpose of this review. 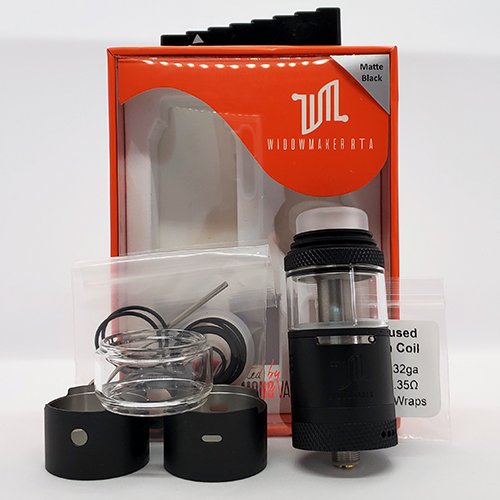 Surprisingly, adjusting the juice flow or airflow works smoothly and easily once the Widowmaker is on a mod. I suggest lubing up the side airflow control ring with some ejuice to make it easier to turn. Turning the glass allows you to adjust the rate of juice flowing from the tank to your cotton. It’s a neat idea, but I always left it fully open and never had a problem with flooding.

There’s some knurling just under the fill cap, as well as on the bottom airflow control ring. The fill cap comes off with just a quarter turn and reveals a single, large kidney shaped fill port. I’m not sure why they didn’t put two fill holes to allow air to escape, but nevertheless it’s easy to fill and I didn’t have a problem.

The drip tip is 810 sized and it’s thick with a wide bore. It’s quite short but the top cap doesn’t heat up too much so this isn’t an issue. Vandy Vape also include a 510 adapter if you want to use a 510 sized drip tip.

The straight glass holds 5ml of eliquid. The bubble glass slightly increases this capacity to 6ml. I think the bubble glass looks great so it’s what I’ve been using. The extra 1ml doesn’t hurt either.

Build quality is as I expected from a Vandy Vape product. Machining is clean and everything fits together properly and as it should. 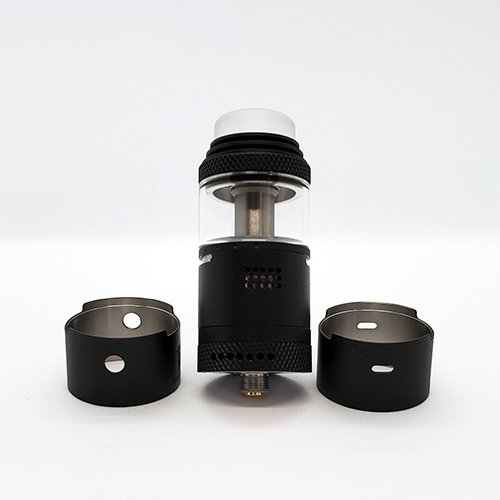 There’s a lot going on with the airflow on the Widowmaker RTA. Out of the box it comes with a side airflow control ring installed that has 15 small holes per side (three rows of 5 holes). But in the box there are two more side airflow rings that can be used: one with a large hole on each side (about 4mm in diameter), and another with a small and narrow horizontal slot on each side.

In addition to the side airflow, the Widowmaker RTA also has a bottom airflow control ring. This ring has seven small holes per side. The air from these holes feed directly to the build deck where there are 36 holes that sit right under the coils.

I preferred the airflow ring with 15 holes over the other two because it gives you a wider range of adjustment possibilities. It’s also not as loud as the ring with the single large hole.

The Widowmaker RTA can be adjusted from a very airy vape down to a restricted DL vape, depending on how you adjust the airflow. Using the airflow ring with the single horizontal slot allows for the most restricted vape if you also close off the bottom airflow.

Building on the Widowmaker RTA

The Widowmaker has a dual coil, postless build deck. It uses small hex screws to secure the coils and there are shallow wick wells on either side of the deck. The center of the build deck has 36 holes that funnel air from the bottom airflow to the bottom of the coils for increased flavor.

With your legs trimmed, installing the coils is easy. Just drop them into the terminals with one leg on either side of the airflow holes. You want to make sure that your coils are as centered in the build deck as possible so that they don’t touch the inside of the chamber.

With your coils installed, the best way to wick is to fluff your cotton upwards. This ensures that the top juice flow holes will saturate the cotton evenly and efficiently. With my coils trimmed to 4mm and my cotton fluffed upwards, I never had any issues with dry hits or wicking. 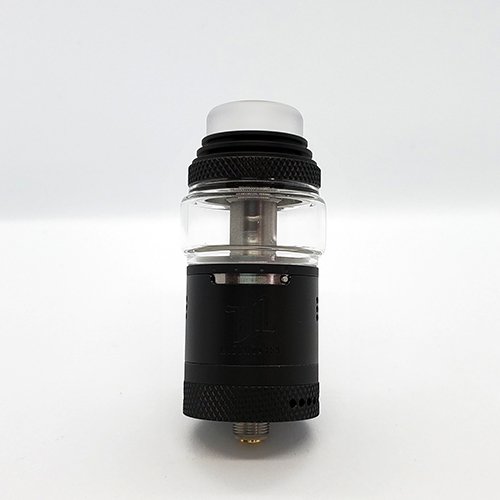 It took me a few tries to get the wicking and build right with this RTA. But once I figured out that 4mm leg length is better than 5mm and to fluff my cotton upwards, vaping with the Widowmaker RTA has been amazing.I used the included coils to build and vaping at 70-75W is a pleasant and warm vape.

I liked the 15 hole side airflow the best out of all the airflow options. I usually vaped with one row of holes closed and it’s a nice direct lung draw. The flavor is up there and so are the clouds. I like that this RTA wicks the coils from the top rather than the bottom as I haven’t had anything close to a dry hit or any issues wicking, even with 80VG ejuice.

Another plus to the Widowmaker RTA is that it’s been leak free. Even when I was experimenting with coil height and wicking, I never had a leak. The moving parts all fit flawlessly together to make a tight seal.

The tall nature of this RTA and the number of moving parts might be off-putting to some people but this is a great flavor RTA with tons of options for adjusting the airflow. There are three airflow rings to choose from and you can even adjust the bottom airflow control ring for extra fine-tuning. The juice flow control wasn’t very useful in my testing as I found it wicked fine fully open, but if you’re using a really thin ejuice I suppose it could come in handy.

If you don’t mind a tall tank, the Widowmaker RTA is highly recommended.