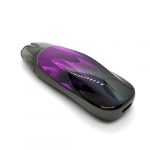 The ZERO 2 is the follow-up device to the Renova Zero that came out in mid-2018. It’s a small and simple pod device that uses refillable and replaceable pods with built-in coils. There are no settings to adjust, no airflow control, and no buttons. This simplicity makes it perfectly suited to beginner vapers, or for vapers who are looking for a simple device to take with them on-the-go.

Maybe you know this, maybe you don’t, but Renova is owned by Vaporesso. This sub-brand was created to show the evolution of Vaporesso and dedicated to perfecting the pod system. For whatever reason though, the brand didn’t last long and the Renova Zero was the first and only device ever produced under the brand.

Although Vaporesso may have given up on the Renova brand, they haven’t forgotten about the ZERO. The ZERO 2 has a 800mAh battery and comes with two 3ml pods: one 1.0Ω Mesh Pod, and one 1.3Ω ceramic CCELL Pod.

So is the ZERO 2 as good as it looks, or are you better off going with another pod system? Read on to find out. 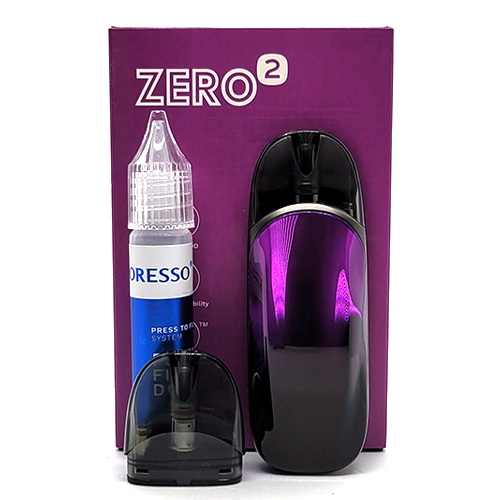 The ZERO 2 has the same elongated oval shape as the original ZERO, but it looks nowhere near as plain. The front shell is made of a combined 10 layers of special IML finish which is shaped to be streamlined and futuristic. The shape reminds me of the roofline of a sports car or a spaceship of some sort. Whatever it’s supposed to be, it’s a divisive design and you’ll either love it or hate it. I think that this raised shape makes the ZERO 2 look a bit too thick, but overall I still like how it looks.

Hidden under the front panel are 4 small arrow shaped LEDs. When you insert/remove the pod or take a draw, the LEDs appear to light up from deep within the device which is pretty cool. I particularly like how the LED’s light up in sequence when drawing on the device.

The back of the ZERO 2 isn’t as exciting as the front. There’s no fancy design or color. What you get is a grey metal shell that says VAPORESSO and ZERO 2. As a whole, this pod vape feels nice to hold and fits well in my hand. The build quality is pretty good, but I get a small click sound if I press down on the front panel. This happened from the time that I took it out of the box, but it has gotten slightly louder after I’ve dropped it a few times.

On the topic of dropping, the front panel hasn’t visibly cracked and there were a few hard falls. The only damage is a little scuffing and scratching on the back metal body and frame, but that’s to be expected.

That’s really all there is to the ZERO 2. It’s a very simple device and that can be either a pro or a con depending on what you’re looking for. On one hand, it’s very easy to use so beginners are going to have no problem with it. There are no buttons, no settings to adjust, no airflow to adjust. It’s draw activated so you just have to pull on the mouthpiece to vape, and the pods have the coils built in so you don’t need to change the coils.

On the other hand, this simplicity means that you can’t tailor the experience to exactly how you want. If you’re an experienced vaper who looks for a certain type of airflow and likes to adjust the wattage to your liking, the ZERO 2 isn’t going to do that.

The pods for the ZERO 2 are backwards compatible with the original ZERO and vice-versa. Two new pods come in the package: one 1.0Ω Mesh Pod and one 1.3Ω ceramic CCELL Pod. These pods have the coils built-in so you don’t have to worry about changing the coils. When the pod starts to taste funky/burnt you can just throw it out and use a new one.

Each pod fires at a slightly different wattage; the 1.0Ω pod will fire at 11W and the 1.3Ω pod at 9W. Each pod has a 3ml ejuice capacity. The pods attach magnetically to the device and its a secure fit. There is no pod wiggle at all even if I try my best to move it.

These pods have a light tint to them but it doesn’t affect visibility too much. Even in low light situations I can see my ejuice level. What’s great about this pod is that you can look at it from the side and check your remaining ejuice without having to remove it from the device.

The pods have a circular shape and are thin at the mouthpiece area. The way the pod slopes really makes it comfortable to draw on and I like that a lot. Filling is done through a push to fill (PTF) port on the bottom of the pod which means you do have to remove it from the device to fill it up.

The fill port is Vaporesso’s push-to-fill system. Basically you just push the port down with the nozzle of your ejuice bottle and this opens up the spring-loaded valve.  From there it’s straightforward filling as usual. This PTF system works well and it’s basically leak-proof. 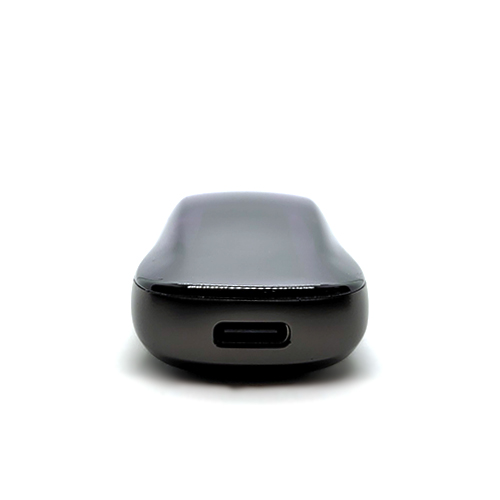 The battery on the ZERO 2 has been improved from the original and it now holds a 800mAh battery, up from 650mAh. The battery indicator is the 4 arrow LEDs that I mentioned earlier in this review. These light up when you insert or remove the pod, as well as when you take a draw. The number of lights indicates your charge level:

Although 800mAh isn’t a particularly large battery, it is decent for the size of the ZERO 2. Also, because it only works at 9/11W (depending on the pod that you use), it doesn’t use a lot of power. I get to vape about 2 pods of ejuice per charge and that’s somewhere around a day and a half to two days of usage time. Your usage time will vary of course, depending on how often you vape, but this is generally what you can expect.

Charging is done through a Type-C port on the bottom of the ZERO 2 and takes 45 minutes for a complete charge. 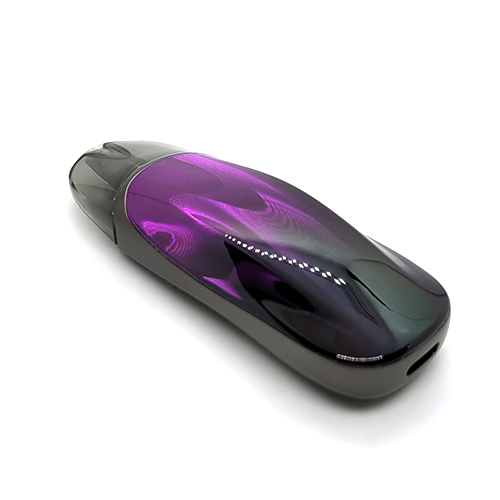 The 1.0Ω mesh pod can be differentiated from the 1.3Ω by looking at the bottom of the pod. The bottom of the 1.0Ω pod is red while the 1.3Ω is black. I used exclusively nicotine salt ejuices in the 25-35mg range with these pods, varying from 50/50 to 70VG.

The 1.0Ω mesh pod was by far my favorite out of the two. It hits just right with medium strength nic salts and the draw is nice and strong when the battery is above 30%. The draw gets a bit weaker when you’re in the 1 arrow battery life range so this was usually my queue to find a charger. Flavor is really good from this pod which was surprising given the resistance, but I really enjoyed it. While I didn’t have any wicking issues, I did have a very small amount of leaking with 50/50 ejuices. Not enough to pool in the device, but enough where the sides of my pod had ejuice on it when I pulled it out.

The 1.3Ω pod was the complete opposite experience. I really disliked every minute of using this pod. Even with the device fully charged it feels like it’s dead. The draw is just super weak. It’s a tight MTL draw that is not overly tight, but it feels like the vapor you would get if you had a complete lack of airflow. As a result, the flavor was extremely muted and my ejuices didn’t taste like much at all. The only positive to this coil is that it did not burn or give me dry hits, despite feeling like there was no airflow. Like the 1.0Ω pod, this pod also leaked a little with 50/50 ejuices.

The ZERO 2 with the 1.0Ω pod is a really great device. I think Vaporesso has really nailed it here when it comes to making a pod system that is just as easy to use as possible. This is a device that even a complete beginner to vaping will have no trouble using. All you have to do is push your ejuice bottle into the fill port to fill the pod and draw on the mouthpiece to vape. That’s it. There’s no other maintenance required and no other settings to adjust and wonder if you’re using it right.

The ZERO 2 just works and if that’s the type of device you want, it should be a top pick. The downside is that the 1.3Ω pod is just awful so make sure you purchase some extra 1.0Ω pods with the device.