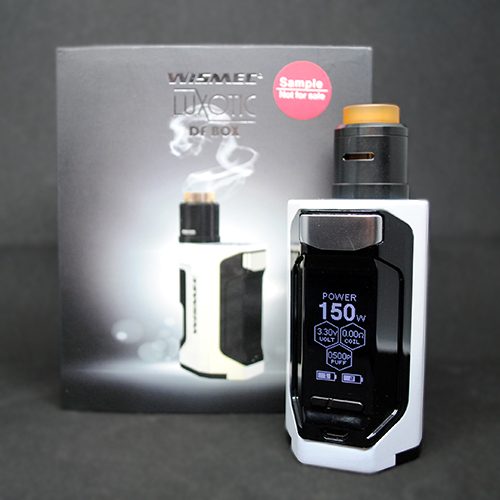 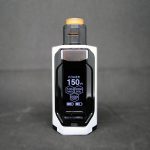 Wismec has released their first dual 18650 squonker — and it’s awesome.

How’s it going my fellow vapers? I’m back with another review, and today I’ve got my hands on the Wismec Luxotic DF Kit with Guillotine V2 RDA.

The Luxotic DF is a dual 18650 battery squonk mod that looks very similar to the Wismec RX Gen3, just without the JayBo branding. It’s packed with a bunch of features and also has a large OLED display.

Quite honestly, a dual 18650 squonker is something that Wismec should have done a long time ago. But as the saying goes, better late than never. I’ve spent some time getting to know the Luxotic DF & Guillotine V2 RDA. In this review, I’ll go everything you need to know about this kit. 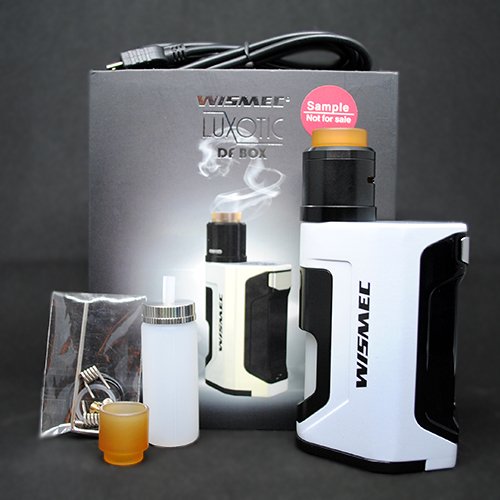 When you purchase the Luxotic DF Kit with Guillotine V2 RDA, you’ll get the following:

In total, you’re getting two squonk bottles in the box. One is already installed on the Luxotic DF, and you get a spare as well. You also get two drip tips. One is short and pre-installed on the Guillotine V2 RDA, while the other is a bit taller. 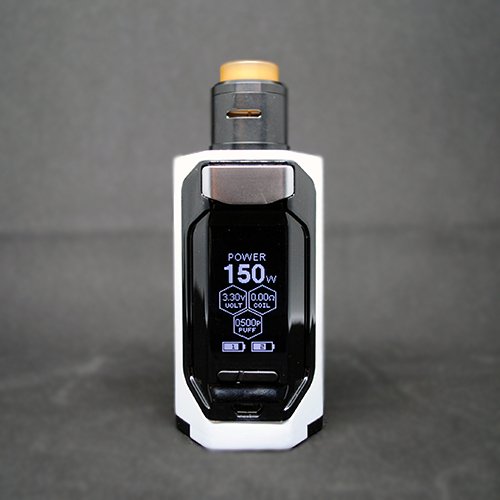 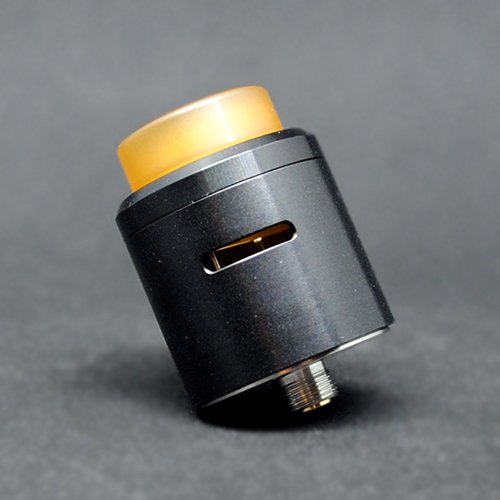 The Luxotic DF is a very nice looking mod, and looks almost identical to the RX Gen3. It looks and feels well-built, and is comfortable to hold in your hand. The Luxotic DF is available in four colors: black, green, blue, and white. The white one that I received for this review is especially nice, as it has a pearlescent finish that looks beautiful when the light hits it.

There’s Wismec branding on both sides of the Luxotic DF. Wismec Luxotic DF Box is also branded on the top of the mod, beside the 510 connector. The 510 connector is spring-loaded, and has a small hole in it for squonking.

On the front of the Luxotic DF is a large and crisp 1.3inch OLED screen. It’s very easy to read, and will display all of the vaping information you need. This screen takes up the entire front of the device, and looks just like the RX Gen3 Display. But I’ll go over the display features in detail in the Features & Functions section.

There are three buttons on the Luxotic DF: one large metal fire button, and two small adjustment buttons. The fire button is wide and positioned conveniently at the top of the device. With this placement, it’s easy to fire the device with either your index finger or your thumb. The fire button has a nice click to it, and is firm without any rattling.

On the other side of the device is the squonk bottle and cut-out. The squonk bottle will hold 7ml of ejuice which is great. It has a metal cap that feels very well-made, and the bottle itself is nice and squishy.

The door for the squonk bottle is attached magnetically, and can be pulled up and off. But in order to release the squonk bottle, you’ll have to first open the battery door. Next, loosen the bottle from the window, and then pull it out from the bottom. To replace the bottle, simply do the reverse.

It might sound complicated, but it’s actually very simple. The only problem is that you’re almost forced to remove your batteries every time that you want to refill. Something to keep in mind.

The Luxotic DF squonk mod takes dual, high-drain 18650 batteries to function. The battery compartment can be accessed at the bottom of the device, and features venting holes for safety. Simply slide the battery door forward to release it. This will allow you access to the squonk bottle as well.

The battery compartment on the Luxotic DF is well-machined, and works without complaint. It’s not too tight, and I didn’t experience any snagging or ripping. That’s always a good thing in my books.

Overall, the design and build quality of the Luxotic DF squonk mod are top notch. The RX Gen3 design is one that thousands of vapers have come to love, so I’m glad that they rebirthed it in squonk form. The buttons work well, and the display is bright and crisp. There’s not much to complain about in this department. 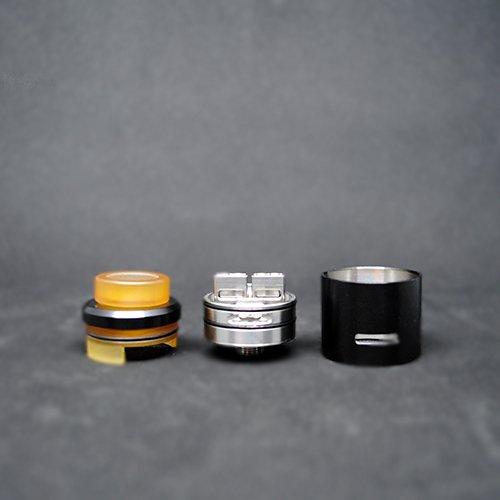 Interestingly, the Guillotine V2 RDA can be used in multiple ways. First, it can be used as a bottom airflow RDA. There are cutouts in the deck that lead directly underneath the coil, and you can get some decent flavor.

But you also have the option of removing the top cap, flipping the mid cap upside down, and using the Guillotine as a top airflow RDA! I thought that this way very cool, as it gives you multiple ways to find what you like best.

The only thing is that the top cap on the Guillotine is very small and thin. It also doesn’t have any knurling. This makes it nearly impossible to grip and adjust the airflow when you have it in top airflow mode, so make sure you set your airflow how you want when replacing the top cap.

The top cap of the Guillotine is insulated to keep it cool. However, I didn’t really feel a benefit. The top cap still got extremely hot.

The build deck is “guillotine” styled, and features two terminals that clamp down on your posts. When building, be careful not to loosen the negative post. If you’re too rough, it will dislodge and cause a short. If you do loosen it or encounter problems, simply tighten the screw on the bottom of the atomizer.

The juice well on this RDA is very deep, and will afford you some room to drip and squonk without worry of flooding or leaking. All-in-all, a nice design. I like the ability to flip the airflow, but we’ll see how it performs a bit later. 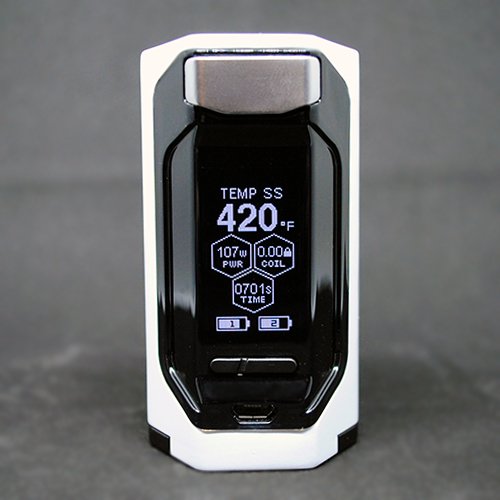 The Wismec Luxotic DF is a dual 18650 battery squonk mod that is powered by the Avatar chipset. To turn the device on or off, quickly click the fire button five times.

By default, the screen will display your current wattage in large numbers at the top of the screen. Below your wattage are three hexagons with information: voltage, coil resistance, and amperage. This last readout can be also be changed to a puff counter or total puff time.

The Most interesting feature, however, is the ability to flip your display upside down. When the device is turned off, hold the – and + adjustment buttons together. This will flip the display upside down. I can see this being useful if you want to see your puff time while you vape, but it’s still kind of useless. Interesting for sure, though.

Building on the Guillotine V2 RDA

While I want to say that building on the Guillotine is a piece of cake, it was mildly frustrating. In order to build two coils onto it, you have to use a coiling rod of some sort to hold them in place as you secure the clamps. Otherwise, your coils will be misaligned and badly positioned.

Also, you have to be careful not to be too rough. If you are, it will loosen the negative terminal, and cause shorting. If you do this, make sure your terminal is back in place, and tighten the screw on the bottom of the tank.

Overall, I wish that the posts were positioned opposite from each other, and that this was a single coil RDA. Building can be a little frustrating, and I would not suggest this to someone looking for their first RDA.

When it comes to vaping performance, the Luxotic DF is a great squonk mod to use. I used multiple coils at varying resistances in the Guillotine V2 RDA, and was hitting it at 60-120W. This mod fires near instantly, and coupled with the Guillotine it was a rather pleasant experience.

On the topic of battery efficiency, I found the Luxotic DF to be pretty good. When I was hitting it at over 100W, I found that my batteries would be dead by the end of the day. However, when hitting it at something more reasonable like 60W with a higher resistance coil, I got a fair bit more vaping time out of this kit.

As for temperature control mode, the performance of the Luxotic DF really impressed me. It cutoff at the right temperatures to protect the coil, and I was getting a nice warm vape without any burning. Just like a TC mod should perform. Just remember to lock your resistance! 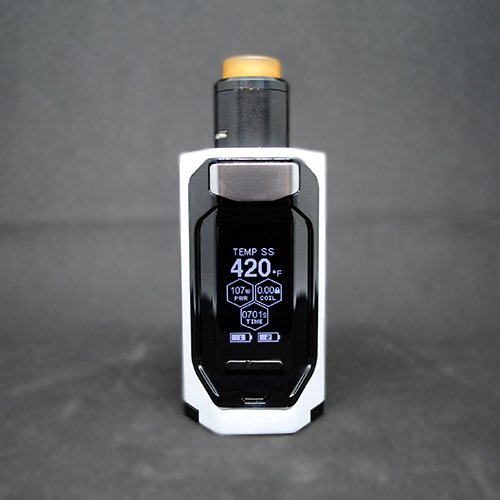 So what’s the verdict? The Luxotic DF is a solid regulated squonk mod that looks great, with performance to match. The ability to fire at up to 200W is awesome, and the temperature control mode works great as well. The ergonomic shape is nice to hold in your hand, and the battery efficiency will mean an all day vape at lower wattages.

The included Guillotine V2 RDA is decent, and allows you to experiment with different types of airflows to find the way you like. So if you’re looking for a new dual 18650 squonker that isn’t too expensive, check out the Luxotic DF kit.