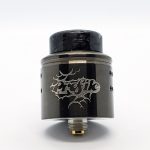 Wotofo have once again teamed up with Mr.JustRight1 to create the Wotofo Profile 1.5 RDA. It has a new airflow design and a larger build deck for easier building and better flavor.

The first Profile was a game changer for mesh coils and the Profile 1.5 has some improvements to make it even better. The top cap has been thinned out to allow more room for the build deck. It now has bigger clamps and a larger center support. It also comes with larger mesh strips than the original. Wotofo have even done away with the honeycomb style airflow in favor of two rows of airflow holes.

Is the Wotofo Profile 1.5 the new king of mesh RDAs? Keep reading to find out.

This RDA was sent to me by Wotofo for the purpose of this review. 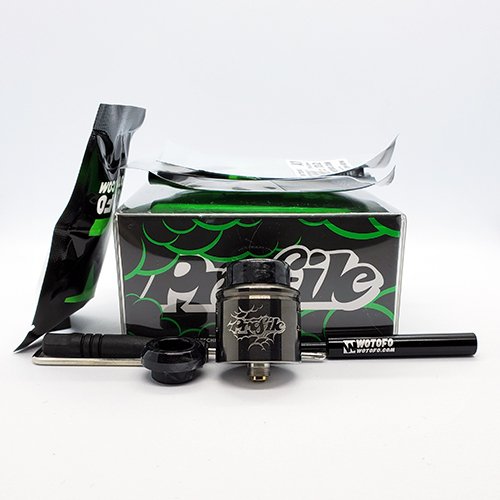 On first glance, the Profile 1.5 doesn’t look that different from the original. It’s the same 24mm size and has a similar look, but when I look more closely I can see the differences.

Wotofo have removed the gap between the top cap and the body so the Profile 1.5 is about 1mm shorter than the original. The logo on the Profile 1.5 has been given a slight change too but it’s more or less the same.

Build quality on this RDA is superb. The logo and airflow holes are cleanly machined and there are no imperfections to speak of on the body. Everything fits together like a breeze. The build deck and clamps are similarly perfect.

I received the gunmetal color for this review and the paint quality is just as good as the original. If gunmetal isn’t your color, the Profile also comes in stainless steel, black, blue, gold and rainbow.

The Profile 1.5 has one O-ring to secure the body cap as opposed to the two on the original. It holds the cap on firmly but it’s still smooth and easy to remove. The body cap locks on the build deck and doesn’t spin freely.

Wotofo include two drip tips in the package: a standard resin 810 and a low profile 810 drip tip. They’re really nice drip tips and the resin matches the color of the tank.

The standard 810 is just like the one on the Profile. It’s thick and rounded and tall enough to keep my lips away from the top cap. I haven’t used the low profile drip tip too much because it’s too short for my liking but I can appreciate that they included it. Wotofo have done away with the honeycomb airflow from the first Profile and replaced it with two rows of five holes on each side. These holes are considerably larger than the airflow holes on the original so even though there are less of them, it works out to be the same amount of airflow.

The airflow can be adjusted by turning the top cap. It’s easy to adjust and turns smoothly without too much effort. You can close off the top row of holes and if you keep turning, the bottom row of holes will start to close off as well.

If you keep turning the top cap when both rows are closed then you’ll start to open both the top and bottom rows at the same time. This allows you to adjust the airflow horizontally to open one side of the airflow. I found this to be the least useful adjustment of the three because there’s no benefit to the airflow only hitting half of the mesh.

Vaping with both rows open is an extremely airy vape; it’s much too much airflow. It also severely mutes the flavor of my ejuices. When I look at the deck I can see why; the top row of airflow holes sits high above the mesh and doesn’t angle down so it bypasses the mesh completely.

Closing off the top row of airflow holes is perfect. There’s a bit of restriction and the taste is definitely there. The bottom row is aligned perfectly with the mesh so it makes sense that this gives the best performance.

The Profile 1.5 is the same 24mm diameter as the Profile so to create more space, Wotofo thinned out the top cap. I prefer this new, roomier build deck over the old one because it’s easier to manoeuvre and build on.

The clamps aren’t spring loaded but they still open easily once you loosen the screws. The screws are combo Phillips head / Flathead screws and the included screwdriver works like a charm.

The center block has the squonk hole in the middle of it and it has channels to allow the ejuice to escape to the sides of the deck. This is good design because it ensures that ejuice can get to your wicks even with the cotton pressed up tightly against it.

The center block is spring loaded and pushes up on the cotton to ensure full contact with the mesh. This has worked excellently in my testing and kept the cotton fully touching the mesh even when it’s heavily saturated.

The Profile 1.5 can be used with regular coils but that’s not its strong suit. For regular coils there are much better options so I’m sticking with mesh only for this review.

Building & Wicking on the Profile 1.5 RDA

Building on the Profile 1.5 is much like any other mesh RDA and exactly like building on the first Profile. But for those of you who don’t know the process, I’ll break it down for you.

You’ll want to start by loosening the screws but don’t loosen them too much. Just a little will be enough to create a gap that the mesh can fit in. Then you’ll want to take the included coil shaping tool (the black rod) and curve the mesh around the thick end of the rod. You have to be careful not to crease or kink the mesh. We’re going for a smooth semi-circle.

With the mesh shaped, carefully place it into the clamps. You want the mesh to be as even as possible and not tilted off to one side. With your mesh leveled, tighten down the screws.

It’s a good idea to dry burn it at around 15W to make sure that it glows evenly and also to burn off any residue from your fingers. Fire the mesh until it starts to glow but not any longer. If it’s not glowing evenly, strum the mesh lightly with a pair of ceramic tweezers.

Take a piece of the cotton included in the box and roll it into a circular strip. When threading it under the mesh you want to push down on the center block at the same time. Thread the cotton through and pull it back just a little to make sure that it sits snugly.

Trim the cotton on an angle so that it looks like a bow tie. A couple mm from the edge of the deck is the perfect length. Tuck your wicks neatly into the build deck and you’re ready to juice the cotton up. Drop some e-juice directly on the top of the mesh as well onto the edges of your wicks. Once it’s fully saturated you’re ready to vape. 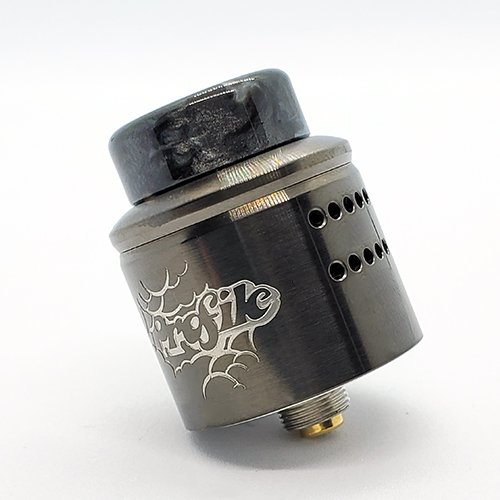 The Profile 1.5 comes with three mesh strips. I tested all three:

The three strips are all different types of mesh. The Chill is a spaced out honeycomb mesh, the Turbo is a grid mesh and the Extreme is a fine mesh. According to Wotofo, these are each supposed to provide different levels of flavor and warmth and they do. But they aren’t radically different from each other and I found them to be more similar than they are different.

The nexMesh Chill is a slightly cooler vape and it provides the least flavor of the three mesh strips. However, it’s still just as good as the flavor I got from the original Profile. The nexMesh Turbo is a warmer vape and provides better flavor than the Chill. The nexMesh Extreme is just as warm as the Turbo and the flavor is comparable as well. It might be just a bit better but it’s hard to tell.

Although all three mesh strips are rated for 60-80W, you can push the Turbo and the Extreme all the way up to 100W if your wicking is good. I managed 5 draws at 100W before it started to taste dry but I never had a dry hit. The vapor is very warm at 100W though and I prefer to vape these mesh coils at 90W.

I mentioned this earlier in the airflow section but the airflow configuration makes a huge difference to the flavor. The best way to vape on the Profile 1.5 is with the top airflow closed and the bottom row open. Anything else results in muted flavor that doesn’t reflect this RDAs true capabilities.

Whether squonking or dripping, it’s a great tank. The drip tip is wide enough to drip straight down. Squonking also works wonderfully because the channels in the center block distribute ejuice straight under the coil as well as to the edges of the deck.

The Profile is a hard RDA to follow up on but Wotofo have done everything right with the Profile 1.5 RDA. It retains everything that made the original so good while tweaking and changing a few things to make it even better. The larger build deck is a welcome change and I even like the new airflow better.

There aren’t many other RDAs that can compete with this type of flavor and off the top of my head it’s hard to think of one that can. Whether you’re into mesh RDAs or just looking to get started with them, the Profile 1.5 is highly recommended.