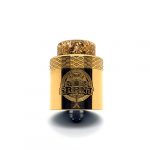 There aren’t enough rebuildable tanks being released these days, so you can imagine my excitement when I heard that Wotofo was releasing a new RDA. It’s the SRPNT RDA, which is meant to be an upgrade to the Serpent BF RDA of 2017. However, this RDA is completely changed from the original.

The SRPNT RDA is a 24mm tank and, in traditional Wotofo style, it comes with all of the materials that you need to build on it. This RDA is designed to work just as well with a large single coil as it is with a dual coil build, and as such Wotofo includes a 5mm ID coil and dual 3mm ID coils in the box (you also get cotton that is appropriately sized for the coils).

This RDA has me really excited for a few reasons. One, because it has a lot of possible airflow configurations and two, because the deck looks really great.

This RDA was sent to me by Wotofo for the purpose of this review. 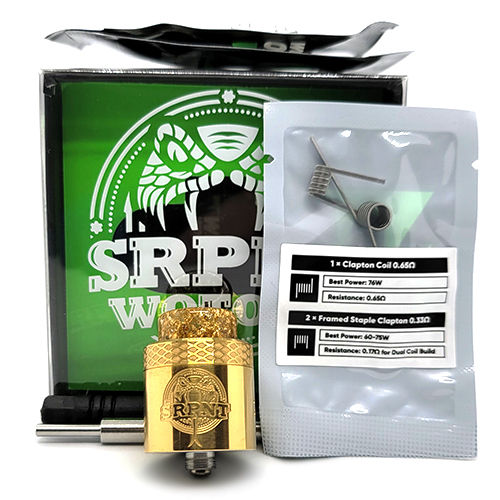 Right off the bat, the design immediately stuck out to me. While the SRPNT’s general form looks like what you would expect an RDA to look like, the details are what caught my eye.

The most prominent feature is the logo. It’s a snake (maybe a rattlesnake? I’m no snake expert) with its fangs barred and tongue sticking out, along with the words SRPNT, all surrounded by a circle. The way it’s engraved and the detail of the engraving is top notch.

Another noticeably nice detail is the snakeskin pattern engraving on the side of the top cap. At first I couldn’t figure out how to describe it, but then it dawned on me that it was a snakeskin pattern and it all made sense. That’s a nice detail that ties in with the theme of this RDA for sure.

For the tech specs, this is a 24mm diameter RDA so it should fit on most dual and even single battery mods without overhang. It’s made of stainless steel and consists of four parts: the drip tip, the top cap, the body cap, and the build deck.

It’s available in six colors, including a rainbow finish, and each one comes with a different color drip tip that matches or accents the color of the body. The drip tip on my gold unit is clear resin with gold flakes and it looks incredible. It’s also very comfortable to use. The drip tip is an 810 and it is removable and interchangeable with any other 810 drip tips you may have at home.

The body cap fits on to the build deck and locks into place by way of two notches on the side of the deck. This prevents the body cap from spinning.

There are 4 circular airflow holes on each side of the body, arranged in two rows of two holes. The top cap has a series of different sized holes cut into it that align with the holes on the body cap, giving you the option of many different airflow setups.

As you can see, there is a good variation of airflow setups. I had a lot of fun testing out the different settings with the two included coil setups and I’ll elaborate more in the performance section.

After lubricating the o-rings with a little ejuice, everything turns smoothly and without too much effort. All of the pieces fit together nicely and smoothly too. The build quality is no question top notch and just as I would expect from a company such as Wotofo.

The build deck on the SRPNT is made to accommodate either single, large oversized coil builds or dual coil builds just the same. In the box with the SRPNT Wotofo provides a 5mm ID coil and two 3mm ID coils so you can test them out and get a feel for the RDA with both set ups.

The build deck has four posts which are secured by small but sturdy Phillip’s head screws. On each side of the build deck you’ll find two posts with a block between them. This block has 4 airflow holes which means that airflow gets directed straight to your coil(s).

Building on the deck is very easy and painless. The fact that Wotofo includes the coils and the appropriately sized cotton for the coils is super. You also get a coiling rod that you can use to build coils to either 3mm or 5mm ID’s — the perfect sizes for this deck.

Start by loosening the screws on the posts. If you’re building a single coil you can loosen up two screws that are diagonal from each other on the build deck. If building dual coils then you’ll want to loosen up all four. From here you can insert your coil; I used the coiling rod to help position my coils appropriately. For the single coil you want it right in the center of the deck. For the dual coils you want them to be closer to the posts.

When the coil cools down you can move on to wicking. This build deck makes wicking effortless. Take the appropriately sized cotton (5mm thick for a single coil and 3mm thick for the dual coils) and thread it through.

Center your cotton on the coil and then cut a little beyond the edge of the build deck. From here you can tuck the cotton into the build deck and you’re ready to prime the coil with some ejuice. Soak the cotton well with your preferred juice and leave it to saturate for a few minutes before you start vaping. 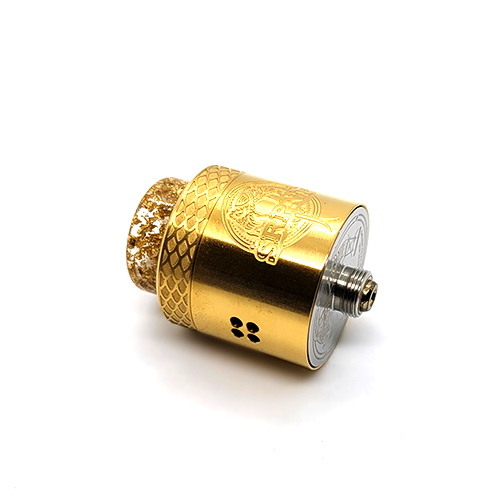 As I’ve mentioned before, the SRPNT is designed to work with either a single large oversized coil or smaller dual coils. As such, Wotofo includes a 5mm ID dual core fused clapton and two 3mm ID framed staple claptons in the box. I, of course, tested out both of these builds.

The box and website says that the 5mm ID single coil is supposed to come out to a resistance of 0.65Ω but it came out to 0.38Ω for me on multiple different mods. I used a few 6mg ejuices at 65W and it’s a heavenly vape. For this coil I alternated between the four 1.9mm holes and the four 1.6mm holes as I found anything with less airflow would mute the flavor. However, even with all four holes open it’s not an extremely airy draw. It’s more of a slightly restricted DL draw which I like.

At 65W it’s a very warm vape and the flavor is extremely powerful. I also got some very large clouds out of this single coil setup. Very infrequently I got a small amount of spitback, but most of the time it was fine.

The 3mm ID dual framed staple clapton’s performed even better than the single coil. I kept these running at 75W because anything lower felt underpowered (the recommended wattage range is 60-75W). 75W is the perfect wattage for these coils and gets me a nice mix of flavor and vapor warmth, as well as massive clouds. At this wattage I did not get any sort of spitback and the coils had no trouble wicking and vaporizing my ejuice right after dripping.

This coil setup feels a bit more restricted on the airflow than the single coil setup so the four 1.9mm holes felt like the best airflow for me personally.

Squonking with this RDA is good but there is nothing special going on with it. The hollow 510 pin replaces the solid pin in the bottom of the RDA and this allows ejuice to soak into the bottom of the deck. As long as your wicks are long enough to be touching the floor of the build deck (which they should be) then you won’t have any issues with squonking. Again, just a straightforward squonking setup and nothing new or interesting.

I’m happy to say that this new RDA is one that is actually very good. The SRPNT RDA is one that is slightly better with your traditional dual coil setups, but it does surprisingly well with just a single oversized coil too. Flavor is very good; good enough to replace a few of my other dual coil RDAs. The airflow setup, while simple, is really well done and directs airflow straight to the coils in a way that maximizes flavor and allows for large clouds as well.

In addition to the performance, the design is just nice. There’s a lot of detail in the design and this is complemented by the excellent build quality. It looks like RDA’s aren’t finished just yet.

Have you used the SRPNT RDA? Chime in with your thoughts by leaving a comment down below.